Development continues on Doomzone updates, with new features and cosmetics.

With the new version of Doomzone being well enough into development, I figured now is a good time to share with you some of the news. Doomzone is a living, breathing project, with no specific end-goal in mind. That being said, I'm always coming back to update it either as new features become available within GZDoom, or if I just get bored. This time around, I'll be primarily focusing on what's done, and talk a little bit about what I've got planned.

Doomzone has long featured some passive skills with its player classes, with Marksman cloaking when crouched, Tactician always starting with a full automap, and Mercenary even trumping that with full scanner functionality. But, there was some bit of criticism, stating that the classes felt a little bit samey, with much of their arsenals being similar to each other. So, I figured it was time to add active skills to the mix.

Active skills require user input to activate the skill. Player classes that have available active skills will show an icon with a basic idea of what that skill does, just above the HP and Armor section. To make this information easily available and reduce clutter, the HUD has been slightly tweaked to accommodate. Note the changed placement of acquired keys. 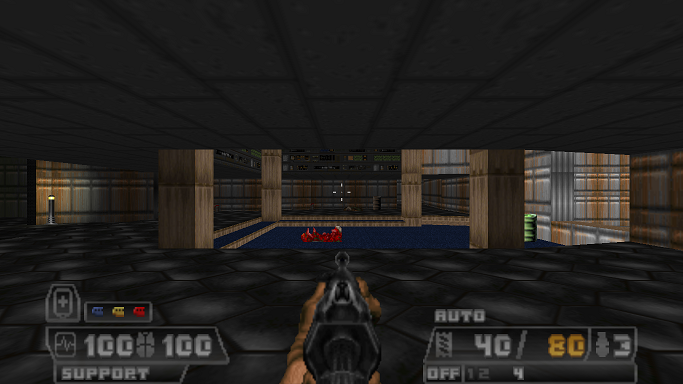 Contrary to most other equipment you're able to use, active skills do not require any ammunition to use. Pressing the active skill key (default: Mouse3) will activate it, and the skill will then be placed on cooldown, where the skill will appear grayed out on the HUD. The cooldown time for will vary, depending on the skill. Players are not able to change their active skills - they are assigned via class, and not every class is planned to have them (at this time).

Fulfilling her supporting role, the Support class will be able to throw Medikits either to allies or for herself. These are your standard Medikits that you would ordinarily find in the field, and are not dependent on your currently held Porta-Kits. The cooldown for this skill is 30 seconds after activation.

Primarily, this skill was designed for co-op, but it is also available both in single player and deathmatch. It should give Support a little more sustainability against the demon hordes - Not that she had many issues while wielding the Arc Rifle.

In the next update, Gunner will provide more of an Engineer's role, as he will be able to place automatic Sentry Turrets! These turrets, while stationary, will track and automatically attack nearby targets. Sentry Turrets are armed with two armaments: Two fully automatic machine guns, and an anti-air missile for airborne targets (not including Lost Souls). These turrets have a lifespan of three minutes, and will self-destruct either after the timer expires or if the player dies. While they don't do a large amount of damage when they are destroyed, it is still recommended to keep a safe distance when they are under attack.

This skill has a cooldown time of 60 seconds. Generally speaking, the player won't be able to have more than three turrets set at a time. Incidentally, they aren't particularly sturdy, only having around 300 HP.

While the Tactician has always been a bit of a "jack of all trades" class, he receives a specialty in the way of being able to summon reinforcements with the Spawn Grenade. Throwing a Spawn Grenade will immediately spawn a friendly marine to help you take down the hordes, while also having a 1/20 chance of spawning additional friendlies every second. Spawn Grenades will allow reinforcements to teleport in for 60 seconds, but your allies will teleport away to other assignments after three minutes. Make sure you use the Spawn Grenade in a wide open area, or your reinforcements won't be able to spawn in!

The type of reinforcements you receive is randomly determined from a list of seven classes: Support, Gunner, Tactician, Demolition, Marksman, Recon, and Heavy. Each will bring their starting weapon to the fight, save for Heavy, who is equipped with the VC-9 Rocket Launcher. These friendlies are not able to use active skills, however, and are only available to provide suppressing fire.

Spawn Grenades have a cooldown time of 120 seconds, due to the amount of firepower they are capable of bringing.

To bring some more life into the mod, I've added some additional player skins for the Support, Tactician, Demolition, and Marksman classes. As you can no doubt see from the Tactician's Active Skill footage, the friendly AIs utilize these skins. And while not every class has their own unique voice, I have added some additional class voices to add some variation to the mod.

If you're bummed that you won't hear the OG Doomguy voice anymore, don't be. Only UAC Elite gets to sound like Doomguy. Changing Doomguy's voice just feels... Wrong. 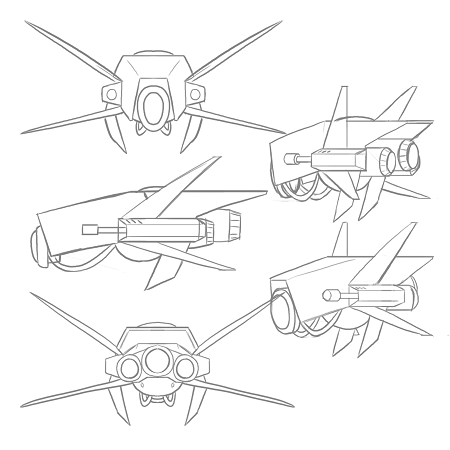 Before I conclude this article, I'd like to mention the Sentry Drone. While still in the conceptual phase, the drone will function much like a mobile, airborne Sentry Turret, armed with dual machine guns. It will be only lightly armored, but still heavily aggressive.

The artwork here is provided by the always awesome artist and personal friend, Derrick Drysdale, who also produced the logo for Doomzone.

So far, this is all I have to report at the moment on Doomzone's development. I don't currently have an ETA for the v1.7 update, as there are plenty more active skills I've yet to develop. But, hopefully, this information will sate your appetite for new tools of destruction! I'll be releasing new information as it becomes available.

Lastly, there is one request I'd like to make. If for any reason Doomzone crashes on you, or if you just can't get it to work, please PM me a crash log and the steps to reproduce the problem. I'm not experiencing any issues, but I know a few people are, and I'd genuinely like to provide a better mod for you. But I can't do much without the necessary information, so please send it my way when it's available. Thanks!

all of these are great ideas, keep up the good work sir!

Unfortunately, yeah, this is a bit of a problem with randomizer mods. I'm hoping that by adding active skills, this will help the player overcome this obstacle.

Lately, I've been testing Doomzone with a map pack called Dissolution. Normally, the maps are almost unplayable due to the weapon spawns being randomized, but active skills have been critical in completing the maps with little issue. There is still much work to be done, though.