A small talk about a planned overhaul of the Kane's Wrath AI to better suit the playstyle of the mod. 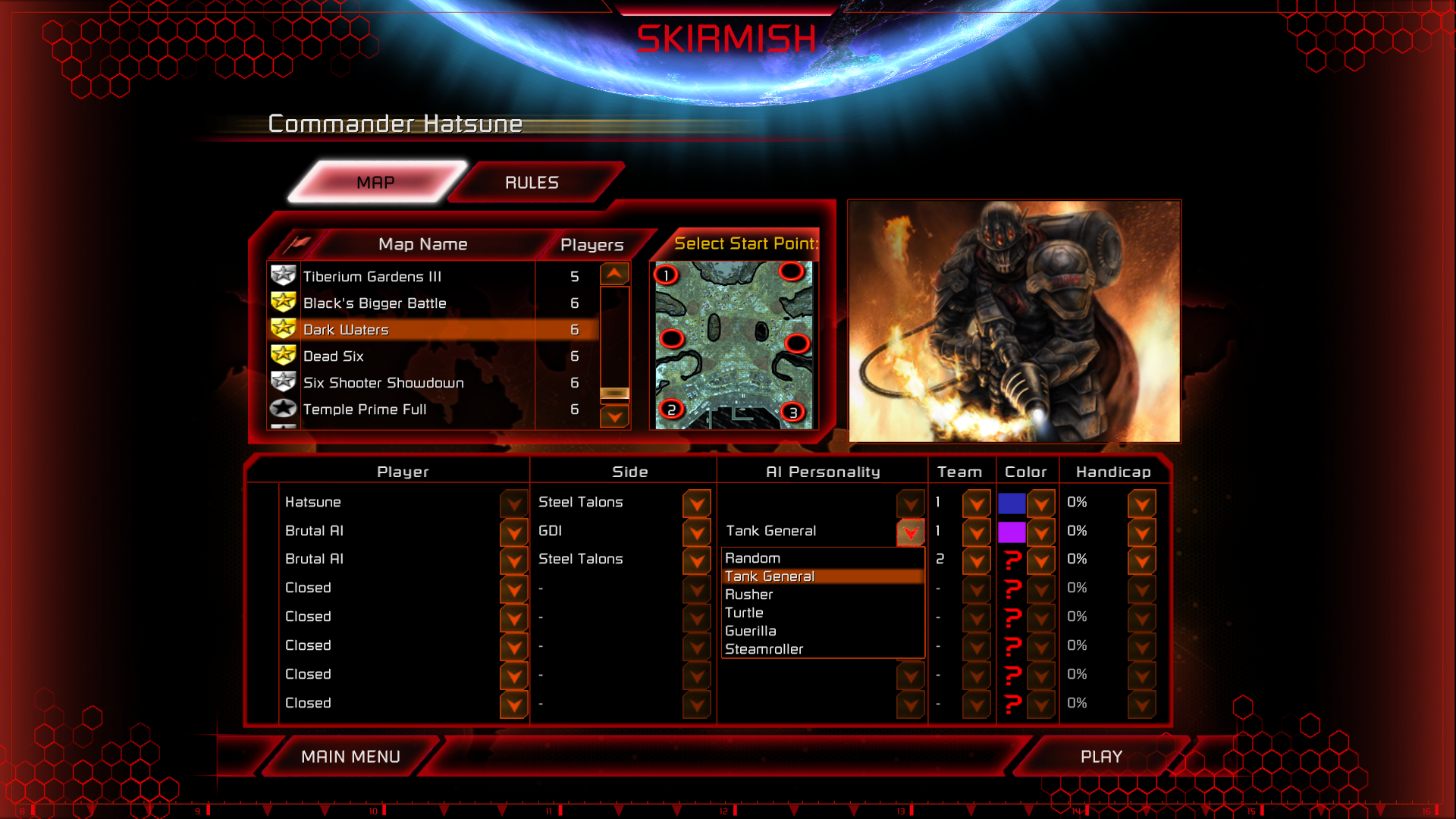 Hi everyone! Long time since I've done an Article / Blogpost for Tiberium Dusk but here I go.

In Tiberium Dusk 1.26 I aim to implement several new AI personalities that completely replace the personalities of the base game and that better fit the gameplay of the mod. One of the personalities, the "Tank General" has already been implemented for GDI as a testbed and work will be done to produce a similar AI for the other nations.

Below are the new personalities I aim to provide for the next update:

The Tank General is in his name, an AI that specialises purely in heavily armored warfare. This General will take one of 4 "starting tactics", these are:

Steamroller: Steamroller is play where the AI focuses on getting as many resources and factories running at the start, this leaves him with a reasonably large period where he is vulnerable as he focuses on macro rather than attacking the enemy; however, let this AI get up to strength and he will be relentless, taking over the entire map with expansions and sending units everywhere.

Rusher: The rusher aims to pump out tanks very early and establish an early tech tree, up to the command post. Expect decent resistance at the beginning of the battle, making him hard to kill by rushing tactics unlike the Steamroller.

Tech: The tech aims to climb the tech tree to deploy only the strongest of weaponry. The tech AI dislikes using cheaper units so you can use this to your advantage.

Standard: The standard is a tank general that accepts infantry into his ranks, and aims to establish early dominance by doing all of the above... but being more of a jack of all trades rather than any particular focus.

These tactics are chosen by the AI at the beginning of the battle, and cannot be changed by the player.

The Infantry General will be much the same, but he has not been implemented yet. His main focus will be on deploying swarms of infantry to defeat players, but with different "tactics" that he employs to be victorious.

Defense General will focus purely on defensive gameplay, aiming to wear down the opponent by war of attrition. Similar to the Turtle, however the Defense AI will aim to make better use of turrets as the Turtle AI is rather useless at deploying them effectively.

Special Ops General will focus on superweapons development and alternate tactics to defeat his enemies. These include bombing / targetting of key structures, use of support powers and various other means to achieve victory.

The Psycho General is a type which will try and win "at all costs", even if the idea is stupid. This will be the AI that offers the most heavy resistance, to the point that it will bankrupt itself to achieve this. I aim for this AI to have a strong balance of defence and offense as well as its "win at all costs" behaviour.

Each of the above General types will have sets of "tactics" much like the already finished (for GDI) Tank General. This means that every battle should be a different engagement in some way. :P

Cheers to everyone that's been tagging along with this, 1.26 is gonna be a massive update and I'd feel wrong releasing it with a half-baked Kane's Wrath AI that can't use most of the new units; so this AI development is pretty much necessary at this point. :)

Yup. One Facet of the AI is that whilst I have modified them to play more smart, they do cheat and more then they used to.

For one thing, I've removed most of the "stunting" modifiers to the easier AI's so they react faster and easy AI's finally repair buildings, I've changed the focus on what units the AI likes to prioritise (so far, depending on what type you choose)... and I've also given it the ability to make more "teams" to attack you with.

But the one major change? Bumping up the economy. The Kane's Wrath Economy / Heuristics system worked really badly in v1.02 Kane's Wrath as it is, as the AI was built around earning 2400 (iirc) credits per Tiberium Load and the cheap refineries and harvesters.

What I've tweaked basically is, rather than the 2x modifier to brutals, it now has a higher modifier of around 3-4x, slightly higher for hard AI too at around 2x (making them the new "brutal").


The "Brutal" in the mod now though is a truly psychotic AI that will test anyone's skills in a complete and utter beat-down. There's no shame in losing to an enemy that pulls out every stop and basically cheats to win. ;)

Oooof. Work on my new AI types has been going really well, so far for GDI anyway. It takes a while because I have to develop it for each faction, but a GDI Brutal is pretty much too strong for human players to deal with.

Brutal is now pretty much a "co-op" mode AI, in which 2 players would likely be needed to defeat it. Hard AI is the old Brutal.

Medium and Easy have some buffs to be more competent too. ^^