Creating new concepts is always difficult, especially as we always give Tolkien and his books an important role. We show you how Tolkien influenced the map, even before we started the manual work on it.

Creating new concepts for Edain means paying attention to lots of different things. Gameplay, enjoyment and balance always play an important role, not to mention J.R.R. Tolkien's books.
Quite often, a lot of the thoughts that go into creating something new are lost on many players - so today we wanted to take one of our new maps to go deep and give you an example of how we interpret Tolkien's works. 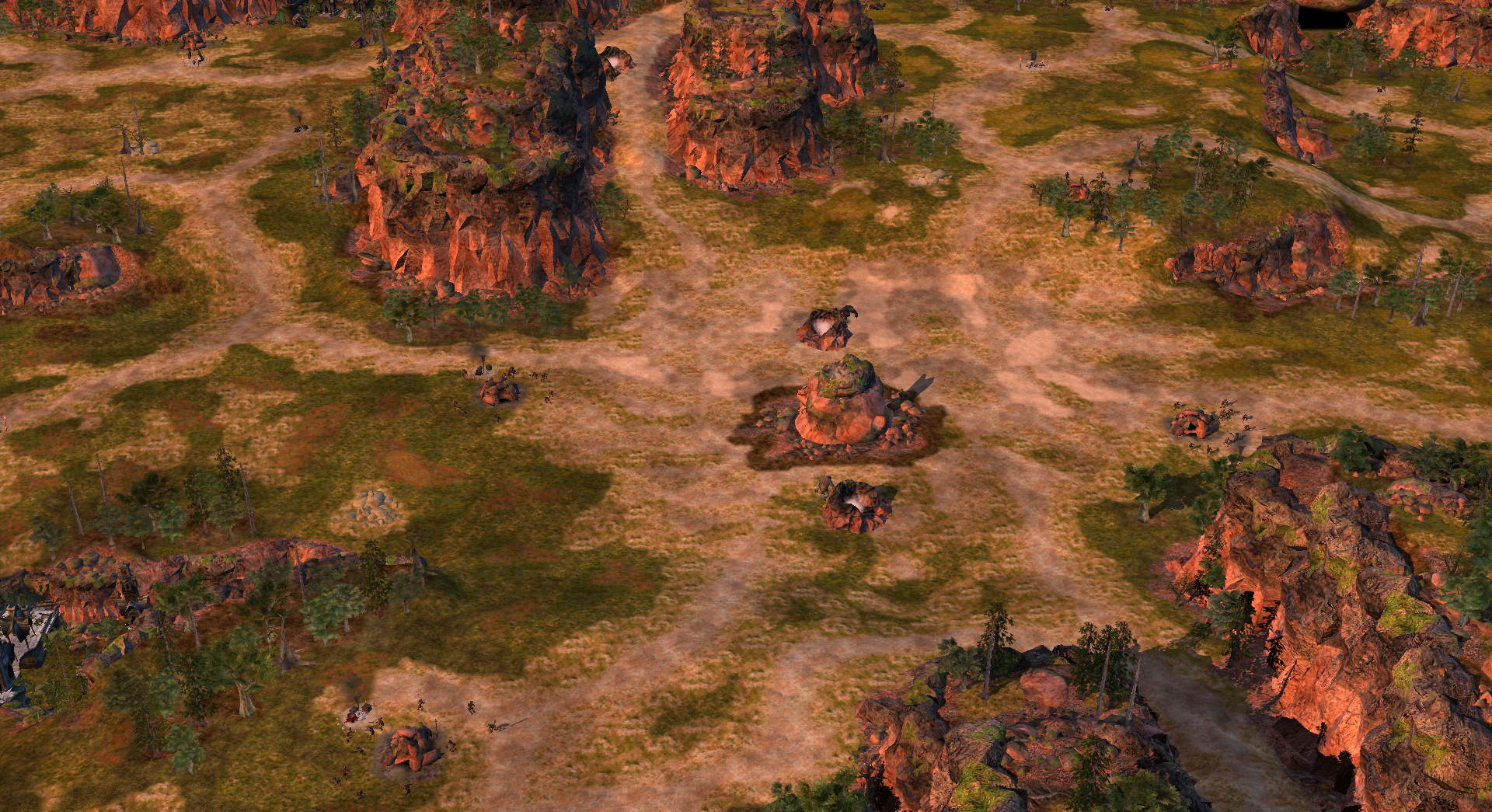 The Orocarni are rarely mentioned directly in the Lord of the Rings, but there are many nuggets of knowledge about them spread throughout the books.

Orocarni is one of the new 8-player maps we added this year. Looking at it, several big differences to other maps are immediately recognisable. But how did we end up with the final design?

One of the largest mountain ranges in Middle-Earth, the Orocarni are often connected to the land of Rhûn, which is also located in the east. However, our image of Rhûn is usually dominated by the area around the Sea of Rhûn. But there are still vast regions past that, and the distance from the Sea of Rhûn to the Orocarni is about as large as its distance to the Misty Mountains, which again is about as large as the distance from there to the Ered Luin (west of the Shire). Landscapes can change significantly over such wide spaces, as you all know. 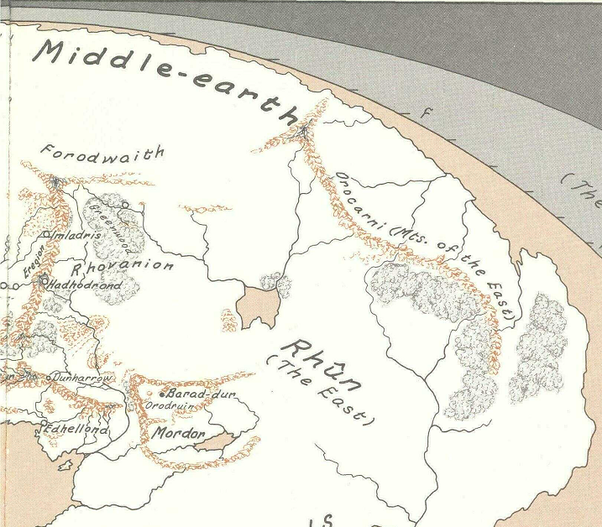 This means that not all characteristics of Rhûn's design need to be applied to the Orocarni. We need to put a little more thought into the looks of these mountains.

So what do we actually know about the Orocarni?

They were first mentioned in the First Age - the Elves first awoke at the eastern shores of of the inland sea of Helcar, at the feet of the Orocarni. Large forests were dominating the landscape. But after the sea dried up, we can't be sure how many trees survived into the Third Age.
It was also speculated that some of the Dwarven Clans found their home in these mountains. 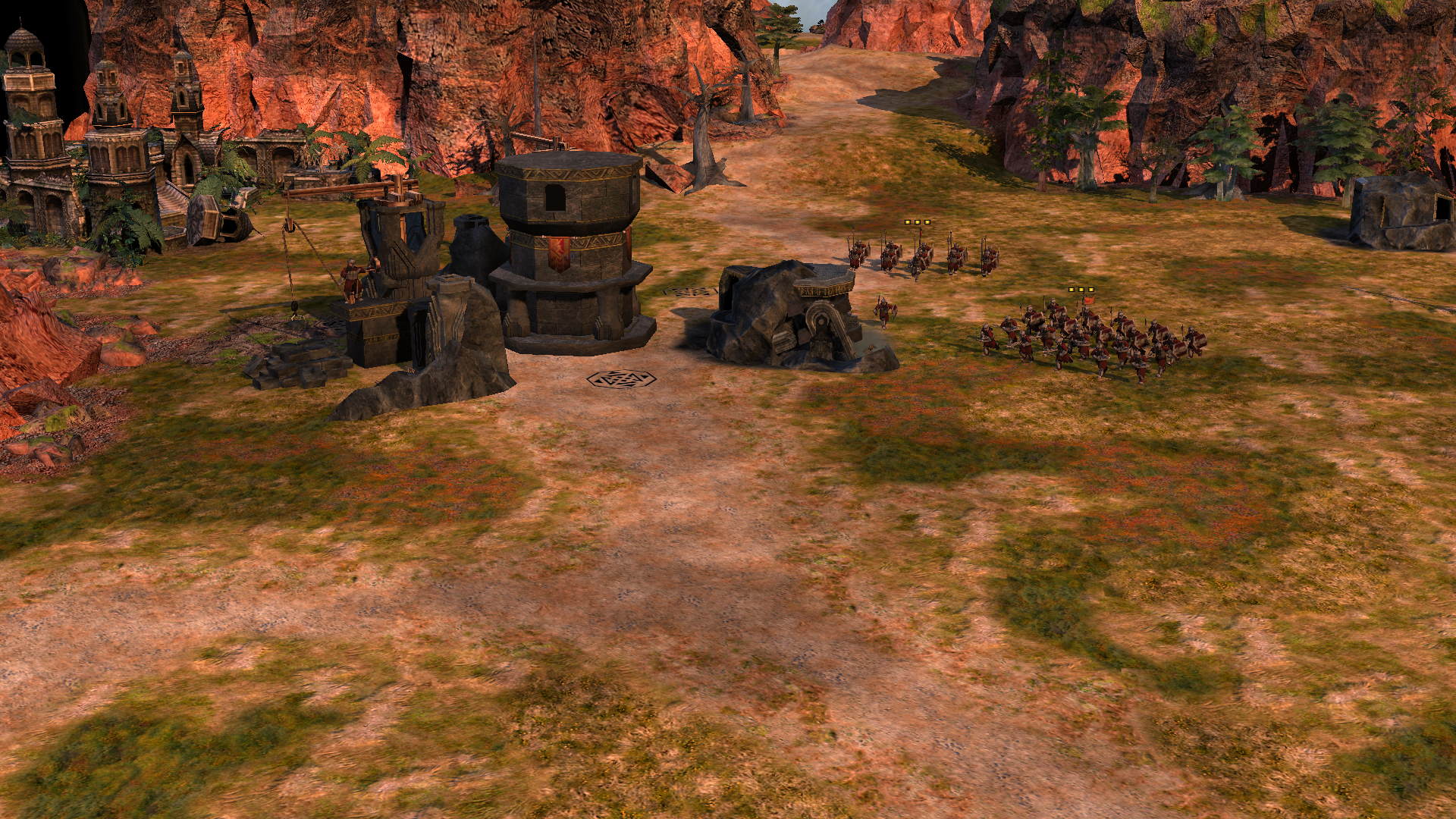 Perhaps Dwarves lived in the Orocarni

Unfortunately, Tolkien didn't give us more specifics - or did he?
If we look below the surface, Tolkien did give us a lot of information that inspired things like the red sandstone, a key feature of our map.
Tolkien was a philologist, an expert on language and its meaning. This is apparent in his works, especially when it comes to the names of certain regions. Want some examples?
In Europe, the color red is often used to describe rivers from a region that is rich in ore, which colors the water with a bit of red. An example for this would be the Red Main in Germany. In Middle-Earth, we can find the Carnen - Sindarin for Redwater.
Another obvious location are the White Mountains; it is quite likely that marble could be found and mined here and was used to build Minas Tirith, the white city.
There are many more examples of this to be found in Tolkien's work, but the point is this: Names are important. And the Orocarni, when translated into Westron, are the Red Mountains. This made it clear that the color is important, not just a minor detail, when creating our map.

At this point, we could have stopped at the connection of color of red and Iron, but that would have pretty much left us with a bigger copy of the Iron Hills further east. Copying an already known location is boring, and it doesn't give players the feeling that this is actually a unique place in Middle-Earth, with its own distinct characteristics. So we chose to focus on sandstone, which fits Rhûn.
And just like Tolkien was inspired by regions and landscapes from the real world (the valley of Imladris was heavily inspired by Lauterbrunnen in Switzerland, for example), we used an example from the real world for this map as well. To be more specific, the Elbe Sandstone Mountains. 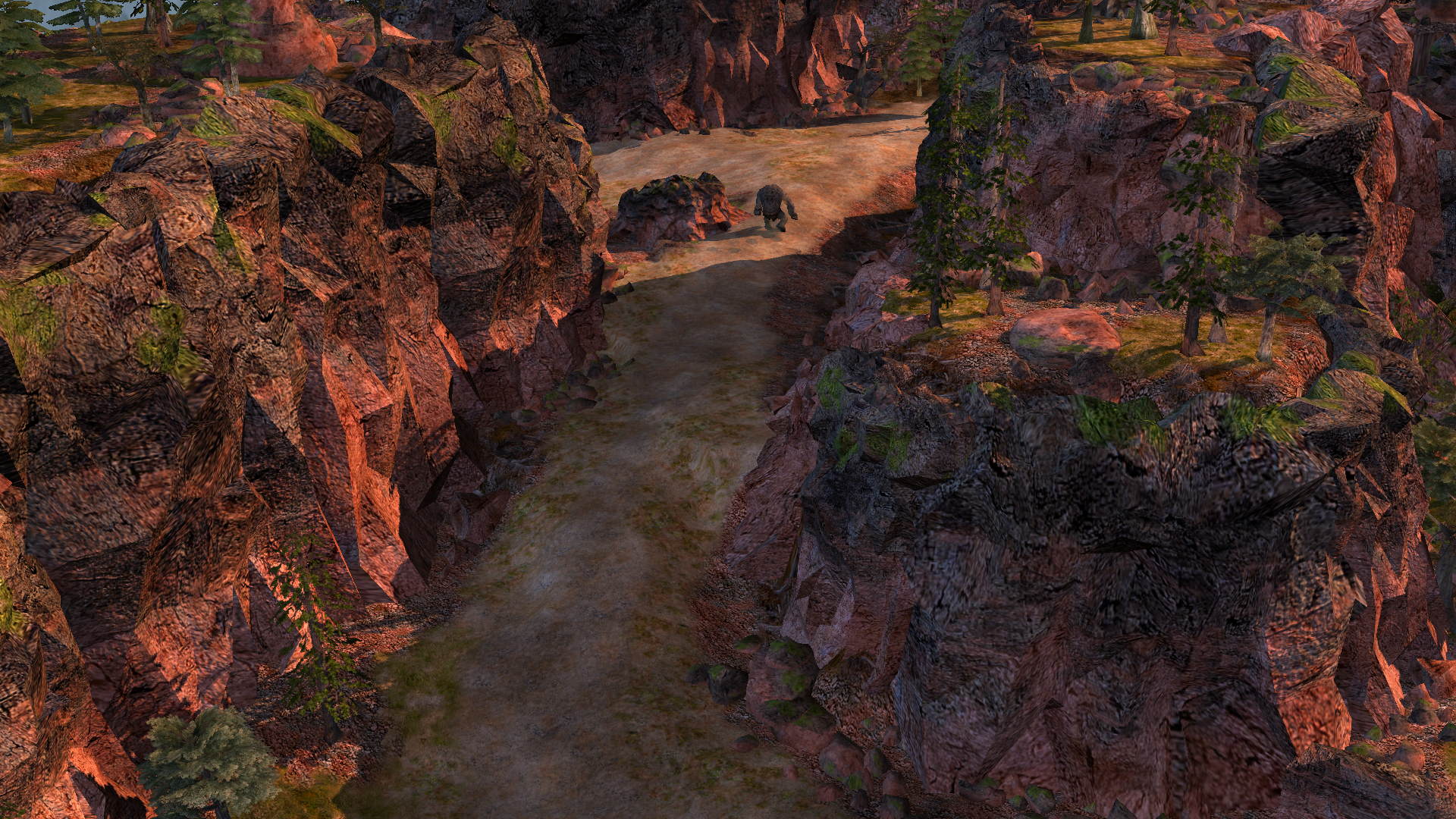 Another detail to be found on this map are the Elven ruins, hinting of the long history of the region. Maybe these are ancient reminders of the First Age, conserved by Elven magic through millenia? Maybe some Elves returned to be close to the birthplace of their ancestors? Many reasons are possible, but some questions can't be answered for certain. 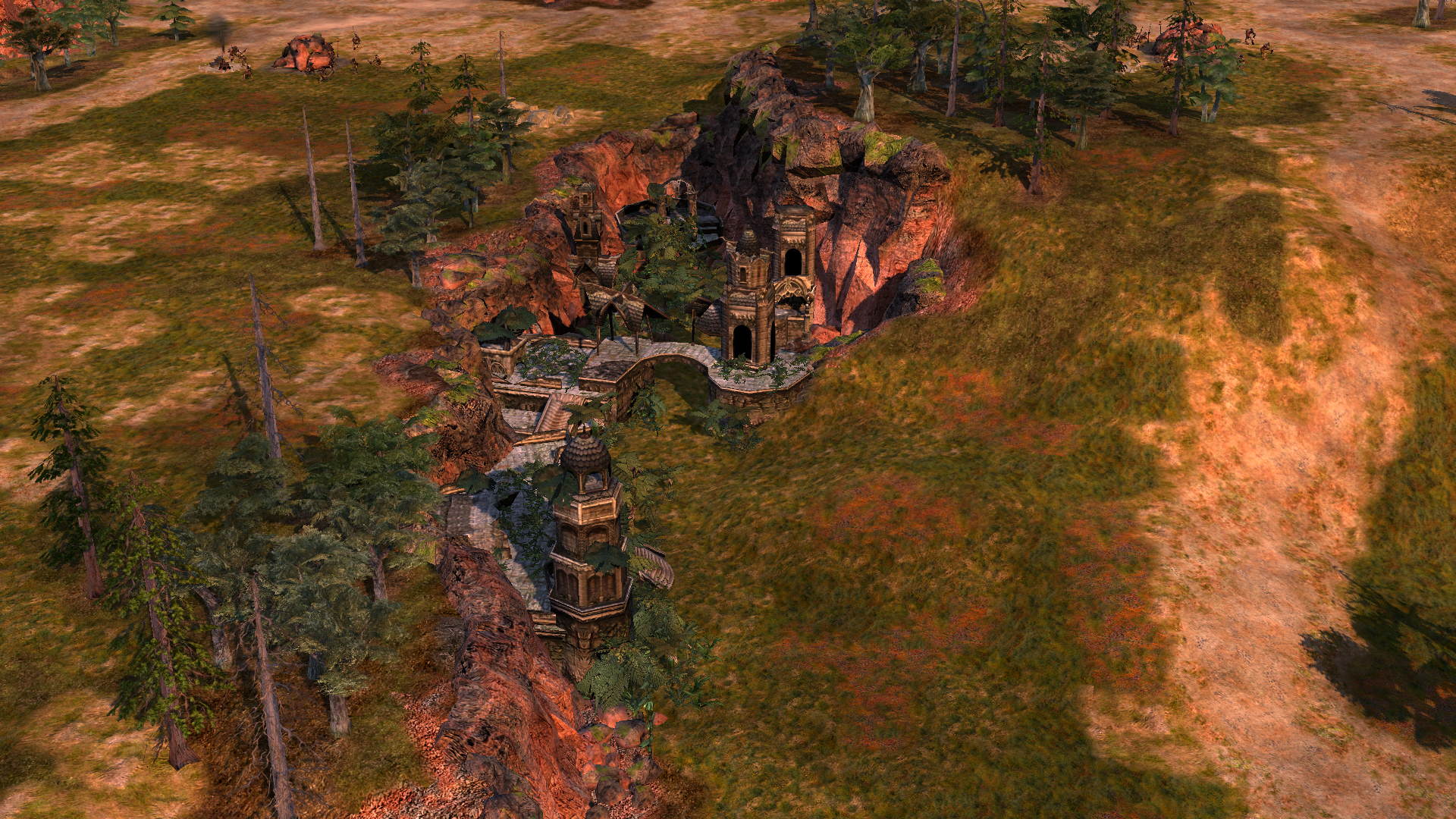 Where are these Elven ruins from?

Last, but not least, we also implemented the possibility of dwarven inhabitants - for this reason, we chose Dwarven soldiers for our trailer.

As you can see, we used Tolkien's work as orientation for our own, even beyond his direct storytelling. He wove so many details into his world that we can only marvel at it, and it's especially helpful for the most important basics that are immediately recognisable.
The smaller extras are then up to our own interpretation. Based on the rich history of Middle-Earth, they breathe life into each map. Some of these details may go unnoticed by most, but that doesn't mean we shouldn't stay as close to the lore as possible. Of course, there are many other things to take into account when making a map, but that would be far too much for this article.

We hope you liked this insight into our development process and our interpretation of Tolkien. Maybe you even learned a thing or two.
Stay safe and happy holidays!

Creating maps for BFME2 is difficult
now, creating maps that are balanced and loyal to the book, is a huge challenge
my biggest respect to the Edain Team. From the argentine BFME branch

Give orocarni dwarf faction. They had an interesting roster in divide and conquer third age mod for medieval 2 total war.

I find it really amazing how much the map looks and feels like the Elbe Sandstone Mountains.

Also this is the confirmation of the extended living world!!!!!

Great job. I always felt mapping was one of the original features that needed implementations. Your work on gameplay and factions is huge, and deserved a scenery. Leading Arnor or Iron Hills legions loses some of its interest on a flat square of grass. This map really gives the impression to take us somewhere new. Creating maps is a real job, and BFME engine doesn't allow a lot of liberties. Orocarni seems to be the most accomplished, including the original ones. Bravo !

That's why Edain will be on top. SO much depth and detail.

Excellent job guys, you keep surprising me every darn time. Tolkien (JRR and Christopher) would be proud of what you're doing ,both of them

Amazing job as always. One question, maybe this could be asked here:

Playing Mordor: When using the Haradrim support spell, why does the mumakil come without Haradrim bowmen on top in the basket? Who is controlling/steering the big beast? In the movie you see Haradrim warriors controlling the mumakil from on top. Would it not make sense to equip it with Haradrim in the game also? Even just for the atmosphere and lore? Or I guess its a balance issue? Spell too strong then?

Mordor's "Vassels from Rhun" summon doesn't work for me on this map. Soldiers do not appear on the map. Enough CP is a given. Just in case anyone else experiences this.