OMG, another update!? Nope, your not dreaming. It's time for another DI update YAAY!

Greece – near the town of Serrai 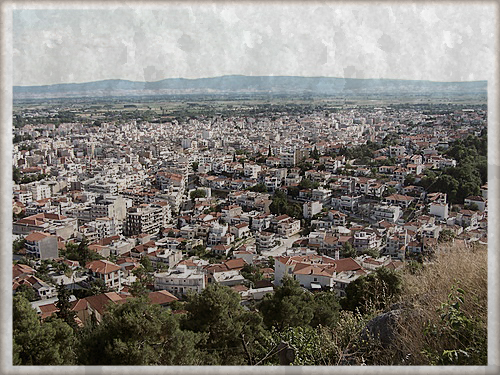 It was a very hot summer day in the north of Greece and Captain Chang’s forces were en route to the town of Serrai. The invasion of Greece was one of the most important parts of the ADF European conquest, and if captured, she would offer a huge boost in mobility as well as supply and logistics. His forces had been tasked with setting up an outpost to prepare for their real target, Thessaloniki.

"Sir, we are 10 kilometers from Serrai.", Chang’s first Lieutenant reported, "Our recon team reported no enemy presence near the town, but they haven’t entered the town to keep the element of surprise, as ordered.". Chang was a young officer with dreams of conquest and glory, so upon hearing this, he took it as a sign of weakness and cowardice. His convoy advanced at full speed, already feeling victorious.

The outskirts of the city was finally in sight. Chang’s forces prepared for deployment. All of a sudden a large explosion hit one of the troop transports, nearly taking it out, several explosion soon followed. "MORTARS!" "GET OUT OF THE TRANSPORTS!" Chang’s forces quickly exited their transports and spread out to evade the rest of the mortar shells, but not before losing a third of their numbers.

"What the fuck was that Lieutenant!?", Chang screamed, "You said the city was empty!" Chang grabs the Lieutenant by the collar and furiously points towards Serrai, "Does this look empty city to you!?", Chang throws him to the ground, "Gather the remaining tanks, we'll show those WEA cowards how real men fight!"

As Chang's tanks entered the city, they we're greeted by a bright flash. Sparks flew everywhere within the cockpit as their vehicles ground to a halt. "EMP!" Panic sets in as the sound of shrieking mortar shells grew louder within the now silent cabin of Chang's tanks. Moments later, a large explosion erupts as another mortar barrage hits the disabled tanks.

"What are our artillery doing?", Chang screamed, "They can't get line of sight due to the buildings and our scouts aren't surviving long enough to relay coordinates." Feelings of anger and inability washes over Chang as more reports come in of his army being decimated. Within the next 30 minutes, more than 3 quarters of Chang’s forces were obliterated. "Greek defense forces are approaching the town!", The remainder of Chang's forces find themselves trapped in urban carnage, trying to survive not only automated defenses, but now the Greek defense forces as well.

Realizing his dreams of conquest and greatness are shattered, Chang shifted his focus on escaping the city. "There!", Chang's driver exclaimed as he spots an exit, "We almost out of this hellish town!". "Try to avoid any more enemy fire" Chaneg shouted back "I want to be able to have my revenge!". As he he peers out of the viewports of his transport his eyes fill with anger as he thinks to himself, "I will be back someday with enough firepower to level this city", Chang begins to imagine his revenge, "I'll show them what happens when you oppose the might of the ADF-", a large explosion interrupts him violently shakes his transport, knocking him unconscious. About a minute later, Chang regains consciousness. His transport was upside down, and his driver was dead. As he scans his surroundings he notices a giant hole created by an armor piercing round ripping through his transport, he needed to get out of sight as soon as possible. Chang desperately tries to limp out of the city, but as he crosses an intersection he hears the low pitch hum of an automated turret turning towards him. "No..." was his last thought before two blue flares appeared and evaporated his body.

For now, the invasion of Greece has been countered. 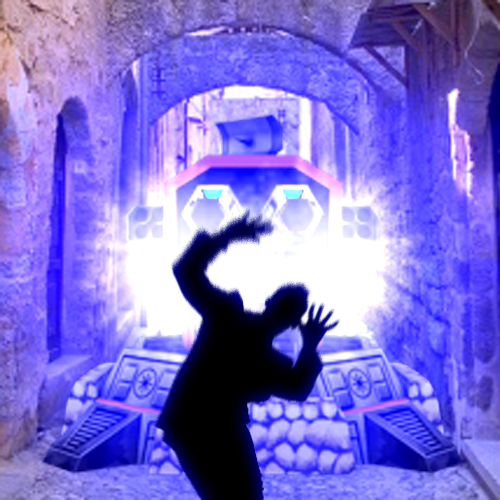 Nope, your not dreaming. It's time for another DI update YAAY!
Well enough talk, on with the renders! 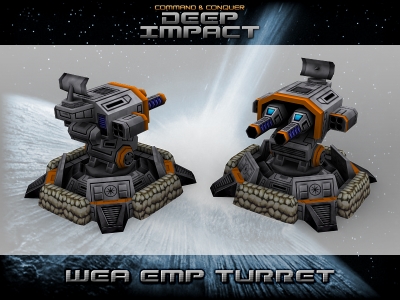 In the old days of the Zero Hour conflict, one of the best defenses the US Army had against the GLA were EMP weapons. It stopped both suicide and hit and run units in their tracks and allowed allied forces to deal with them from a safe distance. So it was no surprise that one of the first defense systems employed by the WEA Continental Defense were EMP weapons.

The WEA used old USA technology, refined by Cynopolis nano-technology, to create the next generation of EMP weapons. Unlike their predecessor, which used special missiles to contain the EMP until detonation, the WEA EMP turrets fire pure EM pulses held together by an invisible nano field. They are capable of disabling mechanical ground targets much faster, while the gamma radiation created by these "EMP Bolts" fries infantry on contact. Due to the unstable nature of these "EMP Bolts" reaction to the atmosphere, additional non-EMP surface to air missile launchers are equipped on either side of the turret for anti air combat.

This defense will only be available to the WEA Continental Defense division. They disable vehicles (but do almost no damage to them), kill infantry and have a decent AA attack. 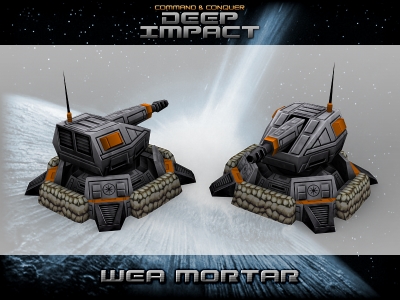 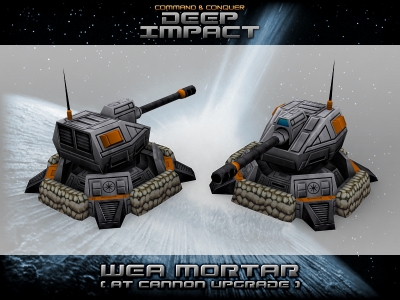 Nothing strikes more fear in the hearts of enemy forces than artillery fire. You cannot see where it comes from, you can only hear it’s descending sound and hope it doesn't land on your head. While EMP turrets were the frontline support defense, Continental Defense Officers required a cheap, easy to deploy damage dealing defense as well. The answered came with the Mortar Turret. It mortar has medium range and decent accuracy for an artillery weapon. If needed, the mortar gun can be replaced with a high caliber anti-tank gun, at the cost of range.

This defense will only be available to the WEA Continental Defense division. It has a mortar gun by default, but it can be replaced with an AT gun at the cost of range.

Well that's all we have for today, see ya next time!

i hate urban maps they are the perfect for an ambush

thats why i love them, you can make some nice screenshots with them or renders.

I wonder how big these defense structures are. About the size of a Bunker?

Atm, just a bit bigger than a EMP patriot.