As I promised, a new version of "Fall of Berlin" is finally released! 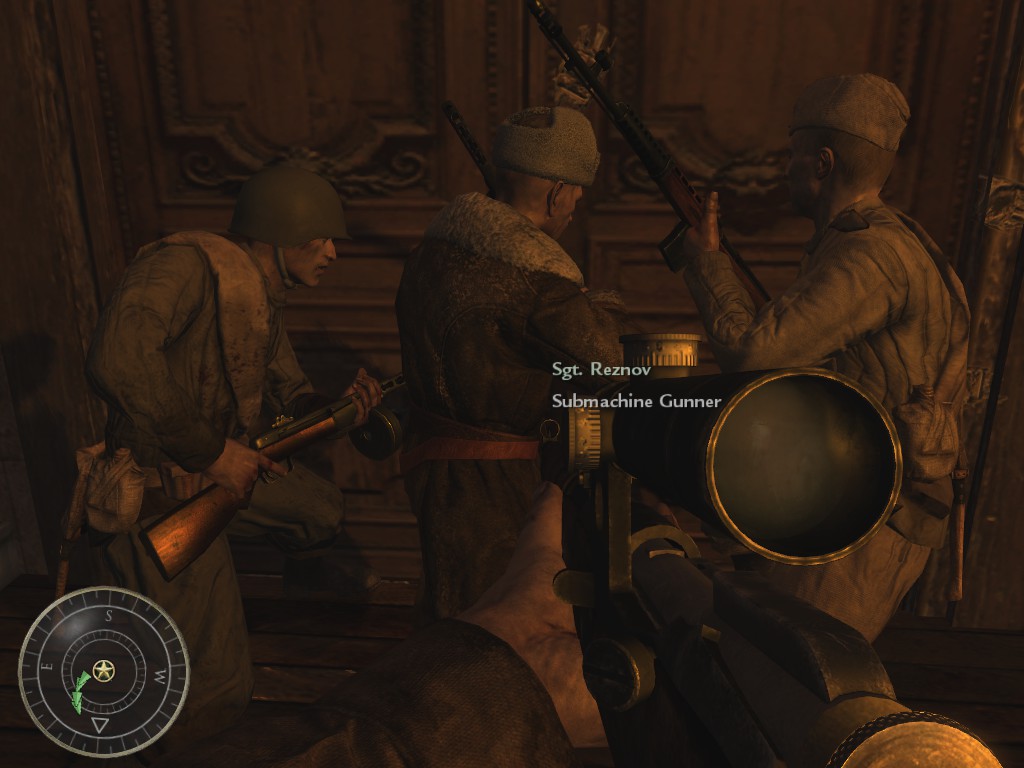 Details of the Fall of Berlin 3.4 version:
- A few arrangements for German models and weapons.
- As an 'experimental' work of mine, the aiming accuracy of teammate AIs will be (slightly) increased.
- A few uniform textures had been modified a bit.
- A new Soviet flag texture to replace the old one.
Because, by a new historical fact (that I just found a week ago XD): At the time it was planted on the top of Reichstag, the REAL "Victory Banner No.5" got only 'white (or faded white) Hammer + Sickle and Star' in it. The letters/inscription (that appeared in the previous FoB versions) were added later after it was taken down from the top. And that's why I'd like to change it, and w/letters version will be included in an 'extra iwd files' folder.
Interesting source: Escholarship.org
- New and corrected surnames for teammate AIs will be included as well.
- An updated version of Pacific Theater 1.6 (slightly increase teammate's accuracy).
Also included with special texture mods for the Semper Fi mission will be included inside the "For Semper Fi" folder.
- ***Kriegsmarine Naval infantry texture mod will be located inside the "For Heart of the Reich and Downfall" folder.*** And that's mean it will be (much) EASIER for you to change the texture for your playthrough, compare with 3.3 version that you have to install the texture manually...
HIGHLY RECOMMEND TO USE IT WHILE PLAYING HEART OF THE REICH AND DOWNFALL MISSIONS.
Due to the historical fact that some Naval infantry troops (likely to be a part of Grossadmiral Dönitz Battalion) were among the defender forces during the Battle at Reichstag and its surrounding areas.
- Additional 'Extra Textures' and 'Extra iwd files' (minor mods), please read our instruction carefully if you want to use them.'

Here is a detail of what's inside the 'Extra iwd files' folder:
1. Portraits folder - 2 texture mods for a portrait that appeared in Heart of Reich and Downfall missions.
2. Soviet Flags folder - 2 (alternated) texture mods for a Soviet flag in Downfall mission.
3. zzz_CREDITSV4 - Bonus at the 'credits' section (version 4).
4. zzz_Flag - New texture for one of the Nazi flag, originally made by War_Crimes.
5. zzz_Flak_88 - New texture for German's Flak 88, originally made by War_Crimes (recommend to use it in 'Blood and Iron' mission).
6. zzz_INTRO - Remove date settings from some of the missions, just to create some more logic and realism to the storyline.
7. zzz_LOADOUT - A custom starting weapon loadout of mine, just a little change in a few missions.
8. zzz_LOADOUT2 - Same as above, but also add 'Mosin Nagant w/scope' for some of the Soviet missions as a secondary weapon.
9. zzz_MJ'sPzschreck - New texture for German's Panzerschreck, originally made by Masterjames.
10. zzz_NAMEedit V2 - Additional surnames for AIs like the one that already included in the main mod file, but also change the "Pvt., Cpl., and Sgt." into "Enlisted and NCO."
11. zzz_pzgd_OAKautumn - Waffen SS smock with Oakleaf autumn pattern + autumn camouflaged helmet.
12. zzz_pzgd_OAKspring - Waffen SS smock with Oakleaf spring pattern + spring camouflaged helmet. 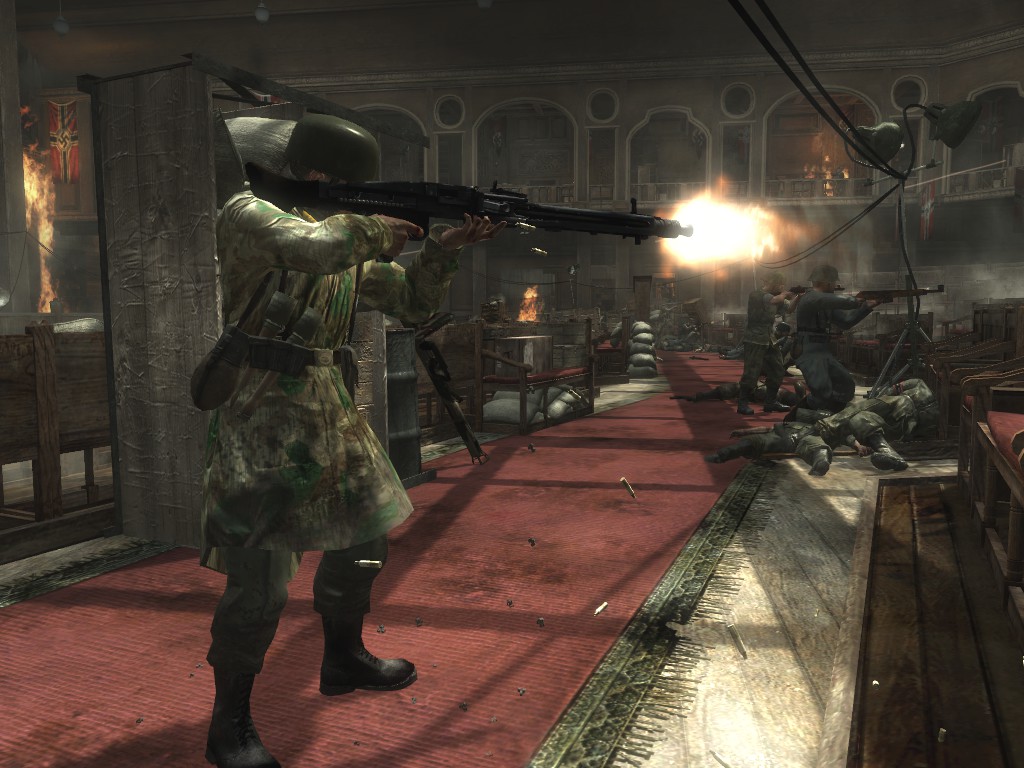 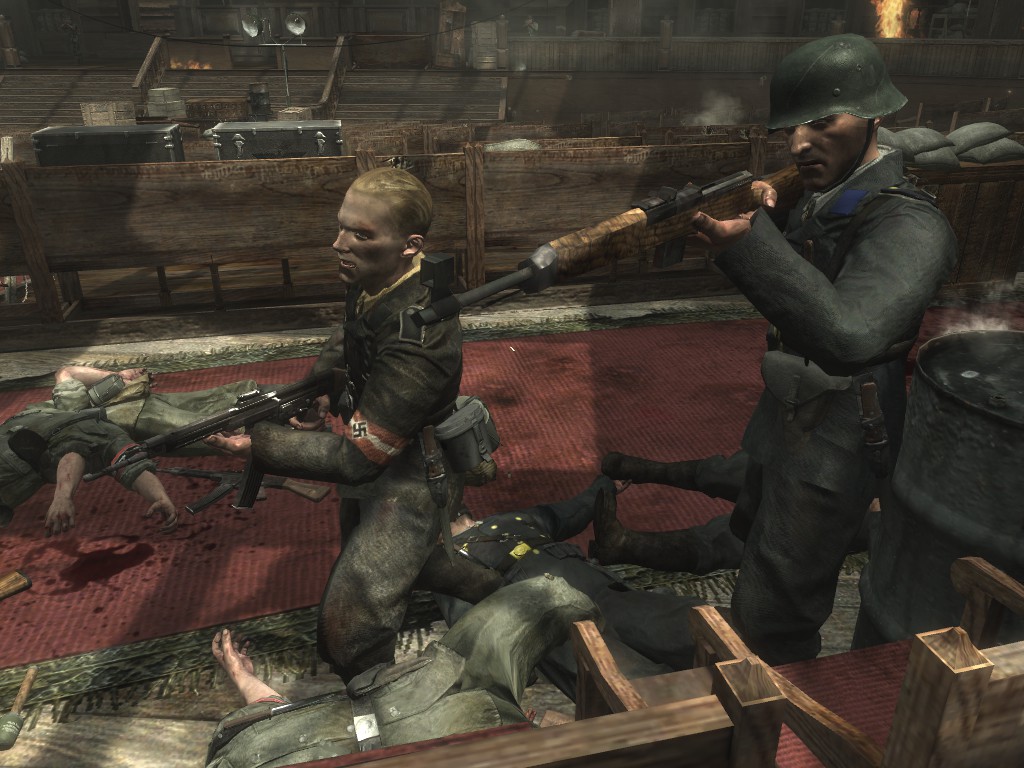 In order to play for the best immersive/authentic experience: 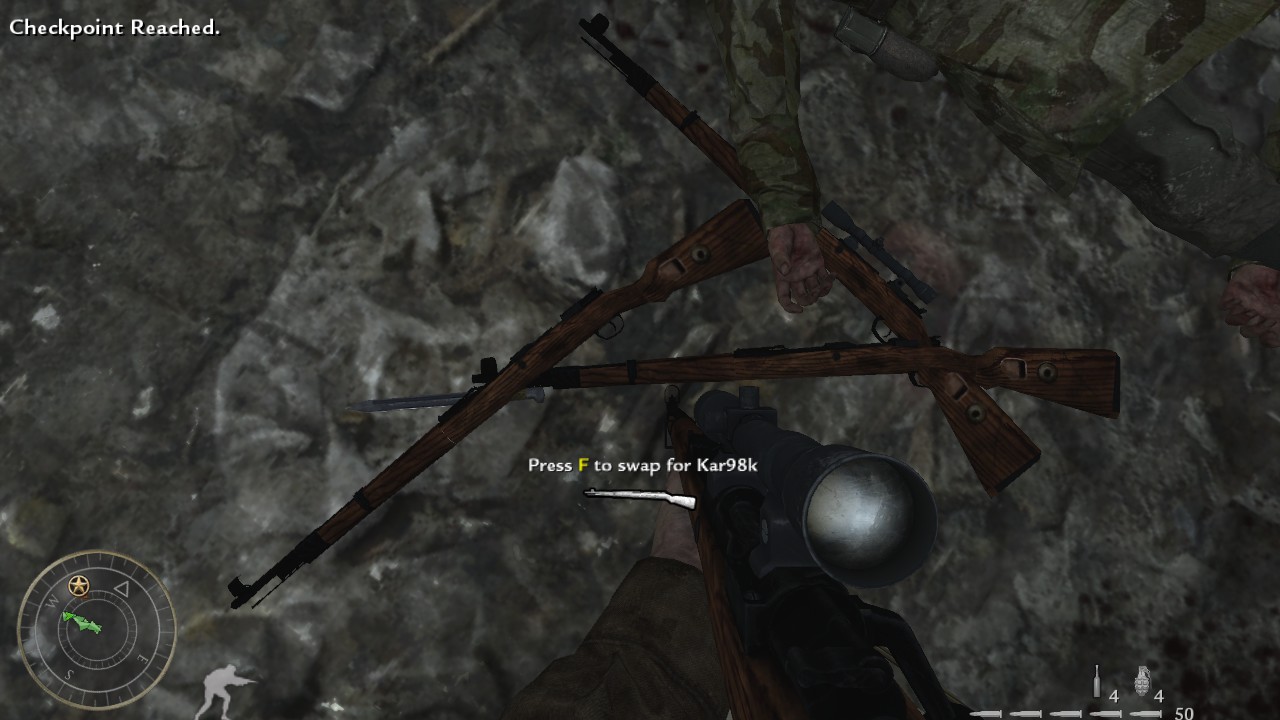 EXTRA info for those who want to know what kind of OLD + NEW German units were represented in the Fall of Berlin (FoB) mod:
1. Heer (Army) troops: appear with both regular tunic and Panzergrenadier models (those with anorak/smock). Based on:
- 309th Infantry Division (Seelow)
- Panzerdivision Muncheberg (Seelow and Berlin)
- 18th Panzergrenadier Division (Seelow and Berlin)
- 20th Pzgd Div (Seelow and Berlin)
- 25th Pzgd Div (Seelow, but elements of them might retreat into Berlin also)
- Some other Heer and newbies units
2. Waffen SS (mainly) and other SS related units: appear with a regular tunic, Waffen (camouflaged tunic without shoulder straps), officer (AMSEL) model, and Panzergrenadier model. Based on:
- A FOREIGN VOLUNTEERED 11th SS 'Nordland' Pzgd Div, mostly Scandinavian (Seelow and Berlin)
- 1st SS Anhalt Regiment (Berlin)
- A small part of Panzerdivision Muncheberg ('SS. Panzergrenadier-Ersatz-und- Ausbildungs-Bataillon 1' from the 1st SS Leibstandarte Panzer Division)
- Around 600+ men from the 1st SS Leibstandarte Division (Berlin)
- Other foreign volunteer units like a company of Latvian SS from 15th SS Waffen Grenadier Division and French SS from the SS Sturm-Battalion Charlemagne (Berlin)
- Those who were filled into Kampfgruppe Monke and Babick
- SEVERAL other SS units in Berlin
3. Volksstrum (armed civilians and newbies, aka "The Old, The Young, The Weak"): regular tunic with Volksstrum armband, based on so many Volksstrum units in Seelow and Berlin.
4. Fallschirmjager (paratroopers): appear with FJ with jump smock models, based on paratroopers of the 9th Fallschirmjager Division (Seelow and Berlin).
5. Luftwaffe infantry (default 3.4 version): replace 'char_ger_honorguard_body1_c' model, based on those who were attached/filled into the Axis defender forces in both Seelow and Berlin battles. Notably the 9th Fallschirmjager Division, a majority of them were inexperienced Luftwaffe ground forces and trainees.
6. Kriegsmarine naval infantry ('For Heart of the Reich and Downfall' folder): replace 'char_ger_honorguard_body1_c' model, based on the 'Grossadmiral Dönitz Battalion' (sent by Grand Admiral himself, and reach Berlin on April 25/26th).
7. Hitler Jugend - replace 'char_ger_honorguard_body2_c' model, based on several Hitler Jugend units in Seelow (last defensive line) and Berlin. 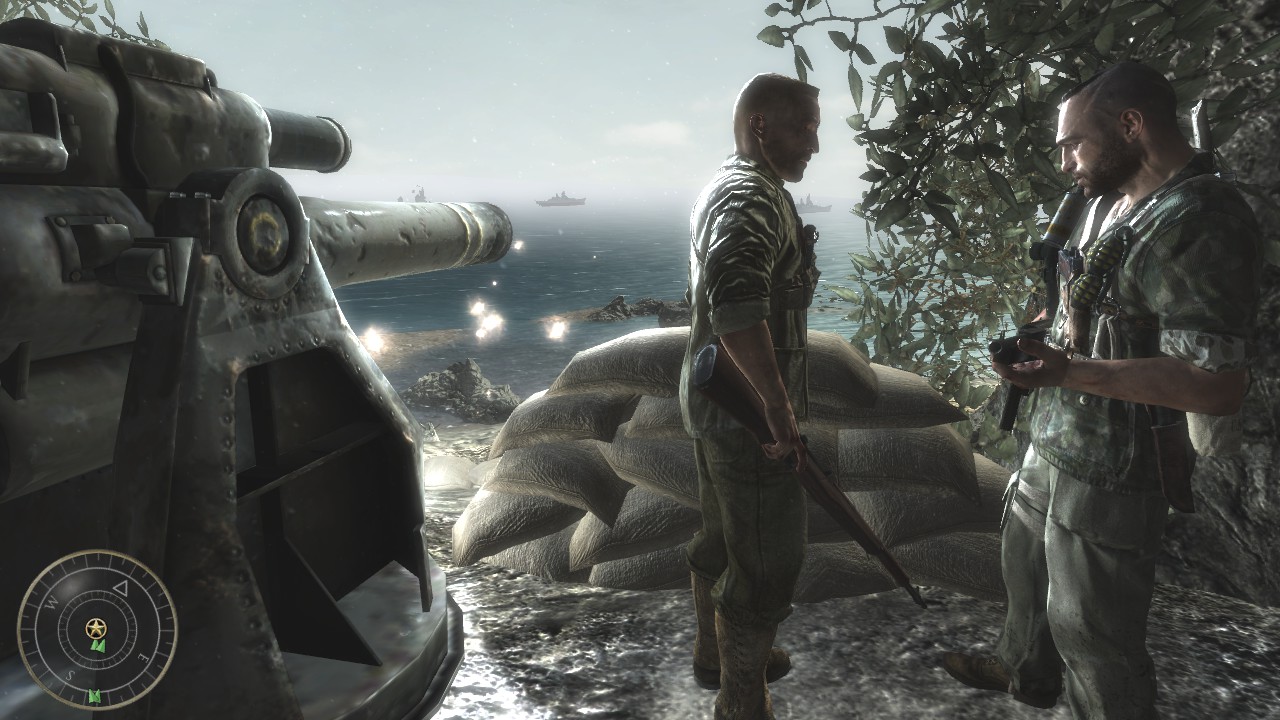 ***In addition, our team recently got a new member! His name is "gicombat" and he has several skills that could be able to improve our mods to be even much better!

Well, in other words, there will be something REALLY BIG comin' up... Please stay tuned until then!

2) Walkthrough video of this mod (version 3.4) by 'Luna', but I think he forgets to use the "Naval infantry texture" for Heart of the Reich and Downfall though:

Can you remind me again, is this just a difficulty change or is this a brand new singleplayer campaign with new scripting/mapping/etc?

As an attempt to increase historical accuracy for the actual immersive/authentic gameplay experiences for the campaign mode.

Were there so many Luftwaffe field divisions in Berlin ? sometimes it seems that there are too many of them.

Well, as for the Ring of Steel mission, it's an attempt to represent the Luftwaffe infantrymen that were filled into 9th Fallschirmjager Division (defended the northern areas of Berlin at the beginning of battle). While for Heart of the Reich and Downfall, you should replace them with Kriegsmarine/Naval infantry texture as I mentioned in the article and instructions.

What about other missions? For example, "Their land, their blood" or "Eviction" And for the mission Ring of Steel there is a separate mod

In Their land, their blood, they also represent the Luftwaffe infantrymen that were filled into the 9th FJ Division and possibly some other units during the Battle of Seelow Heights. And for the Ring of Steel mod, it's literally the same as my previous comment above.