Post news RSS Update #4: You can take THAT to the Bank!

Welcome to the FOURTH Update on our explosive, epic, and downright strange game, OINK!Here we talk about the new additions, revisions, and all things O'ink!

Posted by AustinTheMagnificent on Aug 25th, 2017

Ahoy you internet beasties! AustinTheMagnificent here with the fourth update on our explosive, epic, and downright strange game, OINK! Now enough with all the introductions, you don't care about those. You care about the content our motley crews been making!

To start, we've added a lot of depth into the item system. The player can now select items from their inventory, equip it, throw it, drop it, use it ( if it is a consumable ), and put it back into their inventory where they can safely horde any item they so please! Icon UI is still being worked on as we speak, but the foundations needed have already been laid, and they are more sexier than ever!

The bank? Doesn't sound too interesting does it? When you think of a bank, you don't usually picture something pretty. Long wait lines and cranky old women certainly isn't pretty. But in O'ink, you wont have to worry about either! The bank in Max's hometown of Porkland is a truffle hoarders dream. We've completed concept for the banks model, as well as the banking system. In the game, your currency to begin with will be Truffles. With these truffles you can purchase unimaginable things....... In the game, you can spend your hard earned truffles on various items to increase health, stamina, and character buffs used to help aid you in your journey. You can ALSO purchase a pirate hat if you so please. The currency system has been in the works for a fairly recent amount of time, but it has definitely been one of the easier systems to implement. Because seeing C# bores the masses, we'll give you a bit of a preview of the Bank model, which is still a work in progress! 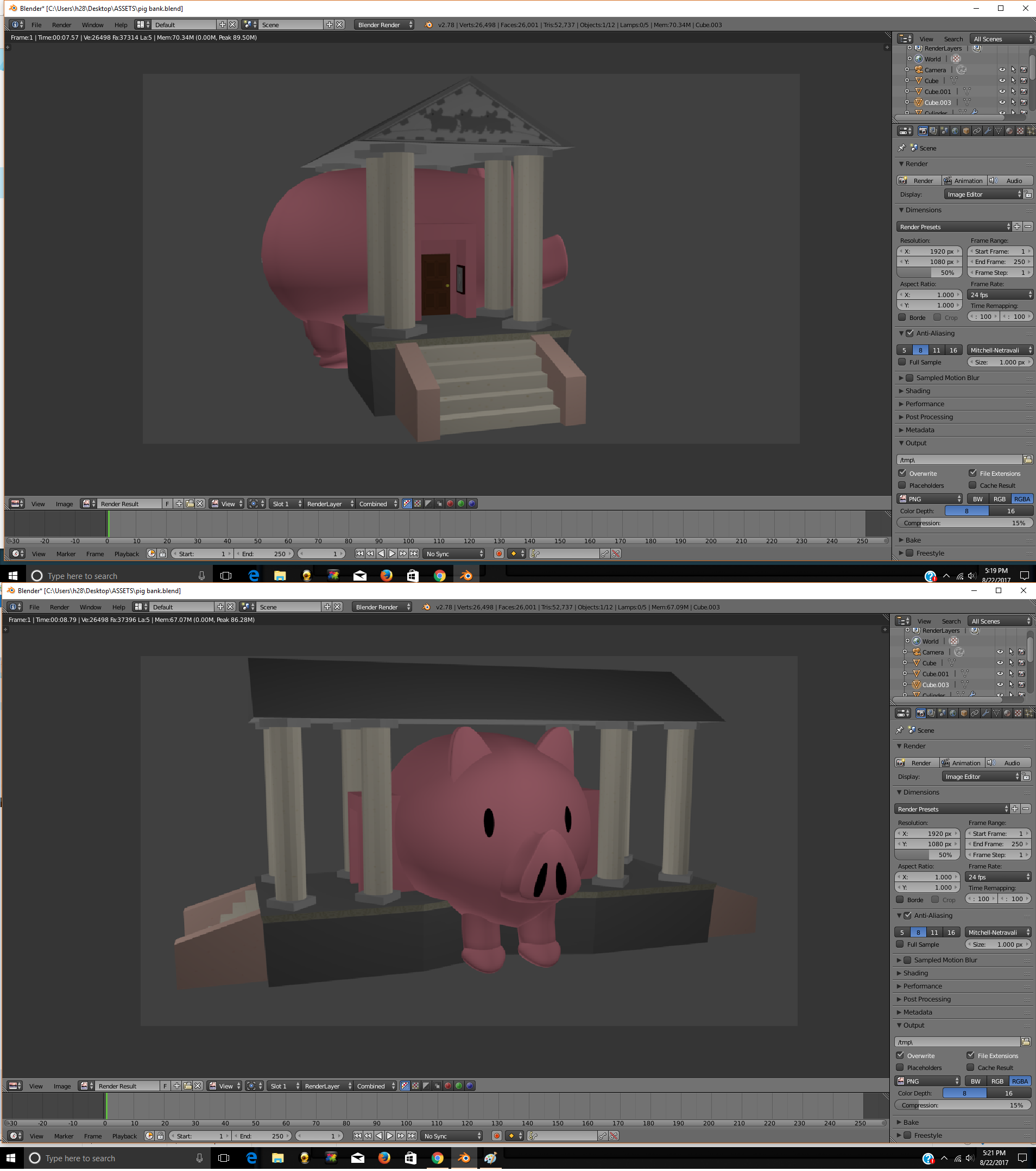 Perhaps the biggest, and most fun system we've had the pleasure to work on is the Ragdoll system. Seeing items, enemies, and even hot dogs fly off into the distance after being hit is pleasing to the eyes. Ragdoll Physics are to us what explosions are to Michael Bay- essential. We've been using our stock enemies for this early system. We've set up various systems of how the Ragdoll physics will be implemented depending on the NPC or the items' weight, and diameter. Rest assured though.........Regardless of size, there will ALWAYS be a way to blow your enemy sky high. Be it hitting them, or serenading them! ( That was a joke, we don't have an animator for that kind of work )

We've also been working on the enemy controller. This is the focal point for the enemy AI, how they think and operate. How they move throughout the map, and how they function. The enemy path finding system is also being worked on. Certain NPC's will be zoned to walk organically in different zones depending on the weather, and time of day. The AI can now also sense your presence if you sprint from a longer distance, just as they would if you were to calmly stroll up to them within a shorter distance. The Enemy Nav Wander has proven to be effective thus far. Currently they only approach the player, and negatively deduct their health statistics. But enemy combat animations, and their weapons system and item loot drops are still being worked on as we speak. The enemy spawning system has also been worked to allow for enemies to not spawn in the same exact spot they did the moment previous, but instead spawn at different points in their designated zone each time they have been eliminated.

A current system that has the AI having more of a presence where there has been large amounts of conflict and less so in the areas where there is little to no conflict is being planned.

That's all for now, Joe

As of now, that's all we've got to show for the moment! While it may not be as sexy as one would hope, the game is progressing rapidly on the programming level. We are working hard on systems that will only continue to grow and improve as we make adjustments, begin revisions, and remove certain components. Toon in for the next update to see more screenshots, videos, and lengthy nonsensical text explaining what they mean!

We're looking for dedicated game developers to join our crew that are willing to work hard, and have fun while doing so! If you're weird, love indie game development, and want to be apart of something fun, please do send @AustinTheMagnificent a message about how you can assist the crew, what you have to offer, and why you want to join!

We're looking for concept artists, 3D modelers,animators, and programmers knowledgeable on C# and with experience in Unity 5.