The melee system now reads several attacks from the combo tree. We also show the combo tree we planned for grimmjow and how we will implement melee effects. Finally we go over some of the results we got from network testing and the support for linux.

Back in February we were able to show Grimmjow doing a single attack, with no delay between the attacks and the animation wasn't even part of what you will see in the combo tree. ( see: (Very) Early melee implementation )
Since then we both worked with the melee implementation and support for Linux servers. We made good progress on both parts, but we are not done with them yet.

For starters, there have been quite some changes since the last news we posted here. Including a very basic concept of the melee implementation. In the last news update we talked about how we wanted to prevent the melee system from becoming too dull, by using some small reiatsu related attacks that either was ranged or had areal effects.
These effects can take quite some time to implement, as both the behaviour needs to be written and the graphics also takes some time to make.

Charged attacks, clashing and stamina are also postponed for now, but these requires less work, so we will surely keep them in mind as we progress.

Since February we have been able to create the combo nodes, which will contain the information necessary to perform the attack, and use them in the melee system. The results can be seen in this video:

As seen in the video, the synchronization between animation and attack isn't implemented. This will be resolved when each attack has a delay value assigned to it. The video was recorded back in march, but visually the melee system resembles that.

Meanwhile we have been testing whether the client prediction was necessary or not. The result was that it improved the smoothness of the animation when the latency is high. Some of our former developers didn't include that in their weapon development, and as such we are currently updating them to include that.

Last week we held a meeting, where we planned the combo tree for Grimmjow. (Ichigo's will come next) 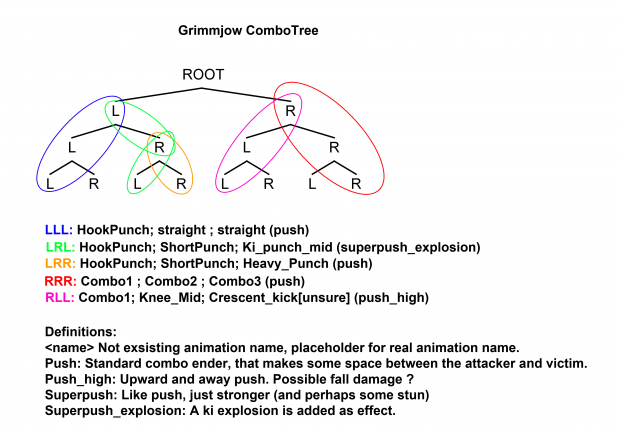 The RRR combo is shown in the video. There will be updates to some of the current animations as well as new ones. Getting this done has made it possible to continue working on the attacks codewise while Angel makes the animations.

Codewise the combo tree now supports a value to define attack delay as well as an effect identifier. The effects themselves has yet to be coded, but since they resemble each others it won't take too long to make.

Another thing we are working on now is to be able to traverse the combo nodes in a tree. It seems redundant to write a system which builds a tree, compared to simply writing the tree manually. This is due to the tree being relatively small and the attacks are all static. You can read more about it here: En.wikipedia.org

So to sum up, our next milestone for the melee system is to synchronize attacks with their animations, traverse the combo tree based on button clicks and add more animations. The effects will come at a later stage.

If it is easy to support, then one should support it.
It isn't the first time we considered making Linux support, but it is the first time we are actually trying.
With aid from this article at the wavelenght: Articles.thewavelength.net , Debian 3.0R6 and a windows batch script running dos2unix. We have been able to convert it all to ANSI c++ and compile a .so file.

That took a bit of time...mostly due to the requirement of gcc 2.91.4, which does not work on newer Linux kernels.
Unfortunately Steam_CMD have been giving us a headache and therefore we haven't been able to test it yet.

The good part however, is if we get it running, then we will maintain Linux support for the mod. We know a lot of web servers running the old Goldsrc engine, runs on Linux. And we know it is important to support that, as Linux servers are so much cheaper than windows servers.
So we will do our best to resolve the issue and get it working.

That is it for now. Joshua might turn up with some images from his maps at some point.

How do you like our videos? We don't have any one on our team who is a magician with video editing, but we try to keep them relative small and content related. Feel free to give us feedback.

In the past 3 months we have progressively written small updates in the comment section. What do you think of that?

And don't forget to follow us on Facebook. We have updated the profile and made it easier to maintain the page as well.

Thanks for watching and following.
See you next time :)

things seem to be working nicely

OMG IT'S BEEN 2 YEARS SINCE I SAW IT LAST TIME...
Sorry for caps... i though you guys killed this project...

Indeed, I like it more and more. Nice progress.

Since our team became smaller, the teamwork has increased and a lot less time is wasted on waiting for nothing. While it isn't what I hoped for when I took over on this project, it is still a good feeling to try to accomplish on a smaller scale with the project. That way, only a part of our dreams won't make it.

Killing the project would be the very last option, and for the remaining developers it would be a very big personal loss.

I'm happy that you like our progress. I hope I get around to syncing the attacks with the animations soon, so we can make a new video.