Booze, disruptions, and lawbreaking. It's a pirate's life in our latest devlog!

Happy continued summer Starchasers! Heat stroke is no laughing matter, so make sure you stay cool this morning. It’s very cold in the loveless vacuum of space I hear, so that may be an option.
Fun fact, while working on all this a tornado tried to destroy everything.

It seems rather appropriate, or perhaps eerily prophetic, that a game about space storms would have a storm come to prevent its inevitable release and success. Or maybe it’s just nature and stuff, who knows. Either way, god hasn’t been able to kill me in the thousands of years I’ve been alive, he’s not gonna succeed now! Onto progress!

As always this is just a paraphrasing of the main article, which you can read here. You can also check out our demo and join our Discord for more moment to moment updates!

A Pirate’s Life For Me

Piracy was the major focus of this month’s progress. But, it’s hard to roleplay a highwayman if there are no NPCs spawning on highways. We fixed that, and improved piracy so that you can disrupt and threaten NPCs for loot and money.

Making piracy work meant going back over dialogue mechanics. NPC ships can get really mad if you decide to screw around with them, and NPCs will give full directions if you’re friendly with them. NPCs also construct backstories as to why they’re doing the job they’re doing. 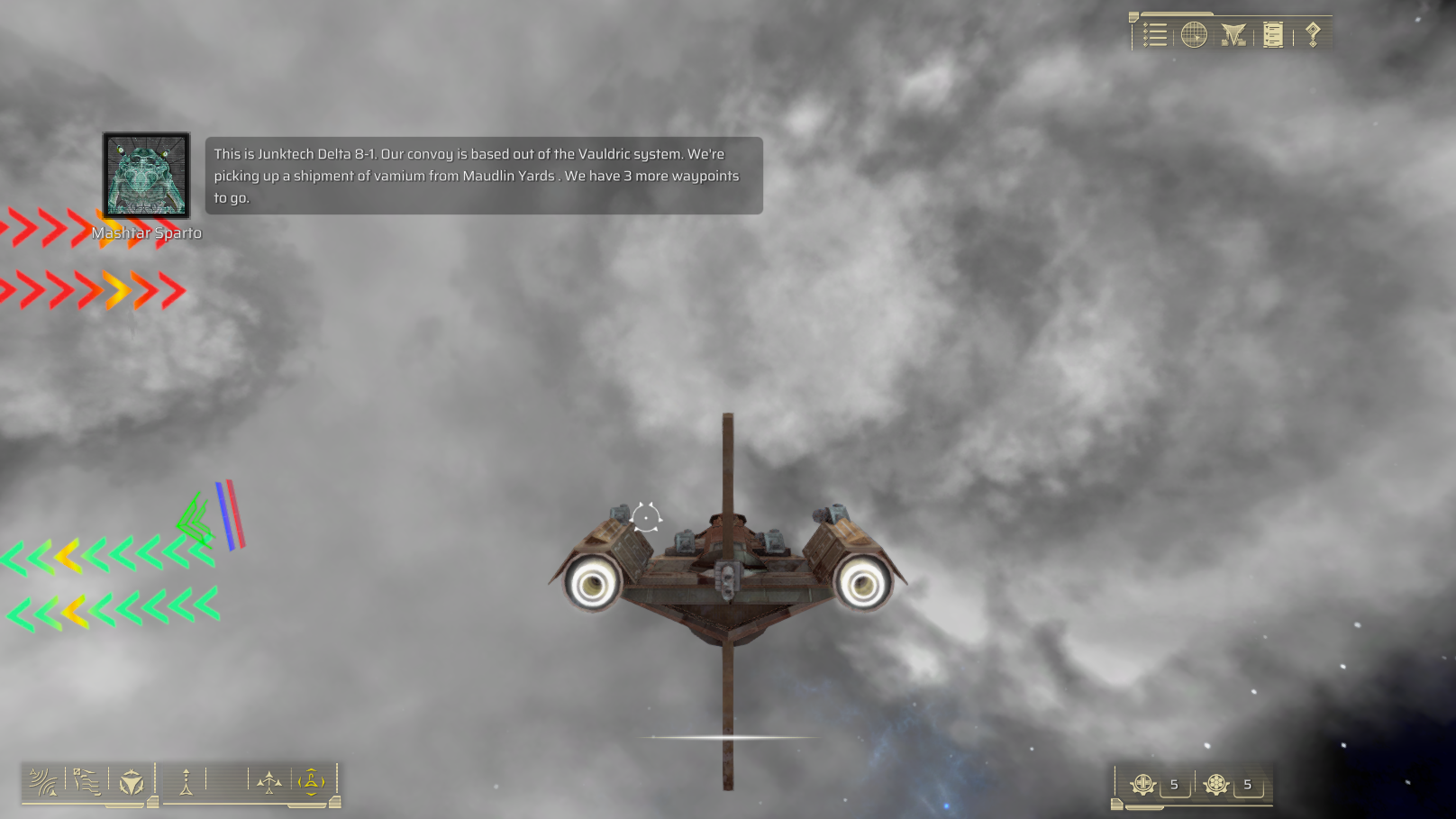 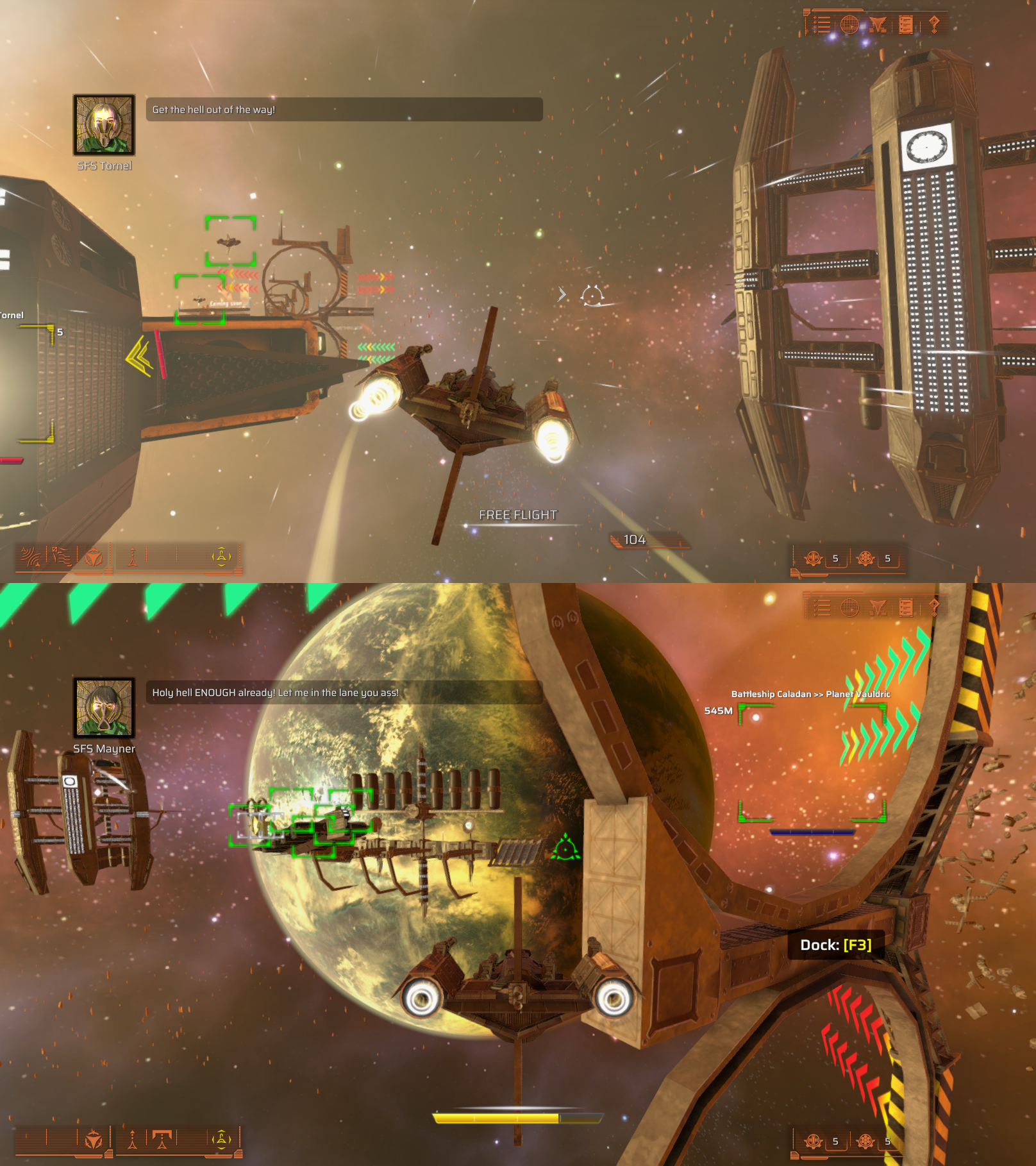 But piracy carries consequences. Commit enough bad… law… things, and the military might send a battleship after you if one is available. 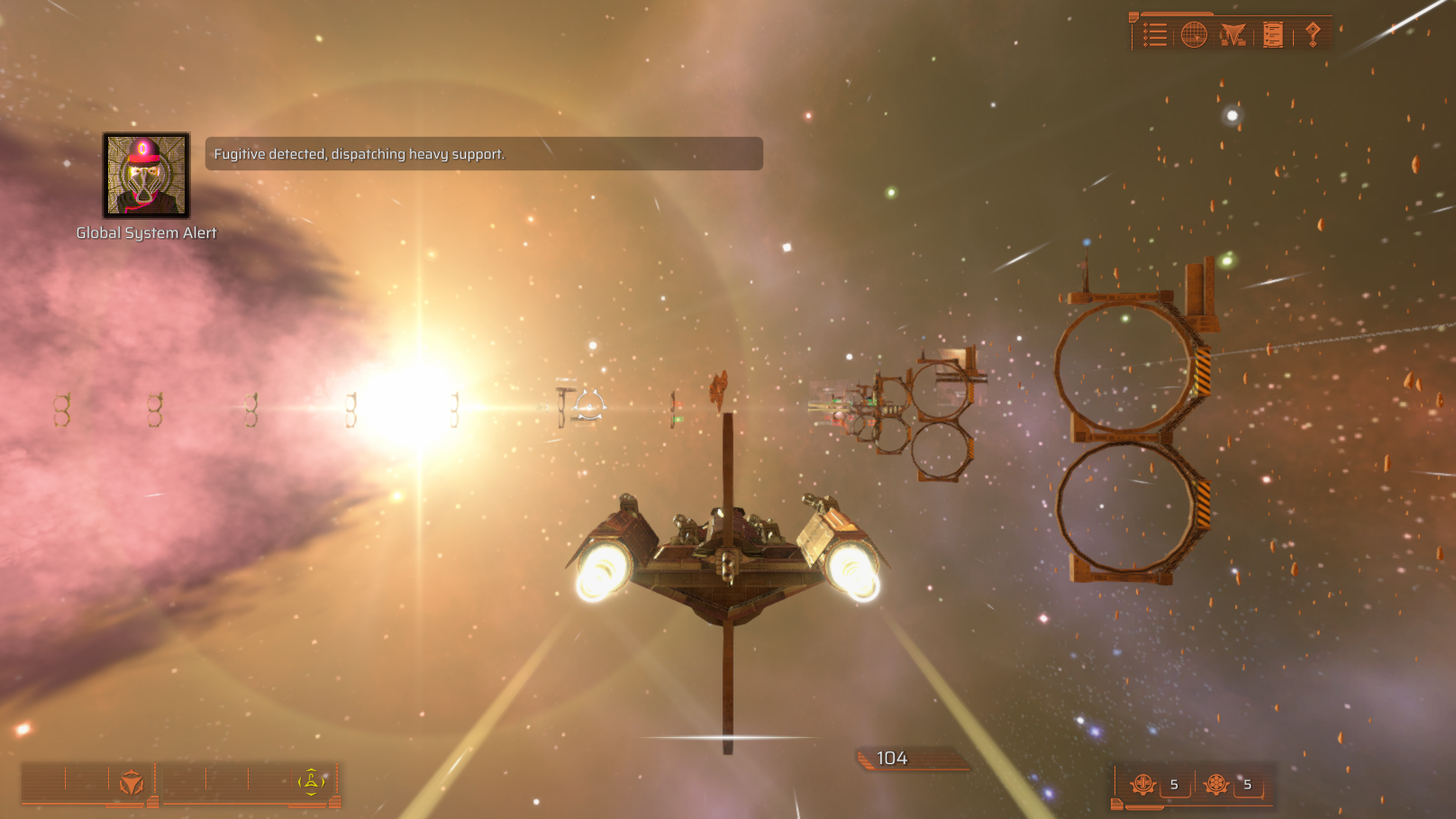 And of course, what’s a good pirate without proper destruction states and animations on larger starships? 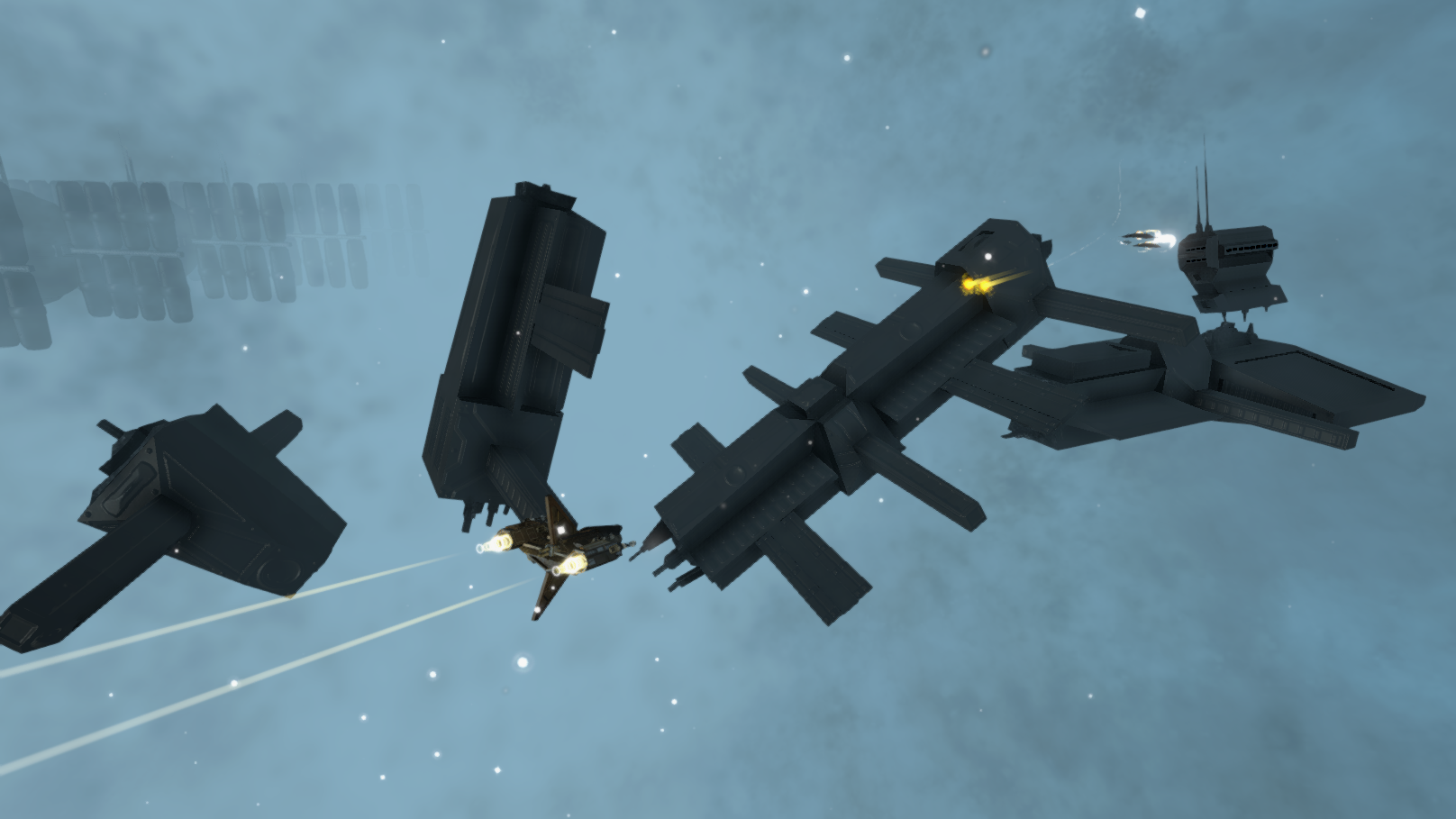 We also spent the month reworking a few implemented, but lacking, bosses. The Hellmouth Prince for example, got his attacks reworked.

Meanwhile, the Haywire Hulk had fully implemented animations, attacks, and summons. He’s a lot of fun, probably my favorite boss so far.

A few boss weapons were neglected in the past, but have been fully implemented now. From beacons that call in bosses to do fly-by attacks, to a void that grapples and tethers nearby enemies.

A few other bosses got minor scripting implementation, but we’re not QUITE ready to reveal them just yet.

A lot of the game’s various sidequests are written up now, but implementation lags behind a bit. The major one implemented this month was a small early game questline where you’re able to get drinks with your lawyer (and only friend), Karbelle. 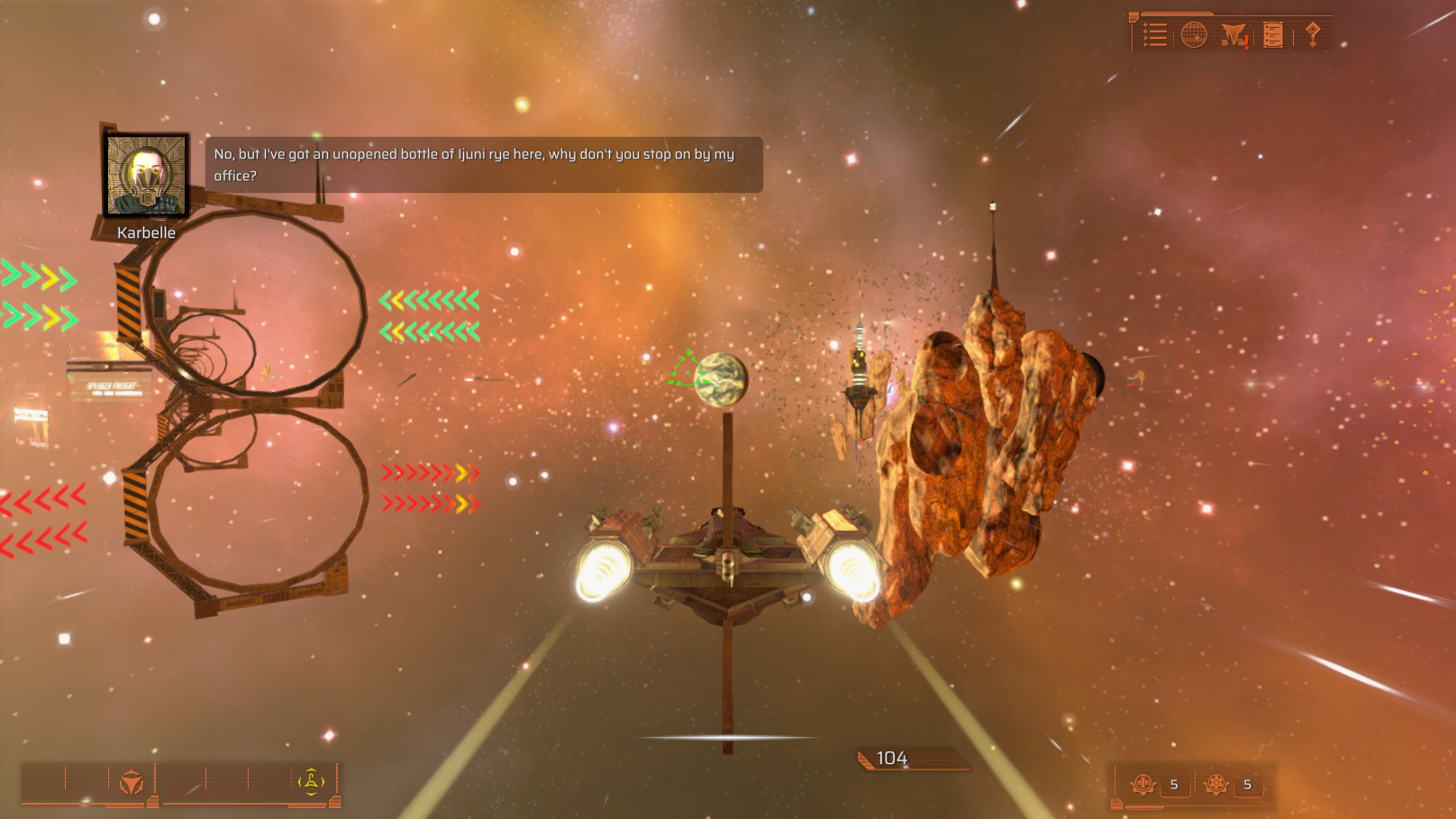 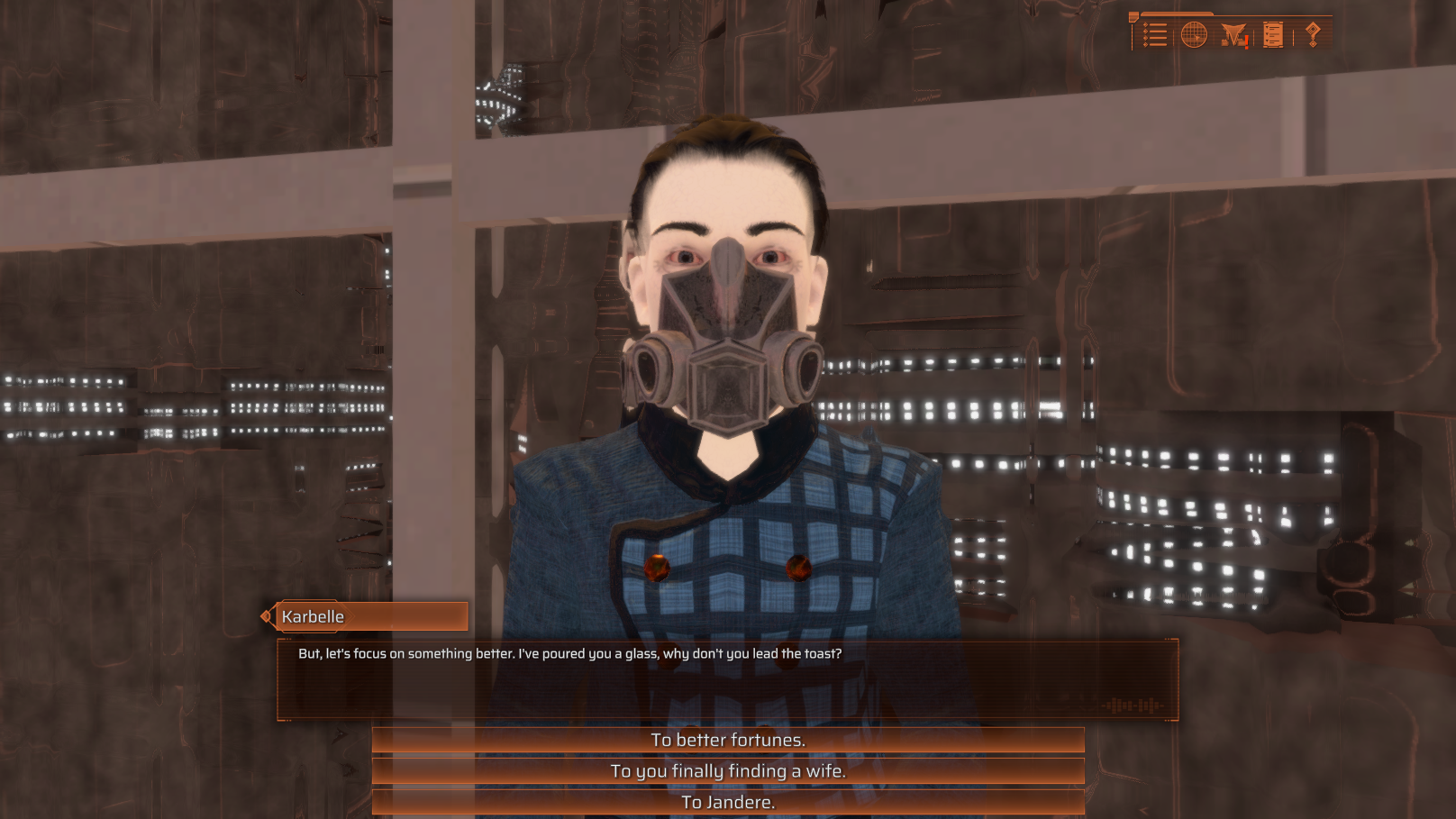 The game now has a fast travel system in the form of ride-sharing, where you can hitch rides on trains and transports at certain stations, for a fee. 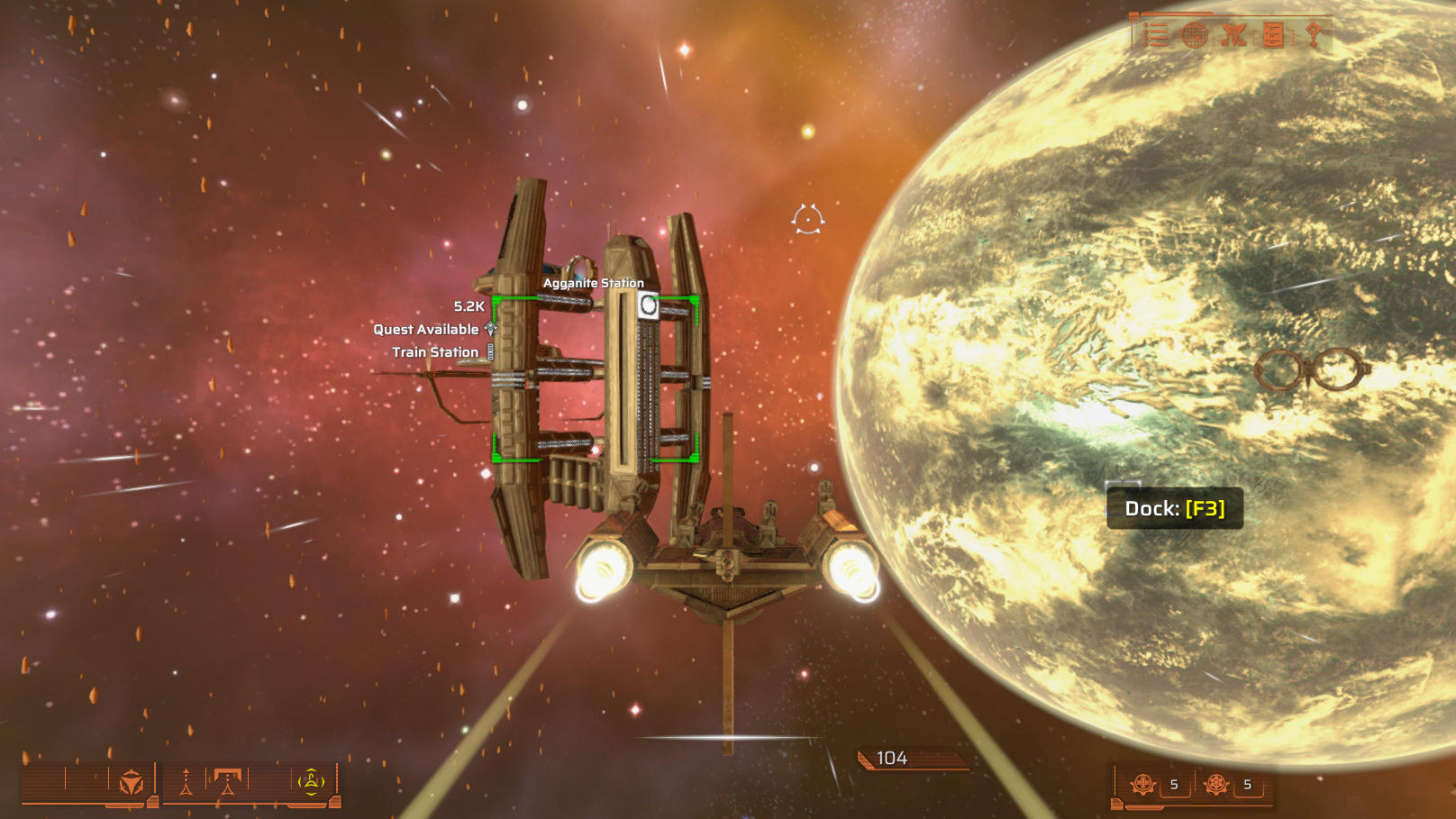 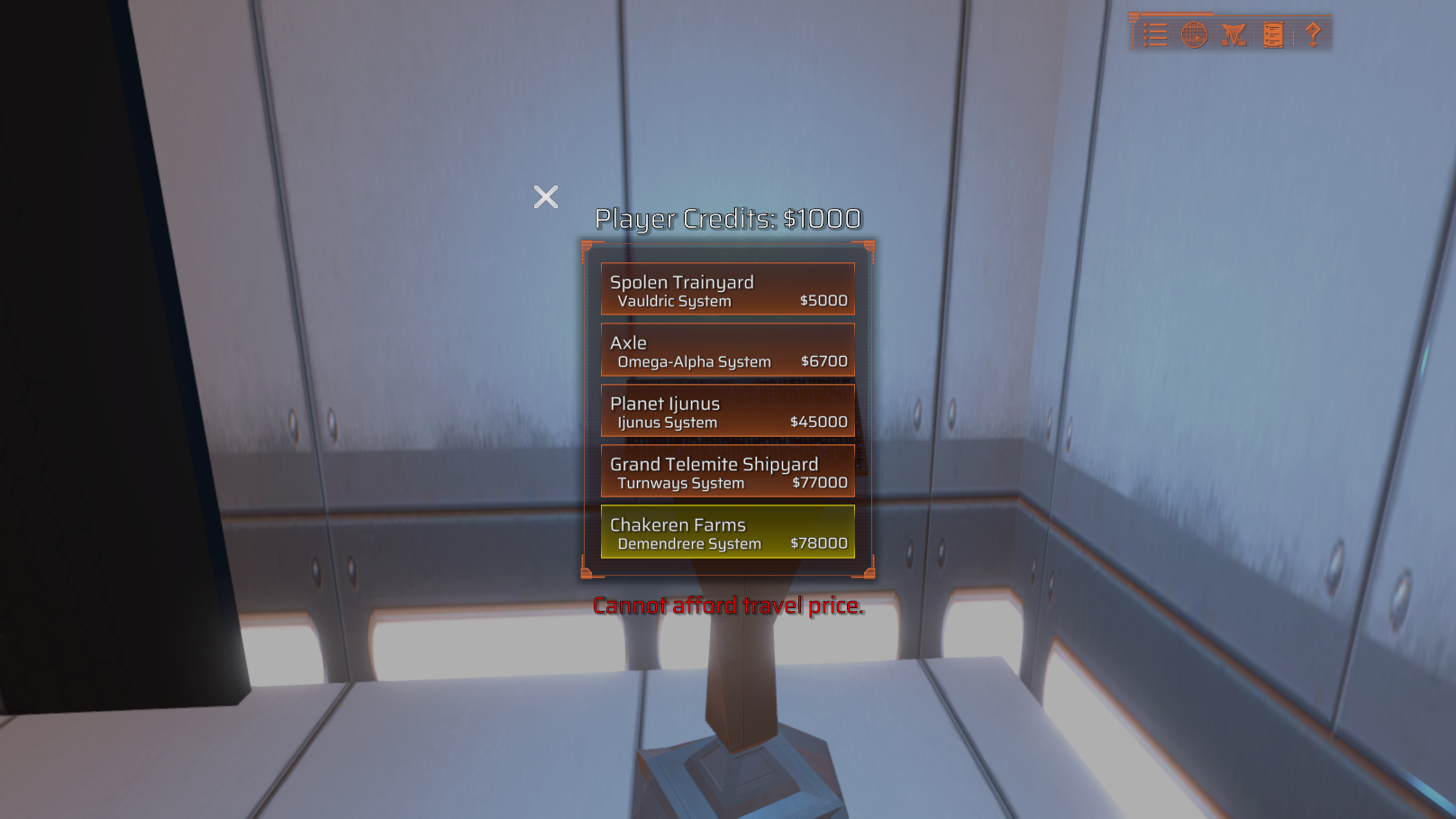 Guns also have restricted firing angles now. Lining up your targets is much more important than before.

And there can now be restrictions when trying to undock from a station. 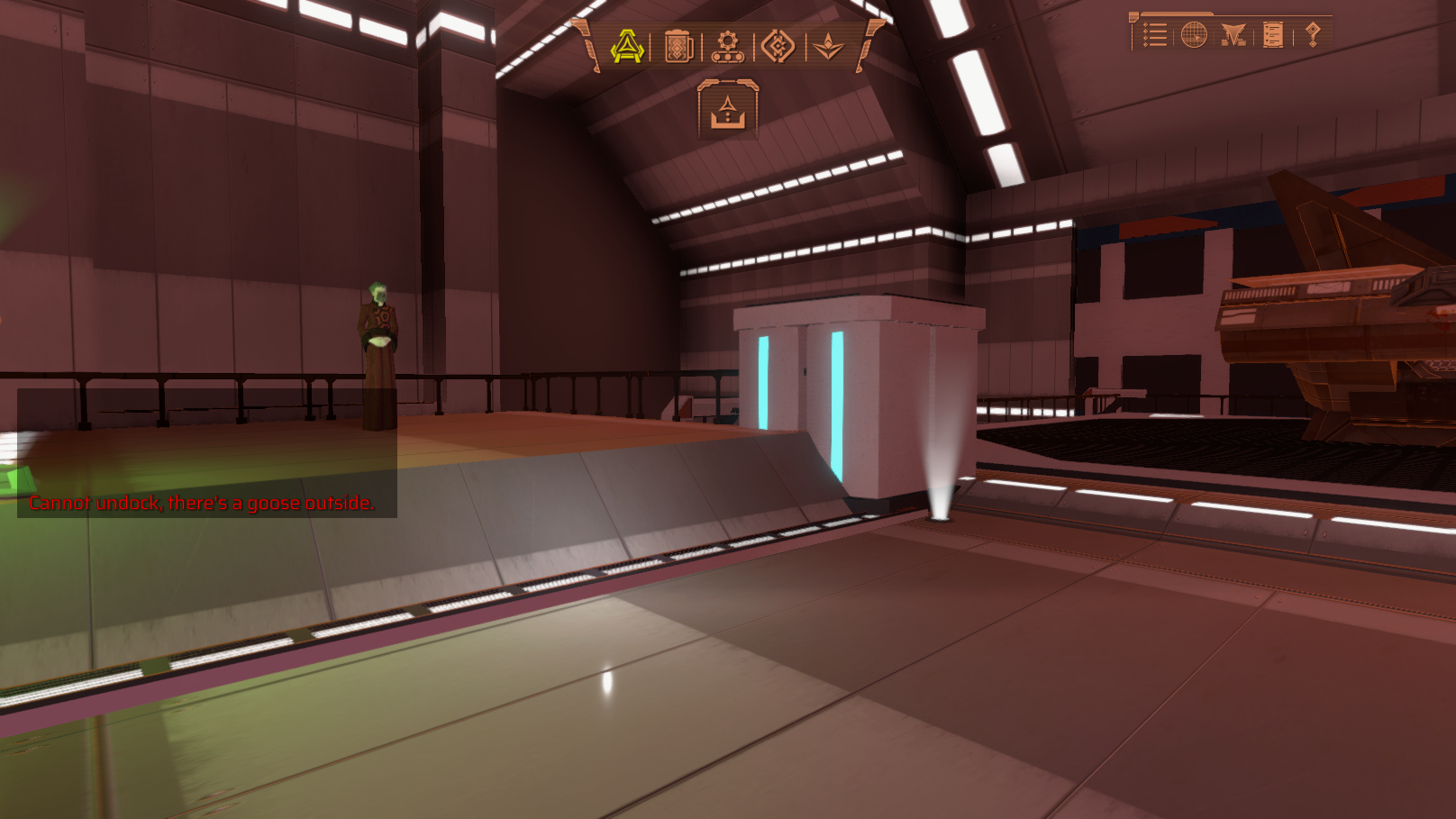 I also added a few UI improvements too. Storms now recolor (if the option is enabled) your UI when you enter them, while the station UI gained a few new little animations to help it pop some more.

With all those new scrap models available, we went back over some scrap-related vignettes and redid them to have those aforementioned models, upping their fidelity by quite a bit. 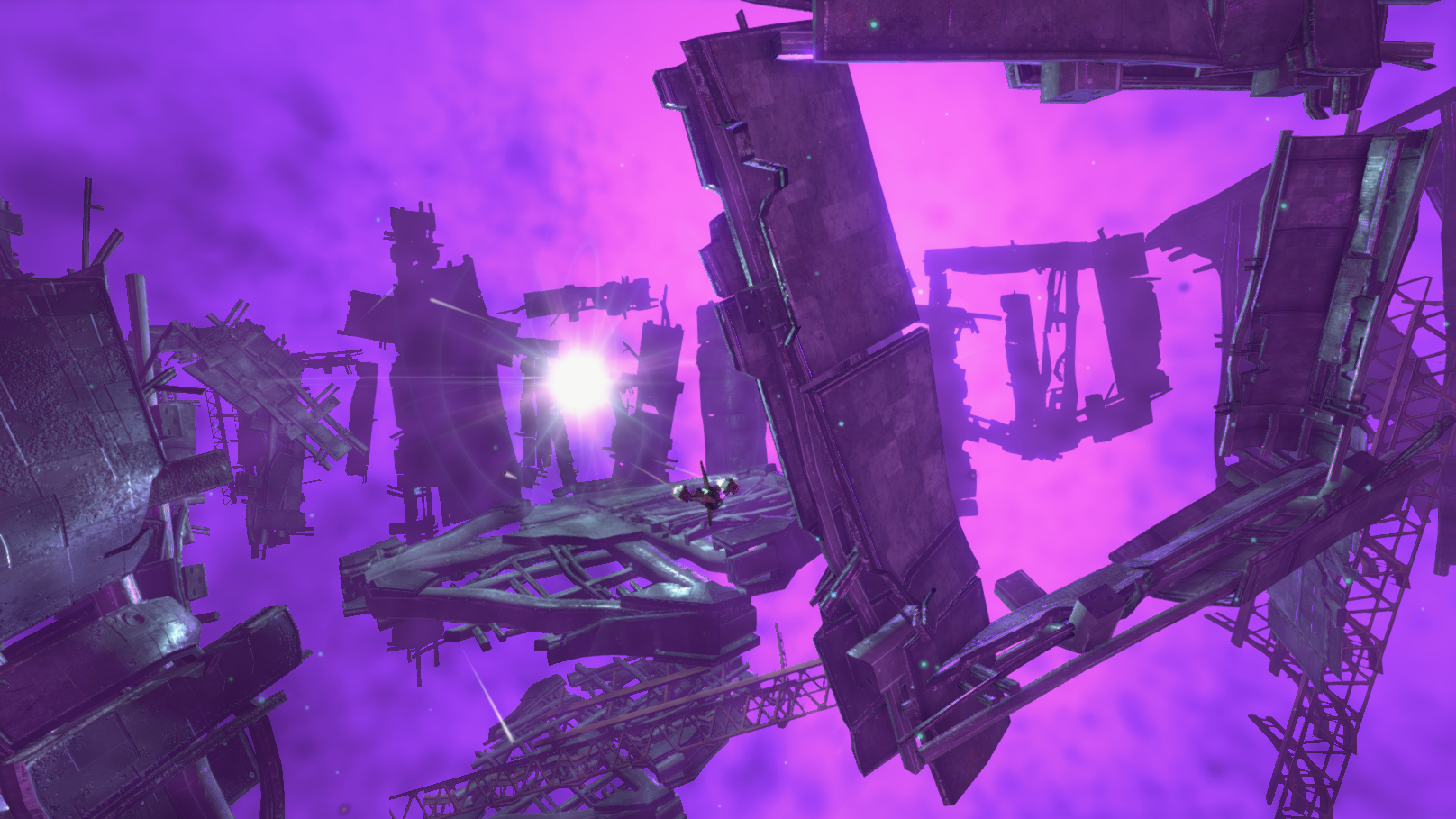 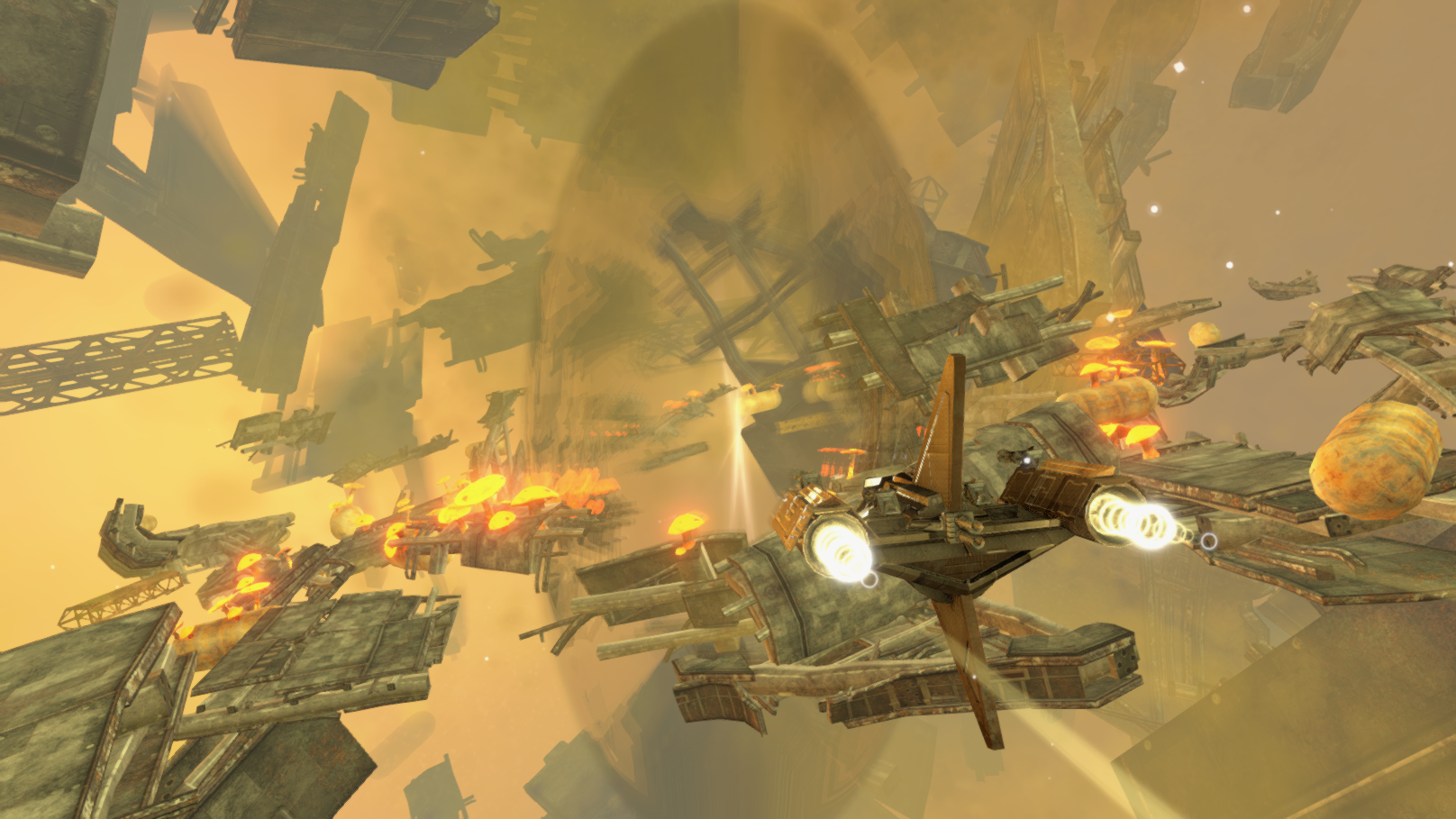 That’s all for this month! It’ll mostly be writing and questwork for next month’s progress, but I’ll see if I can’t give you a space mountain or two as well.