We have the Tunnel Network (revamped from Generals) and the Tiberium Silo to show off at C&C 3: The Forgotten. For those who speak German, we also have an interview with C&C Saga, the leading German language fansite.

We have two new structures to show off today over at C&C 3: The Forgotten, as well as an interview with the German speaking community. Those of you who do speak German will want to head to CNCSaga.de for our first ever foreign language piece. In the interview, I provide some background on both this mod and our other mod, The Red Alert, as well as modding for C&C in general.

For those who prefer English, we have the Tunnel Networks to explain. For The Forgotten, they work slightly differently than in past C&C games; each tunnel network node is activated by a support power, and must be placed within a certain distance of another node or of the Construction Yard. The tunnels allow The Forgotten to move up to three units at any one time across the map at high speed. They were created by Andy Littleton and Tsumetai. We also have the Tiberium Silo, which stores the Tiberium collected by The Forgotten on the battlefield.

For those who prefer the universal language of pictures, here you go, fresh shots of a Forgotten base, the tunnel network, the Silo, and an up-close screen of the Sidewinder (as always, you can see more on our media page): 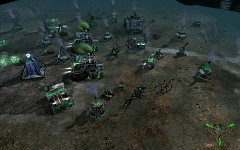 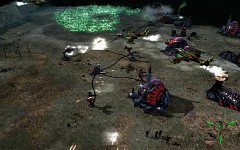 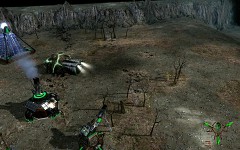 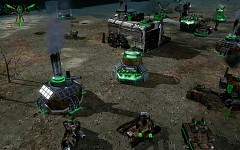 Can these tunnels be used interchangeably? I.e. you use tunnel network power twice, coud you move units between any stations, or just the two "connected" with each other (created by using the power once).

Loving the Tunnel :D great work, keep it up

Once you have tunnels, they all link with each other. So if you have five tunnels, any unit can enter or exit the tunnel system at any of the five points.

Nice. Guerrilla tactics will be feasible.

So it's like the transit hub, but you can pretty much place it anywhere.

The Tunnel Network from Generals...That was the only thing that saved the GLA in that game. XD

I have always liked Tunnel networks. half of GLAs strength came form tunnel network at least.

FOr people who want to read the interview in english, google translate works pretty well,