Whether you raided Cursed Egyptian tombs, fought MechWarrior's, got lost in the Nameless Mod's dialog, found yourself on the streets of NeoTokyo, did some Research and Development or were mysteriously followed by a giant ball. It is hard to deny that 2009 was a brilliant year for the developers of mods and indie games, and you the players. This year 54 newcomers made it into the top 100, while 46 titles returned from previous years (which were updated in 2009, but haven't won previously) including the evergreen and everpopular ESF and Sven Coop. Honorable mentions go out to Black Mesa, Project Reality and Mount & Blade each of whom made it but cannot re-win. Without further delay, I present to you: 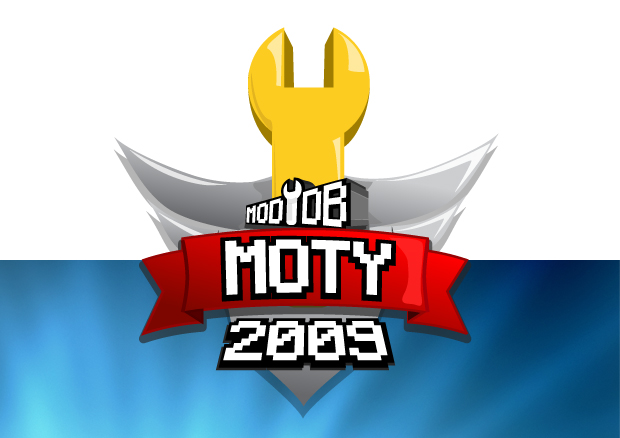 there is no general classification about mod ?
for example you take gta SA and you see what mod 1st 2nd and 3rd etc etc

Last year Place 9 of the released mods with the Final 1.1 Version. I hope that we can do something like this this year too in the upcoming mod section with our new project^^

Thanks to everyone who have voted allready for Stargate Empire at War!

I'm surprised that only 3 indie games made it, that's crazy! I'm quite excited though that Platinum Arts Sandbox was one of them. Thanks so much for everyone's support and heck maybe some year Sandbox can even beat out Last Man Standing Coop :D WOO HOO. Take care and best of luck to everyone who made it into the top 100!!!!!
-mike

Indie games are handicapped because they cannot surf on the popularity of their parent game. When someone wants a shooter, they look for HL2 mods, not for indie games.

Between this and the crazy amount of work needed to make a decent indie game, one has to wonder who even wants to do it.

That's also why it is kind of sad that so many unreleased indies are in there, while the ones who worked hard and released aren't in there. Such is the way of things though I guess. Take care.
-mike

This is the Warcraft 3 mapper's problem. Too many mods, not enough players (and too many commercial games to compete against, too).

We failed ! What the hell ! I think im gonan throw my project "Reallife:TG" into the dustbin. mannnnn ...

Congrats for the others !

I think it's unfair there is only a few indie but hundreds of mods. It doesn't give indies a chance to get in. Good list anyway a lot of the same mods again though :S but some nice new titles. Make more indies next year i want to get into it with my indie title Bounce! :D.

This is Moddb, not IndieDb. Its expected as always unfortunately.

We plan on rolling out an indie of the year awards so that way they can be properly recognized next year.

Perhaps a whole "sister site" is in order for featuring Indie Games? If at all possible. It could be a great idea if you can manage it. I know this community would love and appreciate it!

More expanding to other games plox.

I really don't think that is right :/ more or less makes it seem biased.

To be honest, I really do not believe some of the HL2 mods up there deserve it compared to some other mods that got ousted because they do not have the luxury of such a ginormous community from source. I saw that those mods had gone out and advertised on quite a few websites to get votes. Yet they still could not oust the power house of source.

I can see source getting quite a lot of mods, but this is just a bit ridiculous. Give some other mods from other games a chance.

I would also like to add that quite a lot of those 6,000 mods are mods prone to failing, more or less wanna be modders. Though, maybe thats just for some of the games I pay attention to, not sure about all.

Nauz, youre so intelligent!

Yah it's moddb :p but still with Desura around the cornor they need more indie titles to bring in more of the world :P.

This is the Top 100 "Players Choice" People! lol... The 100 titles both mods and indies are what YOU the Players have voted for! Please don't shoot the messengers! :P

Wtf! Where Dangerous World ? I thought it would be in top...

C'mon, win something this year finally. Let this be the swansong of Diablo II.

Where is Project Reailty?

It won last year, so it cannot re-win.

It can, but only after a significant update.

Vote for Primal carnage and we will release something special! -Cheap pop lol

to be frank, the competition was full of good surprises.
had a very good year.

Congratz to the teams who got fans to vote.

Awesome! im so happy that research and development won :P

Thanks to everyone who voted for Frozen Synapse - Moddb.com We'll have some more free stuff to give away on our page soon...

My mod didnt make it.... damn...
Well next year will be different!

How many votes do I have? I've made 7 already? I thought you should just vote 3? What's the rules?

I have voted for 6 games in best released and four in best upcoming. But it seams so strange, have many votes do I got?

But I have voted for 10 mods, how does that add up?

Glad we made it into the top 100, all I can really say is, I appreciate the support for those who voted. Good luck to all teams

Mods that got a major update in 2009 also qualify.

The Freeworlds: Tides of War team is honoured to be in the top 100 mods for two years in a row. We're deeply thankful for all the support we're received thus far!! You, the public, rock!

Company Of Heroes : Eastern Front will win this year, but I still hope Resistance & Liberation to win! But It's still obvious that RnL will be laureate next year. Anyway, this year is for unreleased HL2 mods. Find and search Zeitgeist, The Rising, SHIFT in TOP100 list! They are superb!! p.s. Natural Selection 2 to win in Indies!