Hello, all of those silly followers who still believe that this mod is going to be good or even entertaining! No, seriously. I hope its going to be awesome. Anyway, mod entered phase of active development (although only two people are currently in dev team) and started to have news every week!

SMG that is not "the favorite one" of most CS:S Players. Current Post-Apoc version is mixage of UMP45 model and some homemade foregrip and AK stock. Seriously - It looks terrible and it will be probably replaced - if atleast 50% of users that will submit on this update will agree and like it, it will stay.

Texture is just TERRIBLE PLACEHOLDER and will be replaced soon.

Weakest CT SMG that almost isnt used. Postapoc version has homemade silnencer that will probably stay to full release. Current texture is placeholder and will be replaced soon release. Focus on model. 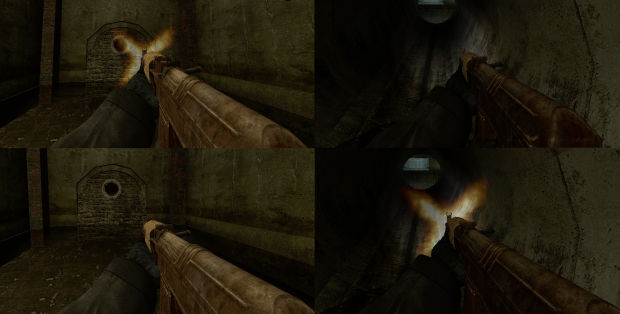 Oh, and last - biggest update. Development Studio has finally its own page, so check it out

I don't like the UMP model that much( that barrel just looks terrible on that gun ! )... but I like the TMP !

I believe that the UMP is a bit unproportional in regards to the grip being to small.

I have to a agree a bit on killer. The Ump doesn't look to good.
But still, not bad on the texturing.

add a bit of detail to the UMP and its probably the best model of a postapacoliptic gun ive seen!

I think that this mod is just pointless, as its not gonna do any changes to gameplay mechanics. Sorry guys, its just my opinion... :/

Well, i hope we will find some scripter. Anyway, there will be new maps, skins, sounds, GUI :) And hopefully even some gameplay change :D

Thats not an AK 47 dude its a Czechoslovakian SA vz.58 & yes it is different from AK47s in that the mags are different & so are the internal mechanizes. On top of that this gun does not have to be reloaded by changing the mag as most of the time ppl just pull the bolt back & load it with 5-10 round stripper clips similar to thos used in SKS carbines.

The model it self is very well done & their is no denying that :)

here are some pix of the real thing as well as a web site with some basic info.

I know everything about it :) I even shooted from one and i can tell you its superior to AK47. But it wont make sense to call it Vz. 58 as it still looks same to most of CS:S players. And all guns will be called with their IN-GAME names. So if i will decide to do L85 for AUG, i will post it here as an AUG. _:)