Let's start right away, with Nod's most basic Defense: The Laser Turret. 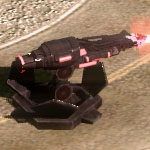 The Laser turret is Nod's basic defense, employed to destroy both Infantry and Vehicles, unable to engage Aircraft however. While inactive, the weapon is safely stored underground, and only pops up to attack. While stored, it is also Stealthed. Can be upgraded with plasma pulse cannons for greatly increased firepower, the range however remains unaffected.

---
Next in line would be the SAM site, Nod's anti air defense. 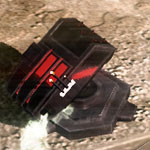 An upgraded version of the SAM site of the 2nd Tiberian War, launches short range heat-seeker missiles with a limited artificial intelligence on board for greater efficiency. It is mounted on the same base as the laser turret, due to the size, it cannot hide underground, but Stealthes while inactive nonetheless.
Upgradeable with Medium range missiles for increased firing range.

---
And here goes Nod's most heavy defense: The Obelisk of light. 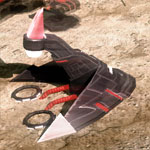 Almost a Tradition in Nod defense technology, the Obelisk of Light is in service since the First Tiberian War, back in the middle 1990s. The Obelisk uses a set of energy fields and high power capacitors, as well as a massive lazing crystal to create a immensely powerful laser beam, which instantly vaporizes most ground targets, only GDI's most heavy units, like the Mammoth tank can survive a direct hit of this monster of a scorpion tail made stone. Due to the relatively low rate of fire, turbo-capacitors can be installed to increase the rate of fire.

---
And last but most definitely not last: The stealth generator. 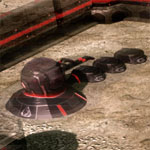 GDI fears it, Nod loves it: The Stealth generator allows Nod to cloak entire bases from the ever-present eyes of the GDI, not even the Philadelphia can break its cloak without focusing all sensors on the base. But without knowing Where it is, it would not be of much use either. The generator emits a massive Lazarus energy field, both GDI and Nod high power sensor arrays can penetrate this shield.

Here is a screen-shot that depict all of the Defenses: 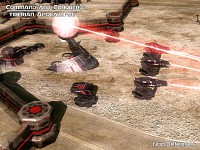 That would be it for Today, but be assured there will be more soon(tm).

I like it. Definitely a good throwback to the venerable old TS while adding in a few new touches. ^^

Good job on the Obelisk crystal, I know everyone was talking about modifying it before, but that right there looks right.

I love those upgrades :D

..woot :D another month to wait for a update :P

Hmm? What role are the laser turrets for? Anti vehicle or Anti-Infantry? Or both? if both, what can the obelisk do that is different? Is that laser just stronger?

And if the laser turrets are just one role, what's the other defensive structure that counters the other? And the obelisk can't be the counterpart, it kills everything on the ground, and is too expensive.

And yes, I am an experienced C&C player, you just need to clarify a few things.

essentially the laser turret and the obelisk have the same role: killing ground targets, means vehicles and infantry. But the obelisk deals more damage, fires slower and has greater range.

Also, I'll try to do it at least, the Obelisk will prioritize vehicles.

Classic ^^ I have a question - these defences are hiding themselves after firing (as in Tiberian Sun)? :>

The Laser hides underground and cloaks while not firing, the SAM site simply cloaks :P

The Laser turret is more protected while in the ground too.