It's been just under a month since the last UEAW Dev Blog, and we've certainly been busy during that time.

Posted by evilbobthebob on Jun 6th, 2010

First off I'd like to apologise for leaving it so long before I wrote this blog. Mostly it's because a lot of the work we've been doing on the mod has been "invisible", related to gameplay and balance. It's also because I've been too busy actually modding to write a news post.

Secondly, I'd like to formally announce something rather important:

We are hoping to release the mod sometime in early to mid September. This is because two of the primary team members, myself and LTCC, will be going to university, so obviously we won't have as much time to devote to UEAW.

Although a lot of the things that are being worked on are behind the scenes, I'm sure you've noticed some of the nice images that have been gradually appearing on our media section, mostly courtesy LTCC and his excellent engine particles. 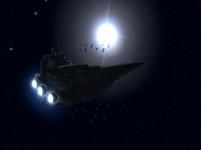 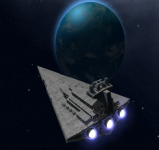 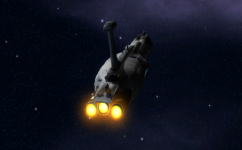 
Related to the CIS images that have been appearing, I'd like to draw your attention to a little-known ship that we will be including for the CIS faction. The ship, seen below in the top left of the scene, needs a name. We have a shortlist on our forums, so if you want to influence the decision, head over to our forum via our offical page link on the right. 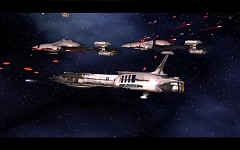 A little more background on the ship: it appears during the Battle of Coruscant in Episode III. Watch the scene carefully, and you can see it quite near the Invisible Hand. Because there is almost no information on it, we have decided to give it an armoured carrier role due to the heavy plating that replaces the standard Recusant spine. It will have fewer weapons emplacements than the Recusant because of this. Here's a direct comparison of the weapons loadouts:

Questions and comments are welcome, as usual.

i saw the ship in the clone wars
how about Recusant MK.II
because it seams to be an improvement ship

It's being named, and it's not a direct upgrade as such - she has hangars and extra frontal armour, but sacrifices some of her weapons mountings for this; an armoured tactical carrier.

but as you can see. just adding a few boxes to the model makes it look awesome. could you try to do something like that? thanks. awesome mod btw :)

Our ISD already has over 12,000 polygons in the model. I made it from the original schematics in The Essential Guide to Vehicles and Vessels. If you look at some of the other images of it like here: Moddb.com

you can see that it is in fact rather detailed.

Simply, adding more boxes would increase the polygon count a lot more than you would expect for little to no gain.

looks great. is september your release date for the final ueaw and is it with the clone wars?

September is the release date for V1 of UEaW - this is Version 1, which contains all eras and main factions (yes, including the Clone Wars), our campaign spanning all of the eras in a canon storyline and the re-made game around this; however this is space only, and no land.

Land for all of these eras comes with V2!

You should have the manevolence from Clone wars. it was wicked. you know the one with the big power sucker cannon on the side