So, here we come RMC! It is time to discuss what are we going to do with them.

We come this time to ask your opinion about one topic: the future of RMC. 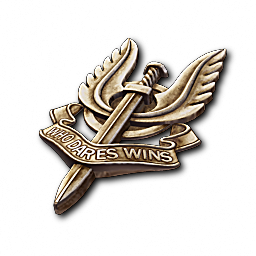 After planning and analyzing the current layout of the RMC reward faction, we do think it has potential but right now it cannot be balanced properly because of the Commonwealth faction design, let alone that causes odd events and coding, so we have concluded than they will have better chance to be improved if they are made a standalone faction.

However, it seems a lot of players wonder what we were thinking when this was added on EF, because certainly Commonwealth doesn't have anything to do in the Eastern Front theater other than lending units to Soviets... so we have this dilemma: either we make it a new faction to balance it properly or we just remove it because it doesn't fit in the mod.

Remember this is not about having as much factions as possible, because more factions isn't going to make this mod a better one, at least not that alone. This is about if RMC deserves a second chance or not and if it does, we would be able to add different content as well(as possible as the models available allow, ofc). One thing to consider is that while making RMC a standalone faction might slow down the bug fixing process and it would keep busy our balancers in a different area rather than Soviet vs Ostheer and you know what this does mean.

Depending of the outcome(your feedback + our internal feedback), if RMC is removed things will be as usual in the latest patch, if RMC is given a second chance it doesn't mean it will come in the next big patch, it could be delayed for a while depending of how Soviet/Ostheer balance goes, because that has priority over anything else balance-wise.

We already discussed this in the internal section, however, we need to hear what the players think about it so, please think carefully, cast your vote(the poll is on EF forums) and explain your point of view about the issue. I also want to point out than the feedback that really matters is the discussion and their respective posts being written here or in the EF forums and not entirely what the poll says, because counting votes without arguments goes against what we are aiming to do here.

Thanks for your support,
Eastern Front Team

keep them! it was great having the british being more aggressive instead of defensive.

Keep them, it will be much better with the RMC mixing things up.

I spotted that too. The Royal Marines motto is Per Mare, Per Terram. By sea, by land. Plus they've been around since 1664, the Special Air Service started during WW2 as the world's first special forces

SAS were formed in africa, around 1942 time i think, as an improvement to the LRDG

I think the SchutzStaffel were the first special service. And if not it was probably the Fallschirmjägers.

Except that the SS were force protection and shock troops not special operations forces like the SAS. FSJ's were paratroops intended for assault and take & secure operations, you might had mixed them up with the specials.

The first special operations group in world war II was the Brandenburger Regiment of germany, formed in 1939.

As for the first special forces of the world that would have started in china.

Remove them, I'd rather have better balanced reward faction for Ostheer than RMC which was made in a rush. Maybe in the far future there will be a place for them, but right now the mod needs to focus on polishing OH and SU factions and there is no time for RMC.

I would say, to keep the RMC in the game, as coltsfan95jdh said, they are an aggressive twist on the Commonwealth playstyle, and this suits some players quite well. Personally, i'd love to see the RMC as a standalone faction in all its glory, new units, trees, etc...BUT i know this would be hard to do/time-consuming. Maybe keep that in mind for the future. But for now, keep them :)

honestly if you keep the RMC it would be a good adition. but as ive said before it would be nice if you guys did something with the american. just one or two more units would help the faction out alot. like perhaps the us marines as a standard squad that could be built and something that can help them out with the fact that they get overpowered by the nazis armor divisions

I say keep them. If you get rid of them, I would keep some of their units, I really would like to see the Crusader be an option to replace the M5 or as a reward unit. I really liked the aggressive twist they added to the commonwealth.

just my opinion, but i'd prefer if you guys would focus your attention on the Russians and ostheer.

Have no idie, i try them once and the only thing i hate is i can't move HQ ; station HQ = dead Brit

Get them out, they don't fit the scenery, propose them on another front where they fit, BK or N44 would surely make up for it.
I'd rather take the KV-85, SU-100 and ZIS-3 back in instead of the common come and go of stuff that doesn't seem to fit at a certain point of progression. And Ostheer could rely on some reward units rather than putting effort in another hasty ambush british faction, Selbstfahrlafette L/61 and Gebirgsjäger along with the foreign support would be more worthwhile.

@M1GHTY.M4VS
Ostheer already use Gebirgsjägers in the Elite doctrine. But I think a lot of us would like to use the Sturer Emil as reward unit for the Elefant, but I think that would be food for thought.

Well I meant the Edelweiß Division that had seen action in the southern parts, they were explicitely engaging soviet mountain troops so they can counter each other pretty well.
Widowmaker made the Skins already the just need a slightly different loadout/price to be different to the KCH and Jäger.
Would be between the two in pricings, as they've seen early war actions but aren't as battered as the Jäger that imo look like the last of the best with 480 MP and best loadout.
Yet they could be good in assisting finnish forces either as they later on fought in norway and northern russia.
So that would make it Gebirgsjäger vs. Soviet Mountain Troops.
They originally forced on the caucasus region but soviets deployed them for the counteroffensive at moscow because they were afraid of the finns.

I think its a great idea with the RMC, no matter how much I love the Tommies, I can't stand their (imo) poor faction design and crappy doctrines (looking at you churchill crocodile).

RMC, please save them from being extinct! They are an endangered species! PLEASE SAVE RMC!

Keep them. You've already put alot of effort into them, no point ruining the work.

All in all it's decision about "what are we going to do with EF?" If you want to end after OH, and make new mod on CoH2(for example Western Front :]) it just waste of time. But if you want to keep working on EF, on the CoH, deleting RMC will be waste of time and quite nice fraction. I was iritated only in doctrines,they weren't suitable to practically new fraction you created, for example: RMC without fleet support? Oh, they got support of heavy artillery, sapers and commandos, wait aren't those guys from SAS? So my vote is: keep them, and keep working on them, cause that is going to best fraction in game :P

@BarTolmai
Our plans for the future doesn't include CoH2 as long as it doesn't have modding support... and there is enough time to tie loose ends for our Eastern Front mod.

It might be possible to finish the RMC re-construction before all the campaigns are done.

keep them RMC are awesome.

Improve RMC!!!!thats better than remove it...

I vote for keeping them as a new faction even if I know how much work it will cost... That way it would be easier for me to do RMC versus Commonwealth battles :p

I think go for it ! CoH in my opinion lacks a proper tribute and campaign for the Brits (okay I know that OF had a short "campaign" but that wasn't the whole potential)at least they make a nice faction ;)

Keep them I love RMC, it is better than standard!

I love play RMC ,they have cool unit :)

It would be nice if RMC will be a separate faction!

Return RMC to what it was. A 'reward' unit type. It made the British more of a offensive focused Faction instead of defense. I would like to see them in a separate faction, but it doesn't have to be. Making the game realistic to the real world is boring. I found the most fun in fighting impossible scenarios i.e., America vs. Wehrmacht in Vienna or Moscow. I personally don't care for hyper realism in games, and seeing a RMC/Commonwealth branch would be awesome(and pave the way for IJN? Now that would stick it to hyper realism fans :P).

What are the RMC? are they a british reward? Maybe I missed them... I downloaded game in september.