A great story often hinges upon great villains. Thus, it comes as no surprise that the fate of Middle-Earth has been shaped not only by its heroes, but also by its memorable villains. Two of the greatest of these villains will be the focus of this update.

Among the most terrifying agents of the forces of darkness during the Third Age was the Witch-King of Angmar, first of the Nine. It was he who led the forces of Mordor in their assault against the city of Minas Tirith, and it was his might that felled the King of Rohan. Wielding his mighty mace and Morgul blade, he nearly slew Eowyn as well until he was finally laid low. For the next version of Edain, we have reworked the Morgul Lord to finally depict him in all his dark glory and put those last movie touches on his model. 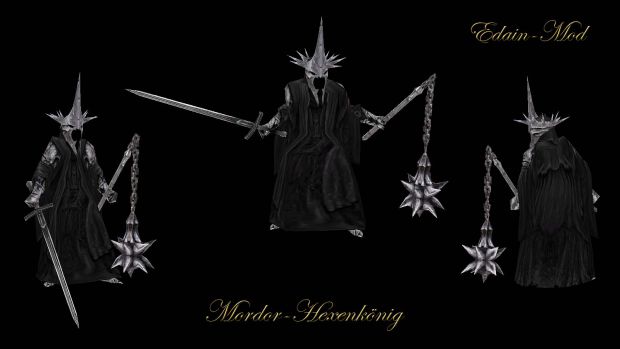 Note that ne now wields an accurate, movie-styled blade as well as a mace that is just as tremendously large and powerful as the one he used in the movies.

But the Witch-King's true moment of glory was not on the Pelennor fields. Where he truly demonstrated the full extent of his leadership and power was when he united the rabble of Angmar into a bloodthirsty force that could humble even the mighty Numenoreans. In a war spanning centuries, the Witch-King destroyed Arnor and nearly conquered Rivendell. Yet for some reason, the Angmar version of the Witch-King EA created was shamefully lacking in detail compared to its Mordor counterpart. However, EA did provide an impressive piece of concept art to work with: 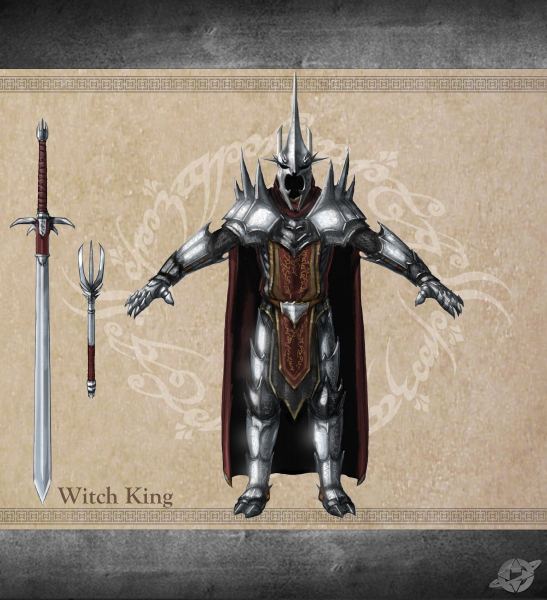 We have tried our best to realize that concept art the way it should have been. This is the result of our efforts: 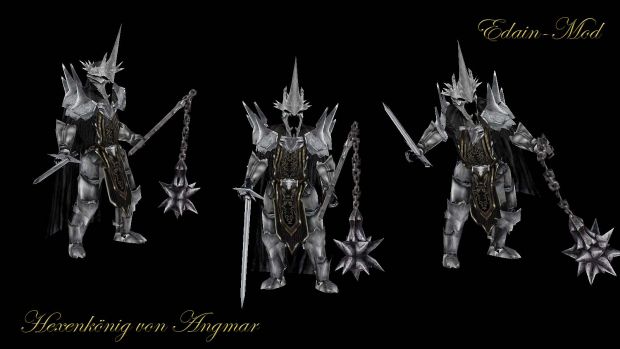 Even as the Lord of Angmar, the Witch-King wields his signature mace, a weapon no mortal could lift even with both hands. Furthermore, he is clad in a custom plate armor forged in the depths of Carn Dûm. The mere sight of this foe is enough to make most enemies flee in terror. Among his powers are such spells as Vicious Onslaught, which brings forth all the rage and might within selected servants at once, granting them invulnerability and vastly increased damage output for a short time before this fell sorcery claims their own lives.

In the grand scheme of things, however, even the Witch-King was nothing but a slave to the true Dark Lord, Sauron. While Sauron wielded great powers in the past, he was reduced to a shadow of his former self after his defeat. This shadow resurfaced during the Third Age as the Necromancer of Dol Guldur.

There is no definite source on how the Necromancer might have looked like. However, we always liked the Games Workshop interpretation of the character: 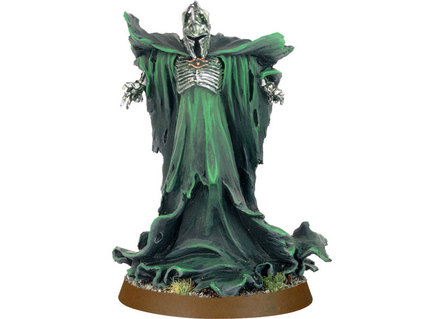 As with the Witch-King, we have put a lot of work into recreating this model as faithfully as possible within the Battle for Middle-Earth:


Deprived of his Ring and reduced to a shadow of his former self, the Dark Lord Sauron is still a force to be reckoned with. He has little physical power, but may beset his foes with powerful curses that altenately weaken them, slay them or turn them into barrow-wights. His necromantic powers increase the longevity of his servants. Note, however, that the Necromancer has to be supported by troops to truly make an impact.

We hope you have enjoyed this glimpse into the depths of darkness that will await you in Edain 3.5.

Yours,
the Edain Team

UGHH SO EPICLY AWESOME! Excellent job guys, no challenge can stand in your way.

AWESOME!!!!!!!!!!! hey quick Q, is there like a unit listing for all factions somewhere?