The last few updates to Temple+ have brought us to version 1.0.49. It was originally scheduled for release on the anniversary of Temple+'s release, but real life kind of got in the way so now it's closer to ToEE's 15th anniversary. Oh well!

For those who are new, a quick recap :)

Temple+ is an engine enhancement and bugfixes mod for ToEE. It is based on a code hooking platform, which enables us to replace parts of ToEE's original C code without having to recreate the engine from scratch. This has allowed us to do things that have never before been possible with ToEE modding, such as fixing many old and stubborn hardcoded bugs, improving the UI, enhancing the core pathfinding algorithm, adding new Character Classes, and much much more.

So what's new? Since the last update here on ModDB, we've added 2 new character classes for you to enjoy: The Favored Soul and the Arcane Archer. Favored Soul also happens to be the first new Base Class, i.e. a class that you can pick at character creation, as opposed to the late-game Prestige Classes. And as before, the added infrastructure to do that is now available to modders as well :) 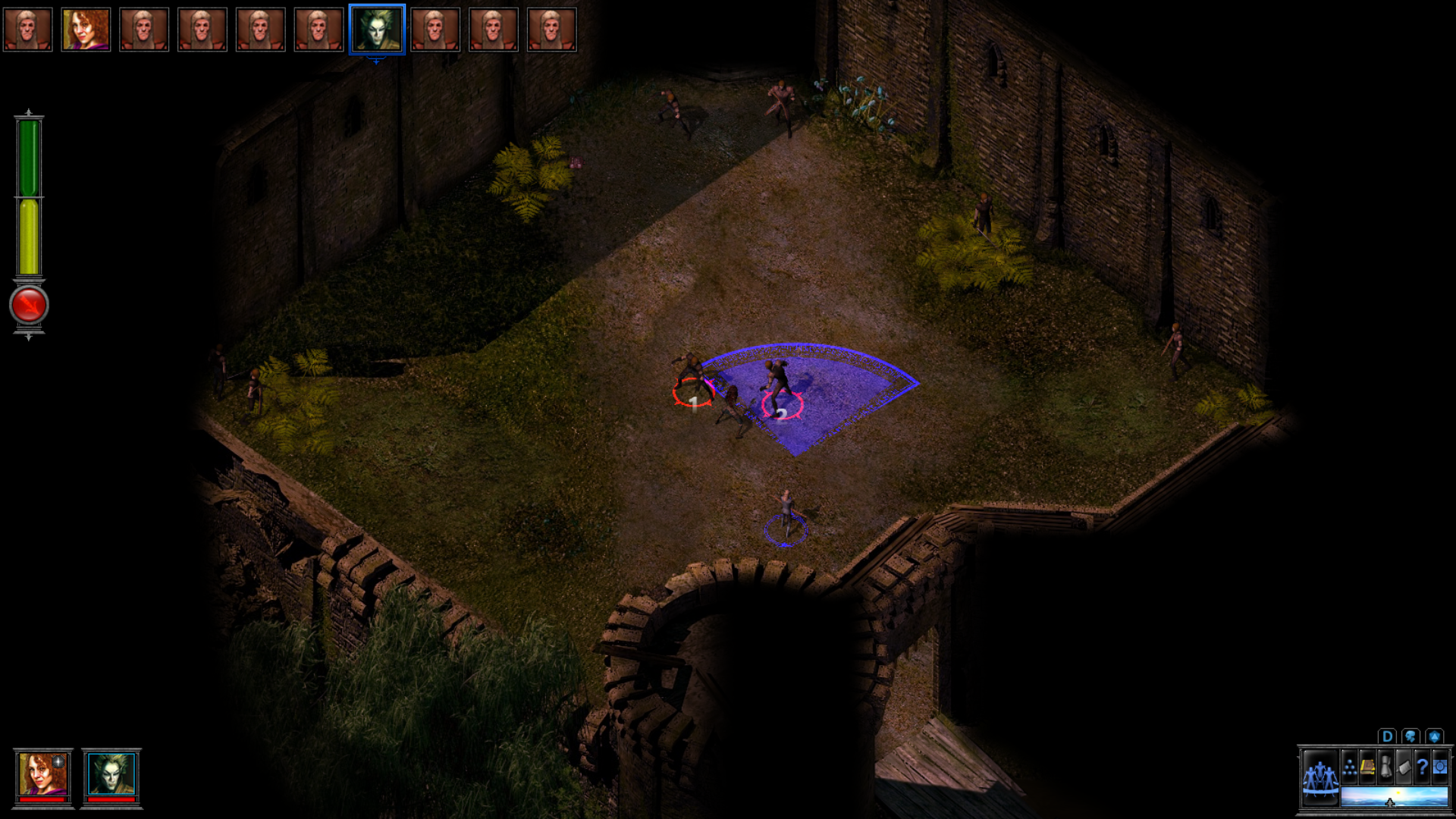 Arcane Archer in action, about to launch a Cone spell using the Imbue Arrow ability

Those familiar with D&D materia know that Favored Soul is a Non-Core class - it is sourced from the Complete Divine supplement. As such you'll need to enable it from the configuration menu, under House Rules -> Non-Core Materials.

Another spiffy new feature we've added is... the Dungeon Master! By enabling the DM in the T+ configuration menu, you'll be able to toughen up encounters on the fly by spawning new mobs and by editing existing ones. This includes changing stats, adding class levels, spells, feats, and AI type. As the DM feature evolves, these will happen automatically based on the type of DM personality, which may well include some sadistic bastards... 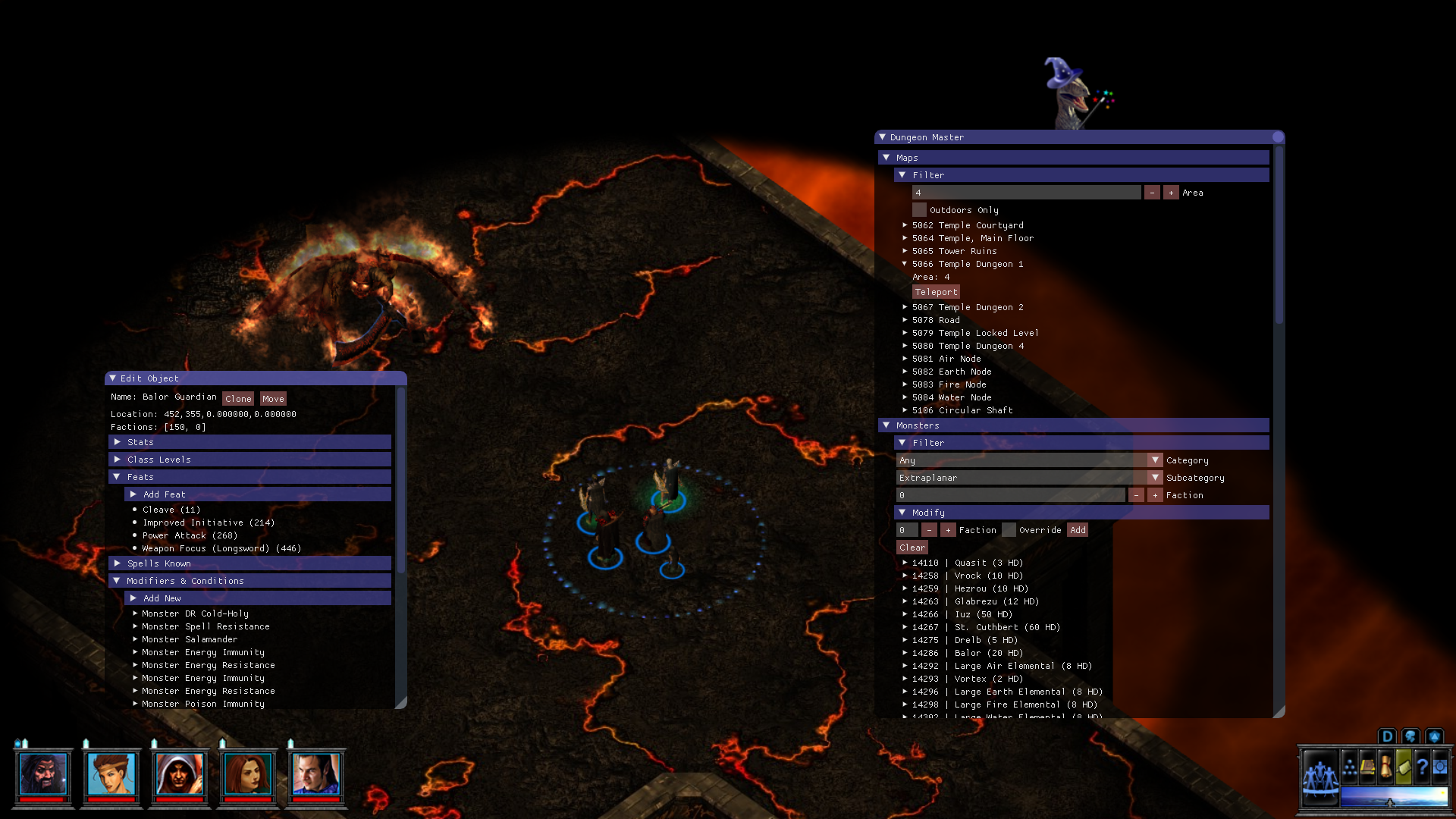 That's not all though - if you're up for a challenge, check out the new option for importing Rival Parties! Yeah, dishing it out on some hapless bugbears, anyone can do that, but let's see you pick on someone your own size, eh? 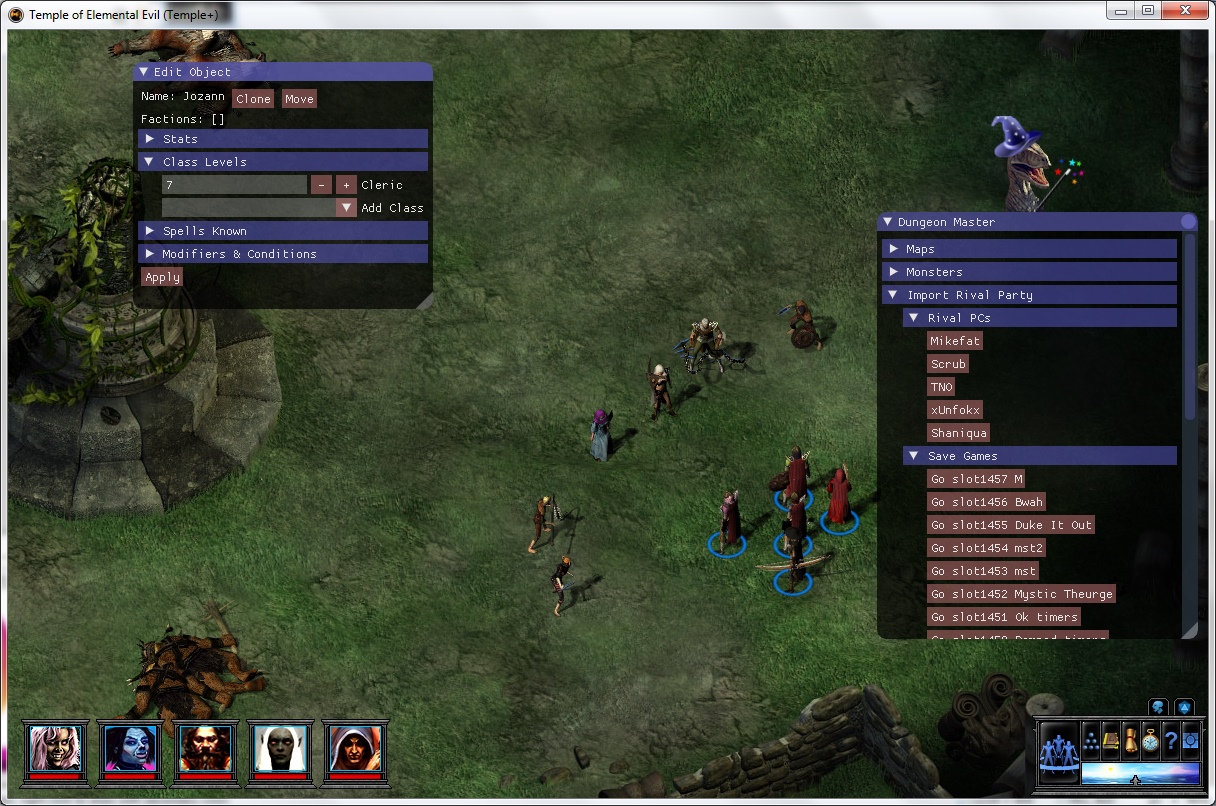 To that end, the AI also got a little lovin' this release: it will now sensibly use 5' steps - e.g. to take advantage of Full Attacks if the target is just out of range. It will also sensibly forego 5' stepping away from low threat critters - Balors shouldn't back away from something out of Summon Monster I... The inner workings of mobs alerting their comrades to join fights also got an overhaul - the engine will now be able to alert AIs around corners, and even through closed doors if you choose to enable the new "Alert AI Across Rooms" Houserule option.

For all the potential modders out there, the abovementioned feats also showcase the new scripting capabilities we've added for defining feats, sub-feats, modifying action costs, and a bunch more under-the-hood stuff you might have dreamed about ;)

On that note, a number of folks have shown some interest in adding new spells. As a result of the back-and-forth with them, Temple+ now sports vastly improved support for 3rd party additions to many core game files (such as the infamous protos.tab). This is accomplished through "extender" files placed in the appropriate folders. Sadly none of the would-be spell modders carried through with it - modding is tough business, eh? - but the infrastructure is there for anyone who might be interested in pursuing it!

Winston Schnozwick's Psi mod unfortunately suffered a similar fate as the spell mods, but everything he's done still remains publicly available at Github.com if anyone wants to pick up where he left.

The often requested ability to have multiple portrait packs is finally here, once again using the extender files approach. For the common user, we're going to release .dat files versions of the Co8 portrait packs which you'll just place in your ToEE folder! This also makes it easier to add your own portraits without conflicting with other portrait packs. See this wiki page for more info. 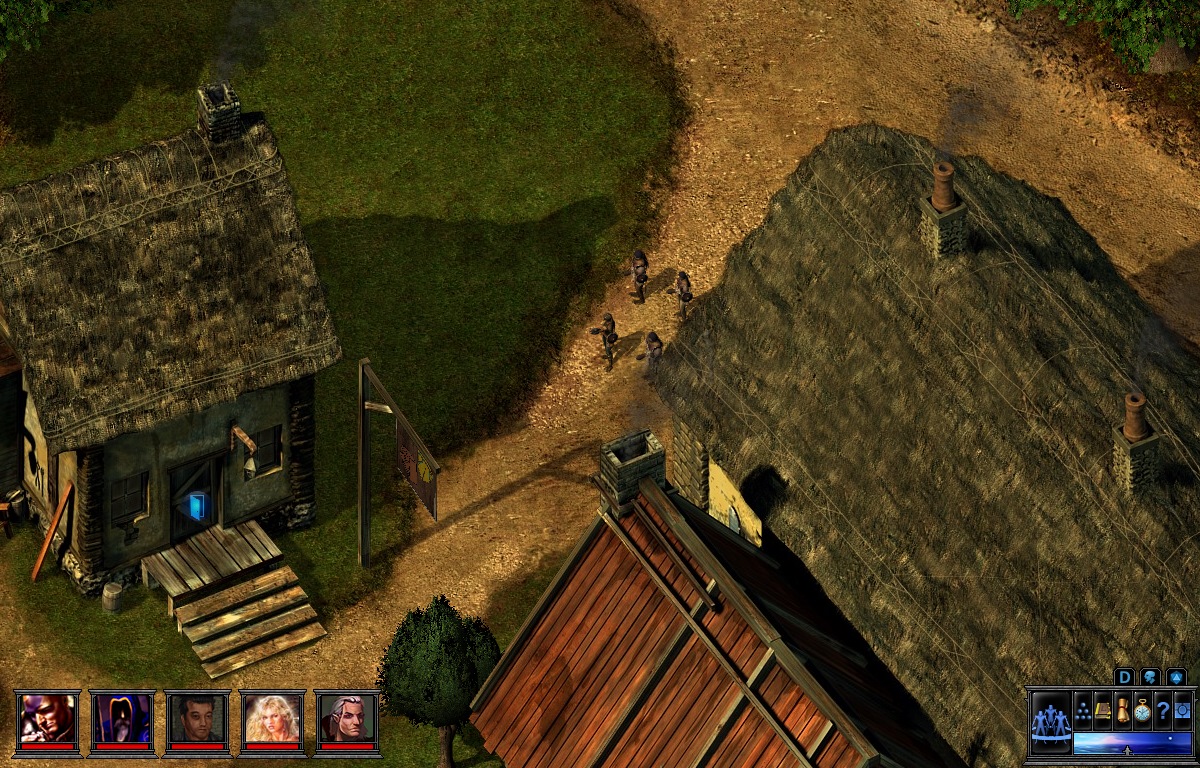 We also have for you more configuration options, including Fast Sneak Animations, Cursor Lock in Windowed Mode, and lax rules options for loosening alignment restrictions, multiclass XP penalties, and crafting items without the spell requirements.

Besides that, a slew of fixes were made, including the infamous Infinite AoO bug with Invisibility Sphere / Greater Invisibility / Sleet Storm. This has also allowed us to restore Sleet Storm to its former glory! We also had to fix some of our own messups *cough cough*, but hey, you can't make an omelette without breaking a few eggs... Along the way we've also added some necessary polish for the new stuff, including help entries for the new classes in the in-game wiki.

What's next on the horizon? Well, first of all, we must confess that large updates will take more time, since we have less of it to spare these days. The arena we mentioned in the previous update for one... but hey, even Grimoire got released eventually, so just be patient and rest assured good things will come in due time :)

Once again thanks to everyone who reported bugs and requested cool features. Nearly 15 years after its release, you're helping make ToEE the greatest D&D engine out there!

Improvements:
* Added Prestige Class: Arcane Archer
* Added new Base Class: Favored Soul (Non-Core class, don't forget to enable this in the configuration!)
* Added Dungeon Master option - allows you to spawn and edit creatures, teleport to maps, and import PCs from other savegames as rivals!
* Improved Pickpocket feedback
* Lax Rules now lifts alignment restrictions with respect to party alignment
* Lax Rules cancels multiclass XP reduction penalties
* Added Arcane Spell Failure roll to roll history console
* Added feat Melee Weapon Mastery
* Added feat Rapid Metamagic
* Added feat Practiced Spellcaster
* Movement speed now equalized (irrespective of model scale)
* Added Speedup to console cheats menu (to increase party member movement speed)
* Added House Rule: Fast Sneak Animation
* Added House Rule: Disable door re-locking when returning to map
* House rule "Disable Crafting Spell Reqs" will now also apply to Wondrous Items
* AI will check for nearby combatants before using potions (to prevent taking AoOs)
* Added support for modular portrait packs
* Capped scrolling speed to 66 FPS equivalent to accomodate fast modern systems
* AI will now sensibly take 5' steps (e.g. to take advantage of Full Attacks if the target is just out of range)
* AI will now regard threat level before taking 5' step (i.e. it will disregard things such as low level summons when deciding whether to back off with a 5' step)
* Improved AI combat activation (KOS AIs will trigger others who are within sight or a short pathable distance, so no more triggering mobs one by one e.g. in emridy meadows)
* House Rules option to allow AIs to alert each other across rooms (i.e. through closed doors)
* Cast defensively will be disregarded if there are no threatening critters (it's annoying when you fail the concentration check when out of harm's reach just because you forgot to turn it off!!!)
* Camping will now consider HD for healing rate (so animal companions don't require a huge amount of days to rest).
* Resting for 24 hours or more will trigger accelerated healing if you have a Druid or a Cleric in your party (to approximately account for casting healing spells in between rests - benefit is calculated as Cleric spell level * 5 or Druid spell level *4. Yeah I know it could be more accurate, but meh).

UI:
* Replaced Console with a spiffy new one with menus
* Character Creation UI: Added ability to right click on rolled stats to assign them
* Added option to lock cursor to window
* Added ability to ctrl-click or alt-click on the Skill increase button in PC Creation to apply 4 increments at once

Fixes:
* Fixed Death Ward blocking all spells when cast as a Death Domain spell
* Fixed Protection from Alignment protecting against non-Enchantment spells such as Phantasmal Killer
* Fixed Invisibility not getting properly removed from Dispel Magic
* Fixed Invisibility permanency glitch
* Fixed Invisibility Sphere missing Dismiss Spell handler
* Fixed Undead getting Plant immunities (e.g. for spell Entangle; this bug affected Co8 installations due to a holdover from the early pre-patch days)
* Fixed bug with Pickpocket (where NPCs could steal your armor right off you)
* Concealed enemies (hidden or in the Fog of War) will no longer display the targeting circles for AoE spells. (visual fix only - they will still be affected by spells cast if they are within the AoE). Lax Rules overrides this :)
* Assassin Arcane Spell Failure implemented as with Bards
* Fixed Shout spell damage type to Sonic (credit for Kosiciel)
* Fixed Mind Fog doing a Fort save instead of Will save, and wrong spell school in its short description
* Fixed mc_subtype_water in protos.tab parser
* Fixed Monster Subtype Fire dealing 2x damage instead of 1.5x from cold
* Fixed bugs with Boots of Speed (wouldn't reset uses per day when resting, and would replenish uses per day when unequipped)
* Fixed issue with charmed KOS monsters when their charmer is no longer present in the party
* Fixed issue with Greater Invisibility / Sleet Storm / Invisibility Sphere infinite AoO
* Sleet Storm restored to vanilla state in Co8 (has a lasting effect, and no 2d8 damage for metal armor wearers) since the AoO bug is now fixed
* Fixed issue with Tolub brawl (initial state was sometimes buggy, made sure to reset it on brawl start). This also allows recycling the brawl procedure.
* Fixed spell Aid not giving +1 Temp HP per caster level
* Fixed spell Resist Elements wrong duration
* Fixed bug with lingering Grease spell effect
* Fixed bug with lingering Dismiss Spell entries
* Fixed bug with music sound stream allocation that could cause crashes and perhaps causing the music not to start sometimes.
* Fixed spells with concentration being ended by movement/5' step (will now only end when using the Run action)
* Improved Unarmed Strike will now prevent taking AoOs when doing a Trip attack (arguably a fix)
* Fixed spell Calm Emotions - will now prevent carrying out offensive actions against unfriendly creatures (rather than friendly ones), will dispel correctly when hostilities are taken, and particles will end correctly.
* Fixed inventory tooltip display of Keen weapons' critical threat ranges
* Fixed Home key / clicking on portrait not centering the screen if Scroll Acceleration is off
* Fixed Unconscious enemies triggering AoOs / Tumble checks
* Fixed Ghoul Touch not allowing the direct target a saving throw

love what you're doing man

Thank you guys! Never played the game at the time, now that i´ve found your awesome work feels like the perfect time for a first playtrough!!