Greetings, here's our update for the last 3 weeks of development:

This is the 1st iteration of the General Shoppe in Town. The shelves were also created this week. And the Merchant Chicken (placeholder), who runs the shop.

This is the blacksmith's building (WIP) that has been worked on for some time now. Finally, it is polished enough for eyes to gander.

On a side note: you can destroy your shoes rapidly by running around in the forge, though, currently, not taking any damage yourself.

The bartering system has begun and has reached a functional point. It’s still a WIP as there are a few bugs and there’s a lot that can be done to improve feedback to the player. Here’s what we have now:

The pitchfork is an equippable weapon, later to be used as a tool (once it’s coded).

(Preview of a very-much WIP Robe.) 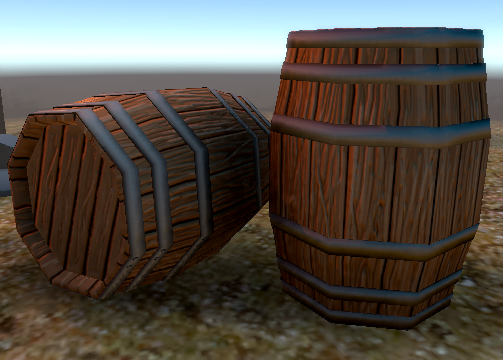 Reworked some barrel textures. Specular map was not made yet in this screenshot.

The basic trap systems have been started! Certain containers can now be trapped. When opening a trapped container, the trap will be triggered with an audible click sound as warning. Currently, the only trap is the bomb trap, which throws a bomb out at you. There will be others in the future.

The arena matchmaking bulletin has been revamped, providing a bit more feedback for team setup. There’re now icons displayed for the amount of AI combatants (skulls) and players (crowns) on each team. The icons are placeholder at this point.

(The 1st mounter becomes the ‘driver.’)

Have a good week everyone!

Nice! The merchant chicken tho :')