Here's our update on development since our 1st public demo's release back in March:

Jon has setup the attack directions/types to be passed with damage events. Thus:

Heftables are now setup to damage what they hit by velocity. This allows mages to whack opponents with a crate, while using Telekinesis. 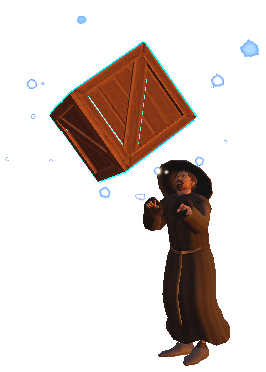 We have also started experimenting with character hefting! Here’s a little preview of it:

Aside from updating the project (to Unity v5.6), Jon spent time setting up some differing NPC types. In the demo, he had only begun the avatar system and just figured out how he was going to go about setting up variations of NPCs. He did not want to make prefabs for every single variation, as there would be way too much overlap in components, and it would certainly be a pain to change any value on a component that they shared. His solution is the creation of ScriptableObjects that he calls Decorators. The Decorators simply apply or perform a specific set of instructions (e.g. set avatar hair color, give & equip sword, etc.) onto the base instanced NPC prefab via a middle-man script (MonoBehaviour). In other words, the middle-man script spawns the instance and applies the Decorators, setting up the instance.

Each NPC-type, for example an Alchemist, will appear in different clothing than a standard villager. They will also be more likely to give you information related to what they do, such as potions and alchemy for an Alchemist.

Jon has made an Alchemist, Smithy, Merchant, and Guard. They’ll each have a high chance of saying some different things more related to what they are and will have different attributes and equipment as well.

Unfortunately, he has also replaced the chicken merchants with actual merchants. They will be missed… For now. :)

We added some new props with functionality! The braziers can be lit, if you are carrying a torch.

I have been going back through some of the weapons & polishing up their appearances. The broom, for one, had a noticeable crease at the bottom (the frilly end) which has been smoothed/merged into one mesh & material.

Some more weapons that saw improvement.

We have setup a new skybox where we can manually tweak colors throughout the day cycle. The default Unity skybox didn’t quite capture some of the colors we were aiming for.

Some results so far. (WIP)

(This would pop you underground pretty consistently before…)

haha you actually listen tomy recommedation about liting men up! WOO! is this on the demo or not yet?

We were planning on having the ability to lift characters for a while but you gave us the inspiration to jump right to it! This will be available in the next version, so not yet. Hopefully, we'll get this version out quicker than the last one. :)