We're getting closer, and here's what we've accomplished during these 3 weeks of development:

Over the past few months Jon has been working here and there on the revised horseback controls and finally they are at a point we can call sufficient for the 1st public demo.

Treasure chests throughout Terradim can now be locked and/or trapped!

Previously, Jon had setup a simple trap in the Playground scene for testing, but now he has come up with a better solution for randomizing traps/locks everywhere.

Also, doors can now be locked or unlocked by interacting with their locks.

Now in the Player-Select menu, when you select a profile/character, their equipment will appear as last saved.

Also in the setup scene, users can now only select a user profile that has not already been chosen by another player. An exiting player now resets their chosen profile to ‘guest.’ The user text display, unlike before, will now show this.

In the Grand Arena, players that are in one of the indoor sections have the sunlight culled from their view. This has caused a couple of issues for a while, but Jon has finally found the solution!

The solution – for each player camera, use OnPreCull to disable the sun, sun default state must be enabled, and use OnPostRender to turn it back on. The sun seems to cull and have reflected light correctly on each player’s camera.

Focusing on making areas into more believable environments and adding distant areas along the horizon, there are now mountain ranges off in the distance.

A new type of tree has sprouted in Terradim! 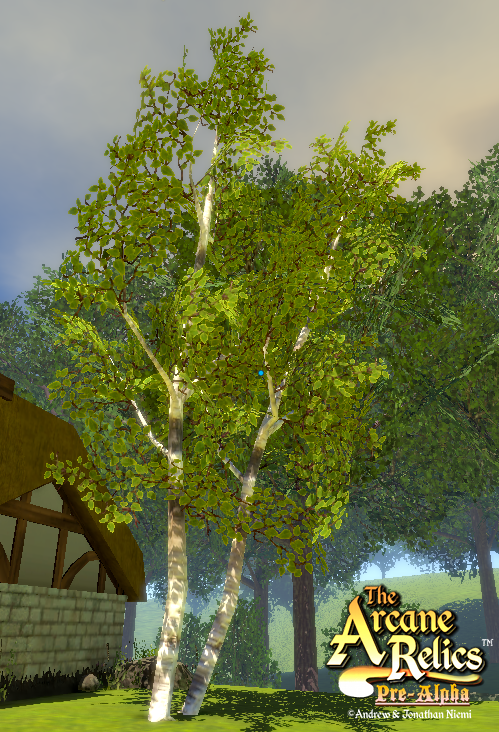 At the moment, it is not climbable like the maples or cone. We’ll have to improve our climbing system, adding support for curved/angular trunks, to allow this to happen.

There are a lot of calculations that occur when damage is inflicted, especially on another humanoid/thing that can get crippled limbs. For the past few weeks, Jon worked on improving the damage logging, which led to many damage bug fixes.

Jon found that arm damage multipliers were higher than they should’ve been (x0.9) and the bonus damage of hitting a crippled limb wasn’t working correctly.

Blocking per damage type is now working… So far. This allows damage types, such as fire, to still deliver higher percentages of damage compared to bludgeon and piercing while blocking.