Today, we will cover a bit more details about design concept and goals of this mod.

Shaping up the design concept


My first thoughts on modified graphics in SWAT 4 was about replacing majority (if not all) of game textures with higher resolution variants. However, when I started doing first preliminary tests to see how this would go, I found out that for this engine, this game and the 3D models used, a surprisingly large amount of textures actually had already "optimal" resolution and increasing it would not bring any significant benefits.

Let's take a regular poster as an example. You get to see a number of various posters throughout the game, so you know how they normally look like, right? So for the purposes of this game (due to the limitations listed above) an optimal texture file for such object would have a resolution of 256x512 pixels. However, increasing its size to a higher resolution of 512x1024 would not bring any significant benefit, because the game engine would still render this object with more or less the same quality no matter what distance you look at that object from. The only exception when you finally would be able to see a remarkable visual difference is just and only while standing very close to the object and even using a zoom-in feature as well! That's something players would not normally do in the game, simply because from a normal gameplay perspective, there is no purpose of zooming-in to objects you are already standing right in front of.

Below are screenshots from the SWAT 4 Editor that I captured back in the days of alpha testing. Please note, that these exact movie posters will not appear in the final version of the mod, because I obviously don't want to interfere with any copyrights. The first screenshot is showing you comparison of regular and hi-res textures at a very close distance, where you can already see some differences. The high-res texture looks pretty good there. However, taking into account the hi-res texture is 4 times larger (!) than the regular texture, the benefits from using it are not as significant as one would expect. Especially when you realize that this screenshot simulates only a situation of quite an extreme close-up. Moreover, when looking at the same posters from more usual distance, the differences are already marginal and the regular size textures (paradoxically) look even slightly better than the hi-res ones because it's a bit sharper from such distances (as the second screenshot shows)! 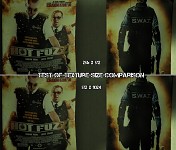 Alpha testing of the texture sizes and their comparison from different distances
.


So when it comes to optimization of game performance and time it would take to redraw all 2500+ in-game textures, the benefits of increasing size of every single texture 4 times do not pay off. This eventually led me to a conclusion, that not all textures needed to be replaced with higher resolution files, but only those with less-than-optimal resolution instead. Yes, the game was still using quite some textures with less-than-optimal resolution and that's where the opportunities of substantial improvement came in... I will show you more items with completely replaced textures in future news articles, the picture above displayed just a few examples of fully redesigned textures. You could clearly see the difference in object appearance when using higher resolution textures. That's because the original textures included in the game were at less-than-optimal resolution and so using new textures really makes a difference.

And what about those textures already using an optimal resolution? Well, there are multiple options of what to do with them, but as a timeframe for this mod was limited to a single winter season for me, I decided to keep those original textures in place and apply certain adjustments to enhance the their appearance. This means I made corrections to their sharpness, contrast, brightness, color balance, saturation etc. to make them look at least slightly more pleasant to look at in the game. And as different textures required different amount of alterations, you can imagine that some of those enhancement changes came out as more visible, some of them are only subtle in comparison with the originals.

Here are some examples of how the enhancement of original textures look like when applied to 3D objects in the game. Those textures always received corrections to their sharpness and contrast, while color balance and other adjustments were applied only where needed. 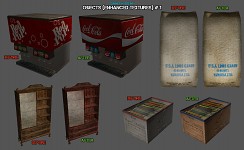 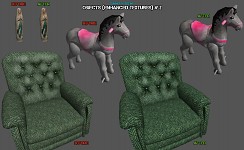 Enhancing the original textures of 3D objects in the game

Doors would be a good example of textures that did not require too much of color balance corrections and were enhanced mostly by sharpness and contrast adjustments. 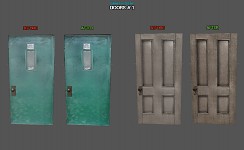 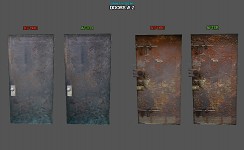 And last but not least, I did not forget on regular flat terrain textures either. They gained more of an in-depth look in this mod. 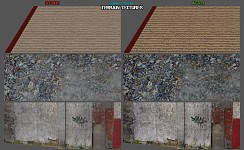 In the upcoming article, you will have a chance to take a look at a part of the game that has been completely redesigned from scratch with entirely new textures. I will focus on promotional and advertising posters that appear throughout practically all maps in the game...