Things are rolling at a normal pace. We've been working on new features and all sorts of fixes for issues in the current open beta build.

Things are rolling at a normal pace. We've been working on new features and all sorts of fixes for issues in the current open beta build. We're currently putting most of our focus on saber dueling. Now, I know what you're thinking, we're not lowering max BP or anything of that sort. We've focused on bringing back RC1-style sabering.

Some of you may now ask what is the difference between RC1 and RC3 sabering. It's is in the way lightsaber collisions are calculated. In RC3 the sabers collide when the models collide. It is basically as accurate as it gets. As a result the sabers never look like they stop the very moment when hitting the enemy saber. This is mainly due to latency.

RC1 did it differently. It had a boxy mechanic instead - Bboxes aka Bounding Boxes. So instead of narrow and thin sabers, we had box-like sabers. While the visual look has always been the same, that's what they looked like for the game code. You will be getting a more accurate depiction of when exactly you've been blocked and when not in RC4. 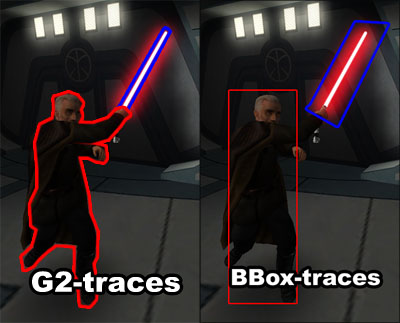 The next release will be considered the foundation for the saber system. With all the basic mechanics in place, we will try our best to make new ways to mix up the fighting to make it feel less bland. The active forumgoers may have spotted the Force Focus thread by Azuvector on the Feedback & Gameplay section. After the next release we will be trying this idea out to see how it works out.

As almost all of you may already know, making ideas for MB2 - or anything else for that matter - is completely different from getting them implemented and fully functional. So don't think we're 100% certain about these things ever seeing the light of day. Cloudcity and Saberlocks are prime examples of that.

I'll shed some light on of what we've been experimenting with lately. New grenades. Azuvector coded two new kinds of grenades some time ago. We've been playtesting with them lately. One of them works pretty fine, maybe a few tweaks with damages are necessary, but that's all. We're going to have to scrap the other one from Open mode though.

The Cryoban grenade was a cool idea. Everyone was excited about it, until a few test sessions had been played with it. Cryoban grenades basically freeze anyone who is caught up in the rather small blast radius. This was absolutely annoying. Think the annoying aspect of a knockdown times infinity. You just stand there completely helpless for a few seconds and the enemy blasts you away.

Technically it was easier to avoid than say a secondary grenade, but it was still horrible when people froze in place and nobody could do anything while the whole enemy team steamrolled your team down. It also felt very out of place and non-Starwars. We unanomously elected to get rid of them. They will be replaced with something beginning with a "S". I'm certain it will work out a lot better and feel a lot more funky and bring some needed variety for commanders alongside the other new grenade.

Soldiers are also going to get something new on the grenadefront. All you B18 vets can soon sigh in relief as suicide grenades are making a comeback! They will be slightly less potent and behave differently from the B18 ones, but rest assured, there will be boom.

They're not the exact same nades you remember from before. These behave differently. You can "cook" them. They'll blow up in your hand if you cook them too long. If you cook them for a while and then throw, you could say.. Blow up mandalorians out of the skies with them if you time them appropriately.

This was the first of many future reports of the ongoings in the development of MB2. I will be trying my best to provide you some insight into stuff that is happening behind the curtains of this game as time progresses.

Why is that? I think its completely clear.

Anyway, I'm soo glad your turning back to RC1 style sabering :D I was an average saberist in RC1, but since the next updates I kinda suck...