Shock Therapy has some trouble, but that doesn't prevent it's development.

Before I start:
TheWorms has some trouble getting all the files back in order, which prohibits him from modding.
This mod is far from dead.

We need YOUR help, Commander: 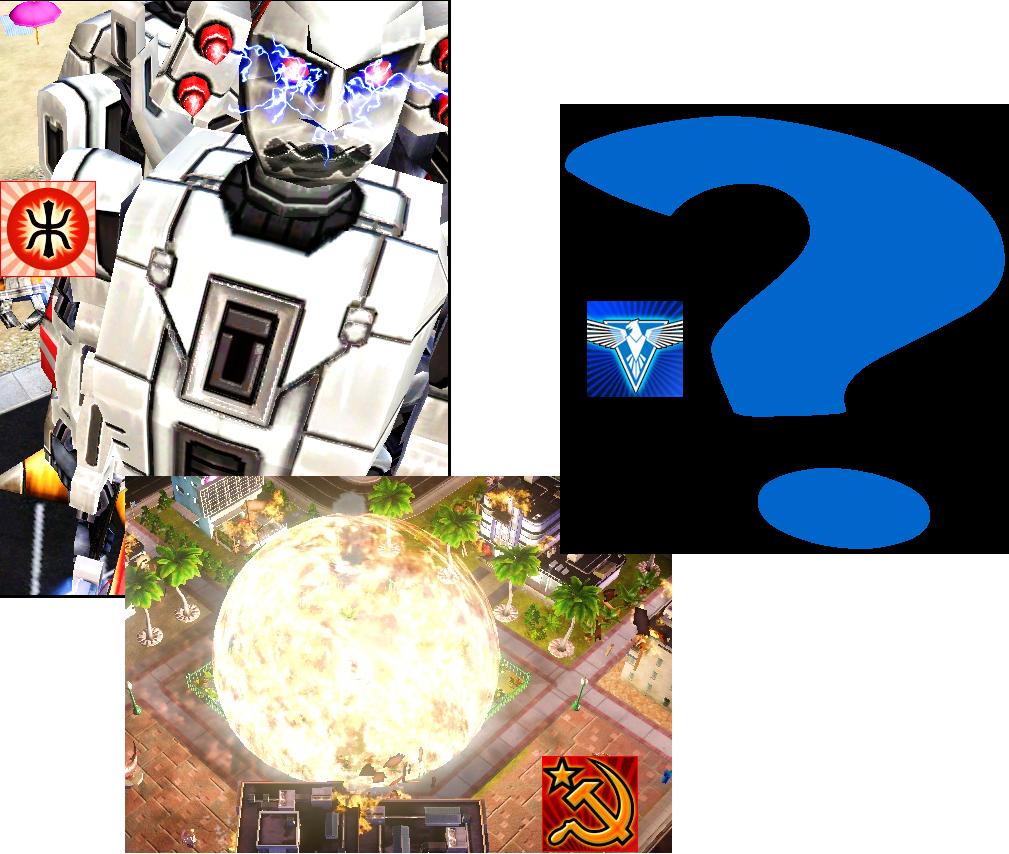 Both the Soviets and the Empire have a Super Ability (Tsar Missile and Shogun Executioner resp.).
The Allies have no such weapon yet. The community (yes, that means YOU!) can offer idea's for the allied WMD power.
But;

No Weather Control Devices.
-Yes, possible, done by Slye_Fox. But please keep the storyline stuff. No Einstein, no awesome weapons of science.
No Chrono Rift clones.
-The Sigma Harmonizer was a good choice though.
-But I think it's still the chrono rift, only still in the world and destroyable while the enemy are immobile.
No Cryoblast clones.
-Especially wide area freeze bombs that can insta-freeze the whole base, which would be OP.

New Footage:
The Greater King Oni has been spotted by Allied scouts, and they've seen the full test of this beast. Watch this footage, and learn from it!


Note that this unit is still undergoing tweaking!

Media:
Some of the nicer media previously uploaded. 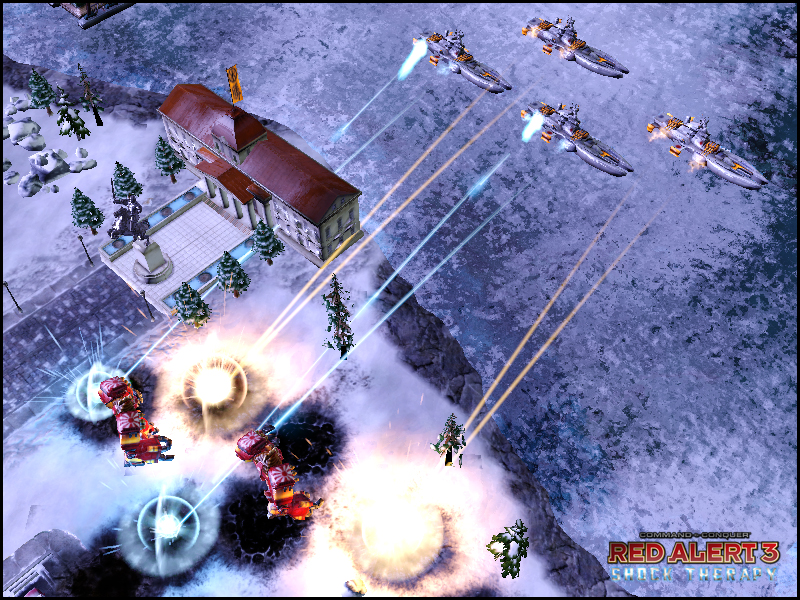 The new particle effects for the Shogun Battleship. 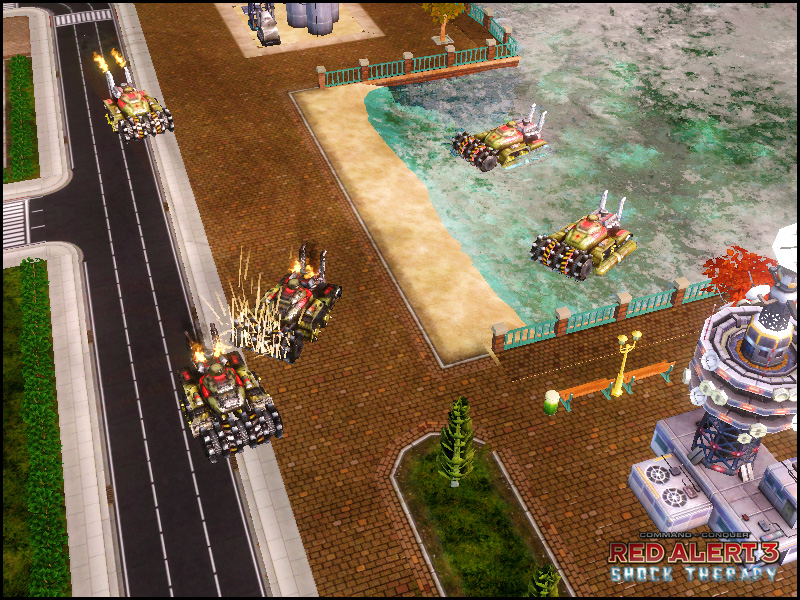 A nearby update (possible the next) will see the introduction of the Grinder Tank. 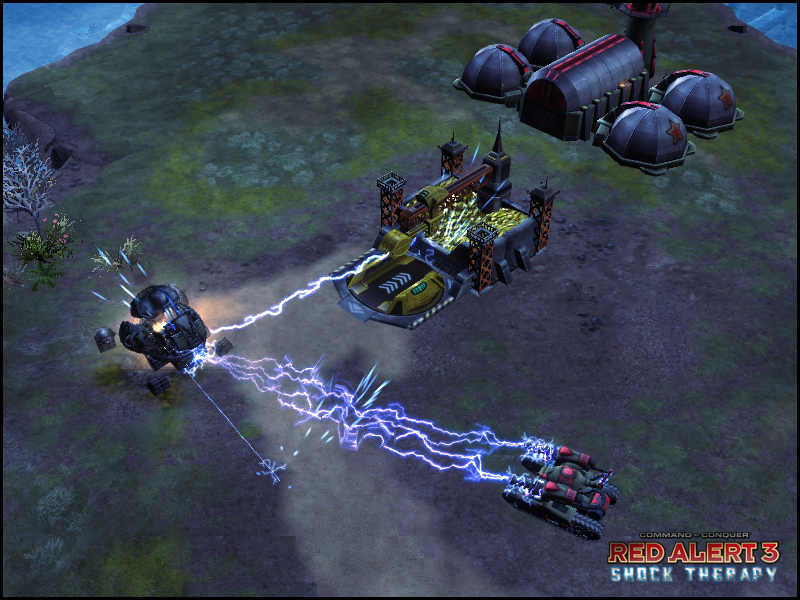 The shocking new fire effect for the Tesla Tank. The electricity will jump from one target to another, causing some damage.

Conclusion:
The mod is not dead yet. Helping us by submitting idea's will make sure that this mod won't die. Stay tuned for the next updates!

At least this mod isn't dead yet. =P

Hrm... at least your helping the Worms Com-Link. :)

Here's an idea about a Fuel Air Bomb? Wait.. that is somewhat over done I think. lol

sweet i got no ideas though ...

Eagles are fast, so they somehow manage to dodge most of the anti-air defenses, something like 10% chance to hit them.

That's just an upgraded version of the Precision Strike power.
But thanks for opting!

*Goes back to polishing the Tesla Tanks.*

i've got an idea called neutron bom.
This is a combination of two of my previous ideas.
basically a modified habinger ( bigger and A LOT more armour ( ie 10x more armour, or even invunerable since no other super power is stoppable)) flies in a straight line to the target, shelling and machine gunning any enemies in sight, the same way as final squardron.

Then, when over the target,it drops a parachute slowed bomb,( so the harbinger can get out of the way) which badly damages buildings ( slightly less than the tsar), does next to nothing to vehicles,and instantly kills infantry and aircraft (since the pilots die and then they crash). However, this bomb also clears garrisons instantly and also kills pilots in tanks, making it neutral so it can be captured by your infantry, the same way as natasha's special ability.

then the habinger flies off the screen after shelling more enemies

sorry,forgot to say:
also the neutron bomb explosion should be a bright white flash like in generals zero hour, maybe you could use a bright white and bigger version of the shogun executioner explosion.

Unfortunately: No Einstein, no nuclear technology. And that includes neutrons... But we'll see.

actually the allies used something called neutron scramblers in uprising for their x-1s and they use proton tech... and if you take the protons form an atom... you get neutrons, so let's just say it's an dumping of waste neutrons from proton weapons.

or you can just say that the allies stole the soviet's tsar bomb blueprints via spies and modified it so they could neutralise huge soviet tank divisions without causing too much collateral damage to the tanks.

in fact that is the reason the neutron bomb was invented in the real world... to neutralse soviet tanks in the cold war.

Hope that may be useful!

oooh i know a solar flare super weapon how that works idk=] or a comet drop but that will be too sovietish how about a tide wave?

"Emergency mining system" - $5000 w/db
This power calls a team of allied engineers in a large underground vhecicle to mine half the ore of any ore mine of the player's choosing. This can be devastating in some cases, for example if someone were to turtle. But you must be careful with this power, as if u were to target a ore mine with $10000 or less, it would be pointless. Target a unclaimed ore mine for the biggest gain.

This power would use the spys's bribe icon for its icon, and when used dirt/dust effects will be around the ore mine that was targeted with mayby a shake of the camera.

What do guys think? ;) If its not possible to code then dont bother, but i think it balances out the 3 superpowers. EOTRS=Unit, soviets=bomb, allies=economic strike. :)

a unit called tom bombadillo is summoned to the battle field and you can use him to wreak havok for a limited amount of time. he should have high defence and HP and be able to use a special power that blasts all infantry he is pointing at to be blasted backwards.

this idea came to me in a dream :o

i think the allies need more units ...
BERRYBOMBER I LIKE YOURE IDEA

sommething else i think a chronosphere place on the field some veteran chrono legionaire from ra2????

and called legionaire call and cost 8000

well, posted before in the forums but nvm;
Ok,here's my ideas

-Chrono Gate
Like a wormhole,any unit passing through it is teleported to a chosen place: costs 5000 and 3 min cooldown
-Harbinger Catalyst Strike
A Harbinger equipped with a Catalyst Bomb which creates a chain-reaction (much like mothership) and effects nearby targets.Slighly weaker than a Superweapon Strike but this bomb can damage the entire map if enemy buildings are mid-close into eachother. Costs 5000 and cooldown is the same as Tsar Bomb,Harbinger is visible but cant be destroyed during the strike
-Chrono Reinforcements
5 Chrono Tanks are spawned in an area. Costs 7500 and has 4 min cooldown.The player is warned if their opponent uses this power

glad you guys arent dead. heres my idea. since the ailled have a orbital defense network why not add a lazer from space come down and own the base just like the P.C. from Generals. you can control it and move it to any building near the area where the beam started. but the beam only can move in a large circlear area just like the spectere gunship in Generals.

there is only one person making the mod :P others are just supporting him

what about a super unit instead of a super power?
something like the mammoth mk2 from tiberium wars

The problem is: Who's gonna make the concept/model?

Well, since that xonone mention about the Orbital defence network, i suggest the ion cannon like the one GDI use in C&C Tiberium War.

A special power that shrinks everything including aircraft,infantry and structures in a mid-sized radius. (Slightly smaller than Vacuum Imploder radius)The S.H.R.I.N.K bomb is dropped by a Harbinger which is indestructable.Cooldown is 5 mins and costs 4000,shrink lasts for 30 seconds.

spectrum rays falling out of the air?

EMP Bomb
This bomb is dropped by Harbringer, which will turns off any mechanical units nearby. This bomb is deadly to air units, any air units nearby will be crashed to the Ground. Cooldown 7 mins and costs 5000, Power off lasts for 50 seconds