The Soul Saga Kickstarter is almost ready to launch! 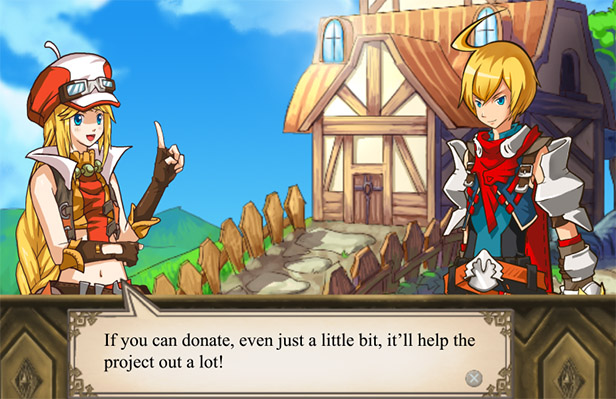 This week and a half has seen some HUGE steps toward the Soul Saga Kickstarter launch. In fact, the presentation is almost done! I was able to get the voice actors for Elise and Mithos recorded, the graphic design done, and am now putting the finishing touches on the second half of the video.

The graphic design was done by my friend Zahra Haghiri. I'm very grateful she stuck with me even though I'm probably the pickiest boss in the world. We sat by each other for about 5 days while rapidly prototyping ideas and eventually coming up with some pretty nifty designs.

The voice actors behind Elise and Mithos are AAA quality. It was a pleasure to work with them, and an honor to have them voicing two of the most important characters in Soul Saga. I'm VERY happy with how it turned out!

The second half of the Kickstarter video is pretty much done. There are some polishing touches I'd really like to add to it, but I'm near the end of my time and budget for the Kickstarter. I will spend the rest of the week mulling it over and see what can be done reasonably for it. If nothing big pops up then the Kickstarter should be launching this weekend.

I am totally going to help the Kickstarter when its live!
I'm one of those guys who wants a DRM free digital copy, so I am willing to spend $15 for it.

Thanks booman! I am going to be pricing the DRM digital copy at the standard $15 mark, so that's good news. I am actually going to delay the kickstarter by at least 1 week though, since I just got word back from a composer who might be able to jump in and do a little work before I launch. I still need to nail down some details though.

Delay it as long as you need... Its better to have some awesome in-game footage and screenshots before starting a funding campaign.

It's nice to see how much progress you are making in such a short period of time, I can't wait to buy it :D

Thanks Dexter! I am going to delay the Kickstarter, and I'm not sure exactly until when. It would be between 1-3 weeks at this point depending on some details with a new composer I have to nail down. I'll post something later tonight with news on that.