Shockwave development has once again switched back to top gear and we'e getting ever so close to the launch of version 0.96. Come and see what our dev teams have been cooking up for you!

It's full steam ahead now as we edge closer to the release of the new version. To ease the time between waiting, today we are take the wraps off of one of the new units and and an upgrade that we are sure you're going to have a blast - or dare I say many blasts? - with.

Time to put on your lead underwear. Fresh off the production line and first up is the new Tactical Nuclear Missile upgrade for General Tao's Overlord. 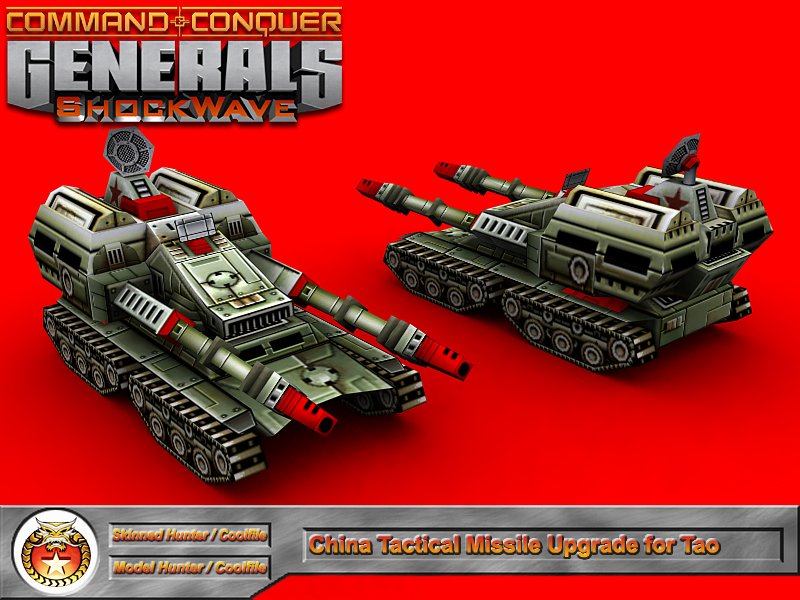 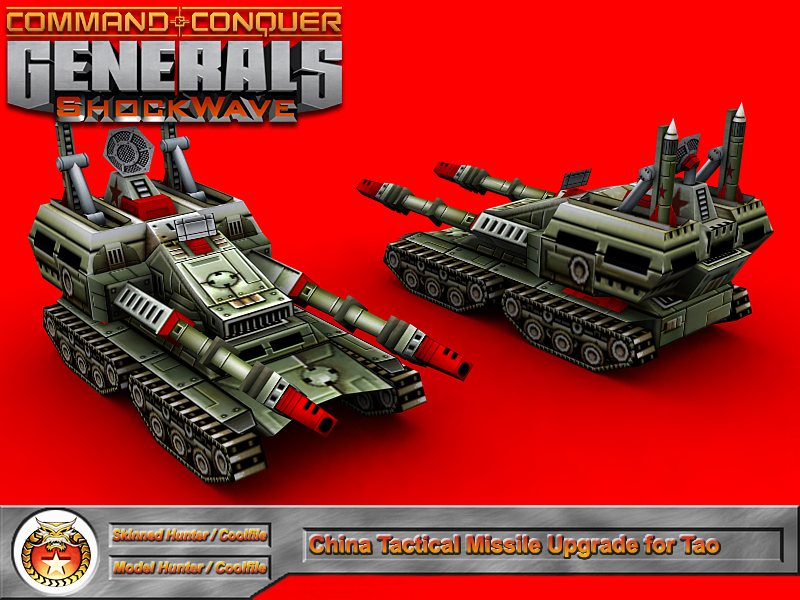 This upgrade was developed in response to a case our Balance Team put forward regarding the lack of customisation for Tao's Overlord. The Tactical Nuclear Missile upgrade will equip the Nuclear Overlord with a sensor array and two large missile hatches on its back. This new M.A.D. weapon will allow the Overlord to spread deadly levels of radiation across considerable distances, while the array will assist the Overlord in the detection of hidden enemies.

Next up is the GLA Demo General's long-awaited Toxin Tractor replacement. 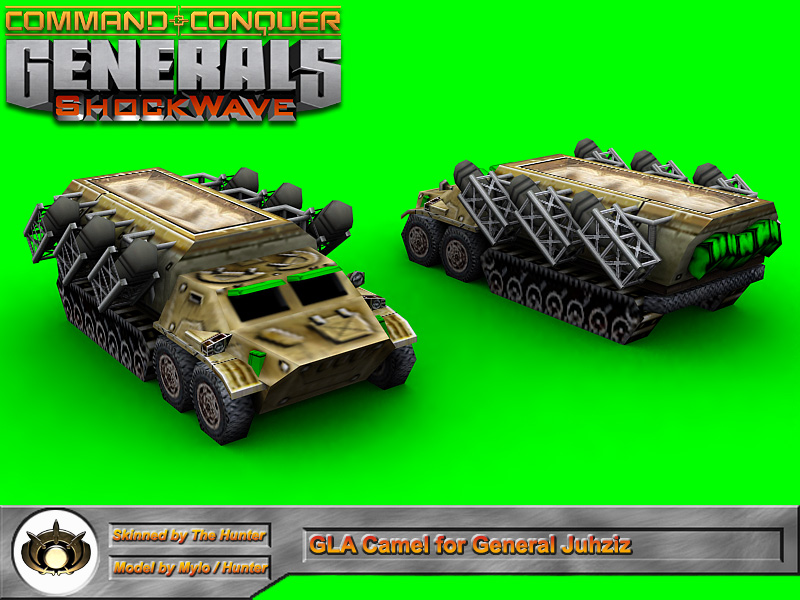 The paradoxically named Camel shrapnel launcher is not as innocuous as its name suggests, and is not one to be mocked or trifled with. Like its predecessor the Camel will have a specialised role in the General's arsenal. Field tests show the unit to be competent at dispatching infantry out in the open and in garrisons with relatively no resistance.

As always we are as excited about the prospect of getting all of the new content into your hands as you are and remain committed to delivering a quality product. With that said, that just about wraps up this update. We hope you enjoyed it.

Till next time, General.

The camel is based on an SDKFZ 251 "Hanomag" German wWII half track, yes some were actually decked out with rockets launched from crates. :P

Actually, it's loosely based on that; the chassis is fairly different from the Hanomag. Pretty much the only thing that is identical is the big missiles.

is that where you got the idea for this?

Looks like it to me. A nice addition to GLA's arsenal!

OUTSTANDING!
I whant to play XD

im the most biggest fan,im OP i can just kill you with my giant lack of patience xP
anyway,cant wait for 1.0 which is gonna have teh pwn ships :D

1.0 is fairly distant at the moment, but I can tell you this: Navy is a big 'if' at this point; we will add them if we find a good, bug-free way to do so, but so far, we haven't.

I think you guys might be able to find a way way down the road, but then again that might involve a lot of work, I mean a lot, a ton if you'd like, maybe so much you would go insane and forget why you even did it. But that, like their current state, is a big 'if'. Unless, of course, it's already happened.

hi erhm shockwave doesnbt work for me ...
i can play gernerals zerohour normal ut when trying shockwave its says
it has encouterd a serious error

If you do that correctly, it's pretty much guaranteed to work (unless you have graphics card issues or some weird OS prob).

i already tried the reinstal thing still didnt work and if it was a grahpic card problem shouldnt i not be able to play zero hour normal ?

hey
i got it working i forgot to patch generals

After you install zero hour, you have to go online and get an update before you install shockwave .95, and then the .951 patch

Nergi,the Serious Error thingy is nothing new,im experiencing this for 4 years with ZH.It just happens when you play a lot i guess... Don't tell me i should install again,i re-installed the game atleast 5 times.Not particular with you awesome mod tho :D
Btw,if you get the error just when mod is starting,i have no idea what it is but i also experienced that once with Shockwave 0.951
but then it only happened when i played the game for hours

Ja, I know what you're talking about. That serious error occurs every now and then when you win as well. Dunno know why or how to fix it though, as I'm not experienced in coding.

well i got it working now and i must say AWESOME !!!!! HOLY **** this is how the game shouold be in the first place :P

Hahaha I know, a bit more then a month ago I went to my brother, installed Shockwave on his rigs... This week I visited him and asked whether he had played vanilla Zero Hour since, his reaction: "Huh, what? You kiddin' me?" :P

Well I'm glad you guys like the mod. It's your kind of robust support that keeps us going. Also, remember, 0.96's release's is fast approaching.

Though I will warn you, 0.96's additions are small in the 'content' factor; there's not that many new units and stuff. The things that we concentrated on during 0.96's development were AI and balance, which have both received gargantuan improvements. (This is also because we were busy dev-ing 'content' for RotR).

Hopefully you guys will understand when 0.96 comes around.

Your computer probably got to hot; its happened to me before to, after it starts to slow down.

Just a question, I noticed that in cnc generals vanilla, a unit can drive over a lamp post and knock it over, but in ZH a unit just passes right thought it, except on campaign missions. Is it something to do with the map? or can I change this?

Im asking because if I remember correctly, you managed to fix it in shockwave.

Can I also make every kind of tree burnable?

I'm not a coder, I'm just a Beta-tester with a few additional responsibilities. I'll direct you to the Generals Modding forum on our forum, here:
Forums.swr-productions.com

I think there will be people there that can help you.

To answer your other question, well, every tree I've encountered burns in SW and RotR, so I have no reason to believe that it's not possible.

I joined and tried to post on a forum there yesterday at SWR productions and it said that I wasn't allowed to use the forums...

That's probably because you have yet to activate your account; an E-mail will be sent to the address you provided, there will be a link in there that activates your account.

when does this update come out ?

We have a strict policy of not giving out release dates. The best answers I can give you are 'it'll be done when it's done' and 'soon.

Yes, but Rise of the Reds is much more alive than Shockwave is.

I think all generals in 0.96 should have their own unique superweapon.

Well, here's our plan: the only generals that will get unique super weapons variants in future versions are Thrax and Tao. They will not get completely new super weapons, only improved versions of the normal superweapons (like the ones that Demo, Laser and Alexander already have). Alexander on the other hand may be getting a new super weapon or an upgrade to her superweapon.

Out of all the factions, all the vanilla factions, as well as Tank, Air, and Stealth generals will be getting the normal superweapons. In version 0.96, there will be nothing new in terms of superweapons beyond minor tweaks.

some changes is unbalanced and crazy, i dont like Leang "earthquake" tank, maybe too many new things is not good idea, but mod is the best, speeed up :)

Uuuuuh... Really looking forward to this, I mean so far the mod's been like a totally new and better game. So keep up the good work and big thanks from Denmark!

Any updates coming soon or is it dead ?

July?!? Is this project dead now?

one thing is it gonna be a campaign to shockwave ??

When you guys are going to release this? Eny update?