Talking about new and palette swapped enemies, area and level tuning, and a bunch more!

Sorry this update has been a long time coming -- October turned out to be unusually busy and I had a number of large game-related issues I wanted to tackle before delivering you all an update. But rest assured, challenges hath been slain and there's a ton of new work to talk about!

Here's what's been going on since the last update: 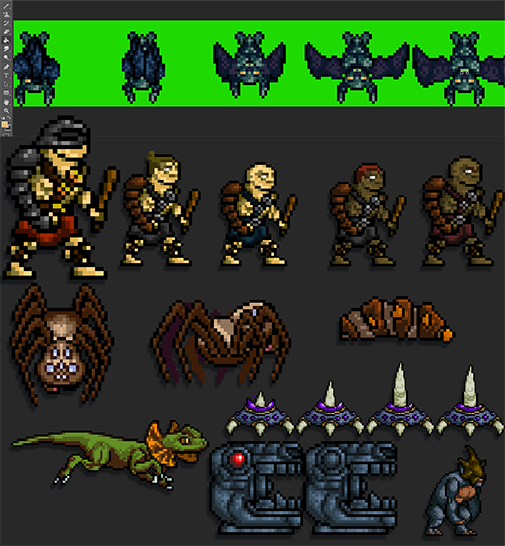 I've been diving into my already-finished bag of tricks to produce some newer baddies, especially for the starter areas that many people are having trouble with.

For example, the bats (which a LOT of people have been getting slaughtered by) have been nerfed and are more manageable now, as far as their speed and aggressiveness. I've done a palette swap of them to create a newer, deadlier bat monster. This little process has been done on a series of baddies to help balance out the overall experience a bit more, especially in an attempt to teach the player early on what is expected of them, mechanically.

Here are some other screencaps and examples of newer critters I've crafted:

Some of the areas go on for WAY too long (in my opinion) and feel like filler. I've been cutting down on area maps and tossing rooms that feel excessive. 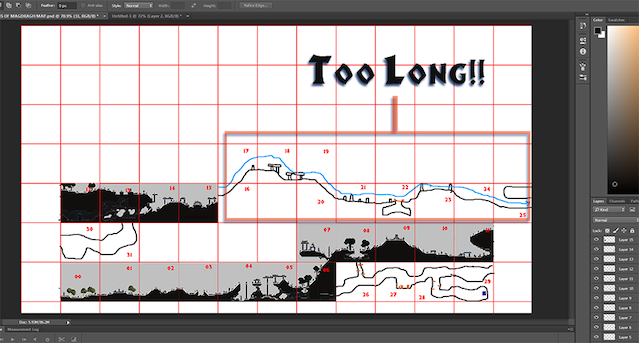 I've also been going through the finished areas and FINALLY adding physically visible and interactive save/checkpoints:

There are certain areas, too, that I felt lacked a solid visual identity (mainly, background images and graphics)-- especially unique locations. I'm fixing that:

All of these aspects are finally making certain areas feel "complete" and polished.

Across all of the finalized content I'm addressing and tuning several things:

Those have been my main priorities. Now, here's a BIG one:

Anyone who has played the live development build would notice a lack of effective area surrounding your weapon strikes, especially when you are flush up against something you're trying to hit, or trying to hit one of those pesky, smaller and agile bats.

Here's an example of this problem: 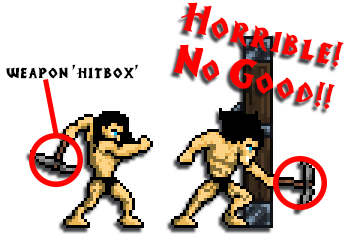 Each weapon has it's own unique hitbox, usually using a type of 'precise' collision detection. Obviously, this can be a problem when you have a situation like the one pictured above; the player is standing RIGHT NEXT to a door, they strike it, trying to open it, but their weapon's hitbox winds up OUTSIDE the door's hitbox, therefore resulting in NO collision.

I've taken steps to fix this by reworking the combat system to accommodate an additional invisible, inverted hitbox that bridges the gap between the player's bounding box and their weapon (in other words, a hitbox that is an arm's length). 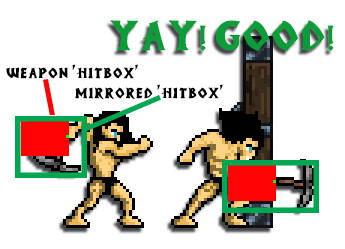 This took a lot of doing and re-engineering of the current system, but is WAY worth it. Combat feels more responsive since you have better coverage, and attempting to strike things like levers, switches and doors will now no longer (mostly) result in a complete whiff.

Unintentionally, this also introduces an interesting 'direct hit' kind of system; if you are not striking an enemy with the actual bounding box of your weapon, BUT your mirrored arm-length hitbox collides with an enemy, it won't do quite as much damage is slicing an enemy directly with your rad sword would. Accidental, but interesting and offers a bit more depth to the combat!

I've added a TON of new dialogue and NPC interaction including but not limited to:

In addition, I've gone back to previous dialogue and edited it for either length, or to bring it all up to speed with current character arcs and goings on.

I've been pouring over all of your feedback (thank you!) and issue reporting, and I'm busy at work cracking all these little suckers, and addressing a few issues.

I'm also working on RE-working the save system -- at present, it isn't perfectly future-proofed, and some technical issues need to be ironed out, but this probably won't be 'perfect' until closer to launch.

Anyway -- thanks for reading another update! There will be a big juicy patch coming to the live development build soon including all of these changes, content, and more!

Thanks again for all your support and patience, and have a great Thanksgiving!

Glad to see a new update!!! The game is really coming together from the gif images I'm looking at... Keep up the great job @toborprime!!!