Lot of things happened during those last months! New coders, mapping progress, here is the summary of the latest months.

Lot of things happened during those last months! New coders, mapping progress, here is the summary of the latest months. Since our latest news about help wanted, we got lot of people who proposed to help us with programming. Unfortunately, most of them never developed under the Source Engine, so they weren’t able to help us without having to train on the engine.

But we got at least two programmers who know the Source Engine! First, Klusark , who’s already coder in Stargate Legacy , joined us and started to include the weapon system in the game. Item boxes, bananas and shells are already going to be implemented, and more items will follow next.

Spike is the other coder; he’s also a great mapper! He made some nice maps, like pl_jungle for TF2. You can see some work on this topic on our forums . But he’s making some excellent work on coding too. The kart is now correctly playable, but it’s not finished: it’s just possible to drive around; next step is the jump and slide feature, with the mini-boost system.

Here is a video of how is looking the kart now; keep in minds that everything is still in progress and modifications can be made later, especially after multiplayer tests


Finally, some news about one of the most popular battle maps: Block Fort! Here is a couple of screenshots showing the new layout of the beach around the main area. The map will have 4 different towers on each corner. You can see one tower on the screens; the 3 other aren’t finished yet. 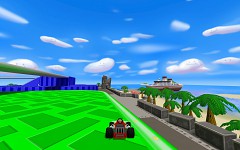 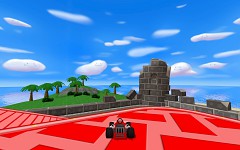 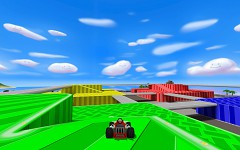 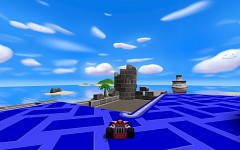 Also, we’ll make news each month, even if nothing happened. But we’re trying to do the best possible to get a playable beta as soon as possible. The first public beta might include a few maps, characters and items, and additional content will be added progressively.

Good to know this is still being worked with.

omg after all the wait YAY AN UPDATE!!! I KNEW THIS DEV TEAM WILL NEVA GIVE UP!! NICE UPDATE!

They're never gonna give you up!

Never gonna let you down either.

Yeah ! first in game video !
Champagne for everyone !(or Calvados)

If you youtube Mario Kart Source, they have some game play vids which look great.

Freakin' unbelievable! Too much awesome things in one news post...

This video makes me wonder why Mario has never ventured into skateboarding. I was strongly reminded of Tony Hawk's by this video.

Oh my gawd! It's just so awesome to know that you guys are still alive, I was almost stopping to track you, but now you just come with a video... Come on, tell me that you are now gonna make the characters...
MAKE YOSHI NAO!

This looks awesome, can't believe I missed it, can't wait for release so I can review it (then play it to death)!
Modsentry.com

That driving video reminds me of Trackmania Nations

How did i not know about this? Looks great, seriously.

Will there be a time trial mode?

The video was...amazing. Another mod I can't wait for!

I like the update. It looks nice at its current stage. Really hope this mod works out.

Very nice and some really amazing work.
Your Mod is going to rock sooo badly.
I can't wait.
I actually can but ... well.
I'd rather not xD

Characters are already done as 3d models. We will have to implement them now. But first we finish the kart, we're adding jump / slide features.

Been waiting for this mod for so many years now lol. Looks awesome as usual but hurry up :D.

And out of the blue, news on a game I thought was dead!

why not use an original IP?

Include this map as a bonus in the game release. Maybe for Developer comentary. :P

And could this mod finally be nearing a release?

this is shaping up very nicely! that video of the test track looks brilliant. some minor issues still, but other than that, its looking very hot indeed. Can't wait to play this baby :D