It’s been a couple of months since our last update, so we figured we’d show you some of the stuff we’ve been working on since our decision to convert over and become a Day of Infamy total conversion mod!

It’s been a couple of months since our last update, so we figured we’d show you some of the stuff we’ve been working on since our decision to convert over and become a Day of Infamy total conversion mod!

In the past few months we’ve gained two new team members! One of them is an old-timer on the team, Semmel, who worked with us a few years ago. He will go back to his position as a mapper and environmental artist and produce some quality stuff for us in the future. He has already done some work for us which we’ll be showing off later, and you can expect great stuff from him in the following weeks and months.

The other person is more of a newcomer. He goes by the name Ribs in the DoI modding community, and he will be helping us a lot in the sound-department. He impressed us with his application-reel where he made sounds for some of the weapons we’re putting into our mod, and we’re confident he will be a great addition to the team!

The first thing we’re going to show off in this little news update — a new map which will spice things up a bit compared to the infamous trench-warfare on the Western Front represented in our other maps.

The new map, Neuve Chapelle, is based off the battle that raged around the village with the same name in March 1915. In real life, the battle was a relatively short affair compared to other famous battles fought during the same war. It lasted for only three days, but became a brief and bitter taste of the struggles that would occur later during the war. The three days of fighting resulted in a total of 20 000 casualties. The British Brigadier-General John Charteris is quoted as saying; “England will have to accustom herself to far greater losses than those of Neuve Chapelle before we finally crush the German army." 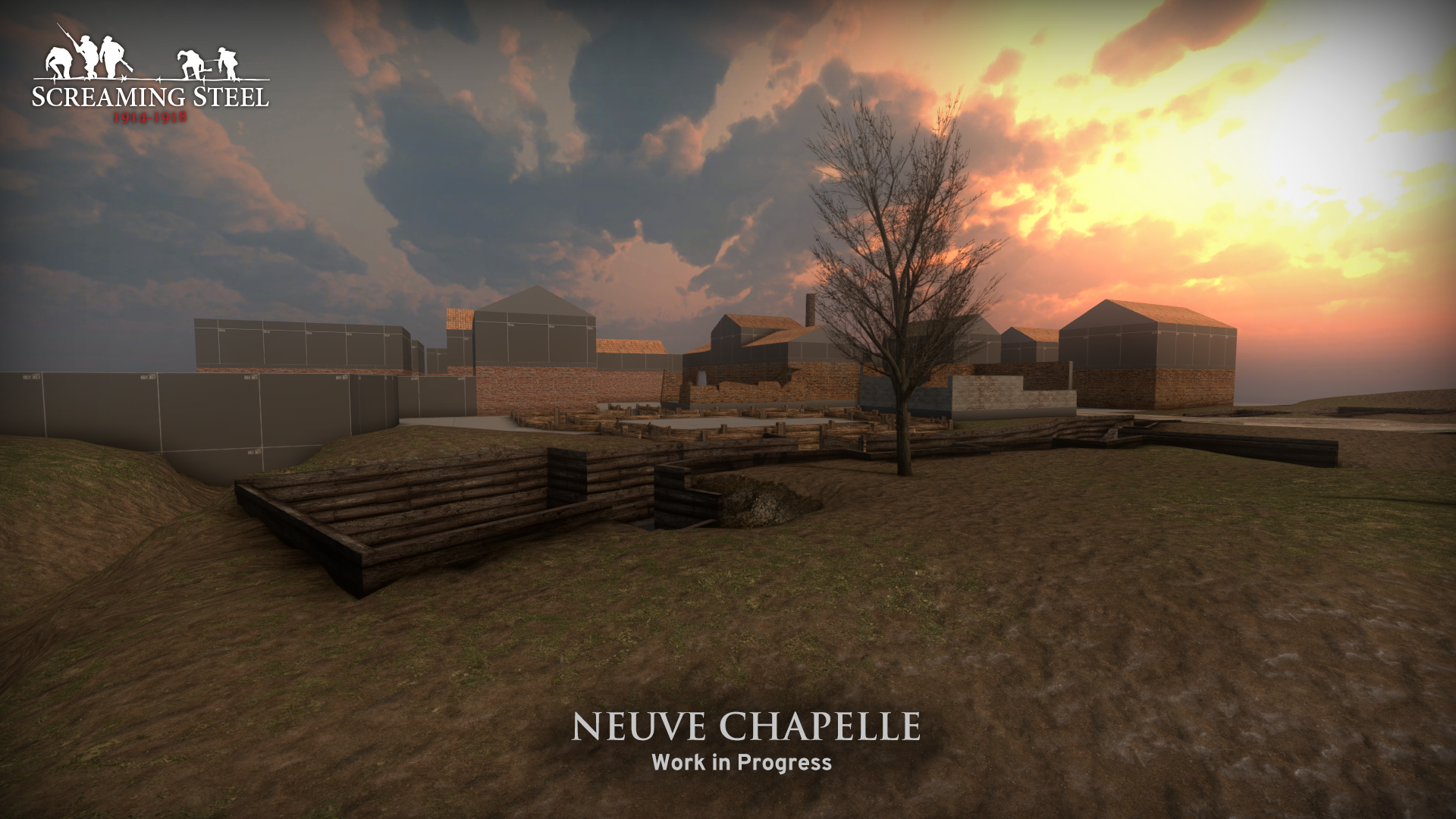 In Screaming Steel, Neuve Chapelle is a map built around the “Offensive” gamemode from Day of Infamy. The British will have to push their way through three capture points before finally destroying a German radio. The job of the Germans is to stop the British advance. The first obstacle that the British will face is a series of trench networks right outside the village. Clever use of smoke, artillery and grenades will be necessary to flush out the Germans. Their second objective is located inside the partially ruined village; the Neuve Chapelle brewery. The giant smokestack of the brewery can be seen from all over the map, and will act as a landmark for the advancing British. Their final objective to capture is a bridge over the Layes river, with the second line of German trenches covering the bridge and its approach. The last and final chance for the Germans to fight and win will happen amidst the trenches and a lone pillbox in which the radio objective sits. 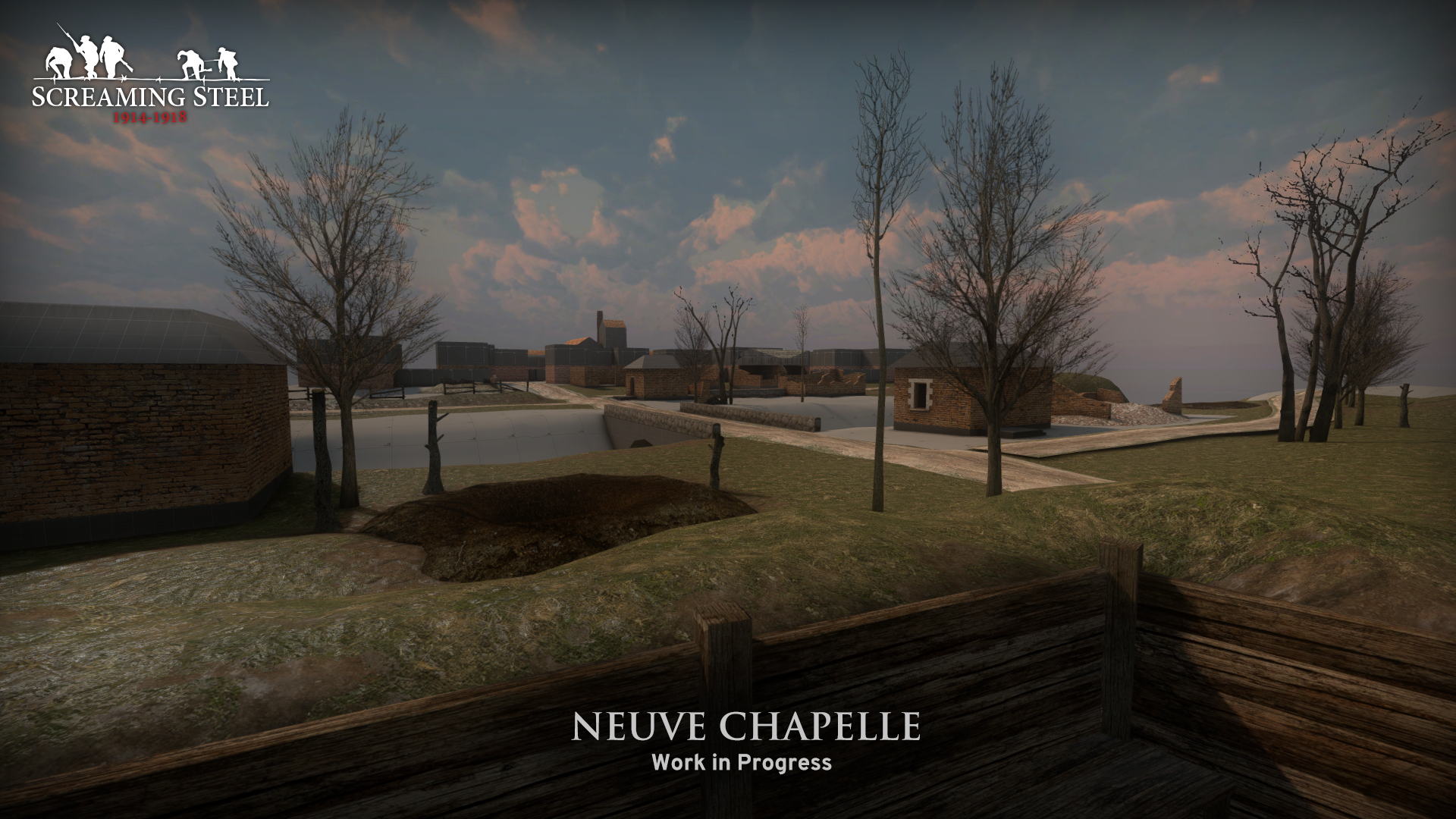 Next up is a type of weapon we'll include with Screaming Steel, which was never a part of the older WW1: Source. This weapon is the rifle grenade, available for the rifleman class for both armies. They cost a hefty amount of supply points but are very useful for knocking out pesky machine gunners and scharfschütze who have dug in well. Both armies will get rifle grenades that match the ones used in real life. The British will receive the Hales Grenade, and the Germans have the Karabingranate. These are both “rodded” rifle grenades, which means that they’re grenades with a long rod attached to them which is inserted into the barrel of the rifle. The gasses from a blank round will propel the grenades a fair distance before they land and explode on impact. 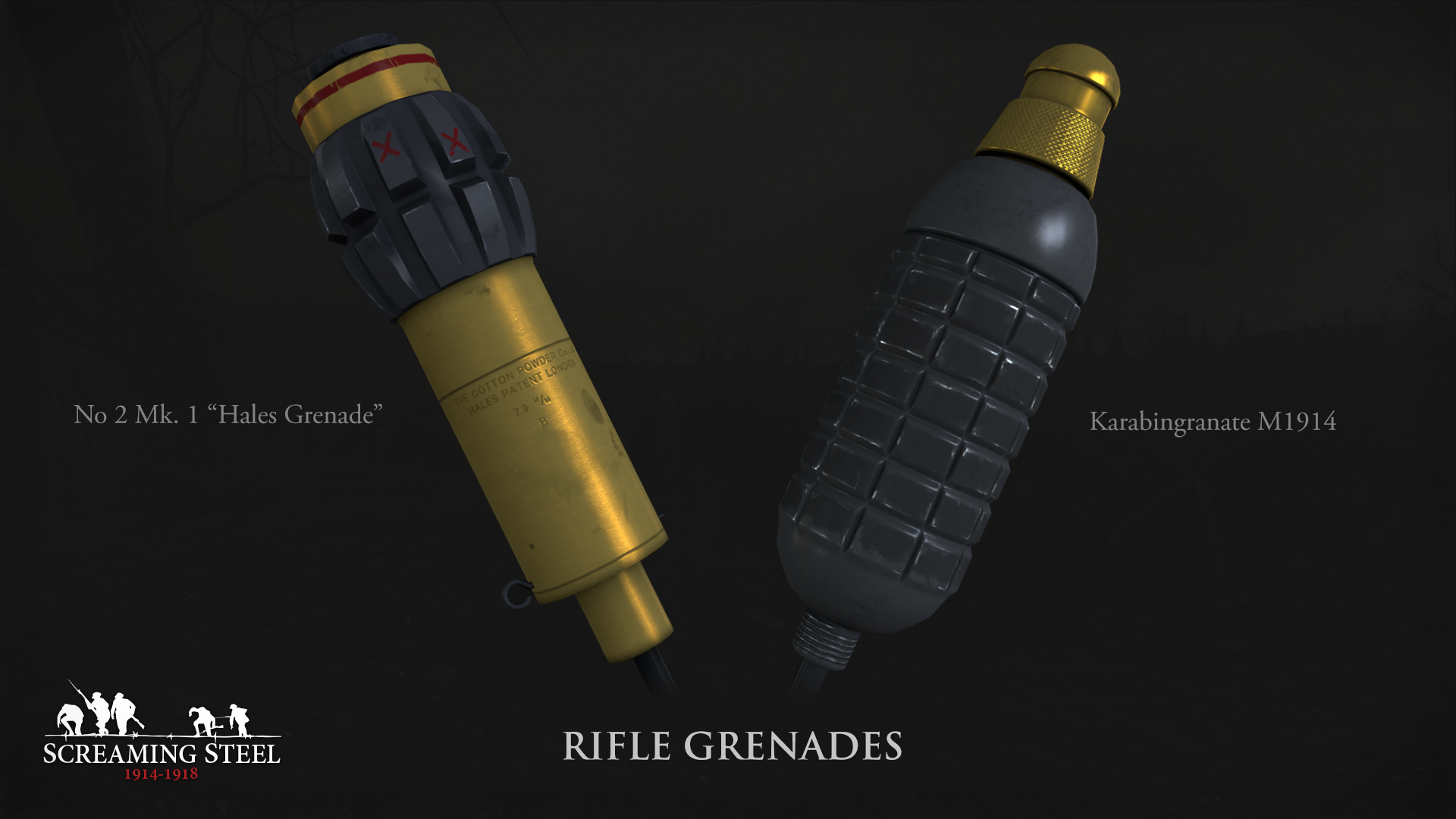 The next thing we’re showing off doesn’t pack quite the punch as a rifle grenade, but it can affect the outcome of the match drastically in Screaming Steel. The portable field telephone is necessary for the Officer to call in artillery, gas and smoke barrages to support his team. The field telephone is carried by the Signaller class, and these two classes will need to stick together in order to ensure victory. The field telephone works in the same way as a radio from vanilla Day of Infamy, but since wireless radios were non-existent with frontline troops during the First World War we decided to make this asset as a replacer. History is important to us, and it’s a focus for us to present the real war in the most authentic way we can while still preserving pristine gameplay! 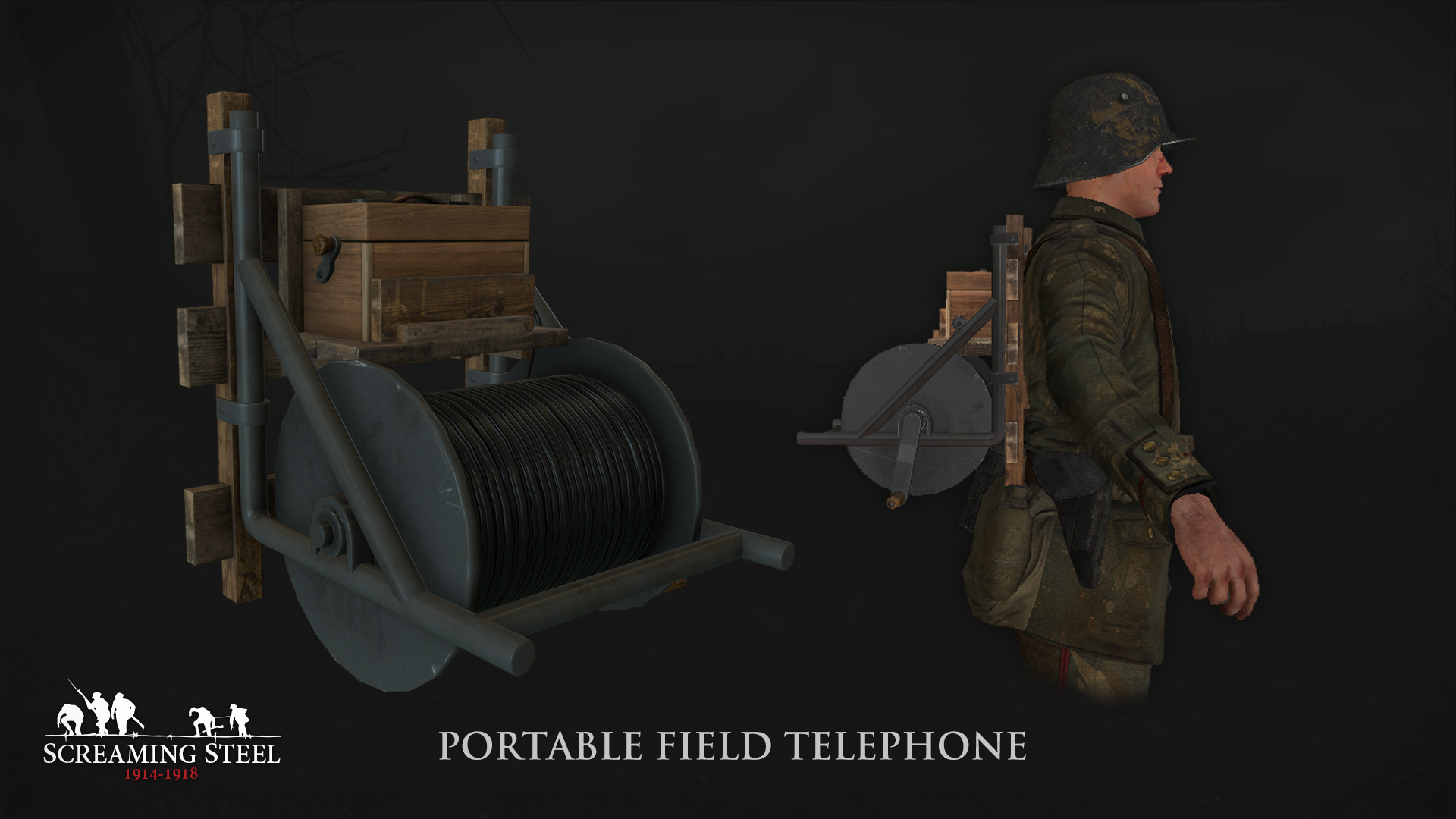 Next up is not a feature or something specific, but we still feel it is worth showing off. What you see in this picture is a small collection of custom environment assets created by Volcol and Semmel. They will help spice up all of our maps, and will make our trenches seem more realistic and lively than they were in older versions of our project for sure. Trench walls, duckboards, unique sandbag variations and ladders are some of the things we’ll be making use of, and these will also be available for anyone wanting to make custom maps for Screaming Steel. Community maps were a big part of WW1: Source, and we want to carry that tradition forward into Screaming Steel as well. 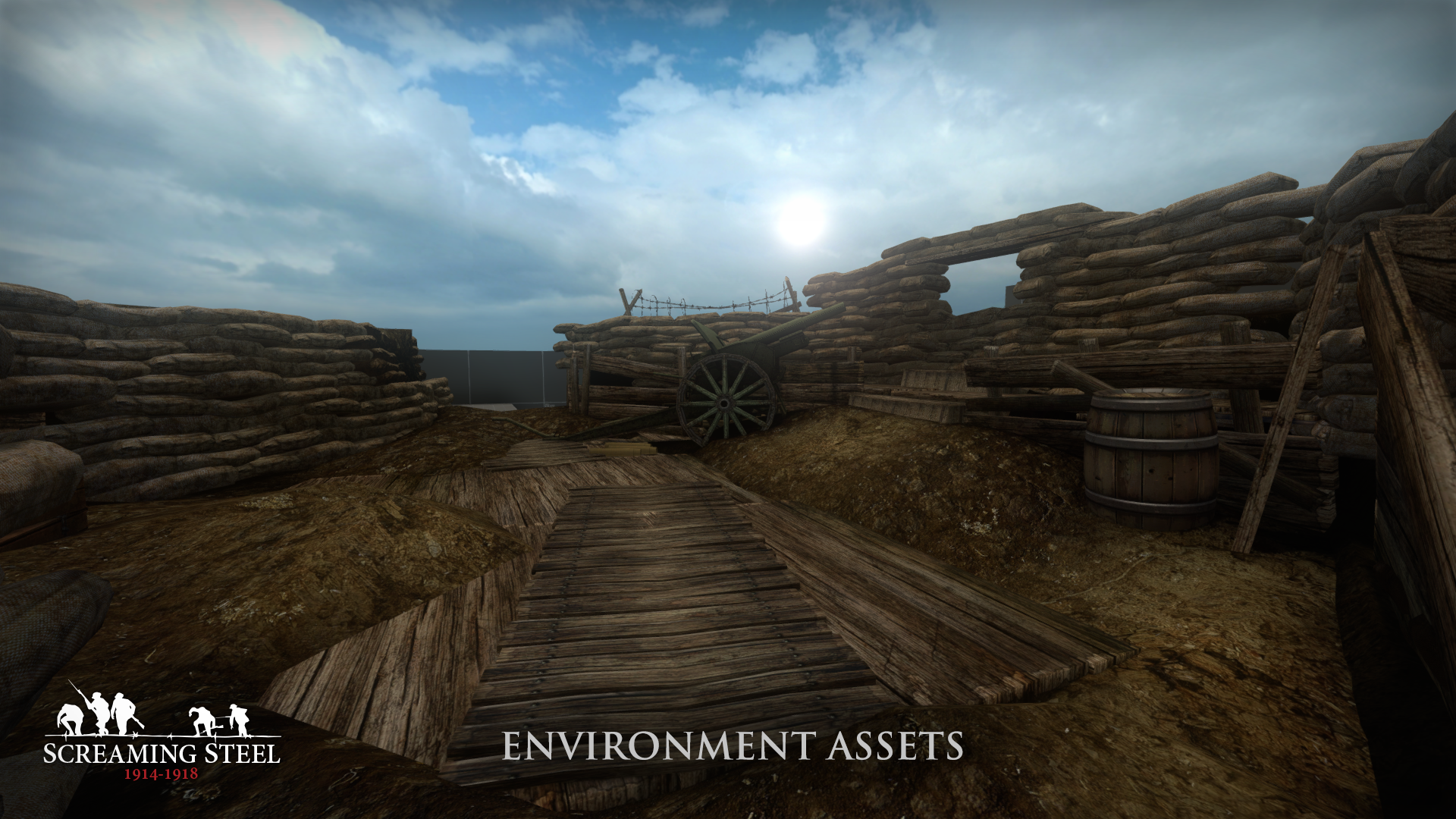 The final thing we’ll be showing off in this news update are the worldmodels for a selection of our WW1 weapons in-game, alongside with their attachments: 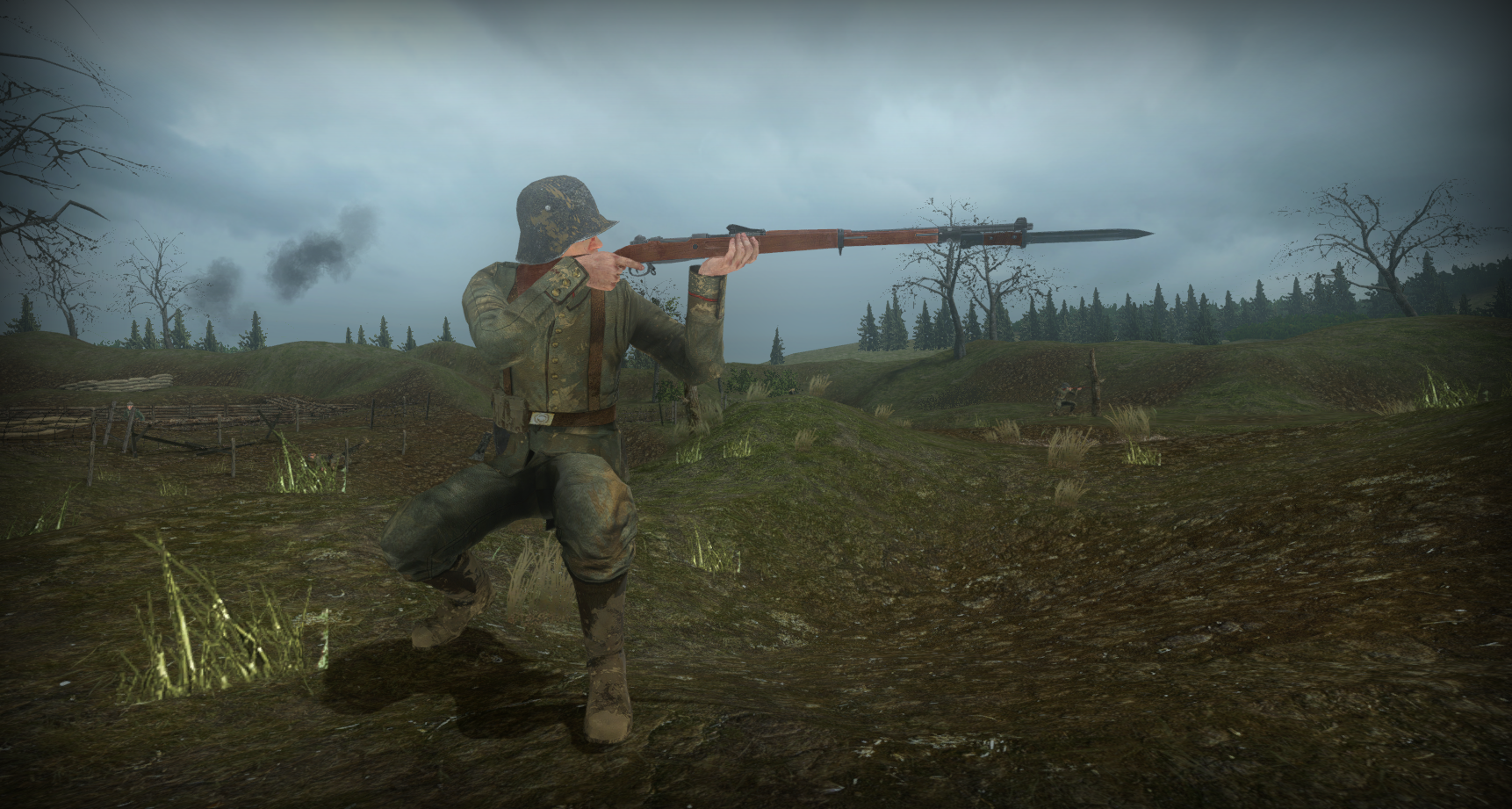 A German rifleman taking aim with his Mauser Gewehr 98 rifle,
standard issue for the German Army during WW1. 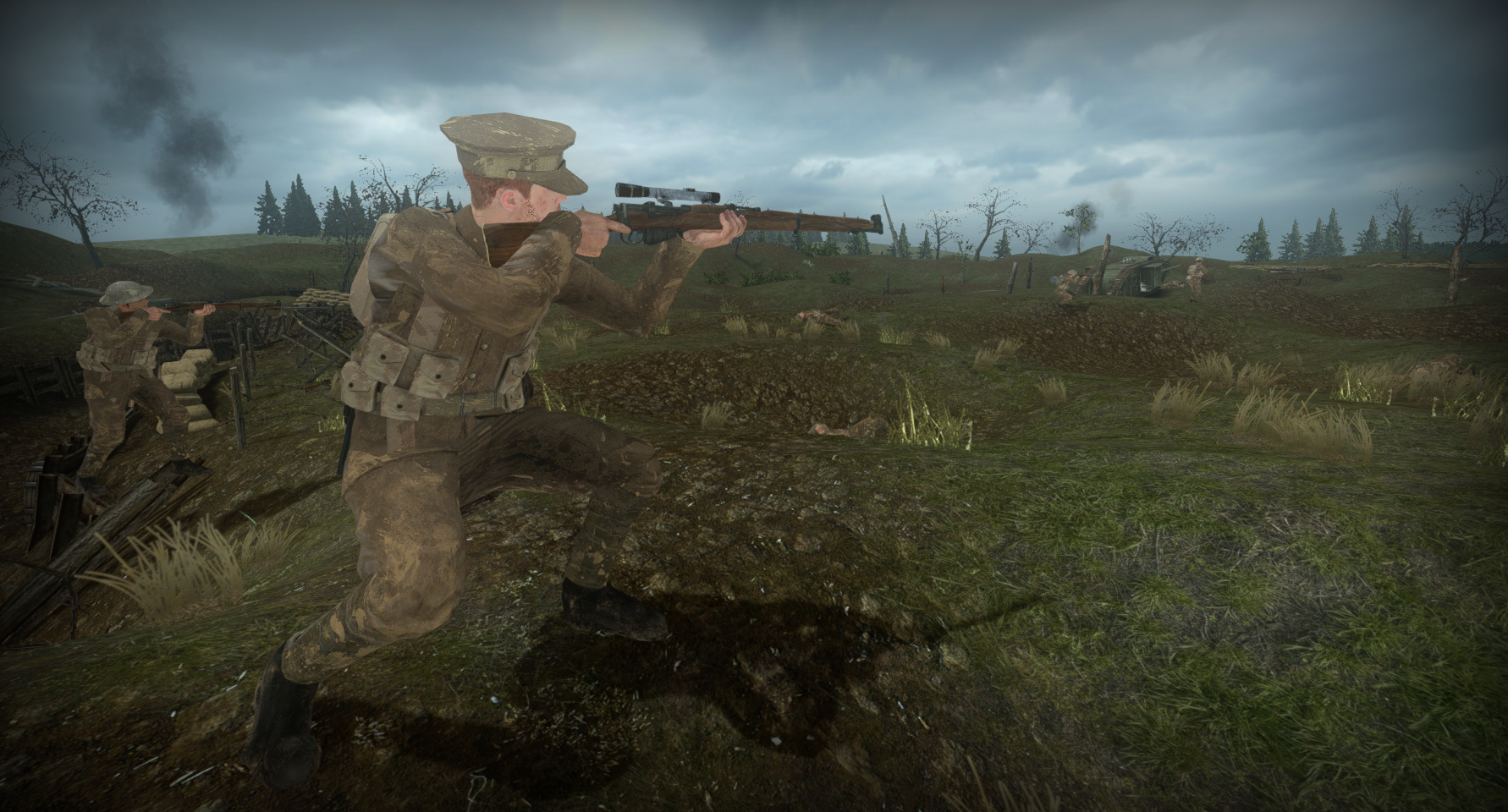 A British marksman tracking targets with his Short Magazine Lee-Enfield
with the Aldis telescopic sight attached. The rifleman in the background has an SMLE with a bayonet. 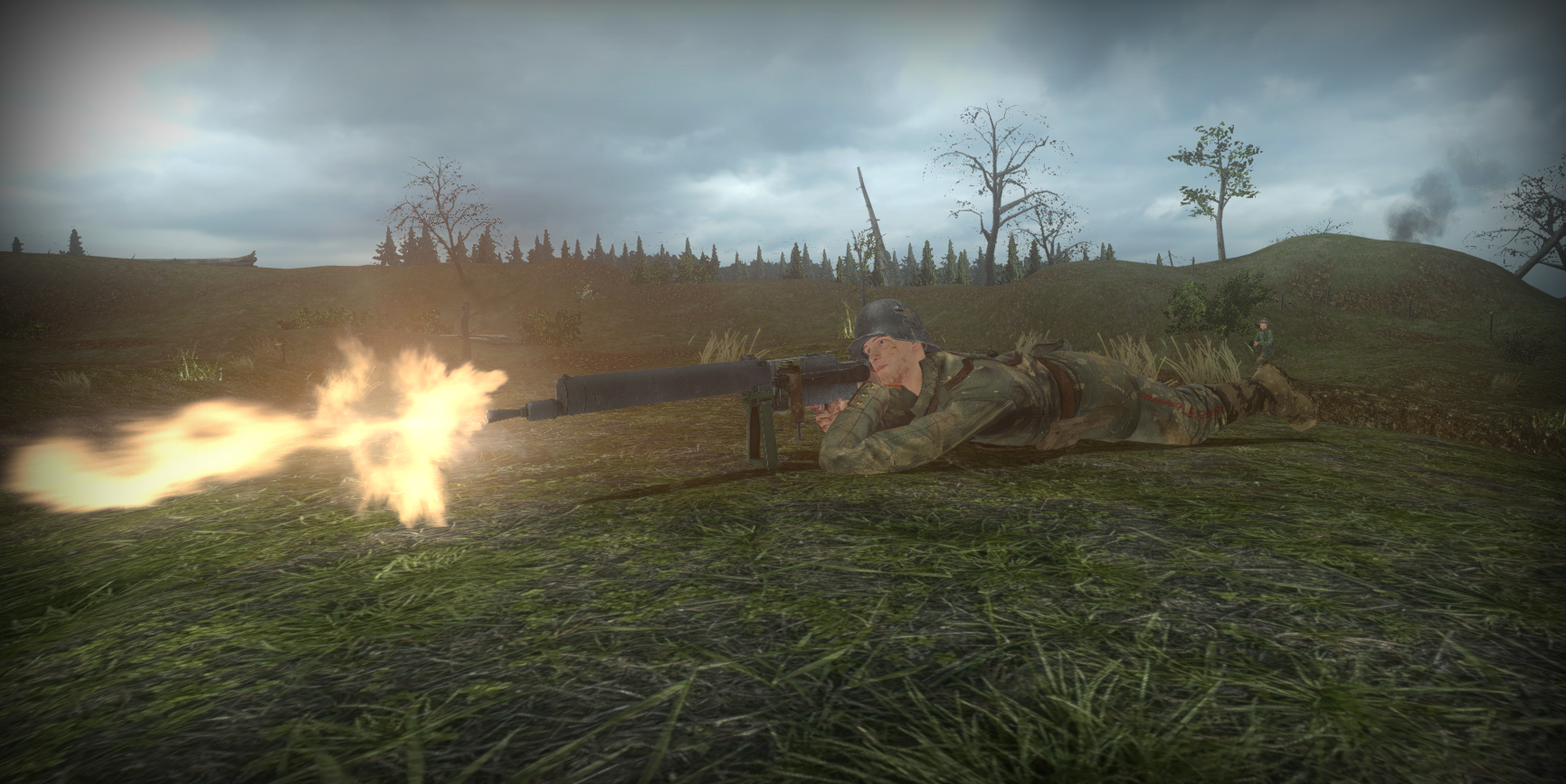 This concludes our March 2017 news update! In the following weeks and months we will be showing off more exciting stuff, and eventually announce a release date for the project. We hope you’ll sit tight till then and follow us here on MoDDb and our new Steam Development Insider group where you can catch smaller glimpses of development than what we normally post on MoDDb. It functions as a devblog, and if you have not joined the group yet, click this image below to visit it:

Cool. When can we play?

can't wait for a playable release

Very happy to see Semmel back on board. That man knows how to seriously map! You guys are taking this way past what 2.0 was ever going to become. And with a new sound designer and DOI modder, I predict a much smoother transition.

Wishing you guys all the luck we have from the 3rd Marines. Oorah!

Got to get me one of those fancy portable phonie-ma-jigs. Ill be the hippest scamp on the block.

This looks great, keep it up!

That's the real evolution we need...