Detailed description of changes between Roar of Conquest version 2.1 to version 3.0.

Bug fixes are a critical part of any mod, and Roar of Conquest is no different. It still surprises me how, even after all the hours I've spent on the mod, I am still finding bugs and coding errors! Two significant problems came up this round of modding, so I'll mention them here.

1) There was a coding error that was preventing the Teutonic Order from being able to recruit later-game militia units such as Halberd Militia and Hand Gunners from City barracks after the New Era event, (year 1300), like they were supposed to. This problem has now been fixed so that both the AI and the player will now get these units from the Militia Drill Square and Militia Barracks like they were supposed to all along. This fix should be welcome news to those who wish to crusade in the name of God in the Baltics!

2) Another problem that was fixed was a coding error which caused battles to crash whenever players fought with, or against, English armies using late-game gunpowder units such as Arquebusiers, Musketeers, and Mounted Arquebusiers. A big shout out to Minizer, who was the community member who alerted me to this problem and also told me how to fix it!

Not the flashiest of changes, but I have changed the starting level of Barracks in the cities of Jerusalem and Kiev. Both cities now start the campaign with a higher-tier barracks. Jerusalem now starts with a Militia Barracks, while Kiev now starts with a Militia Drill Square. I implemented these changes to help balance the campaign for these two factions a bit by giving them access to some of their better units in the early campaign; I have tested these changes and they do not give the Kingdom of Jerusalem or Kiev an unfair advantage against their neighbors. It does help the AI last a bit longer as these factions, and it gives the player a better selection of units at the start of these campaigns.

Possibly the biggest change for Roc 3.0, I have changed the starting regions for several factions in order to help balance the campaign; the goal was to help certain struggling factions do better while slowing down the expansion of other factions. I have tested these changes, and have been quite satisfied with the results. There will always be factions that struggle because they have a more difficult start than their neighbors, which is as it should be; certain factions need to be more challenging to help give the player a more varied experience in different campaigns. However, now it is more of a contest; most of the regions I changed now start as rebel rather than belonging to anyone, so now the campaign is a race to see who captures these critical regions first to gain an advantage over their neighbors. I realize quite a few of these changes are not historically accurate, but as I have said previously, I prioritize balance over historical accuracy in game. Now, onto the specifics:

1) The Byzantine Empire no longer starts with the Castle of Trebizond, but does start with the Fortress of Corinth. This change was done so the Empire is now split into two pieces rather than three; this helps the AI survive as the Empire much better than it previously did. Trebizond now starts as a rebel settlement, giving the Seljuk Sultanate a nice castle to conquer to bolster their empire without worrying about a full-stack Imperial army sneaking out and attacking their home territories. All in all, a minor boost for the Seljuk Sultanate and a significant boost for the Byzantine Empire.

2) The Republic of Novgorod no longer starts with the Castle of Ryazan. The castle has now been given to the Grand Principality of Kiev. This change was to help slow down the snowball of conquest Novgorod normally has and increase the survivability of Kiev. A minor nerf for Novgorod and a minor boost for Kiev.

3) The Kingdom of Hungary no longer starts with the Wooden Castle of Baia or the Castle of Sophia. As several people had commented, Hungary always seemed to snowball into a superpower early on in every campaign they played. Now, Baia and Sophia start as rebel settlements, which slows down the expansion of the AI and gives the player an extra challenge in their Hungarian campaign. A significant nerf for Hungary, but in the testing I did, they still remain a strong faction regardless.

In this version of the mod, I went over the unit recruitment coding with a fine-tooth comb, looking for bugs and duplicate scripts. For those of you wondering what 'duplicate script' means, it refers to whenever a unit's coding appears twice in the same place, causing the unit recruitment pool to be far larger than it should be. This error would cause certain factions to be able to recruit obscene amounts of certain units, which is clearly not balanced at all! Some of the duplicates were barely noticeable, but I felt it appropriate to mention the units most dramatically affected by this cleanup:

3) Arab Infantry for the Fatimid Caliphate, (specifically from the Barracks from Fortresses).

As with every releases, I tweak various units across the mod, (the vast majority of which are buffs), to help improve unit performance and balance between factions. While many of these changes are to negligible to even be noticed or mentioned, some of them were significant, so I will cover the important ones here.

1) Genoese Crossbowmen and Genoese Crossbow Militia for Genoa have received buffs to their melee attack and defense stats, making them undoubtedly the best of the Pavise-style crossbow units.

2) Longbowmen, Yeomen, and Retinue Longbowmen for England have all received a +2 to their armor, bringing up their defense significantly. This change helps make them more survivable in archery duels and in close-quarter combat.

3) Highland Nobles, Galloglaich, and Noble Highland Archers for Scotland have all had their defense increased, making them more sturdy and survivable.

4) Mamluks and Mamluk Archers for the Fatimid Caliphate now only take 3 turns to recruit instead of 4. Mamluk Archers have also had their defense stats increased, solidifying their status as an elite horse archer.

5) Battlefield Assassins for Hungary have been made more restricted; they are now available from Barracks in Fortresses instead of Drill Squares in Castles. This change was made to help prevent Hungary from snowballing in the early campaign, as this unit was too elite to made available so early.

6) Flagellants have replaced Marinai in the Kingdom of Jerusalem roster. This change was done for two reason. One, the Flagellants are a more useful unit than the Marinai in combat, especially since the Flagellant now has 3 armor-piercing attack and 8 defense overall. Second, I always felt a unit of what are supposed to be sailors charging into combat with sticks was a bit ridiculous and stuck out on the battlefield. Since the Kingdom of Jerusalem is a Crusader State, it would make sense that they would call upon pilgrims in time of war as well, so putting in the Flagellants did not seem a far-fetched inclusion. Flagellants have the same availability for recruitment that the Marinai did, starting with Town Watches in Towns. 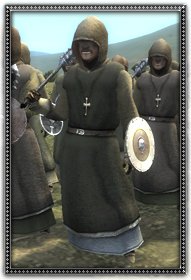 As you have already seen, quite a few settlements that once belonged to one faction or another now start the campaign as being owned by rebels. I have made changes like this in previous releases, but never so many at a time. As such, I have also gone and edited the garrisons that these rebels start out with in these regions, including settlements that I made rebel in previous releases. The general rule of thumb is that the garrison sizes are larger than the were when owned by other factions, to make them more challenging to conquer. However, there were a couple of exceptions which I felt were worth mentioning.

1) The rebel garrison for Athens, while still large and of good quality, has been reduced. This change was to help give the Byzantine Empire a little boost in the early game, and to make sure that Athens would in fact be captured. I noticed the past that, even 100+ turns into the campaign, Athens would still be a rebel province, but that should no longer occur now!

2) The province of Riga now only has one, weaker rebel army at the campaign start instead of two strong ones. This change was to help make the start of the Teutonic Order campaign easier, though it is by no means an easy campaign!

So there you have it, the change log for version 3.0 of Roar of Conquest! As for the future of the mod, I currently have no major changes planned for the mod. I am by no means abandoning the mod; I will continue to support the mod and will plan on fixing any bugs that I or others come across. Recently, I reached out to the community on Total War Center to see if anyone would like to join me in working on Roar of Conquest, specifically in upgrading the visual appearance of the mod. Currently I have not heard back from anyone, but we'll see what happens! For those of you who like what you saw and would like to try out the mod for yourself, you can download it here: Roar of Conquest 3.0 Now, go forth and conquer!

Unfortunately, the AI couldn't handle the Empire being in three parts, and Trebizond was really difficult to keep as the human player. Truth be told, I would love to make the Latin Empire an actual faction in the game, which is why I am looking for a modding partner for visuals; a new faction would need it's own banners and heraldry to do it justice!

Are you a history major too?

Not a history major, just a guy who likes history, modding, and pizza lol.

and will it require a new game or can my 3.0 saves work with it?

Sorry I didn't notice your comment earlier; version 4.0 is releasing today, so downloading it may be easier than truing to install the patch.