Good evening, ROTR fans. After the release of 1.72, we are proud to present you the first update in a series of weekly updates that will showcase the features of the European Continental Alliance. Alongside the usual media renders and content descriptions, we will also shed some light on the ECA's backstory, going back all the way to the...'confusing' events of Zero Hour and working our way forward to the outbreak of the Russo-European War and beyond. We sincerely hope that you will enjoy the sh

Good evening, ROTR fans. After the release of 1.72, we are proud to present you the first update in a series of weekly updates that will showcase the features of the European Continental Alliance. Alongside the usual media renders and content descriptions, we will also shed some light on the ECA's backstory, going back all the way to the...'confusing' events of Zero Hour and working our way forward to the outbreak of the Russo-European War and beyond. We sincerely hope that you will enjoy the show and get straight to the business without further ado.

While China and the US spent the bigger part of the 2020s fighting the GLA, the European Union was minding its own domestic business, and for good reason: Years of failed financial and social policies and the ever-increasing empowerment of the Brussels-based central institutions, fuelled by the ill-conceived vision of creating a unified super-state, had turned the continent into a hotbed of civil unrest long before the GLA set its sights on it. In the light of political turmoil and a gaping divide between rich and poor, the aloof, self-serving leadership ruled in favour of even more centralised control, hoping that these issues could eventually be solved through myopic actionism and social engineering alone. During the twilight years of the Union, the situation had deteriorated to the point where armed resistance movements sprung up and tried to wrestle control away from the central government. A few of these attempts were relatively successful thanks to parts of the armed forces siding with the secessionists while the less lucky regions soon found themselves 're-integrated' though peacekeeping operations which are still the subject of judicial trials.

The GLA's supreme leader General Mohmar alias 'Deathstrike' had chosen his target wisely: The Union Republic of Germany was the central hub of all continental resource transportations and the EU’s last somewhat functional economy after years of bail-outs and monetary inflation. A coordinated attack against its financial heart would bring the entire Union to its knees and subject its decadent people to a level of brutality that they could not even imagine. In early 2028, the German police and military forces, weakened by budget cuts, mutinies and oversensitive rules of engagement, found themselves caught by surprise when a series of common day-to-day protests escalated into a full-blown uprising. Amidst the chaos, a vanguard force of the GLA's most experienced fighters swarmed onto the streets and launched an armed insurrection in Hamburg while cargo ships from North Africa unloaded heavy weaponry into the city's port facilities. After the entire city of Hamburg, with its population of almost two million people, was taken hostage and fortified as the GLA's base of operations, heavily armed raiding parties fanned out into the country, demolishing vital infrastructure and killing everyone in their path. Many of their would-be followers had found their way into Europe long ago as part of the unceasing stream of refugees from the war-torn hotspots of the world. Lacking the necessary special education for a post-industrial society with rapidly eroding social systems, most of them ended up in the derelict, crime-ridden ghettoes of major cities where the uprising gave them an opportunity to vent their fury. Those who refused to join the cause would be coerced into it by force or murdered on the spot. 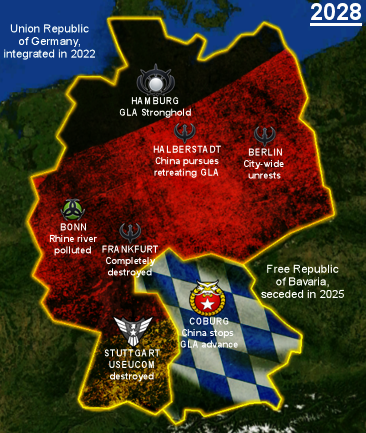 To the west, self-proclaimed 'anti-capitalists' under a young volunteer known as Ibrahiim polluted the entire Rhine/Ruhr river system with chemicals, leaving large swathes of land uninhabitable for decades to come and drawing a toxic border through western Germany in an effort to deter other European forces from entering the country. Even Deathstrike was impressed by the unforgiving craftiness of the native Frenchman and subsequently involved him in his plans for the decisive attack on Frankfurt, Germany's financial capital and home of the European Central Bank, which was completely razed by GLA forces. Meanwhile the neighbouring countries kept their armies on stand-by to contain the insurrection in Germany, watching helplessly as some of their own cities got silenced under a deadly veil of bio-chemical agents stolen from an American laboratory after the death of Dr. Thrax. Mere hours before the GLA fired all of its remaining arsenal of Scud missiles at the European district of Brussels, the desperate EU government called upon the Chinese to intervene as a last remedy. Within weeks, PLA rapid response forces were deployed to Germany and proceeded to pacify the GLA-controlled areas while making liberal use of napalm, EMP and neutron weapons in the process. In the end, the GLA's 'invasion' of Europe was not logistically sustainable. But Deathstrike had never intended it to be. For more than a decade, his strategy was to inflict maximum damage with a minimum degree of commitment. This doctrine was what made the GLA swift, deadly, and nigh-impossible to eradicate. The attack on Europe was meant to be his final masterpiece. If a minimum degree of commitment could accomplish such feats as the nuclear attack on Beijing or the Baikonour rocket strikes, he reasoned that a full commitment of all available resources, equipment and manpower would accomplish nothing short of the near-total annihilation of a global juggernaut and a turning point in the history of civilisation.

When Chinese forces spearheaded by General Shin Fai's famous infantry corps finally managed to penetrate the Hamburg perimeter after over half a year of vicious fighting against urban guerillas and rioters, Deathstrike knew that he had already gone down in the records of humankind as a conqueror as infamous as Attila the Hun or Genghis Khan. Now, he too had become the 'scourge of Europe'. And with that, he was content as he and his loyal lieutenant, the 'Death Merchant' Anwar Sulaymaan, boarded the last stolen plane out of Germany. Meanwhile, the infamous bombmaker Rodall Juhziz' and his ever-fanatical Scorpion Cell were ordered to stay behind and obliterate downtown Hamburg with a high-yield strategic nuclear warhead in one final, world-changing cataclysm. The earth was scorched and Europe would never be the same again... 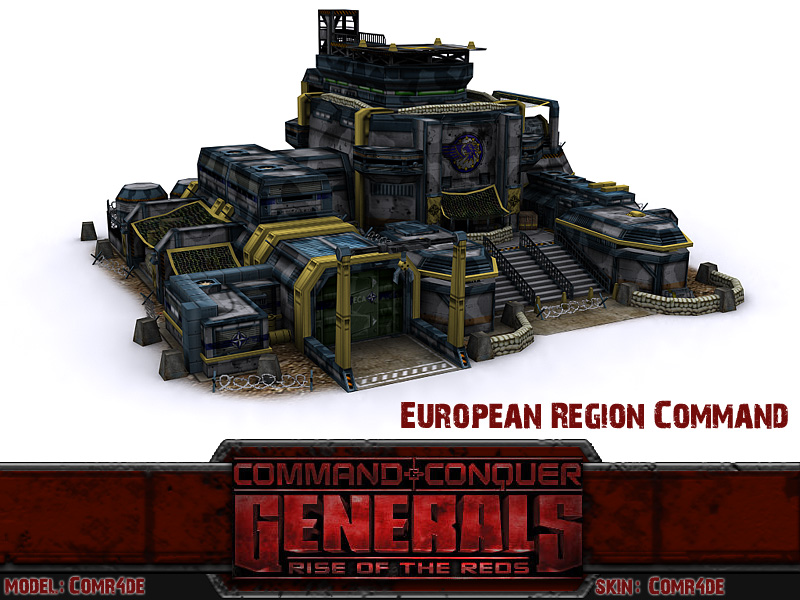 This towering fortress of authority acts as the ECA's command centre. It can withstand a considerable amount of punishment thanks to its heavily reinforced concrete walls and is usually the oldest structure in a European-controlled front sector as evidenced by the presence of motivational posters and graffiti which, despite being against official regulations, have not been ordered removed by the rugged senior commanders housed inside this facility. In addition to being the nerve centre of ECA battlefield control, the Region Command is equipped with a powerful diesel generator that provides sufficient amounts of power for the early phase of a battle and the sturdy bunker structures can be garrisoned by infantrymen who are willing to fight until the very end. Due to its strategic importance, there can only be one Region Command in a sector at a time. 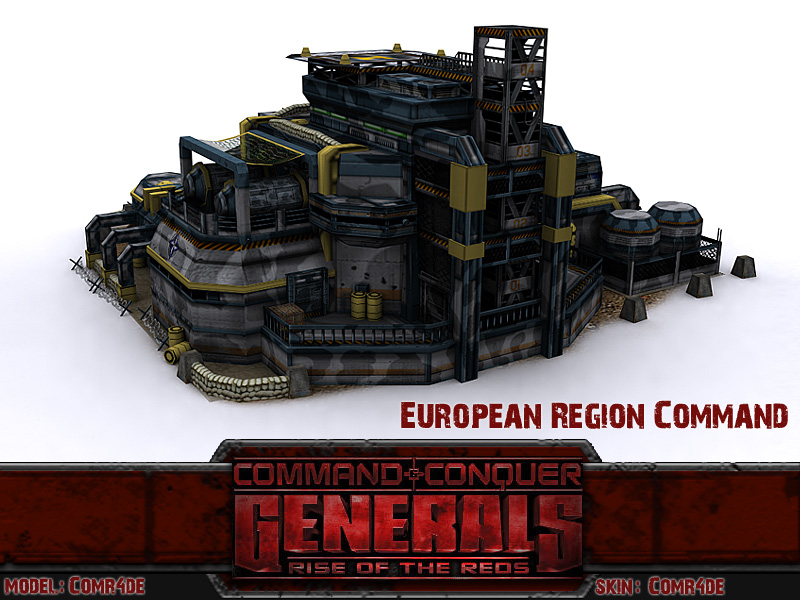 Internally, some of us like to refer to this as the 'Nazi Doom Fortress'. 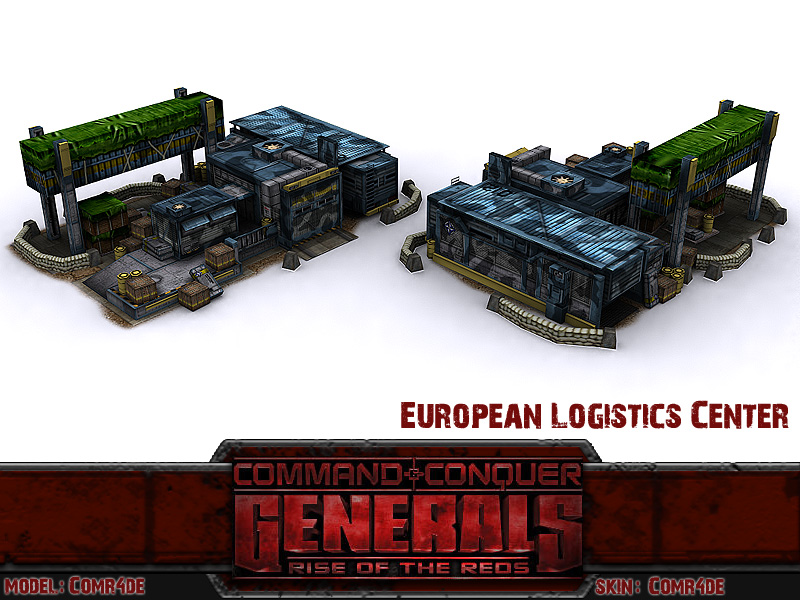 Quick deployability across the entirety of its territory has been one of the main strategic benchmarks of the European Continental Army since its creation in 2034. As such, the multinational task force utilises a wide array of structures that consist of pre-fabricated containers and building elements, allowing European forces to set up shop on the battlefield and become fully operational as quickly as possible. The Logistics Center is one of these structures, acting as a central drop-off point for military supply units and civilian logistics contractors whose equipment and manpower have been drafted to support the war effort. After all, any armed force in the world is only as capable as its logistics branch. 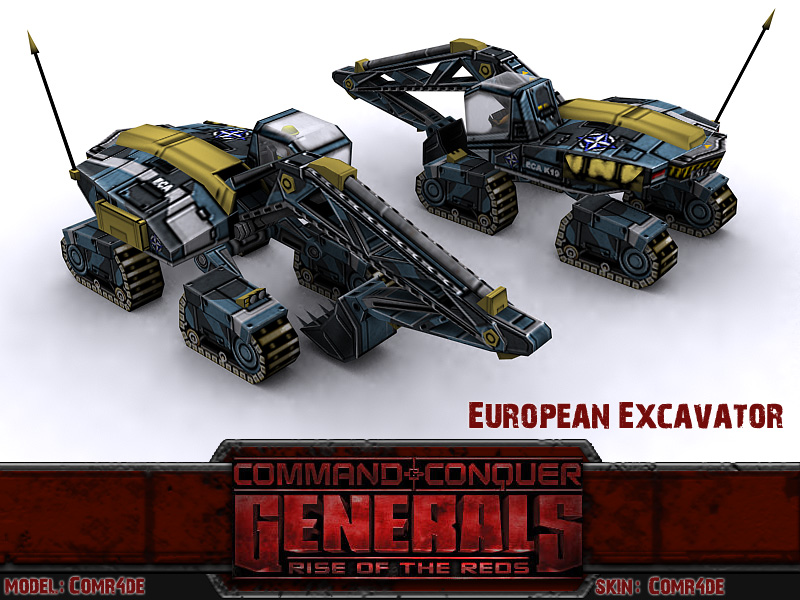 Produced by a Swedish utility vehicle company, these high-powered Excavators are operated by civilian engineering contractors in service of the European Continental Army, providing the task force with quick on-site construction capabilities. 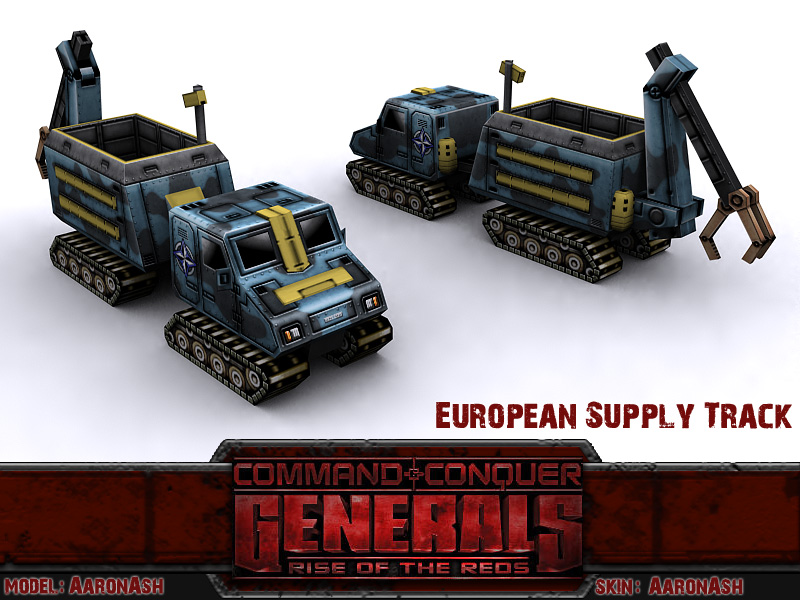 These unarmed logistics vehicles act as the ECA's primary supply gatherers. Their sturdy tracks allow them to negotiate even the most difficult kinds of terrain and their shipping space is large enough to carry a sizeable amount of provisions.

And as always, be sure to check out exclusive screenshots, polls and other news regarding the mod on our facebook! See you next week!

Seriously,Even Russia does better PR then this!

but kudos on the update. Can't wait for the ECA!

and holy **** Germany sure get's the short end of the stick in this whole business. Damn it.

Well, atleast you don't have to work :P

You will see it when we post it as part of a scheduled update, just like everyone else.

because all Germans are Nazi, yes?

Seriously, what does it even has to DO with nazi's? Where in this update, the word NAZI even came up?!

Look under the second picture of the ECA Headquarters and you will find it.

Now I made a idiot out of myself.

These models look insane guys! The ammount of work gone into them must have been ... a whole lot indeed :)