Hello everyone, I'd like to report that due to the size of changes of our new patch and the fact that some of our developers have had RL stuff to take care of outside of modding we've experienced a few delays for development of the patch. Because of this we decided to do another public beta testing round so that we can iron out all the problems (like we did before shortly after the 1.8 release back in 2013).

Hello everyone,
I'd like to report that due to the size of changes of our new patch and the fact that some of our developers have had RL stuff to take care of outside of modding we've experienced a few delays for development of the patch.
Because of this we decided to do another public beta testing round so that we can iron out all the problems (like we did before shortly after the 1.8 release back in 2013).

What does this mean?
Basically everyone on the forum will be able to access a new section in our main forum (when it comes online) in which you can download a "Test Build" of our new patch.
In this new forum you can also post feedback and it will likely receive regular updates every few days to fix errors and adjust gameplay to how we feel is most appropriate.

We've put together a basic FAQ here which we hope would answer most of your questions regarding public testing:

Q: When does this public testing phase begin ?
A: Although we cannot answer exactly when, the expectations are sometime next week (first week of May 2015)

Q: How long will the building beta testing phase be?
A: As long as it takes to iron out most of the problems and ensure that all features are working and used as intended.

Q: Can I still get the Test Builds If i'm not registered on the forum?
A: Technically not but you could always ask someone who is registered to give you a link or download directly. (although we would appreciate if you do register since otherwise you will not be able to give feedback)

Q: Are the Test Builds standalone or do i need any other files ?
A: Although the Test Builds use their own launcher and files it still requires the latest public release of Rise of the Reds V1.85 to work properly.

Q: Will these Test Builds mess up my regular public release of Rise of the Reds?
A: No, they shouldn't do that but as with testing early products there may be some problems that aren't ironed out yet so use it at your own risk.

Q: When the proper version of 1.851 is released do I need to uninstall the Test Build of it?
A: Technically not but its still recommended as its no longer of further use.

Now thats out of the way onto the good stuff for this update: 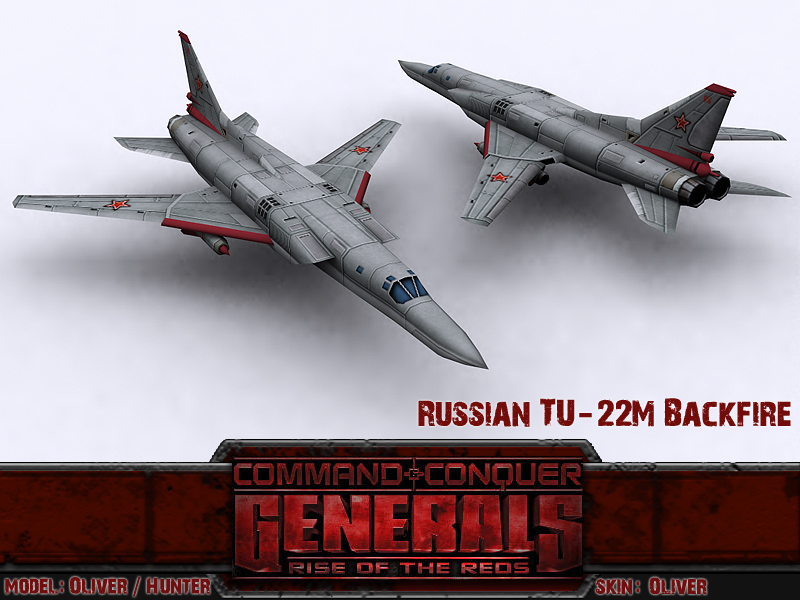 Introduced in the early 1970s but perpetually modernised over the decades, the Tu-22M serves the Russian Air Force as a strategic strike bomber. Its variable wing geometry and powerful engines allow the Backfire, as it is still called and feared by the Americans and Europeans alike, to reach the battlefield upon a General's request very quickly, where it then delivers its deadly payload of cruise missiles in order to punch a hole into the enemy line. During the first days of the Russo-European War, several squadrons of Backfires, escorted by Berkuts and Sokols, bypassed the inadequate European air defences on the Scandinavian peninsula and raced across the North Sea, towards the strategic port of Rotterdam. What followed was an attack that would attain infamy as the 'European Pearl Harbor', as the Backfires obliterated much of the port together with the multinational fleet that was still preparing itself for deployment: When the Russian planes made their get-away a mere half hour after the first volley of missiles had struck into the French aircraft carrier Villeneuve, the Europeans had effectively lost three of their Sovereign-class battleships, several destroyers, frigates, corvettes and submarines as well as a half dozen supply vessels, painfully proving that the Backfire would remain a force to be reckoned with as the war exploded across Europe.

We actually wanted to give you a visual update for the Backfire with the release of 1.85, but the model was not finished in time. Now, you can expect this beauty to make an appearance in the upcoming patch. 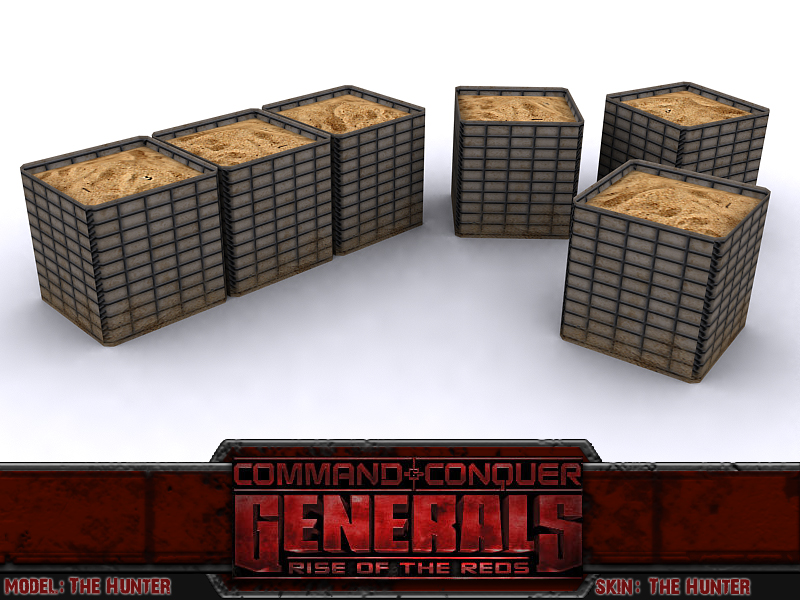 Upon request by the community, we have decided to add these deployable sand bastions to the Worldbuilder. These objects are completely inert and purely cosmetical, but should come in handy for those interested in depicting a large military base on a map of their own design.

Also this upcoming sunday we will be doing a special stream featuring the internal version of Patch 1.851 rather than public games.
We will also likely disscus some details about the public testing we mentioned earlier and you are also welcome to ask questions in the chat regarding it. 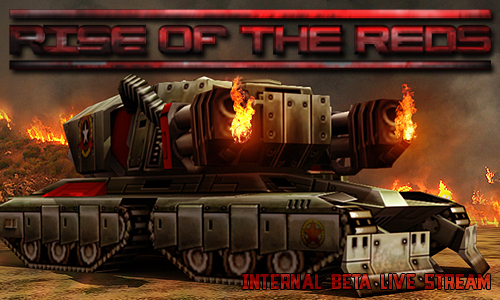 Also, in case you missed last week's stream, you can check it out on our Youtube channel here and here

Will you add dogs of war [zh] even if it got replaced by hounds of hell [rotr]? Please, I request it.

Also fix a bug on world builder not reconising factions eca and russia!

Test it and get it as bug free as possibly, nice. Btw, the latest release crashes when using the USA side, not any other.

Keep up the awesome work, loving the new screens. Backfire looks tasty and the new sand bastions are sweet! Always love to see new objects that will add to maps :)

Hello i want to creat an SWR acount but in the place were i shoul insert my e mail adress i get tis error!

can some one help

ore tell me wat kind of email adres I nead

I have a different issue since my old account got suspended, and I can't make a new one with my mail address.

This still will not work with ultimate collectors editions installed thru origin. First I did ready the instructions with the mod and installed it just as the readme file states. First thing that happen was the swr.net was outdated (comes with 1.0 and needs like 1.01 to even launch) so I down loaded it and installed. Then as no surprise I hit the hot key to rise of red it came up with the launcher so I hit the launch button. Guess what???????????? The same friggin thing that happens since day one the origin tab thing came up with a choice of either launching generals or zero hour. Can you imaging what happens next???????????? If you select either option this friggin thing launch the base bullshitthat I had before the mod was installed. Totally ****** here. I thought by what I had read in the readme.txt file that they had finally addressed this issue that has been here since day friggin 1. But oh no you get the same crap.

Now This is a truly awesome mod, I really want to play for myself instead of watching those candy *** youtube vid's covering the game play. Sadly I guess I get to uninstall this mod instead.

I would suggest to the mods to please state up front if that if you have the ultimate collection installed in origin this does not work. Stop wasting our time and by doing so maybe you wont get some jack *** like me rage hating the form on not being able to play your mods simple because they bought the game the easiest way thru origin ultimate collection. Its simple money people why spend 5 to 10 bucks per a generals game when you can get them all for around 12 bucks.

I can understand you have C&C thru a different means, but today the best way to get all the command and conquers, red alerts tiberium suns is by buying the ultimate collection. If you guys don't support that fine! But do us all that where not lucky enough to get this other then thru origin ultimate collection a Favor and put something like Rise of the reds 1.85 release (if you have origin Ultimate Collection don't bother, because we don't have that version of the game and don't plan on make a mod that works with it) Give us some kind of warning up front.

Last if for some reason I just have been a ******* and missed something on how to use the readme.txt file include in this mode. Forgive me for trolling your forms.

I think this is a very outstanding looking mod and I am sure work hard on it, but I ask you to remember how flustrating it is to get a new toy and it doesn't work

What happened to 1.85? Errors come more fatal :( The scripits and INIs seems to have missing or broken codes