Here is a small update on the Rise of the Reds patch Version 1.851 development. 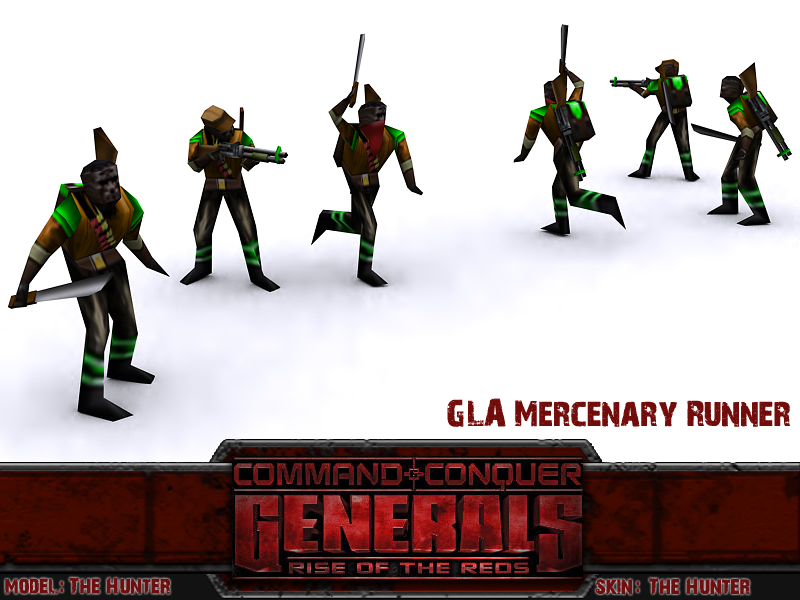 As of the upcoming Patch 1.851, the GLA will have access to a third Mercenary unit. Available as early as Tier 0, the Runner is the most lightweight and cheapest of the three Mercenary types. His primary armament is a machete which is now exclusive to him and allows him to close in quickly with enemy infantry in order to deliver a killing blow. Alternatively, he can switch to a reliable pump-action shotgun for up-close engagements, making him an excellent close quarters combatant. 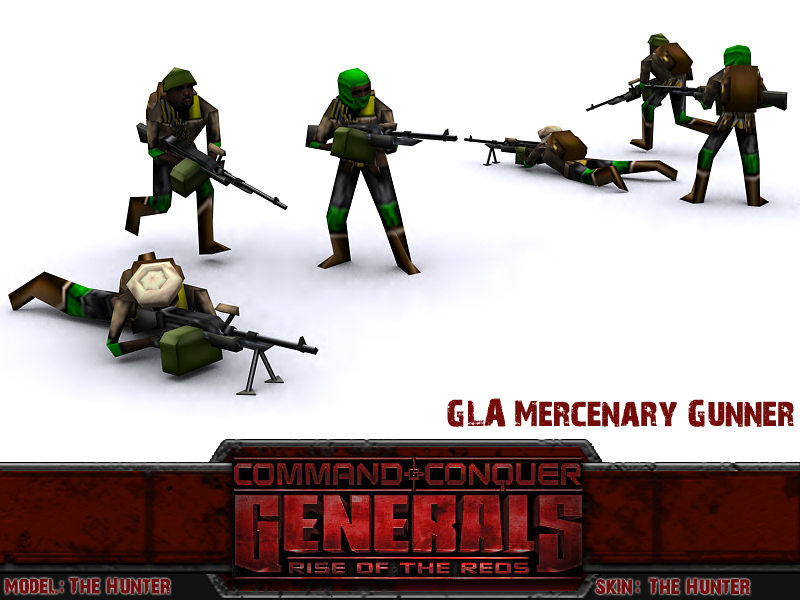 Not only does the Mercenary Gunner now come in three different visual variants, but his functionality has also been modified: His ability to dig a foxhole has been removed and replaced in favour of a more straightforward stance switch, allowing him to change between walking stance and prone stance. When prone, the Gunner will receive a damage resistance boost and fire his machine gun without interruption as opposed to the bursts he would fire when standing. When ordered to go prone, the Gunner retains his ability to move, albeit at a slow crawling pace, so altering back to walking stance is advised when it comes to taking the fight forward. 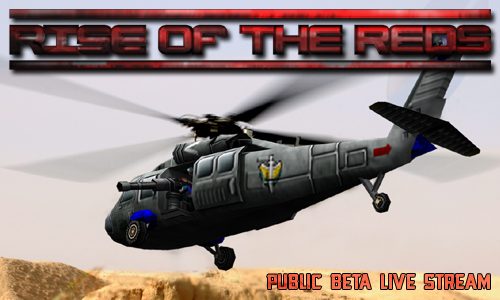 I've noticed that there are certain maps the USA faction can't play on. I can't tell if it's a bug or my ROTR didn't install properly.

Anyone else get this problem?

Speaking for myself, not really, but could you name the maps? Just to try them out as USA.

will the USA crash bug will have a fix in this upcoming patch?

I guess it could be the problem caused by the problem of Chemical Suits upgrade and the infantry training general power... If you upgrade them both, there is a very high possibility that the game would crash.

I can believe it. Often times i don't give the infantry training ability, then go about the battle... the match goes fine. So I can believe that's the problem. Besides, USA already has the Advanced Training upgrade, so I don't need to use it anymore.

the game crashes after 20 mins or so when you take the general point that gives infentry veteran states at building, and make the chemical suits upgrade.
just avoid having both of those at the same time.

Now that I know, I'll be playing the USA faction more often.

curious. why would it crash with those 2 upgrades. very odd.

Does it work on a Macbook pro?

ROTR doesn't support Macs anymore. Why? Because it causes unfixable bugs and features to be disabled.

These new dudes with MG look really great. Ability to change stances is also a good idea. Would be great if other infantry also gain this ability one day (as well as a stance "on a knee").

Just one remark. Shotguns for GLA rebels look rather alien. If they are not using their AKs, most likely they'd utilize some kind of (even home-made) PDWs. On the other hand, any types of shotguns would fit much more for US and EU units.

The GLA shotguns look like old Ithaca 37s so plausible.

those aren't GLA troops, those are merceneries.
there are varius areas of specialty within that line of work.
just think of it like that, and it'l go smoothly.

Nah, you probably don't want that feature in most troops at all; It's kinda micro-managey, and it looks like the team is, understandably, trying to move a bit away from that, in regards to infantry.

As far as their weapons looking out of place is concerned; They're mercenaries, and they've been outright stated to have a hefty price tag, and all the shiniest equipment the most powerful and well connected warlord in the world can get his grubby hands on.
So, really, even for the GLA bastard child of an Attack Dog, and a Vanguard, you could argue their boomstick isn't expensive enough. :P

hey i wanted to say your mod kicks *** i mean it kicked my *** i was playing as mother Russia, and i was like i so got this and i was geting hit by GLA air i thought i could handle what they were tossing at me,any ways long story i got owned i made a note to my self make sure you have air cover. some AA's you made this mod really good man really good, and its cool the AI not dumb they will kill you if you don't do things fast.

Loving the new changes to GLA, Mercenary's look badass! My only major gripe is with their structures foot prints all looking the same(!). It's hard to tell at a glance what the role is of each structure as they look all the same!!! Before at least for example, the Black Market or Soldier camp looked distinctively different by their shapes. I also hope the European side get's some much needed ove soon.

It's a devious strategy to confuse the infidel's aerial photography and spysat operation.

Unfortunately, Many newly appointed GLA cell commanders (including me) still not get use to it and often cause some inconvenience as well, primarily on issuing orders on wrong facility.

"It's a devious strategy to confuse the infidel's aerial photography and spysat operation." - ha ha ;)

Not just me then finding it hard to defining structures then on the GLA side.

-for the developers
please consider my little suggestion of main page. If my suggestion will be included for the incoming patch, that'll be great ^^

Developers.... i salute you for your hard work on this project. Its f... -apping amazing