In which mist-work continues; an export tool gains new functionality; critique is taken; and a cutscene is nascently reworked.

This week's screenshot shows work towards a revised cutscene: 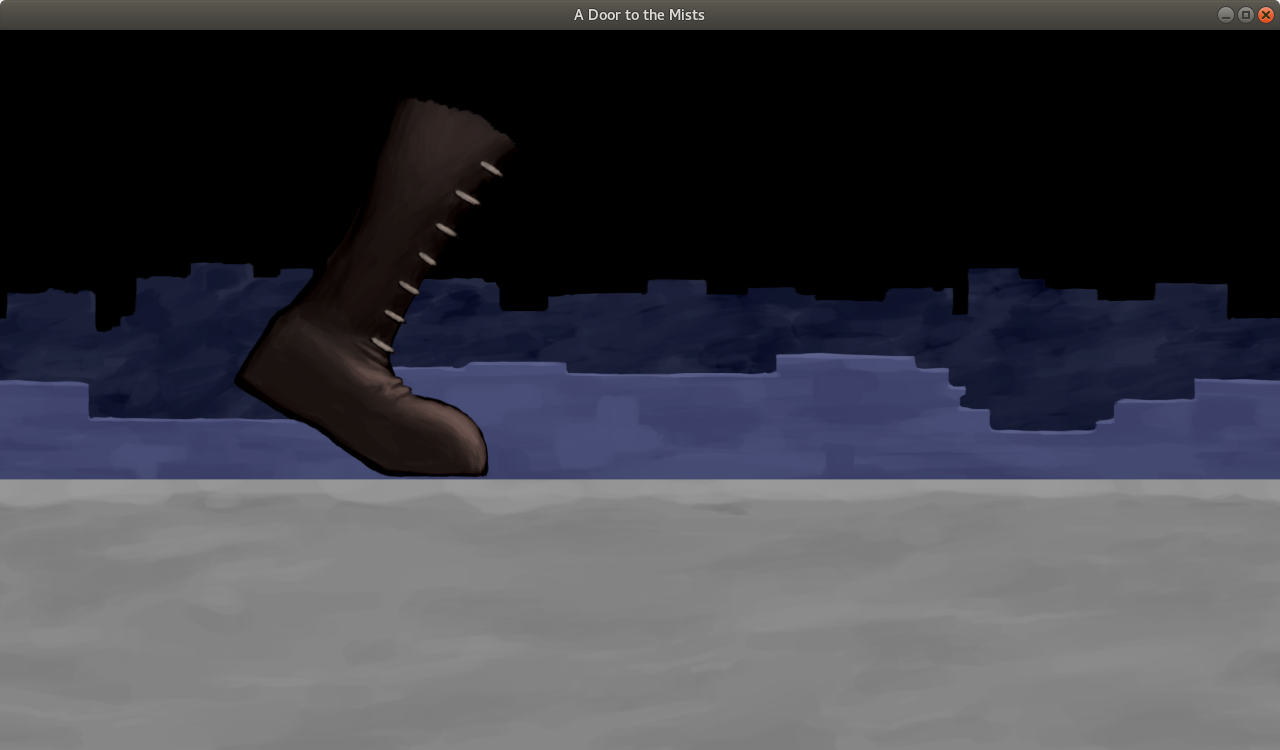 The week just past was essentially an art one--but involved some technical elements in support of that:

To start with, work continued on the mist-effect that I showed in the previous two blog-posts, and on elements related to it in level six.

Some of this involved further finessing of the effect itself (I had a problem with it intersecting certain geometry, for one). But another part of it was that I ended up modifying the export-tool that I use to allow, to some degree, for the use in the final model of Blender's "data transfer modifier". Given a piece separated from the main of a wall, this allowed me to match the edge-normals of the former to the latter, causing them to blend together nicely.

However, all that said, I don't want to show much more of these elements for fear of spoiling too much!

On the cutscene side, I had shortly before the week just past (if I recall correctly) discovered that I had some critique waiting for me regarding the intro cutscene to the game.

You see, I had, quite some time ago, requested critique in a thread in a writing sub-forum that I frequent. The thread moved slowly, and I forgot about it.

The critique included some praise and some criticism, as I recall. But perhaps most saliently, it reiterated a piece of critique that I had previously had: that the narrative wasn't conveyed very well as I had it.

So, in the week just past, I set about reworking it, taking into account the feedback that I had been given.

It's still very much a work in progress, but you can see some of what I've done in the screenshot above. In particular, what's shown there is a still of a boot in mid-run.

There are currently two scenes after this: A brief one showing a boot leaping from a ledge (albeit currently with nothing but the boot itself), and a longer one that as yet shows only the protagonist in mid-leap. That last draws its pose from a wallpaper that I had previously made, although I'm in the process of re-shading it, and have fixed (I believe) an issue in the character's proportions.

In addition, I didn't want to throw out everything of the original intro cutscene. But conversely, my cutscene system doesn't really provide tools by which to move scenes around.

So, in the week just past I implemented a means to save individual scenes out to a file, and to append them into a cutscene from those files. This should allow me to start fresh, but to nevertheless keep some of the original work!

And over the course of the week I also enacted a few minor fixes and changes that don't seem worth mentioning here!

And finally, here's a short gif of that running animation from the above-mentioned work-in-progress cutscene: