After over a year of work from the second release, the third massive update to the Original Trilogy mod is now public.

Much new content has been added, including the first official mission of the campaign, model point shields that are more accurate to the movies, cockpits, and a plethora of other features. In addition the big bugs have been fixed, along with a wide range of smaller ones. Also, balancing issues have been incorporated, such as increasing the effectiveness of turret AI, spacing of better LODs (for better performance), and overall ship hit point balancing.

First off some Version 3 screenshots: 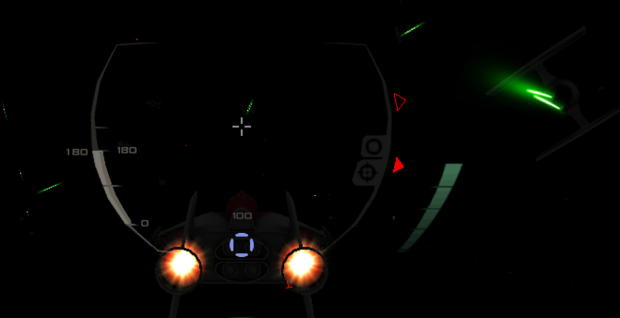 A-wing squaring off against a TIE Fighter.

The new shield system. For example a SD can now lose it's bridge deflector shields. 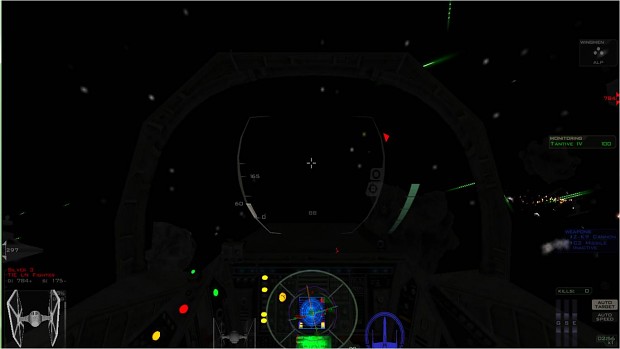 View from the first mission.

Full Changelog to Version 3 (from Version 2):

Additions:
- Added the first official mission to the Star Wars Original Trilogy Campaign. It is even mostly voice acted thanks to Altureus and Gen_Rhys_Dallows.
- Added 'model point shields' as a part of the newest features of FSO 3.7.2. Now, as in the movies, craft like X-wings have front and rear deflectors and larger ships have 'Bridge Deflector Shields' and ect. Similarly updated all shield HUD images to fit the new shield system.
- Added full ship cockpits for the following craft: X-wing, A-wing, TIEs, Falcon, Y-wing, and Z-95. The cockpits are especially nice for Track IR users. Also, these will likely get improved at later releases. On a side note: these are public assets from Star Wars Galaxies.
- Added a full custom Star Wars style interface background. Thanks to coffeesoft for all the hard work with that one, it looks great.
- Added a fun new mission, thanks to FekLeyrTarg. Be prepared to ambush some assault gunboats with a squadron of X-Wings.
- Added DS Surface and separate turrets for mappers. Thanks coffeesoft.
- Added hit/kill indicator, thanks BlasterNT.
- Added better radar images to differentiate fighters, bombers, and capital ships.
- Added In-Mission Techroom Script so you can review/analyze your ship and weapons, and your target's ships and subsystems during a mission (it automatically pauses the game). Thanks to FelixJim.
- Added mouse script for convenience of trying to hit or avoid fast moving TIEs. Thanks to Sushi for the modified version.
- Added guided missiles script, so other modders could play around with it.
- Added turret rotation sounds.
- Added animations to the Rebel and Empire tech room descriptions.
- Added Rebel and Imperial pilots and an R2 unit. Can be used for missions rescuing pilots or capturing them.
- Added a lot of custom pilot images such as Wookiee, Rebel or Imperial Pilot, Boba Fett, etc. Thanks coffeesoft.
- Added multiple different Death Star 2 images for mappers who may want to use different lighting conditions.
- Changed the center reticule and lead indicator shapes.
- Added subsystems on smaller ships.
- Added more planets like Endor, Hoth, Dagobah, Yavin, etc. Thanks coffeesoft.
- Added more variety to explosions and impacts of ships and weapons.
- Added many different types of large asteroids. Thanks to fightermedic.
- Added a neutral themed soundtrack.
- Changed splash screen to something more familiar, and added a new intro movie.
- Added a DS I surface (even has a trench) and turrets for mappers to play around with. Thanks coffeesoft.

Fixes:
- Fixed music bug, now there are no error messages about ranges when loading missions.
- Fixed the missing ship icons on ships that previously did not have one and redid all the others for higher quality.
- Fixed Falcon's incorrect cockpit and Moment of Inertia issue.
- Improved escape pod textures and model. Thanks cofeesoft.
- Fixed the 'Inactive' missile slot.
- Fixed name run over in target view for shield generators.
- Fixed some spelling.
- Fixed turret hitpoint issues on larger ships.
- Fixed Warpout radius and other stuff like leave time.
- Fixed various mission crashes and ensured that there are no longer any runover missions from the MediaVPs.
- Changed subspace sound.
- Updated credits.

I've been trying to get this to work, but the only campaign it recognizes is the Freespace 2 one, and though I get the X-wing cockpit and stuff, I'm just playing FS2 with new graphics. I'm not getting a prologue or anything.

I start the game with wxLauncher, select the Mod, activate it, and I do have 3.7.2 and MediaVPS_2014, and hit play. What am I doing wrong?

You have to go to Tech Room-> Mission Simulator. At the bottom select Single mission and you will get a list of missions to select from, starting with Prologue (do forget the patch for Prologue though)).