Hello and welcome back to another update of Forgotten Hope. Today we have 2 renders and a whole bunch of in-game screenshots on the menu, but before we move on to those, we would like to welcome another new developer. Winterhilf will be helping us out by developing the singleplayer mode for our maps. Welcome Winterhilf!

On to the renders. First, we have the British Achilles (shown here with a Canadian skin). It was modeled and skinned by Agus.

The Achilles was little more than an M10 with a 17 pounder gun, rather than the standard (and much weaker) 3 inch gun. During the course of the war, some 1100 were converted, but only 125 were ready in time for D-Day. Unlike the Americans, who used their M10s as tank hunters, the British used the Achilles as mobile anti-tank gun. After a position had been taken over by infantry, the Germans would often mount an immediate counter-attack, so there would not be enough time to set up a 17 pounder artillery gun. With the Achilles, a powerful gun could be rolled into place to stop the German tanks. In this defensive role it also suffered less from its poor armour, as it nearly always got the first shot. The next render is of the German Wirbelwind (Whirlwind) and it was made by Toddel, Jodonnel and Rad.

As the Germans lost their air superiority halfway through the war, their interest in self-propelled anti-aircraft guns grew stronger. In early 1944 this resulted in the Möbelwagen, a Panzer IV with, instead of a turret, a 37mm FlaK. This design was, however, only a stopgap until a better design was developed. In May 1944, the better design first rolled out of the factory. This model was called the Wirbelwind (Whirlwind) and it was armed with a 20mm FlaKvierling. Unlike the Möbelwagen, it had a permanent 9-sided armoured 'box' around the gun to protect the crew. This 'box' was open at the top, as the gun produced too much smoke for it to be closed. Either 87 or 105 were produced (the Wehrmacht service records and factory production records list different numbers). It was eventually replaced in late 1944 by the Ostwind, which was armed with a more powerful 37mm FlaK.

Finally, we have some in-game screenshots. The two below show the Stuka-zu-Fuß firing its rockets and an American soldier taking out a StuG 40 Auf. G with his M1A1 Bazooka.

Next up, some screenshots of the Marder I.

And last, but certainly not least, the Tiger II! 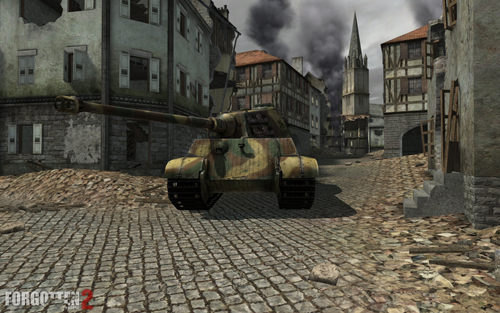 More screenshots of the Marder I, Panzer IV and Tiger II can be found on our forum. That's all for now, but be sure to come back later for another update. Until then, feel free to visit our IRC channel and our public forums to discuss this update and other news.
Comments

great work that king tiger is the biz

DICE should grant FH2 the BF2 engine for free, like UT does to it comunities.

i want this!!,
lol keep up the good work people.

Man I hate those Whirlwind's, they pwn it in Company of Heroes.

Maybe the game would be unbalanced since the Germans got King Tiger cause (as far as i know) it could easily kill a Sherman with 1 hit and the M26 Pershing also had to get in a close range before it even had a chance to hit the King Tiger. Maybe there should be some balance before putting in more heavy tanks like Sturmtiger and Jagdtpanther.

Well, I think the Sturmtiger/Jagdtiger/Jagdpanther never existed/saw combat at the time of Normandy. Anyway, if you can get the firefly or achilles round the side it'll be all over for the Tigerjockey.

Do some research on the KT you will find certain allied tanks could damage it just never frontally. Also looking at the streets it is driving down, it doesn't stand a chance against infantry ambushes.

You guys are the only reason why I have BF2 still installed. Great work!

Superb work on the map, the models and the textures... very nice...