We have been rather silent and buttoned up about progress recently, mostly because all of us have been very busy, too busy in fact to write a "Mod Explained" article or record any videos. But it is about time we give you a detailed rundown on what the team's been up to.

Greetings fans and infidels!
We have been rather silent and buttoned up about progress recently, mostly because all of us have been very busy, too busy in fact to write a "Mod Explained" article or record any videos. But it is about time we give you a detailed rundown on what the team's been up to.

A project like this - with a multi-cultural team and people working at all times - does need a stable back-end server. Earlier this year in late April we had a server crash - no worries nothing has been lost - but our trusty old version control system had been acting up since then. Due to licensing issues we were not able to update or even fix the current system and had to switch the version control system all together. Whilst sounding bad, this turned out as a catalyst for several decisions which we had been putting off earlier.

Changing the version control system (VCS) means pulling all files from the server, setting the new one up and uploading all the files again. This would have taken quite some time by itself, so we instead decided to use the opportunity to perform a major refactoring operation on the mod. Over time, the mod amassed tons of unused art assets, game objects and scripts, and instead of blindly uploading all the files to the new VCS we decided to take it slow and use the time to rebuild the mod's framework in a superior way, automate several workflows, and validate all art assets and lift them to the latest standards.

During January we decided to officially go on full feature lock-down as opposed to the soft lock we had since last September. Every gameplay mechanic that will be in the mod had to have at least a working prototype by then. Doing so allowed us to concentrate and redistribute our workforce to different new focus projects.

The Art Department is hard at work texturing models on an almost biweekly basis.The fruits of this work can be gazed upon at here on ModDB's image section.
But that's not enough, over the course of the last weeks, Burntstrobe took it upon him to create and teach a Quixel-Crash-Course and provide live support whilst texturing the Harbinger.
This way we hope to get a few more texture artists on board to speed up the texturing process even more.

In addition to the normal work of texturing and rigging, we're using the opportunity to validate and further optimize every model and particle before reuploading it to the server as several older models no longer adhere to the latest standards and budgets. 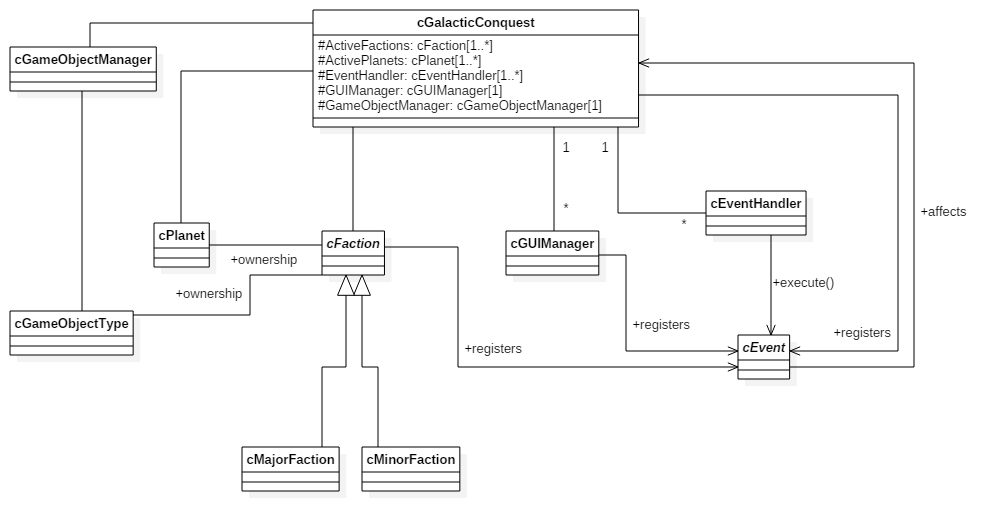 Implementing similar objects by hand is incredibly error prone, thus we've started to create several editing tools which allow for quick creation of all necessary code snippets for units, updated our internal build tools to be more user friendly, and created a new editor which allows for easy updating and editing of the galaxy map.
Usually these tools are for internal use only due to their very task specific nature targeted at our mod, but sometimes - as in case of the Planet Placement Tool - we will release them to the public: You can download the planet placement tool here on ModDB. 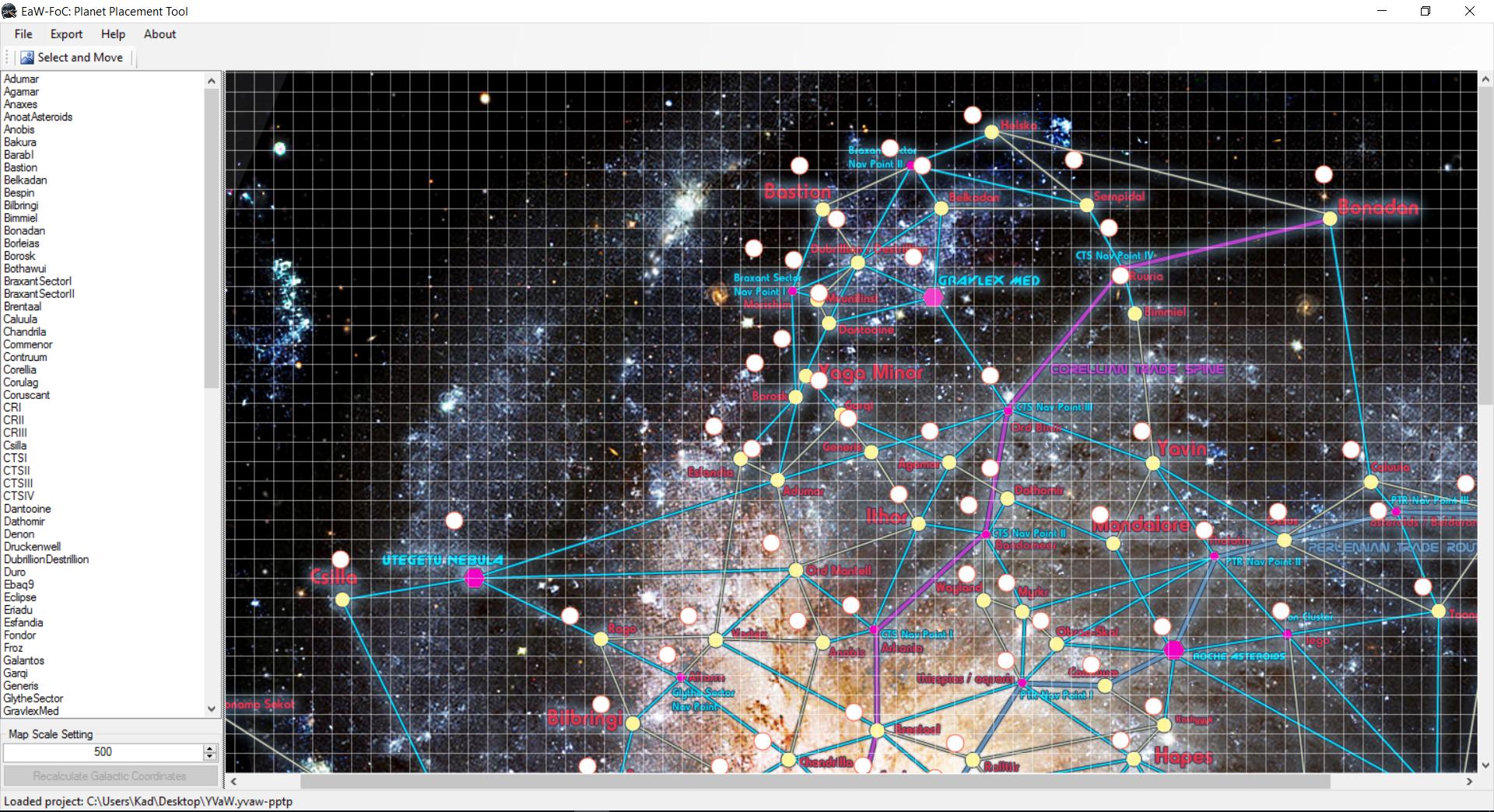 With all features and mechanics prototyped and working as intended, we started combining the features in early February just to notice that whilst working, some feature integrations would prove unstable or unreliable in a finished product. This simple fact called for a well planned and unified framework for the mod. After the initial planning phase the production started early May and is now almost finished:

All new features present in earlier builds are being migrated as events. Interestingly enough this framework is reusable for any kind of EaW mod.

In parallel to the framework, we've started reimplementing all needed edits from the legacy version in a streamlined manner, enforcing several new coding rules and naming conventions, as well as updating older versions of game-systems to newer iterations. This is even more streamlined by the revisited build tool and new unit creation tool.

Whilst artists and coders are hard at work, other creative minds are tackling the sheer impossibility of balancing an inherently imbalanced universe. Hours are being spent on creating formulas to streamline armour ratings, shield strengths, energy ratings and damage tables.
In addition to that all notable events during the Vong War are being revisited, checked whether they can be turned into an interesting mission or whether they should be told by other means. If they can be turned into an interesting and fun mission, such a mission is drafted, planned and outlined for an easy implementation of map and scripting.

Visions of the Future

It has been an open secret ever since we've published our FAQ article that we in fact have an internal release schedule. Up until recently this schedule was somewhat flexible, but due to recent events in some member's personal lives it had to be set in stone. In other words:

We have a set release window! The end of this journey is nigh!

Whilst we will not announce a date as of yet, the first full version of Yuuzhan Vong at War is going to be released in 2018.

Release and Future of the Mod

With the first release next year, we'll start the initial patch cycle which will depend entirely on how many bugs slip through our QA testing.
Whilst everyone wants and works for a bug-free and polished release, we'd be stupid to assume that there won't be bugs which we'll have to fix. But after that initial patch cycle has ended we'll start working on additional content packs. These content packs will all center around further enhancing certain parts of the mod. For example a map pack increasing the fidelity of space maps or trade ports with new background props, or a unit addon for a faction, and so on.

With the release drawing closer, we'll also focus on you - our fans - more than the odd discussion in a comment section.
We encourage you to delve into our forums and have a good time there, or if a forum is too old-fashioned we also have a discord server where you can hang around and chat with fellow EaW-fans, mod makers and the YVaW team.

In addition to that, you can look forward to some more video content coming up until release, we have a lot of plans in this regard, we - for example - really want to find out how certain ships perform under battle conditions - who wouldn't want to see how a whale tries to eat a dagger? There is also still some content left to show regarding Project: Planet Death, and many more smaller or larger teasers or events are planned (Don't we all love seeing the Rebels fight the Imperials?), but those will be announced in due time.

We could use people who are willing to help with texturing and rigging units.
It's not the first time we're asking for help in this department, and it's not the first time people answered the call.
We're willing to teach you everything you need to know, but please be aware that modding is hard work at times, learning how to texture or rig takes effort and a little time, but it pays back when you see your creation in action and play what you've built.

So if you want to help out, first ask yourself if you are actually willing to devote that kind of effort, if the answer to that is a "Yes", and the first altruistic impulse has not already worn off, then contact one of the team members via PM or post on our forums.

As always, a great many thanks to all of our fans, who are supporting us and have shown an incredible patience we do not plan on testing much longer.
Thanks to all the tireless people behind the scenes, who are either part of the team, but keep quiet in public, or are helping us out whenever we need them!

So, yet again: "That's all folks!"
The Shapers - Team Yuuzhan Vong at War

Pretty dank if I say so myself.

Best of luck in this grand endeavor boys! Don't let nothing get you down!

Keep up the great work, you are doing a amazing work!

You're doing amazing given the obscenely ambitious scale of this project. I patiently await more from you.

Check out our discord server, we showcase wip screenshots, developer journals, in-depth question/answers and soon will be featuring more interactive events to form an even stronger community with our fans as we prepare for our 1st release.

We welcome discussions, hypothetical technical debates and everything Star Wars Expanded Universe, come join the fun, we would love to hear from you!

Very excited about the release news. Keep up the good work.

You guys sound like a pretty professional team! Can't wait!