Our latest Kickstarter update. This one covers the huge list of changes made to the Kickstarter Early Access build. Nearly all of these changes have been made thanks to backers feedback from their exclusive access build.

Howdy folks! It's been a month (and a few extra days) since our last Kickstarter update, and that means it's time to get you all up-to-date on the latest developments for BUCK! 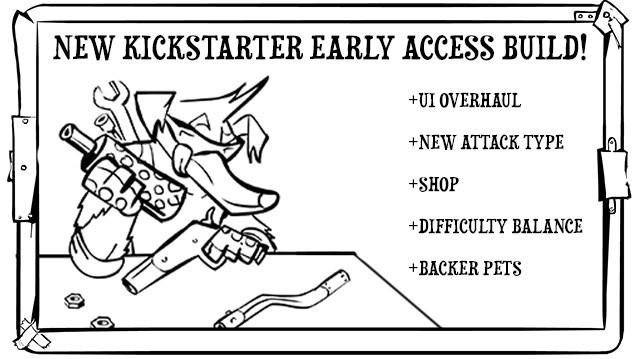 And lots more!Kickstarter Early Access Build Changes:As with every update for BUCK's Kickstarter Backer Early Access build, we try to focus on a few specific systems as we improve the core gameplay experience instead of adding new levels just for the sake of it. So while this update doesn't bring a new level into the game, it will provide you with some major improvements to controls, combat, difficulty, dialogues and UI.

(Note: the full patch notes can be found here. We're discussing the biggest and most relevant changes in this update.).

As some of you stated in our forums, the text prompts that appear in-game for all of Buck's interactions with the world seem a tad out of place. As you can imagine, yes, they were indeed placeholders from the very beginning and were long overdue for a change. That’s how indie development goes!

From now on any potential in-game interaction will be highlighted by the following icons:

We've also added a “fade in & out" effect to make interactions easier for players to spot during gaming sessions. 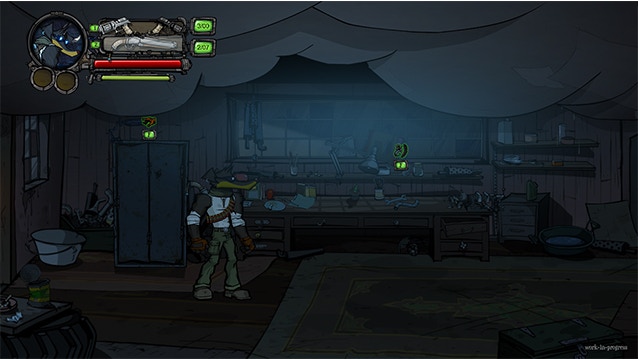 Whenever Grit narrates, a black and white shader will take over the entire screen. This was made to enhance the Film Noir experience in BUCK, taking it one step closer to the sources for our inspiration. As you can see, Grit's icon on the bottom right has also been changed. 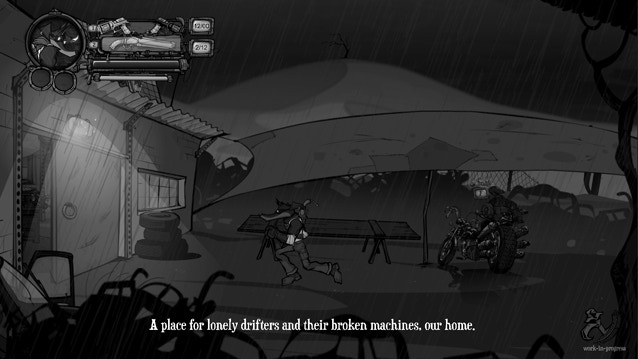 We might tweak the effect further down the line

All in-game tips that display at the beginning of the game have been updated to show controller key-bindings as well. Since the tutorial for the game is relatively short, we've added a new button to the pause menu called "Tips and Combos" - this will take you to a new screen that will show you all of the tips that have previously shared by the game, default key bindings for controllers or keyboards and several pages that display all available combos for you to learn. 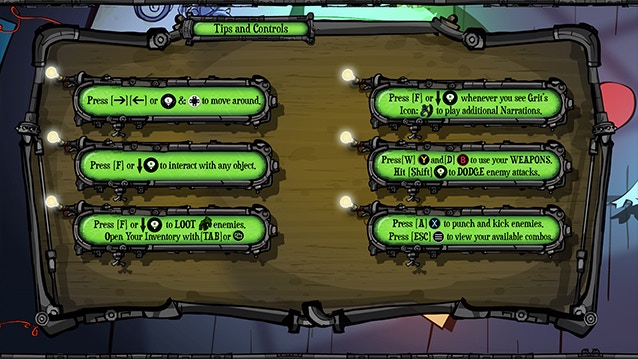 We've decided to focus on improving the barrier of entry for the game. Thanks to the feedback from the many backers who are chatting with us on our Discord server, who explained that the game might be a tad too hard, we’ve adjusted things accordingly. On top of their feedback, we’ve also taken into consideration new player feedback from the conventions we talked about in our previous update where Buck was demoed.

We've decided to implement Buck's weapon locker at his home. It looks cooler in there, but it won't serve any gameplay purpose at the moment – remember that Buck's arsenal is still limited to his two primary weapons! In the near future new weapons and items will make their way into the game, alongside a major change to how Buck receives his weapon. The game will eventually start with Buck carrying a single weapon: the double-barreled shotgun. The Pistols will be unlocked further down the line, along with all the other weapons that will be introduced into the mix.

We want to test and see if the weapon locker UI is working correctly and would love to hear your feedback about how we can improve it! That way when additional weapons are added, the Locker UI system will be fully prepared. 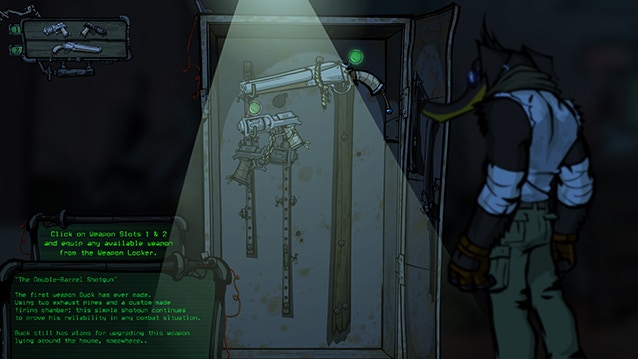 Eventually, Buck's attacks will be influenced by your weapon loadout. So choosing what weapons you carry will drastically change Buck's attacks.

To see the full list of UI changes and improvements on our Forums.

While lowering the barrier of entry into the game with UI improvements we've also taken the time to adjust the Oldtown Levels to be more forgiving. Enemy placement and enemy types have been switched around to bring a softer and more constant difficulty spike. However, all other levels currently remain unaffected.

Some enemy attacks have been weakened but, as a trade-off, nearly all enemies have received a substantial buff to their health pools.

Oh, and did we mention that most enemies can now be knocked-up into the air? give it a shot and tell us how it feels!

Buck's combos should also feel easier to execute, both on keyboard and with a controller input. We've had some issues with attacks that require inputs like "UP" and "DOWN" before, but it should no longer be an issue after the latest update.

Nibbler's shop will finally make it into the game! As is the case with the Weapon Locker System, we want to test and see how this new addition feels for those of you playing the game before we move forward with including additional levels. The build still ends after reaching Nibbler, but you'll be able browse the shop and trade items! 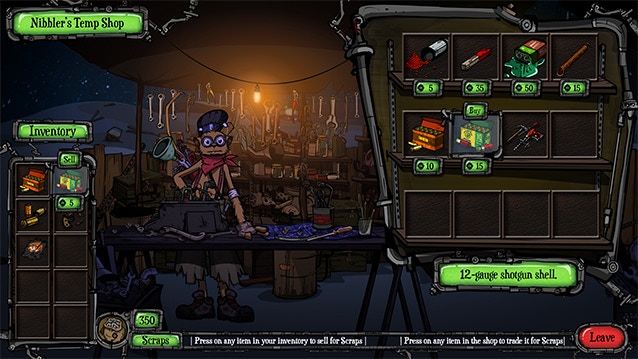 The next build will make substantial use of the shop, we want to make sure it works correctly.

Some dialogue will slowly see some change throughout this build - starting with Mug's which have been re-written to allow for more player interaction. We're aiming to slowly update more of the dialogue down the road to have less "listening" and more interactions for players.

This patch changes and updates much of the core experience of the game. We hope that both those of you who finished the build or who tried and failed because of the difficulty will give BUCK another shot. We aim to improve the game as we go, and your feedback is a very important part of the process!

Implementing your pets into the game is an absolute joy – it has perhaps been one of the most rewarding design experiences we've hard while working on BUCK! Over 60% of all in-game pet-posters have been made, which means that 40% of you still haven't sent us your pet's pictures! We're doing everything we can to maintain our development on schedule and we need to have all of your pet images in order to have enough time to implement them in the game.

If you've sent something our way and haven't received a reply, please contact us immediately here on Kickstarter so that we can make sure we have the time we need to implement your pets into the game.

Can you spot all the posters currently implemented? Here’s a look at some of them: 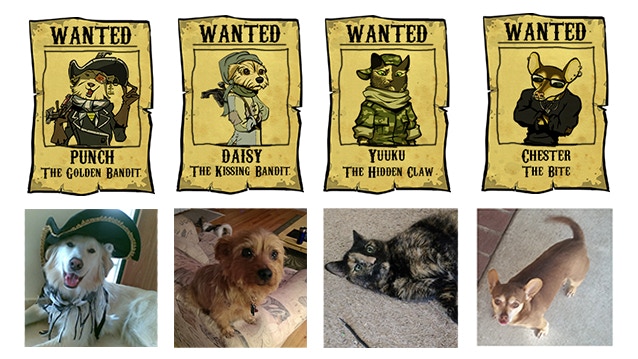 We've received emails from plenty of gamers who want to support our game by pre-ordering for its Early Access version on Steam. If you have any friends who might be interested and who want to show their support for our studio, the link to our Pre-Orders can be found here on our website. Don't forget to direct them to our demo on Steam as well!

We continue to press forward as the last major system is being worked on alongside other adjacent systems - namely the Weapon Customization System. Our goal is to release the system around the time we do our January 2017 update – this is roughly a little over a month and a half before BUCK Reaches Steam Early Access! We can't express enough how vital your feedback is. The more you play and help us work out the bugs, the better of a launch experience BUCK will have during its Early Access debut.