The development has made so huge progress, the game is almost done and close to be released ! 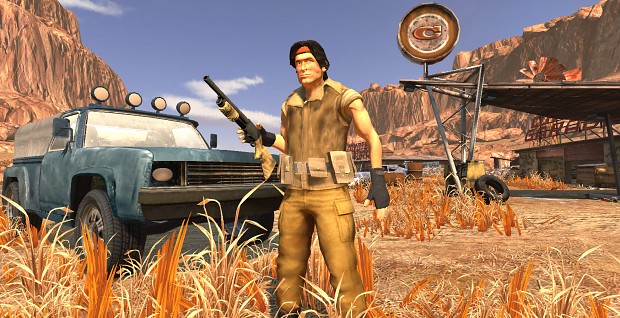 Time to get some petrol cans!

These last weeks, after being done with the trailer and the improvement of the graphics, I have finally started to work again on the game itself. I have managed to make some huge progress and I am now closer than ever to release a playable version of the game !

After finishing the map, the aliens, the weapons, the wave spawning system, the musics, the sounds, the items on the map you can grab, the HUD, etc... I am now polishing the game and here are quickly some features I have been working on : 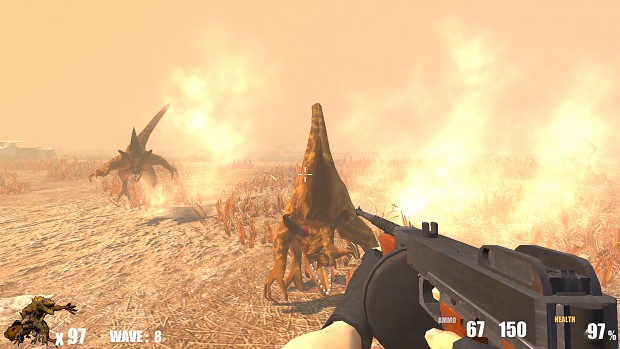 The smog which appears the more you progress through the game, it is greatly enhancing the transition of atmosphere from the sunny day of the beginning to the desert storm of the end ! 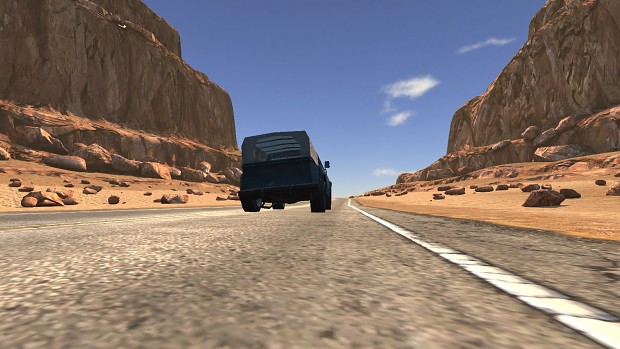 All cinematic of the game, from the introduction to the ending ! 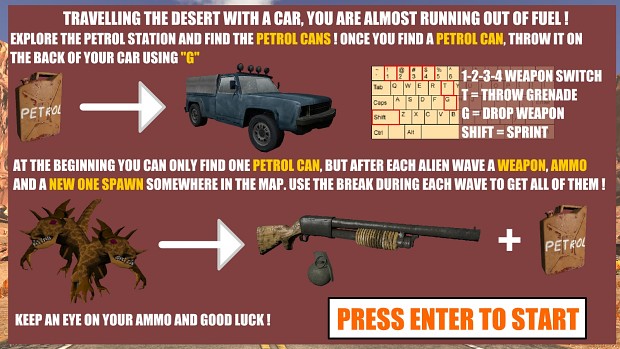 I have added a simple help screen at the beginning so you can quickly have an idea of the goals even if you don't know the game. 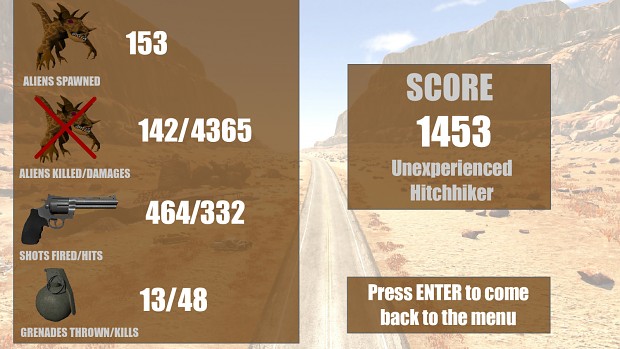 And at the end of each game a score screen where you can have some stats about your playing skill and also a "rank" depending of the score you get, if you have any idea of funny ranks feel free to tell me about! 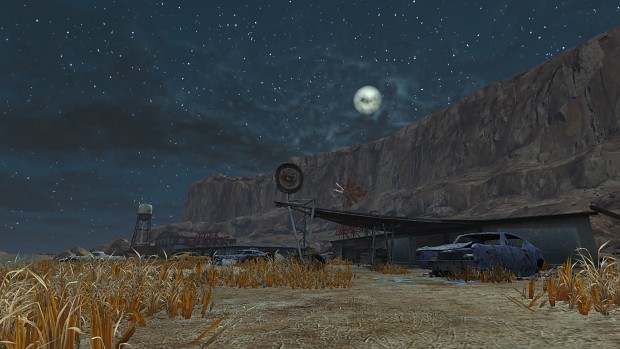 I though it would be cool that once you finish the game, you can try a "realism mode" where the map is set during the night and you have no HUD nor crosshair ! 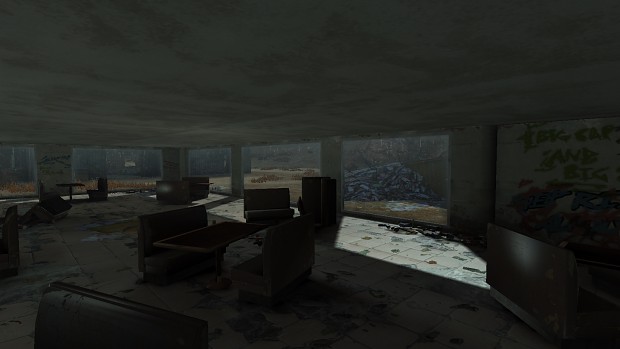 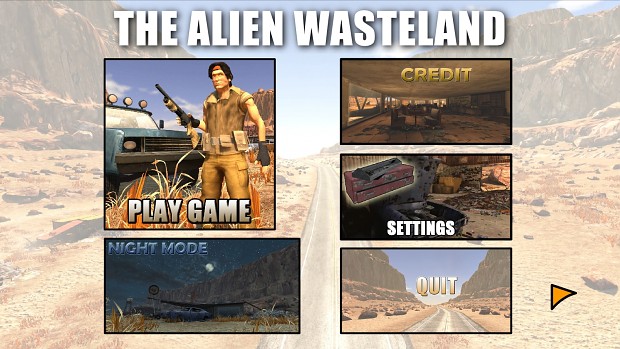 One obviously important feature was making the menu. 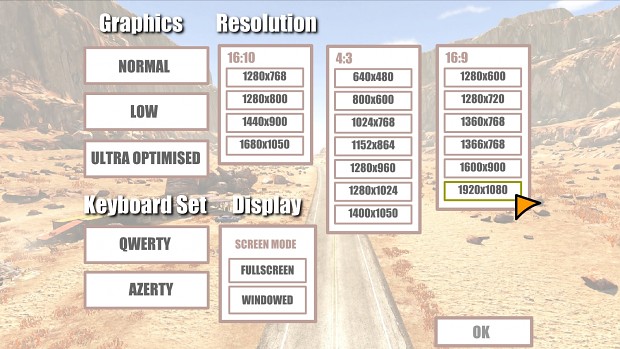 Also the config menu which took me quite some time to make it fully working. 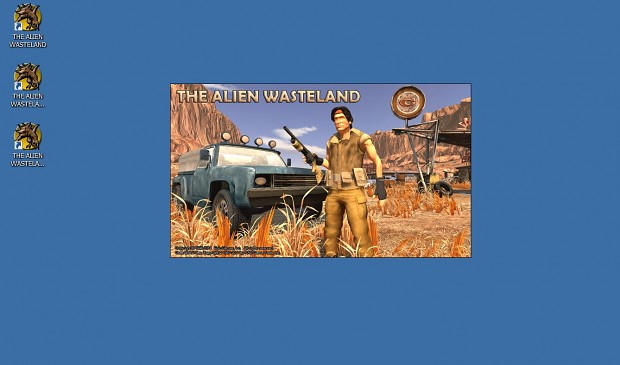 Finally, here is how the game will appears during the startup !

And so ! The game being almost done, there is actually only voice acting for the character that still left. After that, it will be all about polishing the game, finding and fixing bugs and packaging !

While UDK has already a packager that creates an installation of the game, I would prefer to have a custom one made with Nullsoft or Inno Setup.

I also decided that I may not put any kind of DRM or serial numbers for the game, because I have been a player and I know how annoying it is, especially toward legit players ! My goal is before all to have this game being played by as much people as possible, and if possible to have some revenue of it.

And about that, I am very happy to announce that the game has been greenlit on Steam ! Big thanks to everyone who voted ! I will now be able to release The Alien Wasteland at Steam, Desura and on the homepage !

So this will be all, I really hope the next news will be about the release !

Don't miss the release of the game, subscribe !
Comments

What a terrible game.

Ehem... I'll be glad if you could tell me what have you found to be so terrible.

Don't mind him, and his bad comment above Devdan.
He only has seen a few screens, so how can he say its bad.
Just silly. Its clear you have been working hard, and i can't wait to play this game. It looks great as i said before and i love games like these.
So, please continu and we will wait till your done,

Thanks, I'm doing my best to create a cool and entertaining game and everyone will see if I succeeded once I get it released !

Being an FPS a FOV slider is a must.

you should be quoted in bible!

I remember the last time I tried tweaking the FOV with UDK I had some glitches like muzzle flash not being properly aligned or some parts of the arms and the weapon not being displayed.

But it's actually an easy feature to implement, I will try adding it to the settings menu !

If its the UDK, you should be able to tweak pretty much everything, have a look at renegade x for a good example of what an options menu should have, these things matter :)