A new open-source YR engine extension for every YR modder to use and contribute to.

We're pleased to announce Phobos 0.1, a first stable release of Phobos, a new YR engine extension that is meant to accompany Ares (it doesn't replace or depend on it). It is made by Kerbiter (that's me, hello; you might know me by my contributions to XNA CnCNet client, VXLSE, my C&C Mod Haven server or something else) and Gluk-v48 (might know him by some features in Ares like advanced rubble).

Partially this project was started because latest Ares versions are closed-source. We respect AlexB's choices, but personally might not agree that's the best decision. According to our vision Phobos is a community project first of all (you can read how to contribute here; everyone who helped the project is listed in the credits) and is licensed under LGPL v3. Among everything that means it or it's derivatives have to stay open-source in order to comply with the license.

But enough with the boring stuff, time for some goodies :)

It all first started when Gluk wanted to implement a few warheads for RA2: Reborn mod and that's what were the first things to be done in Phobos - the three new warheads: TransactMoney warhead (increases/decreases owner's credits), SpySat warhead (reveals map for it's owner), BigGap warhead (shrouds all map for enemies of it's owner). The first one in particular allows to replicate Hackers from Generals.

Hackers from Rise of the East

The building upgrade logic felt lacking for me, so I made it possible to apply building upgrades on your ally's and even enemy's building, and Gluk then expanded it with an ability to specify multiple buildings to upgrade. 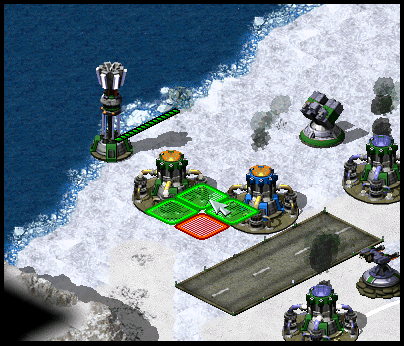 Another thing that was previously hardcoded - you can now have a custom per-weapon disk laser weapon radius!

HP bars can now be hidden, so your hacks that involve dummy units and structures are as smooth as ever ;) 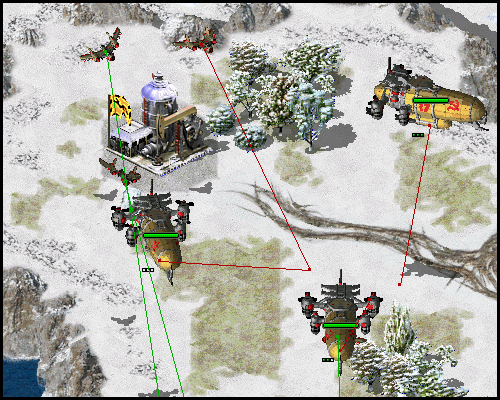 Another player-oriented feature - selection priority filtering mechanic similiar to the one from newer RTS games (you can make, for example, harvesters won't select when you drag-select battle units with a box).

Priority unit selection in Rise of the East

And now the feature many mod players would say "thanks" for... Extended sidebar tooltips! That's right, you can now have descriptions for any building, unit or superweapon. Right now it's limited to cost, power consumption/generation, recharge time for superweapons and description. You can even customize the labels used.

Last but not least, every PCX that is loaded by the game or made to be loaded with Ares or whatever now can be full-color, so no more ztyping with palettes! Oh, while we're at it - loading screens can now be PCX too, just be sure to use respective tag from Ares to specify a loadscreen. If your mod uses CnCNet5 - then those loadscreen images are no longer limited to 800x600, you can make them bigger and they would be cropped on smaller resolutions.

You can check all respective tags and read about other features in the official Phobos wiki. If you want to talk with us - check this channel at C&C Mod Haven Discord. If you don't want to use Discord - GitHub and PPM thread are your friends.

We welcome everyone to try his/her hand at implementing the features they'd want to see in YR, just contact us so we can help and check the issues board.