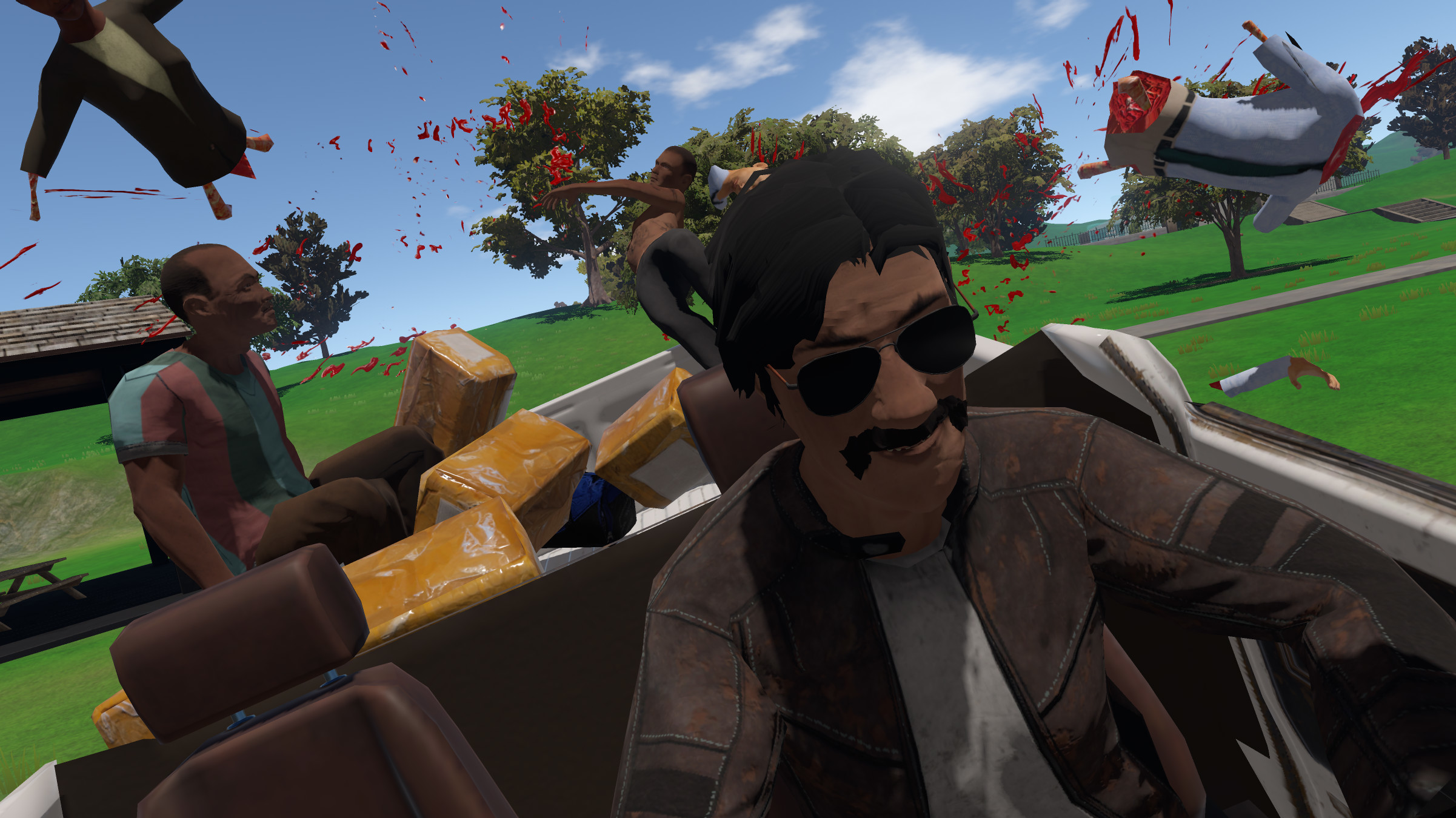 This update brings Guts and Glory a big step closer to being finished. Major performance improvements, a new character, and tons of new level creation content—just in time for making holiday levels too! 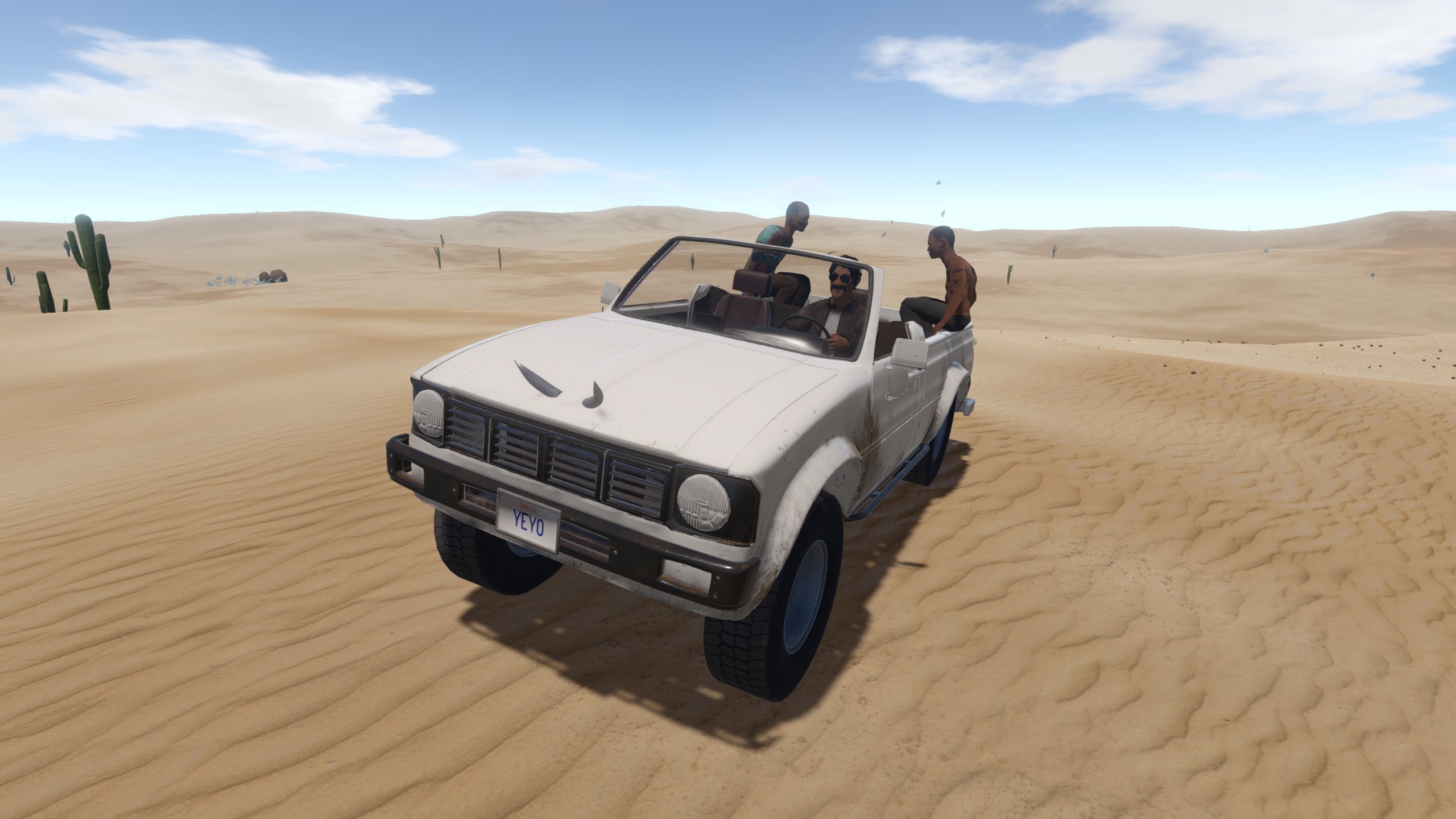 Last month, you guys voted on your favorite version of Pedro and here he is! Pedro Sanchez is one of the finest getaway drivers for the Mexican Cartel. His reckless attitude and manly mustache makes him the envy of men and the desire of women.

Pedro’s truck “El Toro” has a faster acceleration and higher suspension than the Yang’s car. It can also sustain more damage. However, it has a lower top speed and is much harder to drift (use the emergency brake at high speed).

The Voice of Pedro

In a future update, Pedro will be voiced by the legendary UberHaxorNova!
Coincidentally, he also did the voice for “Pogo Stick Guy” in Happy Wheels.

For now, however, Pedro is mute. 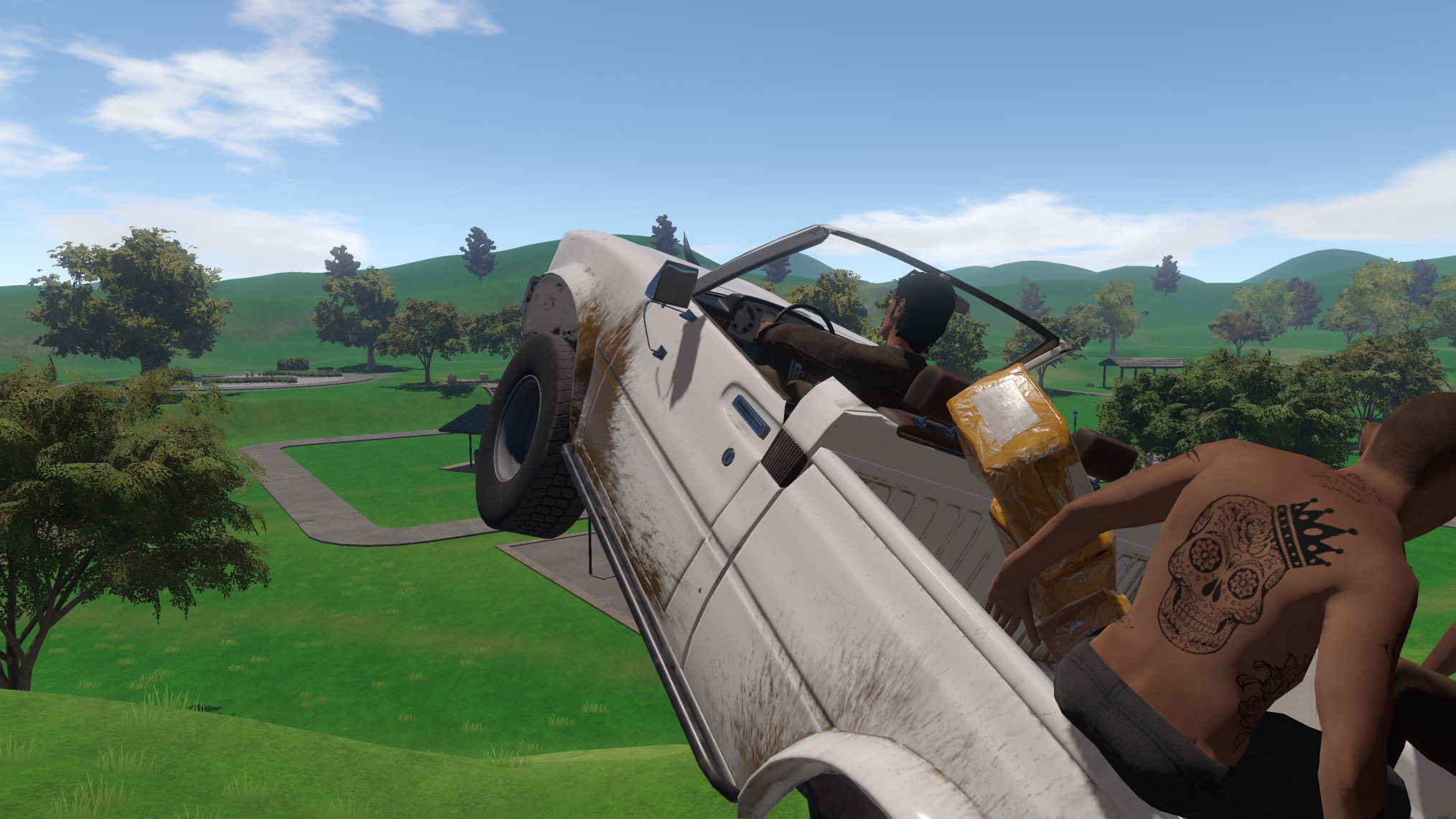 I was finally able to add this long-requested feature and make it work with the “smart cam.” It may need a little more polish, so as usual your feedback is welcome.

Controller: Use right stick. Hold between 0-50% to maintain view angle.

This finally allows for more vertical level designs to work, and makes it easier to see where those poor passengers end up.

Now you can pause the game and view the destruction from any angle! Easily rotate around objects in a Matrix-like fashion, or fly around the scene and view anything you wish.

When you’re near objects, the camera will rotate around them. When you move the camera away, it can be steered as if you’re flying the camera around the scene. 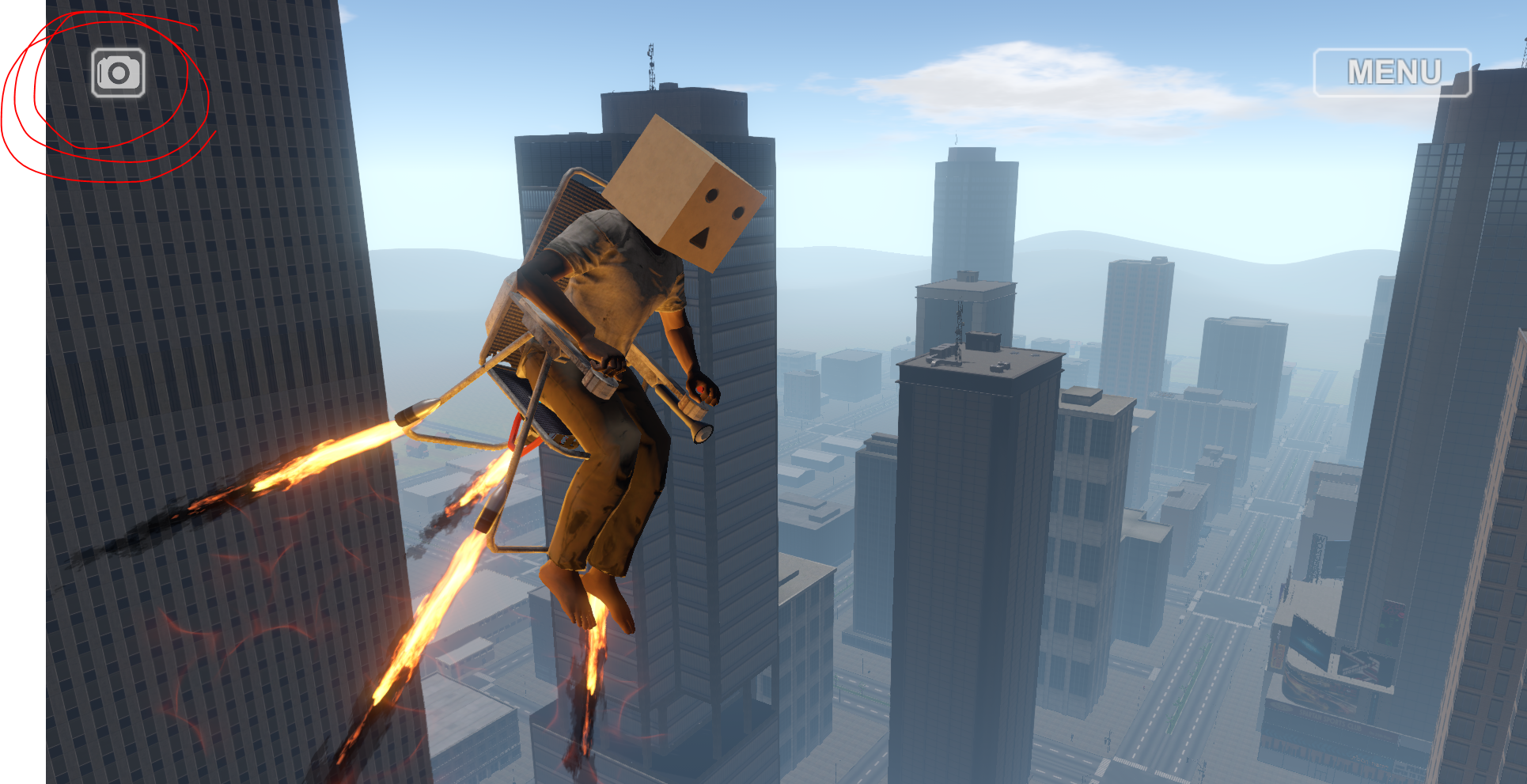 Want to share a glorious moment or capture a great video thumbnail? Now it’s easier than ever!

Just click the Camera Icon on the pause screen and it will save a screenshot to your documents folder with all UI removed. 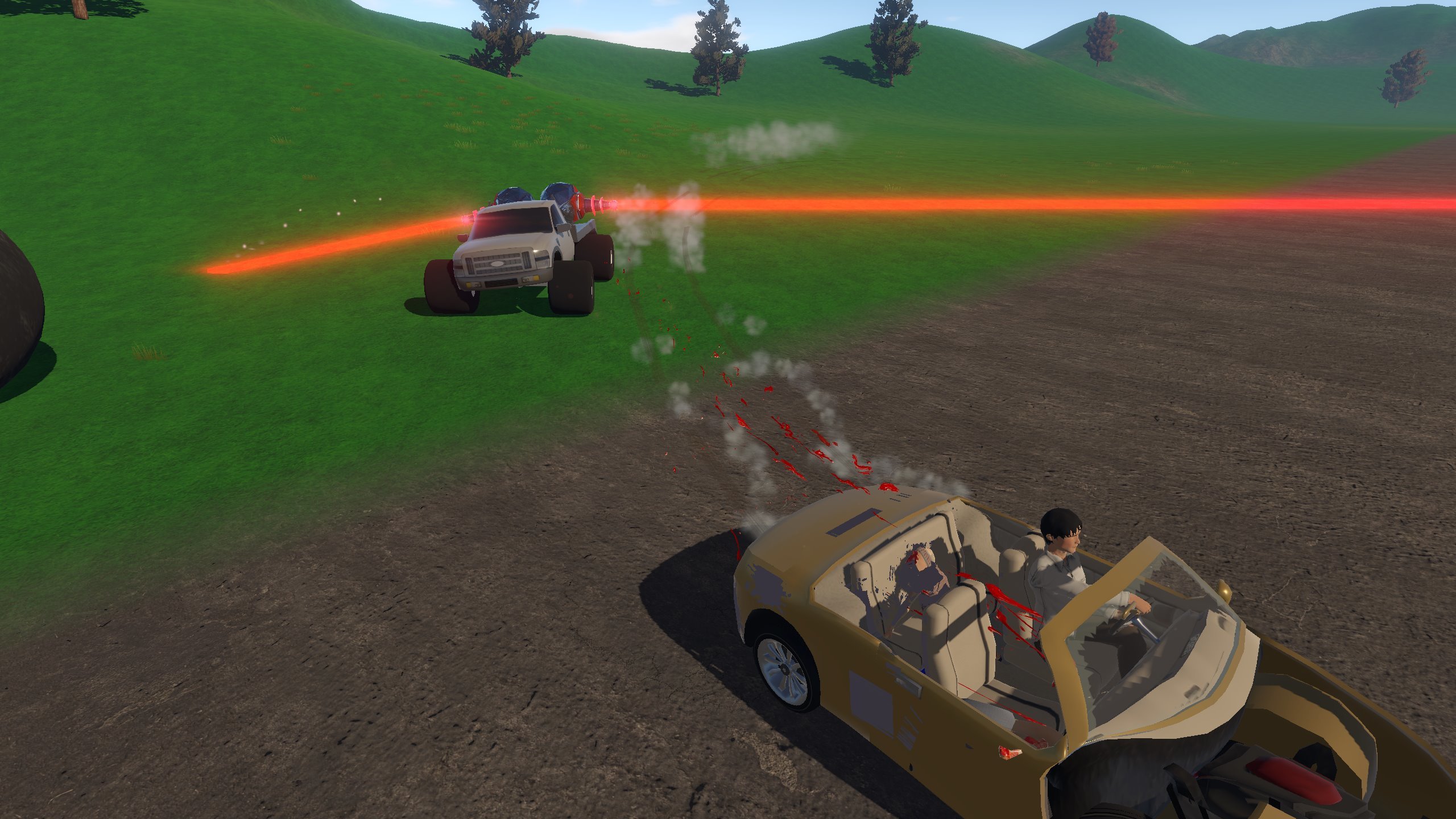 Tons of new stuff for all you Level Creators out there

Now you can edit lots of objects at the same time!

This feature was tricky to implement, but totally worth it. It makes level building so much faster and enjoyable. 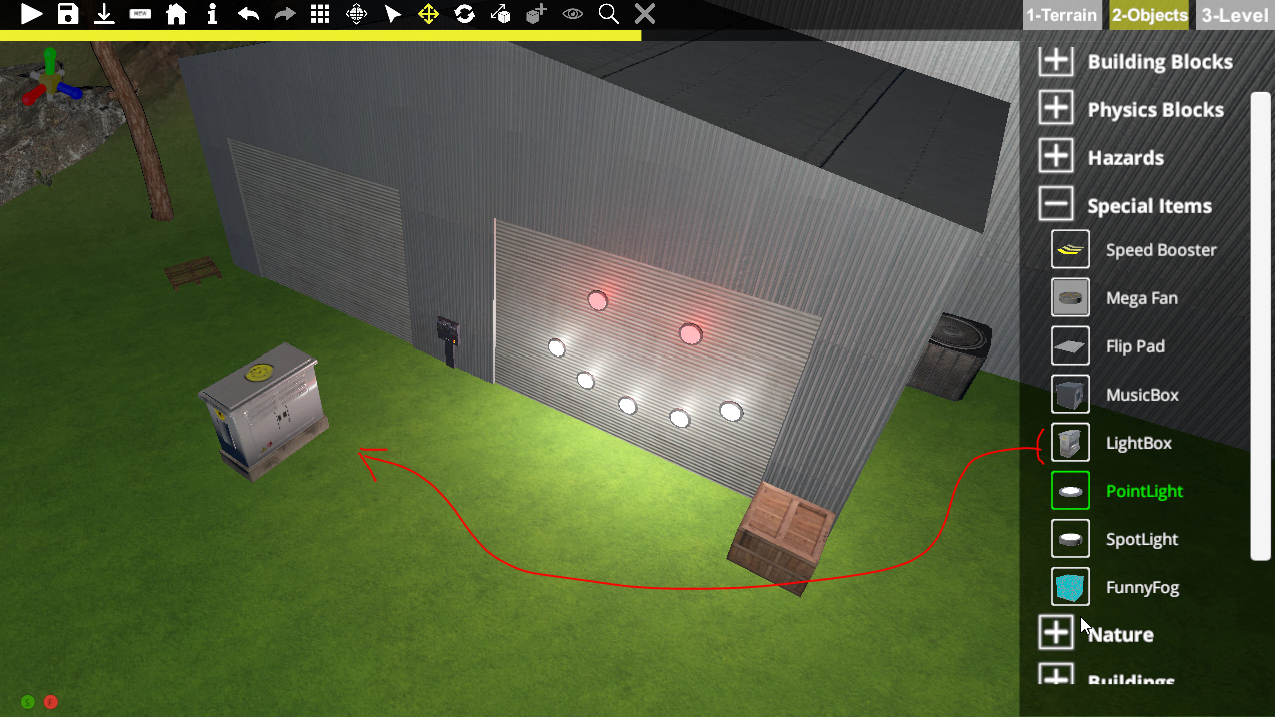 Just drag-and-drop this item anywhere in your scene and select a preset to adjust the overall lighting and atmosphere.

If you make any dark levels, it’s highly recommended that you add some lights too.

Good lighting can make a mediocre scene look great! Just drag-and-drop them into your scene and select a color option. They’ll activate automatically if the level is dark enough.

Point Lights cast light in a radius around them. They’re perfect for general lighting needs.

Spot Lights project a circle of light in one direction. Rotate them to get the effect you need.

I added a visible trigger radius to the MusicBox when in the Level Editor. Add MusicBoxes along the track to change the music/mood during a track.

Auto-Play: If only 1 MusicBox is in the level, it will now auto-play no matter where it’s placed (no triggering needed). 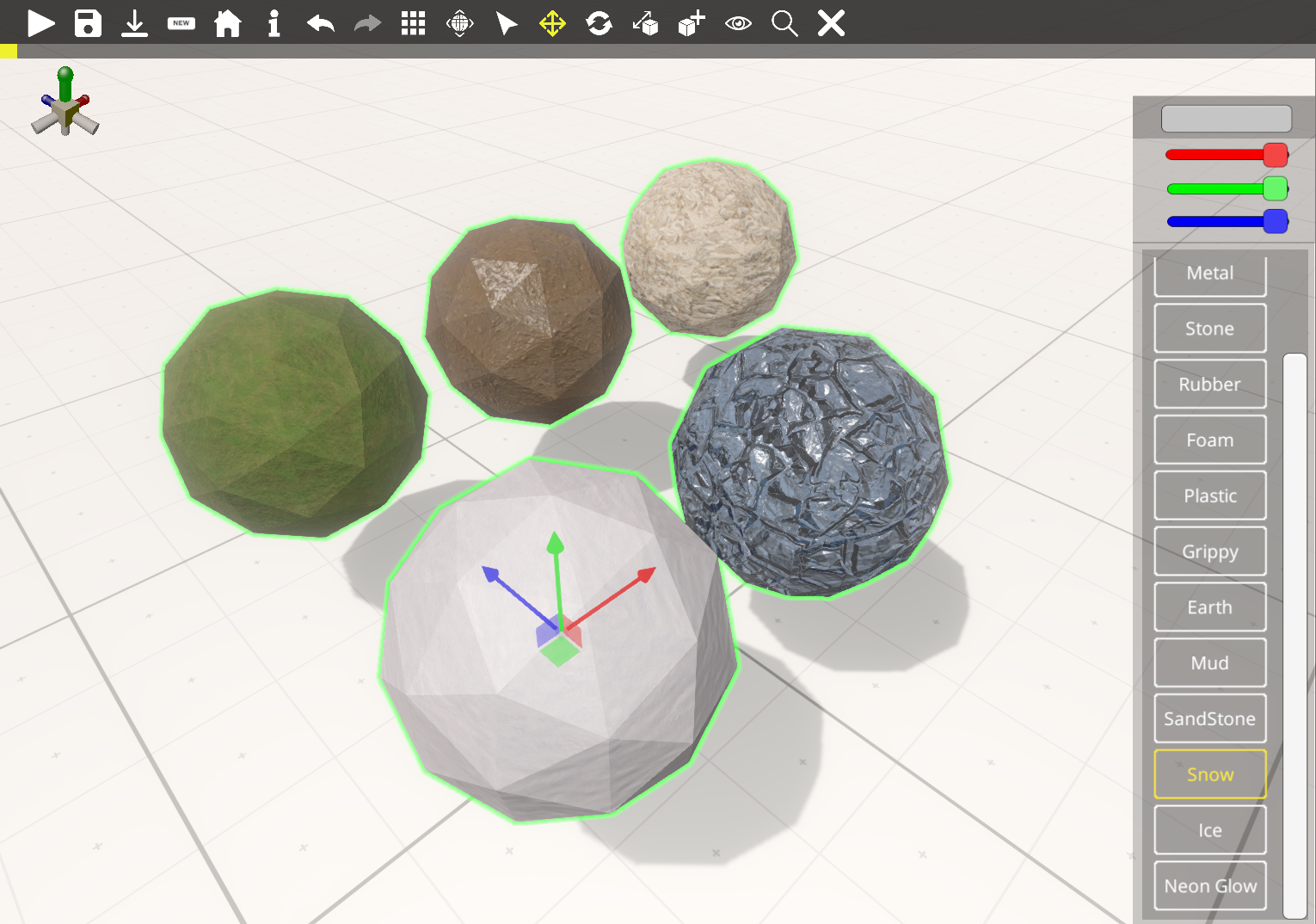 These are just some of the new items you can find in the Level Editor.

Causes instant death if any part of the driver touches it.

Instantly eats away any portion of any character that touches it.

Useful when you want to create smaller, custom hazards.

Each time a character passes through this volume it makes their head grow larger. xD 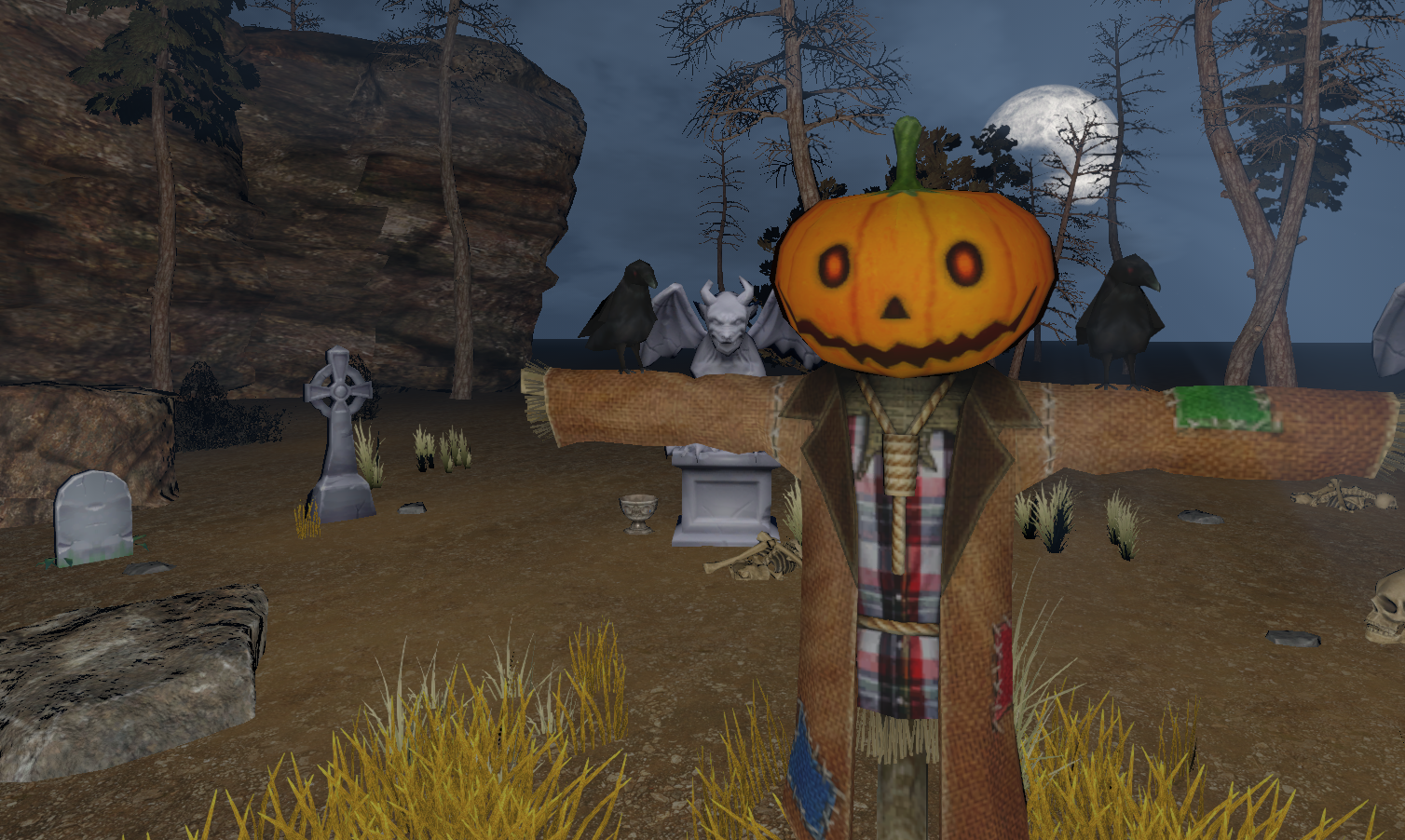 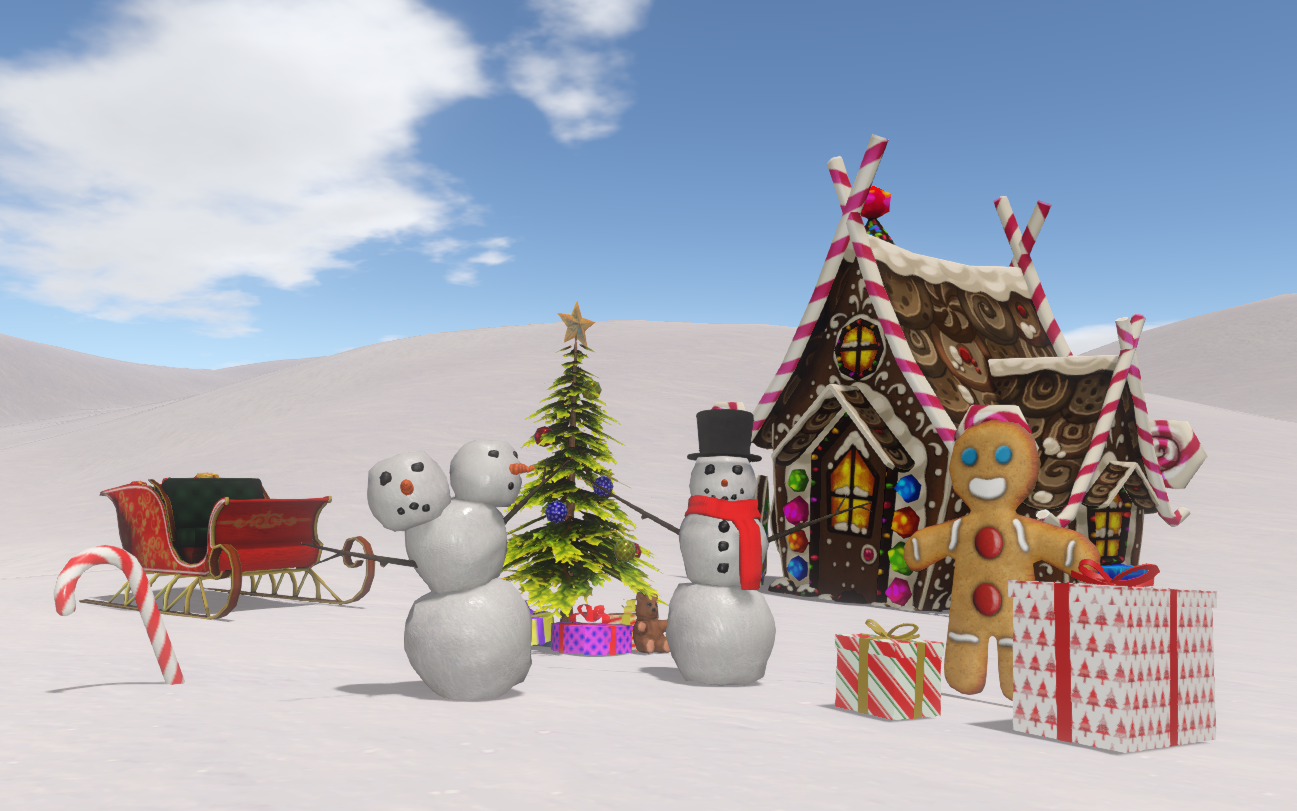 A bunch of holiday-themed props, including Halloween and Christmas stuff. 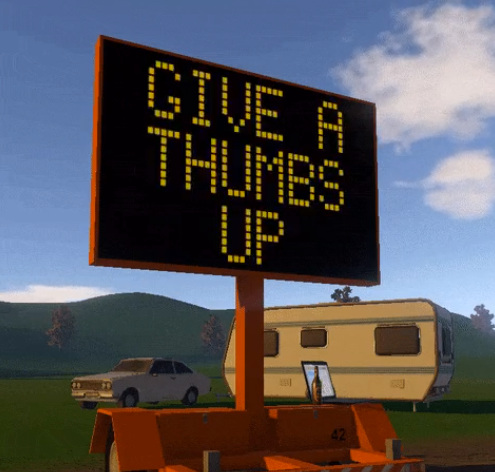 An electronic road sign with a ton of different message options. (Thanks everyone who tweeted me ideas for this!)

Several new prop vehicles to decorate the track / use for obstacles. Ranging from small to large.

New Material options for Rocks (desert, snow, etc.), assorted Grasses, and even Cactuses. (Yes, the cactus spikes can hurt you!)

Cardboard cut-out type characters that you can use to quickly make background audiences and on-lookers… or whatever you want.

Easily add a cheering crowd to your levels for extra glory. Great for adding some background ambience to your custom tracks. 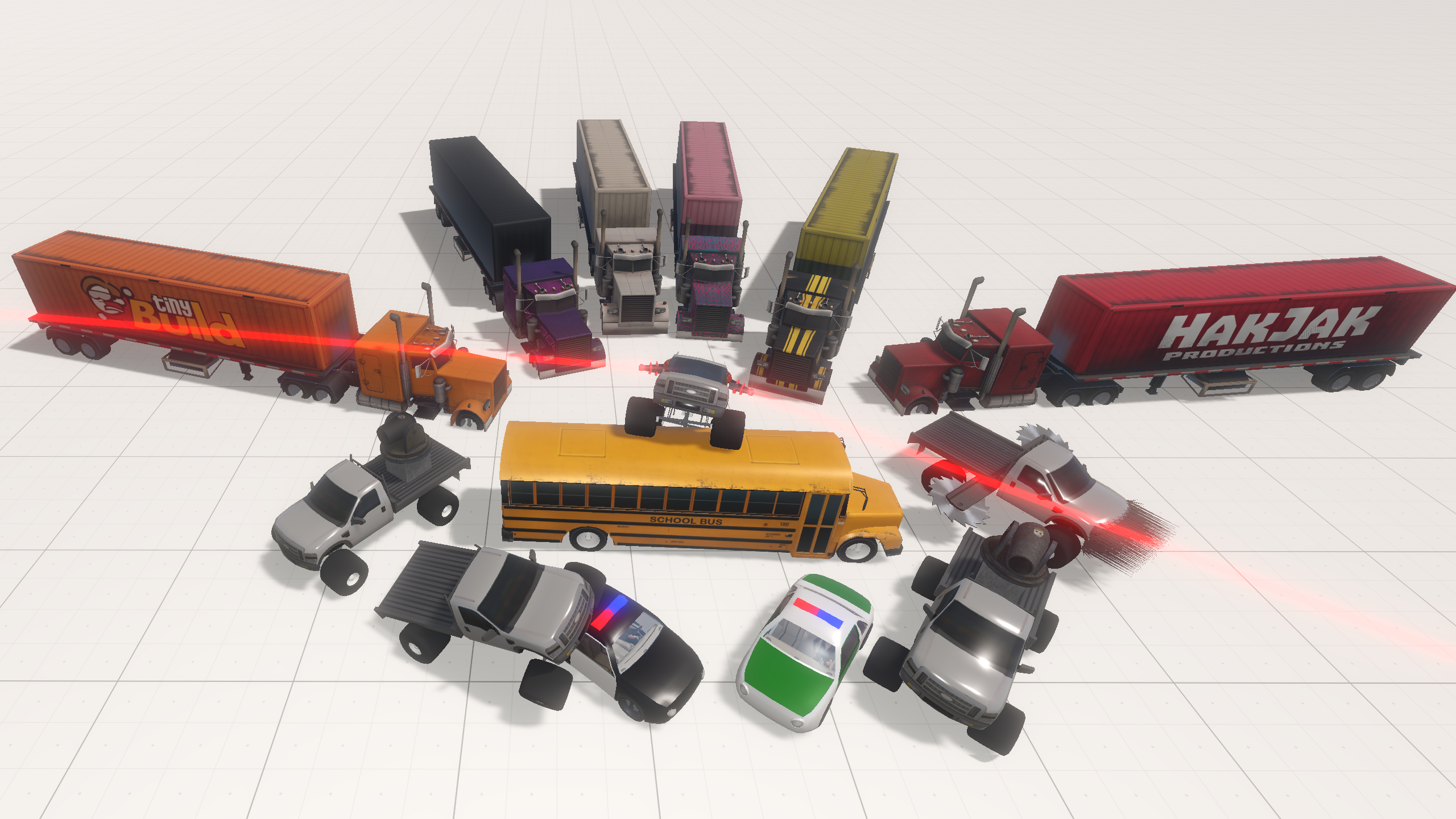 The standard AI Cars have been upgraded! They now have an interior, transparent windows, lights, and even a driver!

Can also be equipped with Hazards, such as Lasers, Cannons, or Mad Max style spikes and saws!

Create your own “Clustertruck” inspired levels or just add some very dangerous traffic. Careful waypoint placement and speed settings are key for getting smooth driving out of these due to their large size and towed trailers.

The version that’s been drinking too much egg nog…. 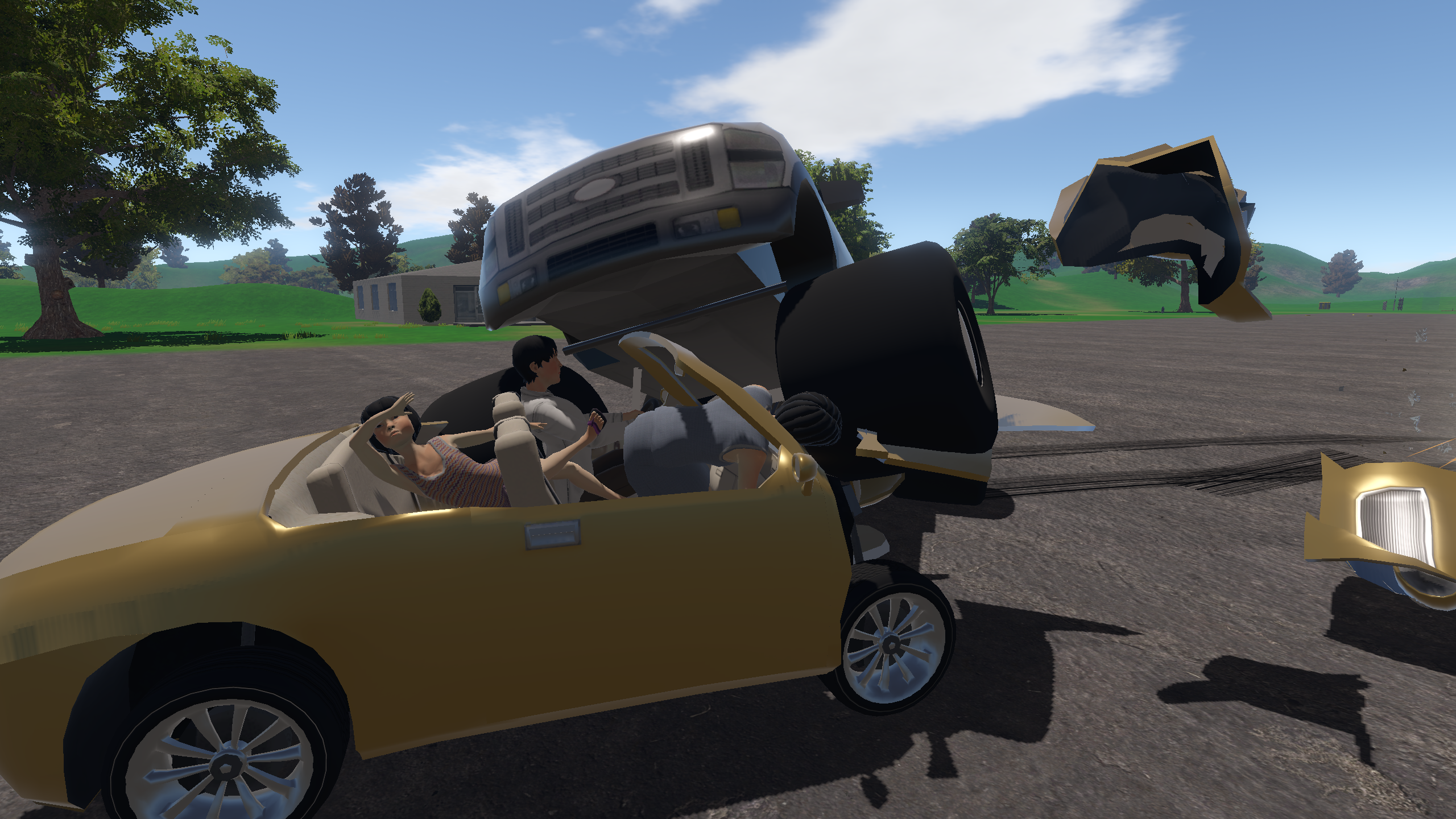 Experimented with Community Track “level streaming” but it is far too buggy at this time. Will try again before final build, probably in the Beta branch.

NOTE: This is a major change to the build that affects nearly every part of the application. If you have any troubles with the upgrade, simply do a full un-install and re-install of the game on Steam. (All 3 of my test machines upgraded smoothly, but YMMV.)

The “rainbow screen” / “texture glitch” rendering errors on Macs should be fixed, unless your computer is below minimum required specs.

As I worked on this update, I noticed that the work needed to be divided between Level Editor content and everything else. Since Level Editor stuff takes longer to debug and get feedback on, I decided to focus primarily on that aspect for this update.

I also wanted to make sure content was out ASAP for Holiday levels.

As Guts and Glory gets closer to completion, optimization and polish is becoming a higher priority. This update should give the game a massive performance overhaul and make level creation faster and more fun than ever.

I’d love to hear what you think about the game after this update! 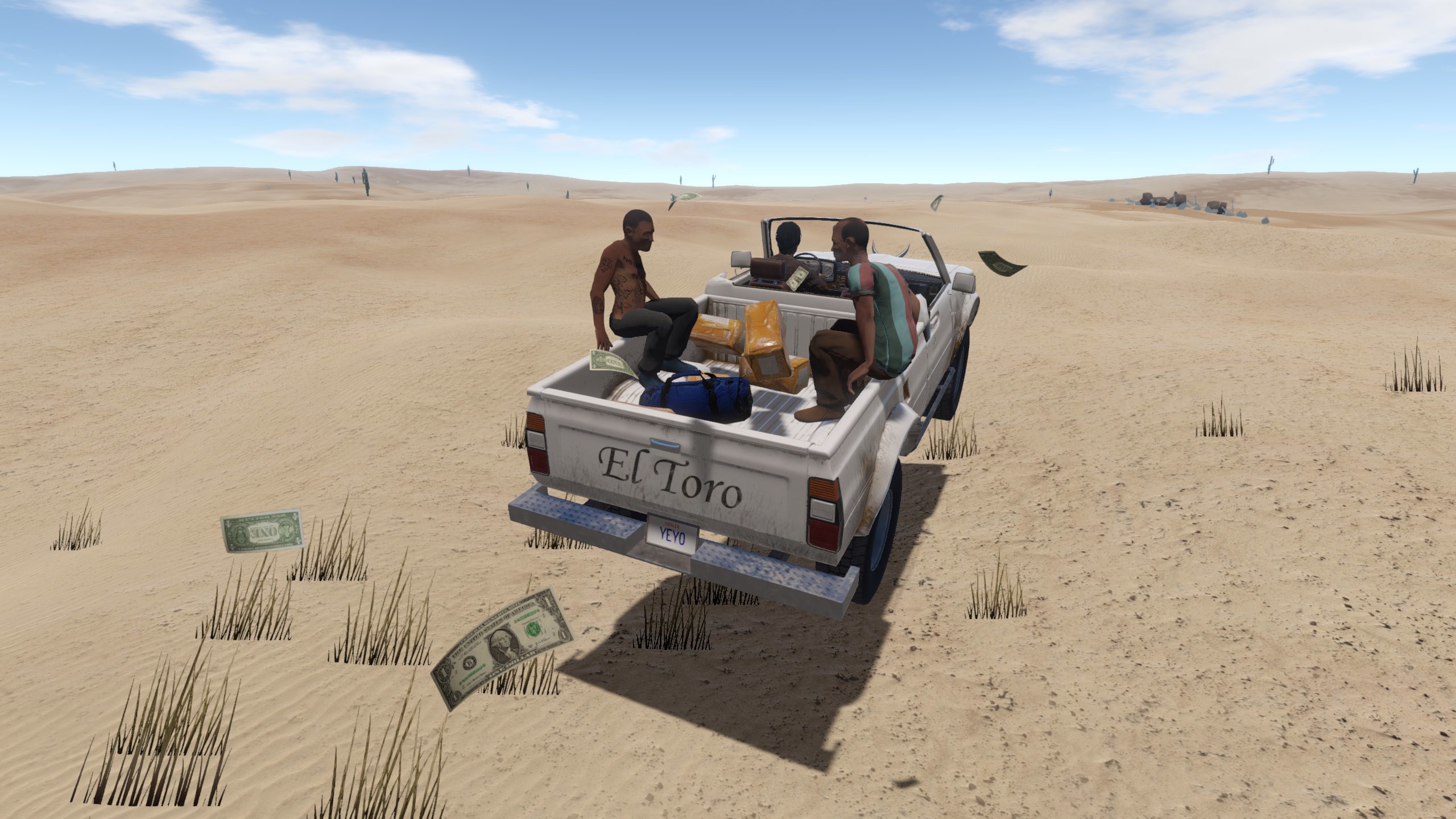 As the game gets closer to completion, optimization and polish are becoming a higher priority. Guts and Glory now runs better than ever! Check it out :D

Good to see UberHaxorNova getting a cameo, going to be awesome.

For anyone who happens to drop by here in the next few days...

Help me develop the 8th and final Guts and Glory character here: Goo.gl

"Who will ride the HoverBoard?"