The time has come, the first official patch for Stargate: Empire At War - Pegasus Chronicles is out!

At last can we present to you the first patch for Stargate - Empire at War: Pegasus Chronicles. It is packed full of new features, bug fixes, new maps and other surprises.

Perhaps the most important bug fix is the removal of the Tau'ri AI crash. We have also made a new Supergate "dialing system" and added a new ship to the Supergate build options, namely the ship piloted by the unknown race from "the Daedalus Variations" episode. To view a complete changelog, please click "Changelog" in the launcher options. 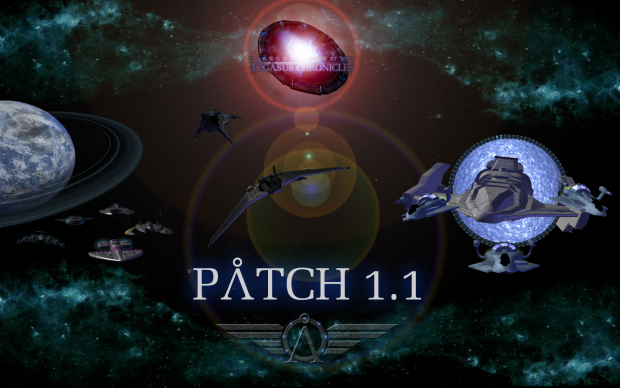 The patch is available via the update function built into the launcher. Since our first release version of the launcher did not work as expected, it has now been updated with bug fixes and some new functions. To install the new launcher please do the following:

1. Delete the old launcher from ...\Star Wars Empire at War Forces of Corruption\Mods\Stargate, along with the desktop shortcut, if you have one

3. Copy the new launcher into ...\Mods\Stargate. (To make a desktop shortcut, right-click the launcher, then "Send to" -> Desktop)

4. Start the launcher; it should automatically detect that an update is available. If not, click "Update". When the download is complete, set up language, tick the Steam-Version box if applicable etc.

We would love some feedback on the patch, especially the new features.
However, please note that the patch only contains new features for space skirmish, not for ground skirmish or GC. These are still being worked on and thus the future news will cover that topic.

Open the launcher and click on Settings.
What versions does it show in the upper window frame?

That is the correct path for Launcher ;-)

No, it is ...\Star Wars Empire at War Forces of Corruption\Mods\Stargate as in the news descriped. You see were your old launcher version is. So you just exchange the old version with the new one.

It doesn't matter ;)
The launcher works from everywhere and you don't even need to replace the old one. It's just important that the mod is installed in the correct path.

im running the steam gold pack and its 1.01 i have removed the game and every file to do with the mod reinstalled game and reapplied the mod but still nothing all i get is the star wars game not the stargate one

that worked perfect thank you very much

But do something in future with that AI, for frak's sake! It is soooo stupid at the moment,even on "Hard" difficulty. All what it do, is buying just a basic fighter squadron and sending it in one and same place, and on suicide attacks,again, and again, and again, and again.
Sorry, i know this is NOT full version yet.

Thanks for not giving up a good work! We appreciate that )
and be sure i'll vote for you in next "Mod of the Year"

When the AI is just sending one fighter there is something wrong with your installation. Try to reinstall the mod.

:/ can anyone try this with just 1000 credit/naguadah from start, becouse i preffer that way of scrimish, and then report here what you found,thx

Unfortunately we can't change the AI, because these it hard coded. But we do our best to improve that with the possibilities we have.

Btw. I have the problem, that the AI is always inactive, but when I renamed the folder "GoalFunctions" (for example "GoalFunctions1") the AI works fine. Just a tip.

An other thing you can try is just using a different map.
It sounds a bit odd, I know, but there can be huge differences in terms of difficulty depending on the map.
For example, the AI seems to be pretty weak on maps like "The Loop of Kon Garat" but it should give you a pretty hard time on maps like "Doaranda". You might want to give it a try.

I just tryed, well, all what AI needs is time, so i gave some, send recon mission and "Gods! He already has lvl 5!" :D and then multiple hiveships appeared! :D
After half a hour of epic battles i lost. :D

well i must say the new patch fixes loads of stuff one of which is the AI really great now vs ai on most maps, the ai is a challenge i actually got beat for once lol, was a fun game big thanks for the update.

well i know about the ai thing from my other post, but what ever u guys did in the patch, the ai is working thats my point, i mean its really working good :) lol don't ask why but for me this update has fixed every issue i had with the ai :) its great not stopped playing since it was released :)

Fantastic patch for what I consider to be the best Stargate mod for anything so far.

Version 1.0 for me crashed all the time, regardless which Laptop or Desktop I tried with the mod. However with this update I only have had one exception error and that was after dragging the game out into a stalemate for 2.5+ hours. This patch solved almost all the bugs for me. I look forward to the campaign. Until then I have one request, make those Tauri nukes more effective, they are really weak in terms of afflicting damage!

There is no Apollo in skirmish. I take it you are referring to Prometheus missile ability?

The Tau'ri GTSW is hard to balance as sadly damage is not always distributed evenly across hardpoints even when the projectile is set to damage multiple ones.

I guess he meant the "Beam Nuke" ability of the Daedalus. For the GTSW I can agree to increase these a little bit, but the nuke of the Daedalus is powerful enough in my mind.

Hey guys,
I downloaded the new launcher and updated to the new patch. Great new maps and really cool new cyborg ship unit.
Thanks again for an amazing mod and keep up the great work!!
:D

i have no permission to update?