Latest info about the development of the planetary engine

It's been some time since I blogged about the Outerra engine, so here comes the latest info about what we've been doing.

Lots of stuff has been done on the visuals - shadows are finally in, and even though they are not finished yet the output is much nicer with them. It uses a randomized lookup into the shadow map but the blurring pass is not present yet, so the closeups show noisy shadow edges. This will go away with the blurring pass on the shadow map. 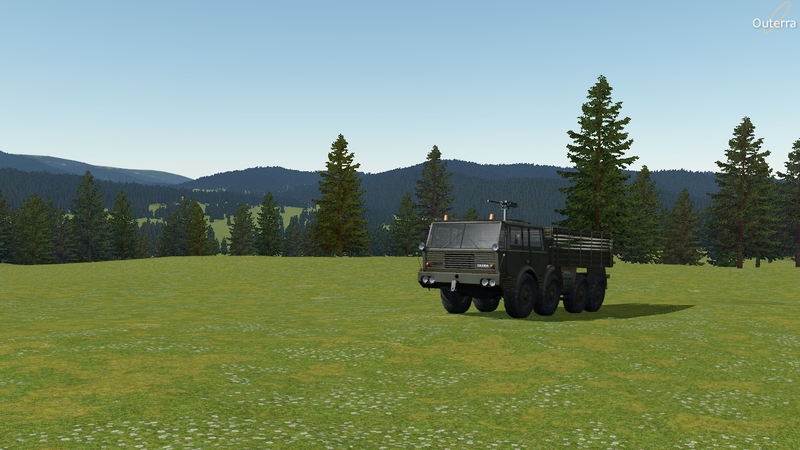 The ugly patterns on the ground visible in older screen shots, resulting from tiled textures have been suppressed by more fractal magic - a free fractal channel has been used to mix three textures (daisies, grass and a lighter grass) together and the pattern is almost completely gone. 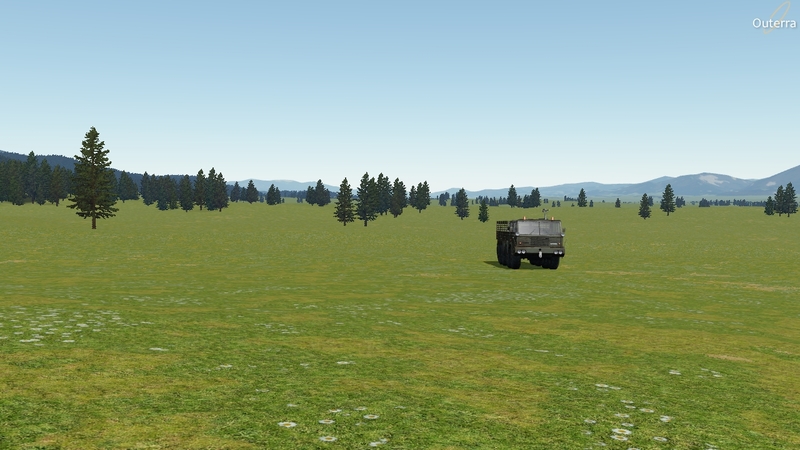 Another thing that helped a lot was the color transformation to linear space. This included both the input (loading the textures in sRGB format and also correctly computing the mipmaps) and setting the render target. The fix is most obvious on the atmosphere that now looks more natural. 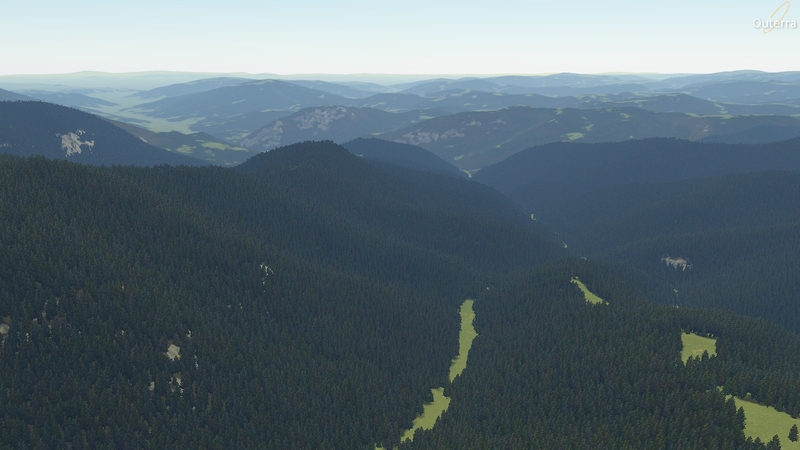 The trees are also slightly randomly colorized to break the monotonicity. 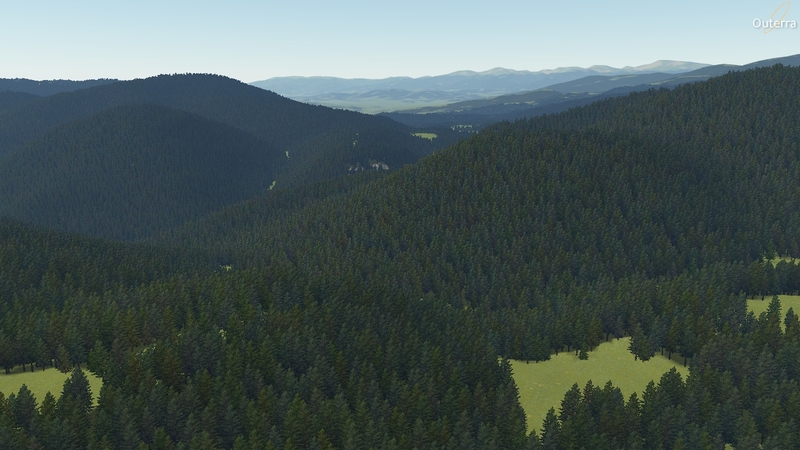 The material system has progressed as well, as it can be seen on the new truck model here. 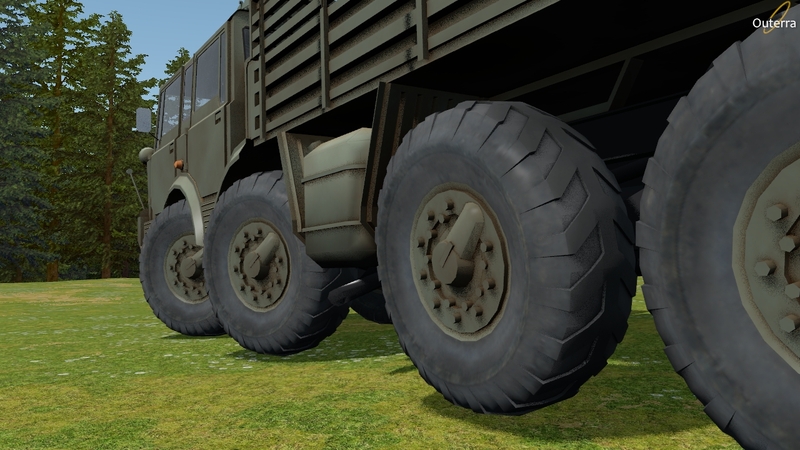 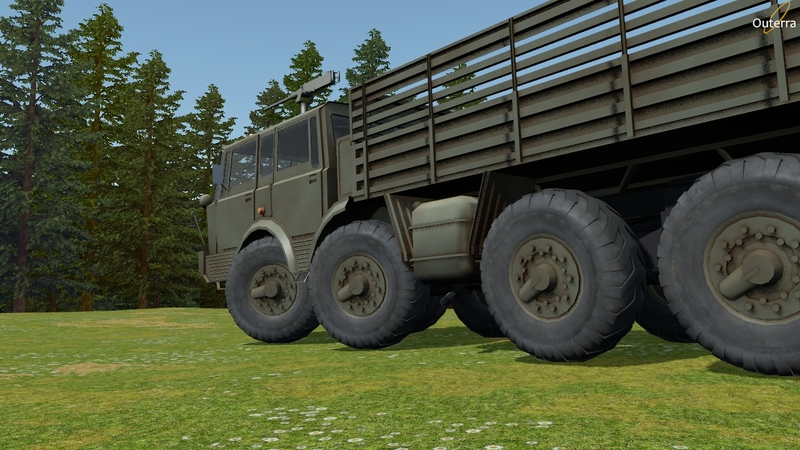 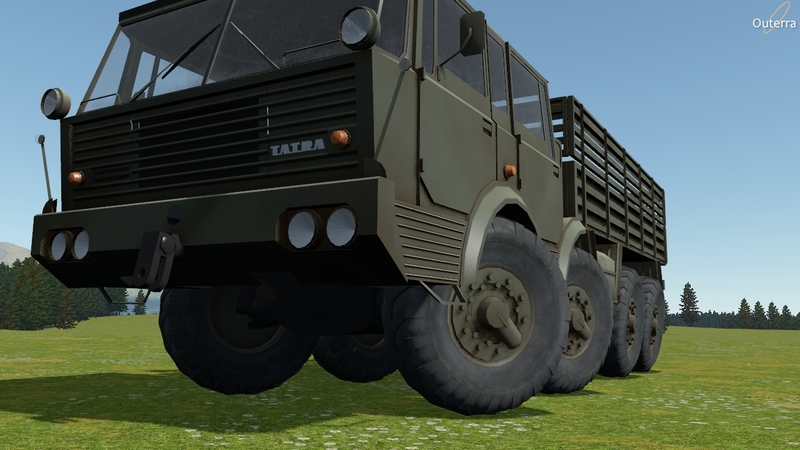 Also new is the support for dirty windows. 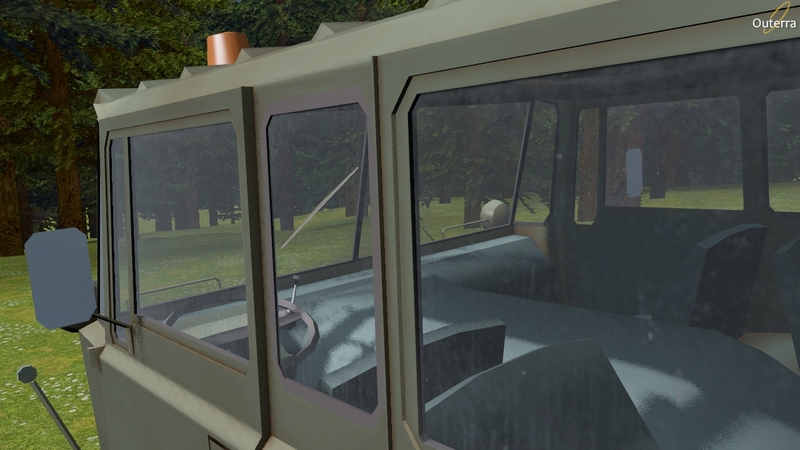 A gun is mounted on the roof, with a separate controller. It should be also functional soon, along with some flying prey to ground 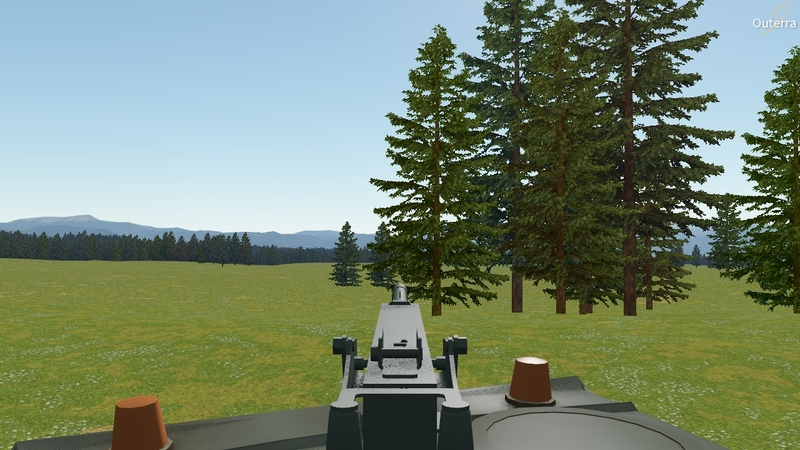 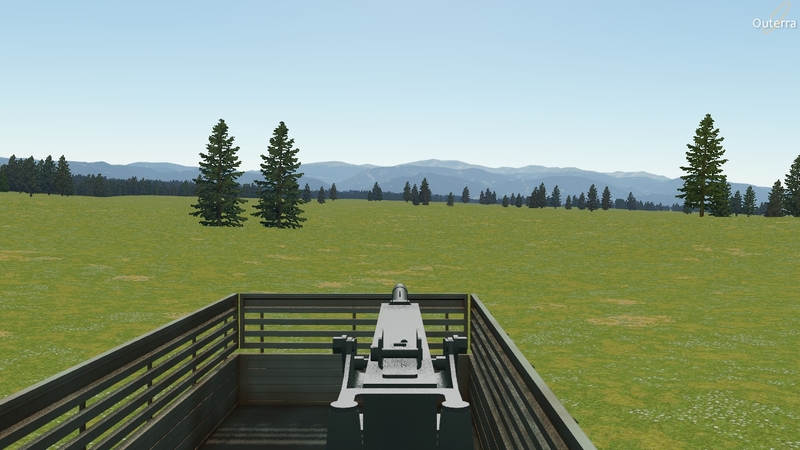 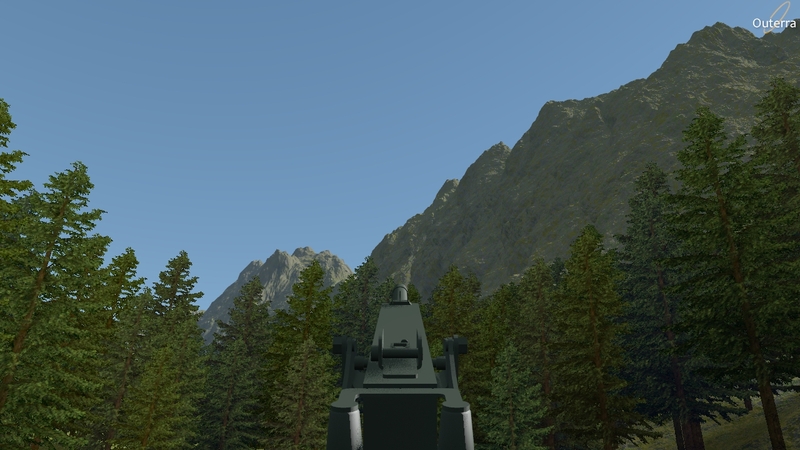 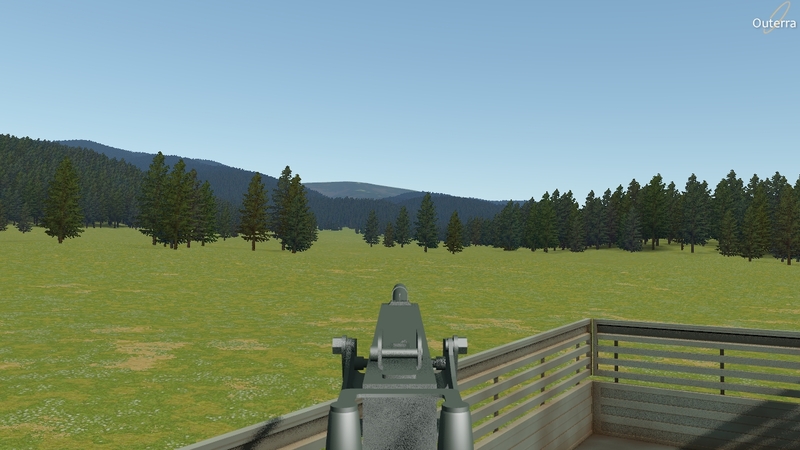 The new model appearing in the shots is the Tatra T813 8x8 heavy all-terrain truck with unique independent swing half axles. I wrote specialized code to handle its physics, and it works quite nicely. It is much better visible in motion, a video will be coming soon. 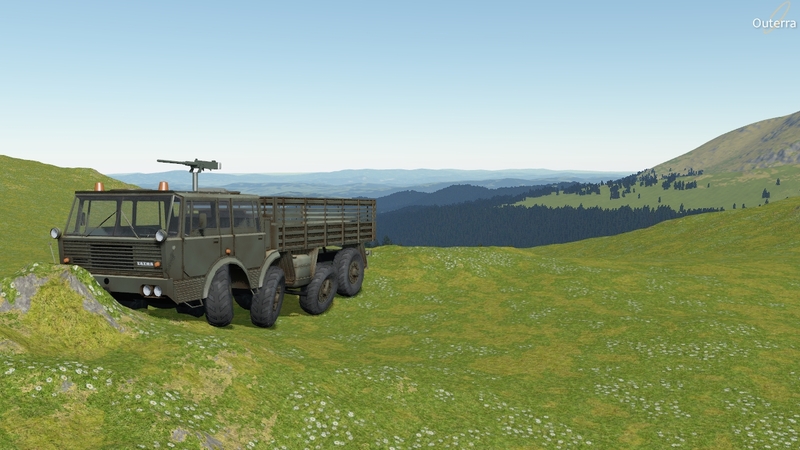 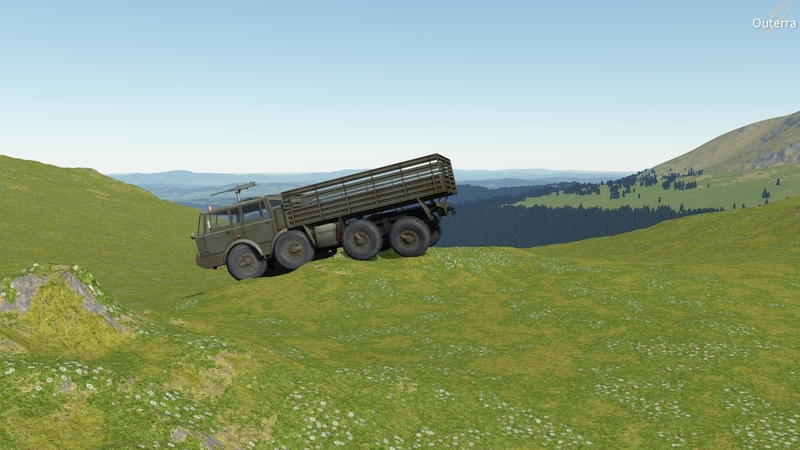 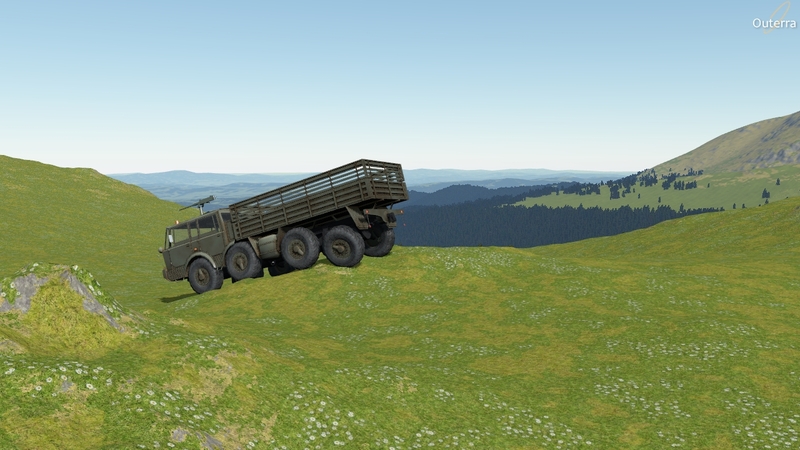 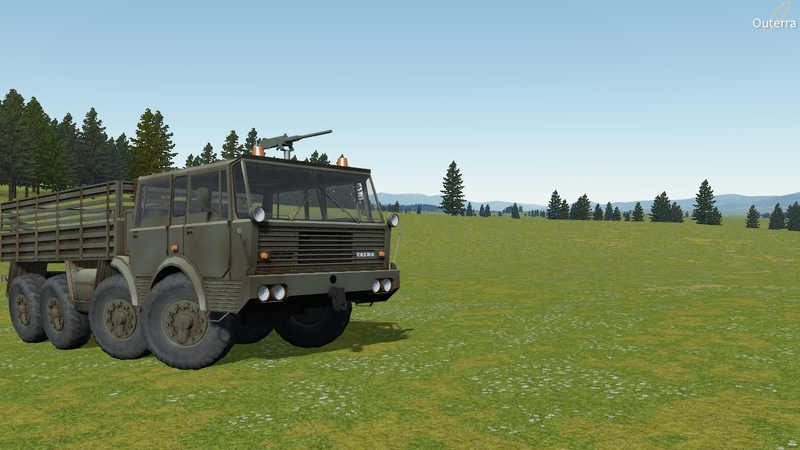 The Outerra Engine is a planetary engine in development, capable to render whole planets with seamless transition from space down to the surface. It can be used with real elevation dataset of arbitrary resolution, continuously refining it using advanced fractal techniques to reach centimeter resolutions. Efficient level-of-detail system allows for full terrain visibility - any distant features you can possibly see on Earth you can see here as well (even further if the atmosphere is unrealistically thinned out).

Aim of the engine is to render Earth and other planets using their known elevation, land class and ecosystem data, seamlessly augmented by fractal techniques generating the details.

... I really can't think of anything to say. 'Wow' and 'amazing' just don't touch this. And I mean that in a good way. Words fail me.

i think the words your thinking are ****, tits, sex, better than sex, a sandwich, better than bacon. should i go on?

better than sex is a sandwich with bacon....

It's a very cool engine

looking good. all i ask of you is to PLEASE make this have support for humanoid biped mechs and transforming mechs. multiple transformations. do this and i promise you will get alot of attention! this would be great for a robotech, gundam or MW game.

Put a lightmap on the terrain.

Reminds me of Arma, except the fantastic outer space transition. Looking forward to info on that!
This would be the greatest engine for a Stargate kind of game, or an entirely new franchise of a future world at war (like a big Planetstorm game).
P.S.: on their website you can see the transition to outer space.

It's amazing guys! The landscape is impressive. Keep it on!

Awesome work! I will track this engine for sure. *thums up*

i don't normally swear but this is fing amazing

this is really great I wonder what other kind of applications it will have.

All I can say is WOW!

Imagine a futuristic MMORPG where players can travel from planet to planet, star system to star system and have seamless transitions from orbit to surface!

Looks great but need a video to see more :D.

Please don't post more news updates without including another video of a truck rolling down endless hills. Every. time.

I'm definately thinking milsim. Will there be a flight ceiling?

Also, I would definately swear some of the long distance photos were real, if I didn't know better.

Beautiful screens. Other than a revolutionary engine is there a set game play concept yet?

Thanks. We have several concepts, ranging ultimately to a massive multiplayer game that alone can utilize the space, but we have to start small. Our first game should be a single player FPS with gameplay tuned to the large environment, but the details will be announced later.