NORTHWIND is now one month old! Read all about how the first month went and what's in store for it!

NORTHWIND is now one month old!
And what a month it's been! Started in early November, the project keeps growing exponentially! 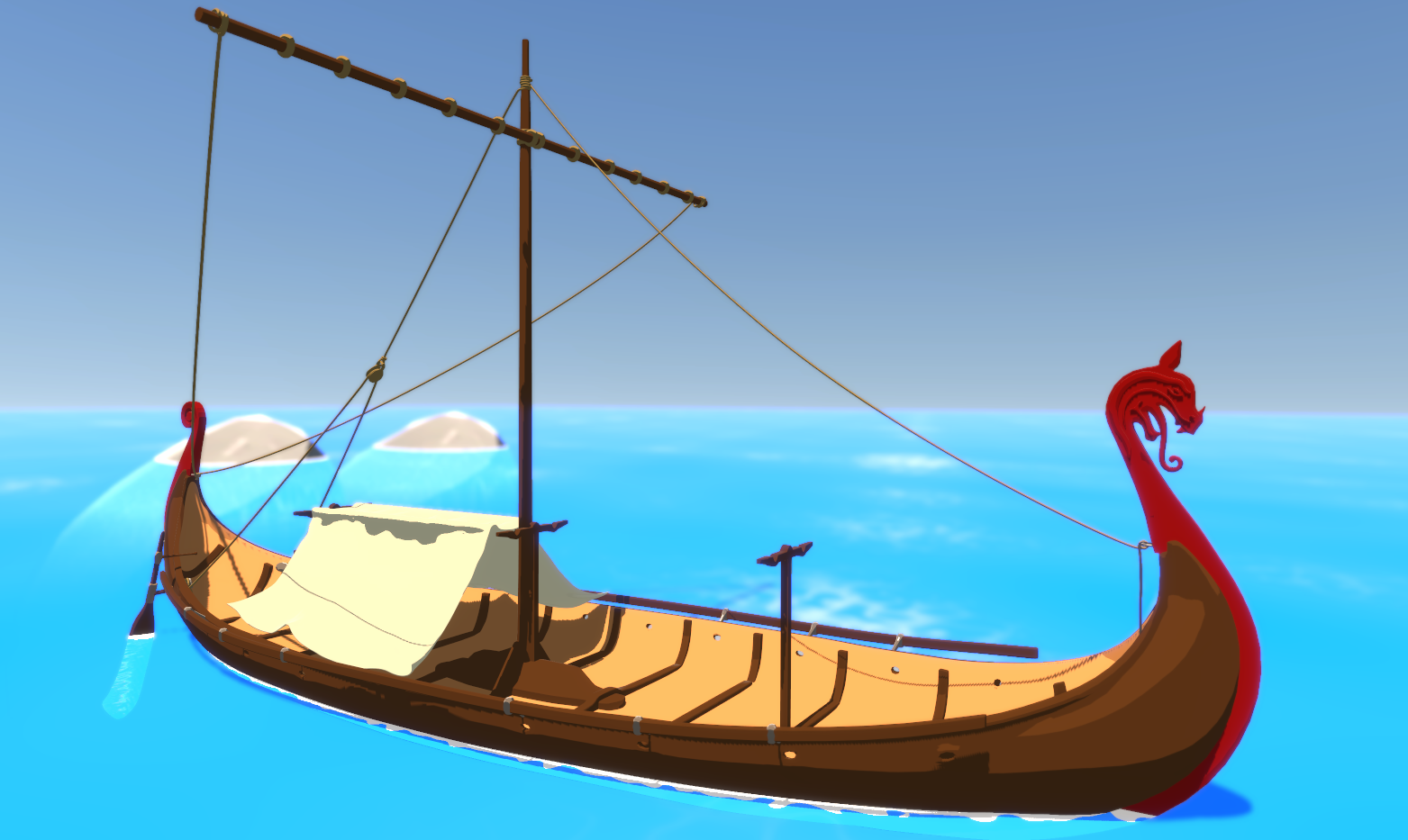 As an adventure/management game about Vikings, NORTHWIND will see players spend a tremendous amount of time on the water, going from one destination to the other in their trusty longboat. As such, one of the first things NORTHWIND needed was a solid ocean simulation; proper rendering, buoyancy, physics and wave behavior were all achieved within the first two weeks of development.

Without going into too much detail, NW's water system is essentially a plane mesh using a spring algorithm to simulate the ebb and flow of an ocean and nifty shading techniques to get the look and feel just right! The water physics are highly performant and can handle hundreds of floating objects with minimal impact on the FPS. The water shading handles every aspect of the water's appearance splendidly from coloring, lighting, caustics, reflection, foam, depth effects etc.

Staying on the water (or rather under it), here's a first look at NW's underwater view:

At the moment it's purely cosmetic but it may play a part in gameplay mechanics as development goes on. You can see underwater wildlife (here a whale) pass by as you travel. NW has dozens of land and sea critters ready to roll!

The ship itself is finalized too. The hull, figurehead, keel and sail are set up to be customizable. A new depth mask had to be made for the new model. The sail physics had to be polished and refined a bit, it moves better and no longer clips through the mast when there are backdrafts.

The world in NW needs to feel alive so great pains have been taken to present a believable environment with simulated natural cycles and dynamic systems.

So far, NW accurately simulates weather systems, sun and moon positioning and the overall progression of time. On top of landscapes showcased in previous posts. Days go by, the weather and the seasons change, the moon goes through its cycle and the sun's position in the sky changes according to the current season. Although to be more palatable the seasons only last 10 days each. Resulting in 40-days years!

In the near future, those systems will be linked to ocean behavior, temperature, events and wind direction/speed.

Speaking of wind, you can now see a visual representation of it via wind trails in the environment! This will help gauge the wind direction and velocity.

I haven't talked much about characters yet mostly because their bodies and face models are still in the works (they're what I call test-vikings at the moment, fearsome helmeted capsules!) but there are some mechanics worth mentioning.

Project V at its core aims to be a Viking Age Oregon Trail, with a few twists. The first thing you do in Oregon Trail is make a group you'll care for and try to protect on the journey ahead. That'll be the case for NORTHWIND as well, where you'll pick the genders, faces, hairstyles, beards (if male) and names of your vikings.

The vikings also have different traits, giving them unique personalities. Those random personalities act as conditions for events and modifiers for stats and will lead to emergent situations. For example, say you have three vikings with you on your trip to pillage an English settlement; Olaf, Ragnar and Bjorn. Olaf is a glutton and eats far more than the other two, but he's also a great fighter so you tolerate him. Unfortunately, turns out rats found their way aboard the ship and ate a large portion of your supplies (semi-random event). There's not enough food for everyone and Olaf is quickly reaching his breaking point, at which point he'll become disloyal. You could take a number of paths here; you could give his rations to Erik and Ragnar to speed up the inevitable and ensure their loyalty in the event of a mutiny, spend time trying to catch fish to bolster your supplies, maybe pray to the gods? Whatever your decision, the raid will probably not go as you planned it when you first set out!

Expect many different situations like this where events, needs and traits all come together to shape the unexpected!

A tremendous amount of work went into NORTHWIND already, but it's not nearly done yet! Many existing systems still have to be refined and many more need to be implemented.

With solid environmental systems and a beautiful artstyle as a base, focus will now switch to gameplay and user interactions. Even with careful scoping and steady progress, there's still much left to be done; the travel mechanics, trading system, inventory system, animation, character presentation, character dynamics, navigation, resource management, location interactions, event system, factions, minigames, sound and music etc. It all amounts to a couple more months of work at least!

I haven't set a fixed release date for the moment, although I expect it to be done within the year 2021. A funding campaign on kickstarter is planned for when the project finally reaches a satisfyingly-playable and presentable state. Most likely 3/4 of the way through, with accompanying rewards and milestones. So keep an eye out for that! Once it's complete it will be available on Steam (steam page coming soon) and Itchio for around $15.

Until then there's much to be done to make this game as engaging and fun as possible, looking forward to it and I will keep sharing regular updates with the community! I hope everyone enjoys seeing NW evolve as much as I enjoy working on it!

If you have any questions or comments, leave them here down below or join the community by engaging with us on our official discord, facebook and by following me on twitter!