So you thought I had already done everything possible in this fantastic game? Then you were wrong, totally wrong! Here's a list of some of the things I like to do add 2013! Enjoy the reading. 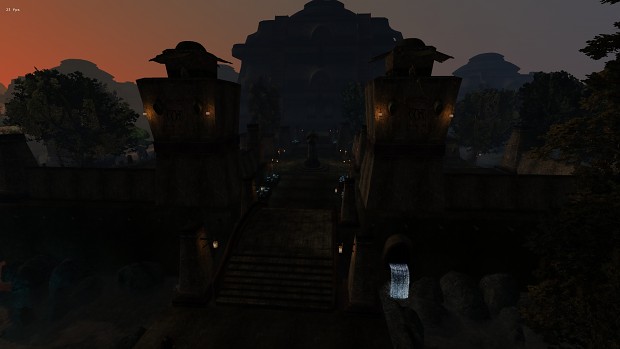 * Balmora Museum - I loved the Mournhold Museum and It was kinda sad that you werent able to see something similar in Vvardenfell. The wait is over my friends! Balmora Museum have a vast collection of items that are displayed both familiar and exotic stuff!
* New Gnaar Mok - Some of you might have noticed that I've already made some changes to Gnaar Mok in previous versions. Lets make this clear, this is not how it will look in the future. The current layout is pretty lame and I want to make sure it keeps the same quality as to what I did with Seyda Neen.
* New Sadrith Mora - It's clearly stated that Sadrith Mora should have been "off limits" to outlanders, if they didn't have the appropriate papers to show the officials. My idea is to add "walls" to the city and add a script that will make the player unable to enter without these papers.
* Southern Ashlands - The southern region will be transformed to make it unique in comparison to its northern counterpart (don't worry there will still be loads of ash to play around with).
* New Interiors - Finish a bunch of interiors that are missing in the most recent version.

* Ruined villages - It seems reasonable that the Island should at least have 1 or 2 small villages that were left and abandonned. More immersion if nothing else.
* Imperial encampments - 1 or 2 small encampments situated in the West Gash.
* Signs of the blight - With the threat of Dagoth Ur and the blight cursing the lands there should have been more signs of the blight. One example could be small camps with NPC's that have turned into walkers or small battles between NPC's and blighted creatures. Nothing major but it will hopefully add to the feeling that there's a imminent threat that has to be solved.
* Ancient battlefield - With the rival houses on the Island and things that have occured in the past its only viable that there's been a few battles taking place, or small skirmishes.
* Guar farms - Everyone loves Guars right?
* The Lost Tribes - Argonians' that didn't wish to follow their more civilized brothers and sisters or refused to be sold as slaves, have choosen to live in tribes along The Bitter Coast.
* Old Seyda Neen - Things didn't go very well for the first Imperial Settlers as they first arrived to Vvardenfell, local creatures and villans forced them to relocate and leave their old village, not much remain to be seen but those who are searching for some extra coins might be interested to explore this area.

* 4 new types of bread - Cause bread is awesome.
* New ingredients for the Deadlands - Human parts like brain and kidney.

* Families Of Vvardenfell - This project will add new NPC's to some homes. Basiclly for realism but also to make it harder to steal items.

And of course a lot of other small additions/fixes that will be revealed when the time is right!

I am not sure if you have answered this question or not (or if it has already been added) but do you have any plans for expanding the great houses? more specifically the strongholds you get as you advance through the quest line?

It's a good idea, though but it would go beyond my current skillset, I don't know anything about the scripting it would require.

Would it be possible to give NPCs schedules, like in Oblivion and such? That way they'd walk from place to place, go home at night, eat, etc.

It is possible but it would require a lot of scripting, something that I'm not able to do. Perhaps in the future!

Ah, I found a mod called "Living Cities of Vvardenfell" on Planet Elder Scrolls that seems to do just that.

-Have you added some kind of ingame ingredient sorter? I had one that used chests and would sort any ingredient found in the game.
-Do you make use of the "top mods" or do you create everything yourself?

There's no sorter atm, I'm not familiar with this mod that sorts the ingredients. I'm also not sure why it would help if it's not being done to every item in the game.

I do not make use of the top mods at all to be honest. There are some mods included like Vurt's Trees, PeterBitt's Blighted Creatures and Balmora Underworld and some other small mods. Otherwise I make all of the landscaping, citybuilding on my own, using community resources when necessary. The mod doesn't contain anything that would stand out from the vanilla game or would seem to be overpowered.

These comments are great :D :D :D like them. Wish you good luck, and work to implement all these new things! They sound great.