With the new release of Company of Heroes onto Steam, there has been the need to update our mod. We have fixed the bugs and Fatal Errors, and you will now be able to play the Mod on the Relaunch version! We have put together a full new installer to put these changes in effect. Also make new users have a much easier time installing the mod.

You may have noticed that our site has gone down (again...) and that the Company of Heroes servers are being taken down from Quazel this week. However don't worry Relic has created a new version of CoH (v2.700) with a connection to the Steamworks servers.

If you need help retrieving your CD/DVD key for the transfer to Steam you can use the Relic tool here.

Now we have been planning to move all our assets to our own server instead of the Black Sand Servers which have been temperamental with the occasional crashes and server unavailability. With the move we have been working on a new website and forums. With the last crash in late April we have lost quite a bit of data and have been forced to release our new server slightly prematurely. However this past week we have been working hard to prepare everything for you guys!

So our new server is live here 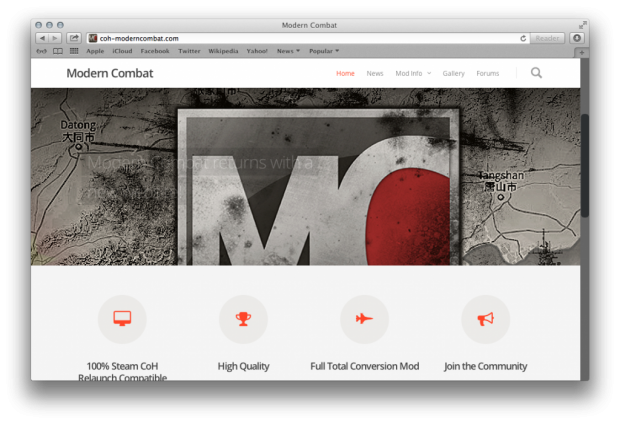 Please check it out, play around with it and let us know if there are any bugs on our new forums.

Now we have added commenting all across the site, and your forum account is linked to the main site so everything should work in unison! Not only this, but the site has been optimized for any device you plan to view the site with. So weather its a tablet or mobile device, everything will be rendered correctly. 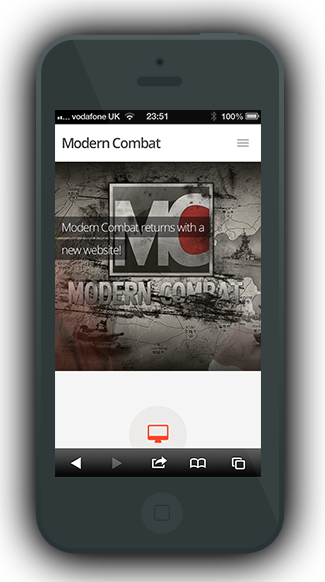 We will be working towards putting the old features of our site in the coming weeks (finishing off the gallery, adding unit pages, putting back the leaderboard) and new ones.

Now onto the new version of Modern Combat.
We have been planning a full installer for 1.005, and it seems fitting now with the new move to the Steam Relaunch. The installer will automatically find the location of your CoH Steam Relaunch folder and automate the install process. No need to worry about where and what to extract. We have not included many changes to the mod in this version as we did not want to break anything with the transition.

You will find these changes:

Changelog wrote:
General Changes
- Fixed SMAW being droppable (was using CG prop item).
- Fixed grenade launcher recoil bugs.
- Fixed base grenade launcher accuracy by increasing to 1 (even though it wasn't affecting hit percentages it was still affecting the accuracy of AoE blasts).
- Uploaded proper icons and a weapon symbol for the M32 and Corpsman.
- Updated many unit icons and symbols.

US Changes
- Fixed the camo for seals MP7.
- Decreased m27 damage from 7 per bullet to 5 per bullet.
- Fixed doctrinal US Riflemen/Marine goggles and abilities not working due to the recent standalone USMC doctrine trees.
- Fixed Tac Airlifting and Adv Recruitment values. Former now increases vehicle production by +50%, latter infantry production/reinforcement by +25%.
- Marines can now buy 2 IARs and have a suppressive fire ability similar to vCoH's.
- Revised MARSOC stats and armour type. Now begin as a slightly more powerful version of GBs/SEALs by default (+5 HP, +10 damage) and cost 500 manpower (up from 375).
- MARSOC now have M32 and Corpsman squad upgrades. The former gives them the semi-auto grenade launcher, the latter bumps them up to 5 men and gives them a targeted healing ability. Both upgrades work perfectly and have great synergy with the rest of the faction.
- Gave GB/SEAL M4s holographic sights.
- Reduced M32 scatter.
- Reduced M32 cooldown by 0.5 seconds.
- Increased Apache health from 250-400 as it was dying too fast to AA fire (which if nerfed would be useless against planes. They previously had more health than an Apache yet were only targetable for a fraction of the time).
- Increased ATGM TOW damage to match the tripod and Bradley TOWs, but lowered their fire-rate to compensate. No effect on overall DPS, but they do require fewer hits against certain targets.
- LAVs can now carry 5-man squads.
- Gave Corpsman upgrade a slot item symbol.
- Removed shoulder flag from Marine skin.


We have yet to decide how further patches will be delivered so please keep your eyes peeled. Also join our new community, we will be putting up some systems on our website to make an easy transition for matchmaking, especially with everyone now on Steam Accounts.

All the Best,
~The Modern Combat Dev Team

For old versions of the mod, make sure you first delete the ModernCombat folder in your CoH directory!

Now with the new Steam Relaunch of Company of Heroes, you will need to create a shortcut in order to launch the mod, since our Launcher does not work anymore. There are 2 ways you can do this. You can either make a shortcut directly, or you can add the mod to your Steam Library. Both methods work (with overlay as well) and there are no disadvantages of either.

Desktop Shortcut
For the shortcut you simply right click your Desktop or any location you want. Select New --> Shortcut and then browse to your RelicCoH.exe in your Company of Heroes Relaunch folder. Here is an example:

and change it to:


Now you give the shortcut whatever name you want, like "Modern Combat Mod".

You can also press Change Icon, and choose our own icon from the mod's files:


And that is it! Now you can run the Modern Combat on the new 2.700 version of Company of Heroes!

i read patch 1.0 and though i was looking at Project Reality D:

Hahaha greetings from one PR player to another!

Am I the only one who thinks SEGA is trying to bleed out the old CoH I community dry?

I read some commnents on the CoH website saying how this "relaunch" patch breaks some in-game functions and has bugs. Then again, non-Steam CoH wasn't perfect.

Perhaps SEGA is trying to ditch the old for the new, switching community attention from the Western Front to the Eastern Front. Kind of funny it is considering how the Ostheer is almost ready for CoH:EF making it the FIRST game of the franchise to feature that part of the war fully made if it makes it in time. I doubt it would affect the sales of CoH II though.

I thought about that too. But I kinda doubt it for two reasons:
1) The COH mod community is pretty small. I'd say that we're no bigger than 20 000 people who play COH mods (most people I know who play COH don't even know that the game had mods) which is a small percentage of total customer base. And out of these 20 000, I'm sure that most will still buy COH 2.

2) If they want to bleed us dry, they'll probably have to release a bunch of patches one after another. But I doubt that they'll do it because this means paying a bunch of people to continuously update a 6-year old game, which can end up being a huge financial burden with little return in investment. Mod developers don't have this burden since they were doing it for free anyways. Yes, Relic is several times bigger than all the mods teams combined but it can only devote that much resources against the mod community.

And last thing: Even the evil EA didn't try to screw up BF2 mods when it released BF3.

Am I the only one for which the COH cd-key tool results in an redirect loop (as diagnosed by chrome)?

Not sure what you meant there.

If you have problems adapting CoH to Steam you should ask the SEGA support team.

That's to do with Relic and Sega. I personally have never used the service so I do not know, you should contact their support team or post on the Official Company of Heroes forums

Are you sure your not using a Pirate copy lmao

So the directory you're using doesn't exist. You didn't just copy and paste the one in the example did you?...

Or maybe you didn't put a space before -dev parameter

it doesn't let me put" when i try to rename relic.exe to relic.exe -dev -mod ModernCombat

where do i change the location at?
please someone help im getting close!

also when i cick on the moderncombat shortcut and the patching screen comes up with news, a message pops up saying: the remote server returned an error:(404) Not Found.