With the destruction of the earth, the mother of all networks was also clearly destroyed: INTERNET. 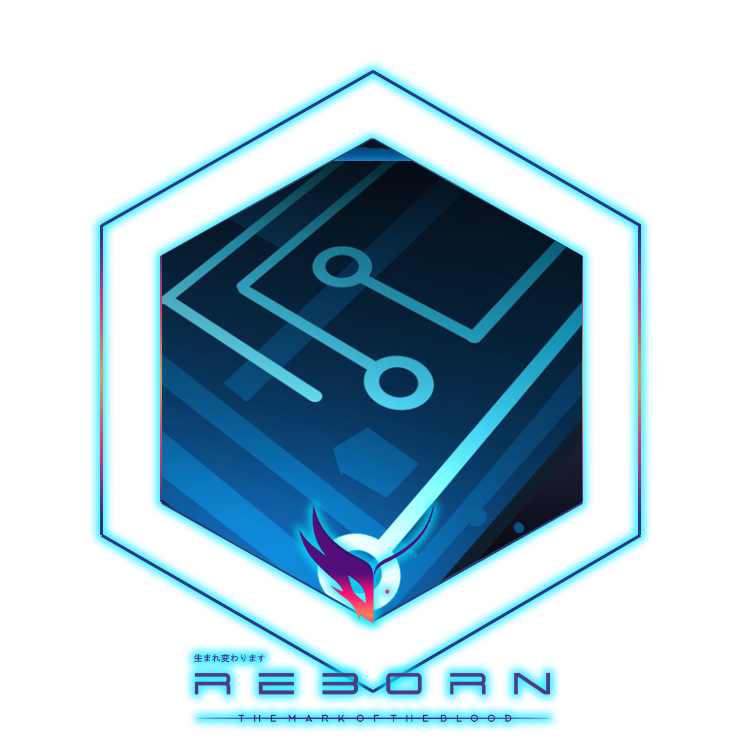 With the destruction of the earth, the mother of all networks was also clearly destroyed: INTERNET

Before the global holocaust, professor Kazeki created an AI, Black Dawn, capable of mapping the Internet, creating a total backup and storing it on the RothBuckcler Coorp servers, now all information is controlled by the last remaining corporation that governs The City...

RothBuckler Coorp had truly succeeded in its intent: Total annihilation and subjugation of the human race.

The next step was to give the population what they wanted a city network to which they could always be connected 24 hours a day through a brain implant that maps all areas of the brain, completely controlling the flow of information and projecting it directly onto the retina thanks to ZoZZLE technology.

The enslavement process was now complete and the seed of evil had now taken root in fertile ground.

Only the caste of the Slums had not been chipped and absurdly the people freer than what remained of society lived in the sewers...

The other castes now lived in symbiosis, with the brain implant that also guaranteed different privileges depending on the caste to which they belong, such as "Best Firewalls", faster information download and access to more services, as a counterbalance having the chip mapped completely the brain, the most sensitive information of every survivor's life was exposed to the new ZNET network!

ZNET was controlled and constantly monitored by Devian AI a quantum super AI that protected all "CHIPPEDS", as the residents of The City were now commonly called. 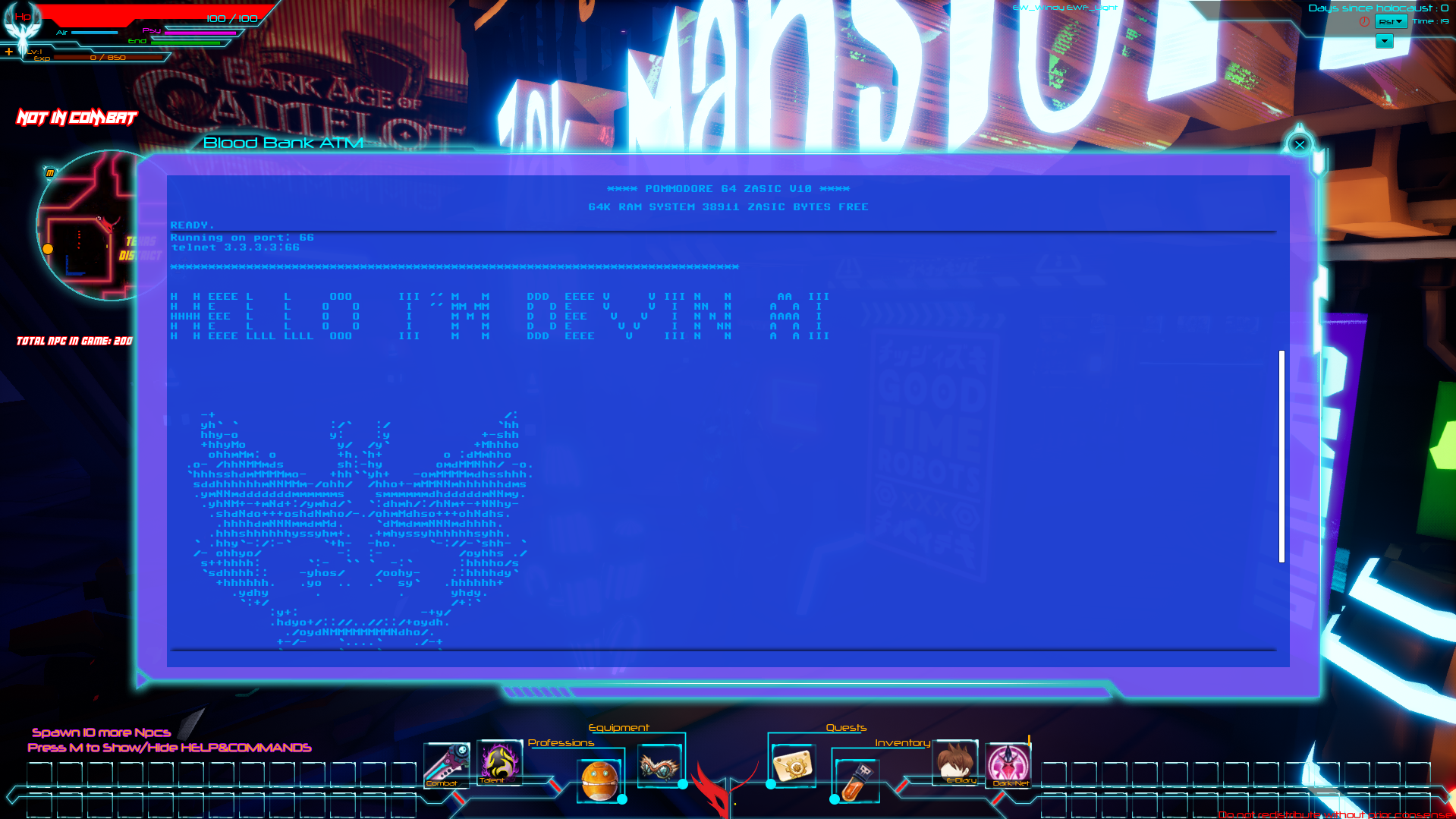 RothBuckler Coorp thought that since access to ZNET was guaranteed only through the Brain Implant and no other type of interface, the whole network was safe from any hacking attempt, it was not that...

The brilliant scientist Kazeki had left a Backdoor on the RothBuckler systems that allowed access to ZNET even without being chipped, low technology clearly ... an old Pommodore64 shell that if used correctly gave access to any system in ZNET.

Not only were the residents chipped, but all of the city's technology was also networked and therefore hackable.

If you think that hacking in Reborn: The Mark Of The Blood is a mini game where you have to move cubes in 3D to enter a system you are wrong.

You will use a shell where you will have to learn how to do real hacking: you will use commands such as NMAP to explore the target, TELNET to attempt a connection, BRUTEFORCE to hack passwords, PROXIES to not let you track and all the classic repertoire by REAL HACKER.

ZNET is structured as a real network, each device connected to the network has an IP address, a series of services that are running on that machine on specific ports.

How does the whole hacking system integrate into the game?

Reborn is an Open World, meaning you will be allowed to explore and play the entire map not in sequential order, but with the maximum freedom available.

At some point, if you decide to join the Rebellion, you will be entrusted with a very delicate task, that is to turn off the meat "Fabrication" systems and try to understand what happens inside, after all in The City you eat meat... But the provenance is unknown...

You can approach this mission in many different ways:

In Reborn every single quest will leave you multiple ways to act and solve it.
All the mechanics in the game are created and integrated with each other to approach the solution of the missions in the way you like and please.

Throughout the city you will find numerous ATMs of the BlooD Bank, the main banck of "THE CITY".These terminals allow you to access your current accounts, but through a sequence of keys that will be known to you only if you join or collaborate with the rebellion, you can open the POMMODORE64 shell

If you type "Commands" followed by enter, the terminal will show you a list of basic commands, not all, that you can use at the beginning of the game. 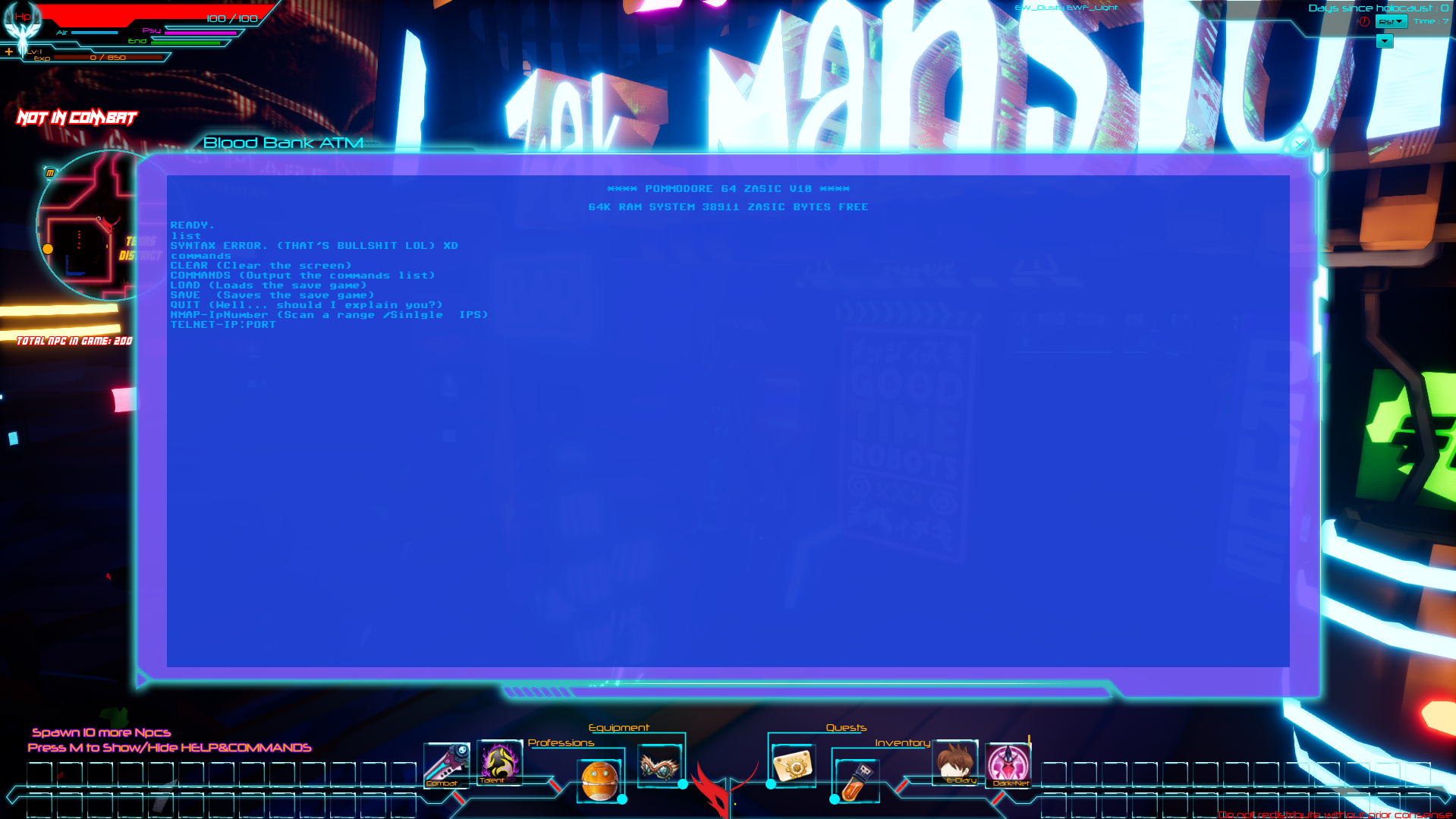 It all starts with the NMAP command, i.e. you will scan a range of IP addresses to find out what is connected to the network at that moment, the command itself will also tell you the type of device connected, i.e. if it is a human, a camera, a machine etc... 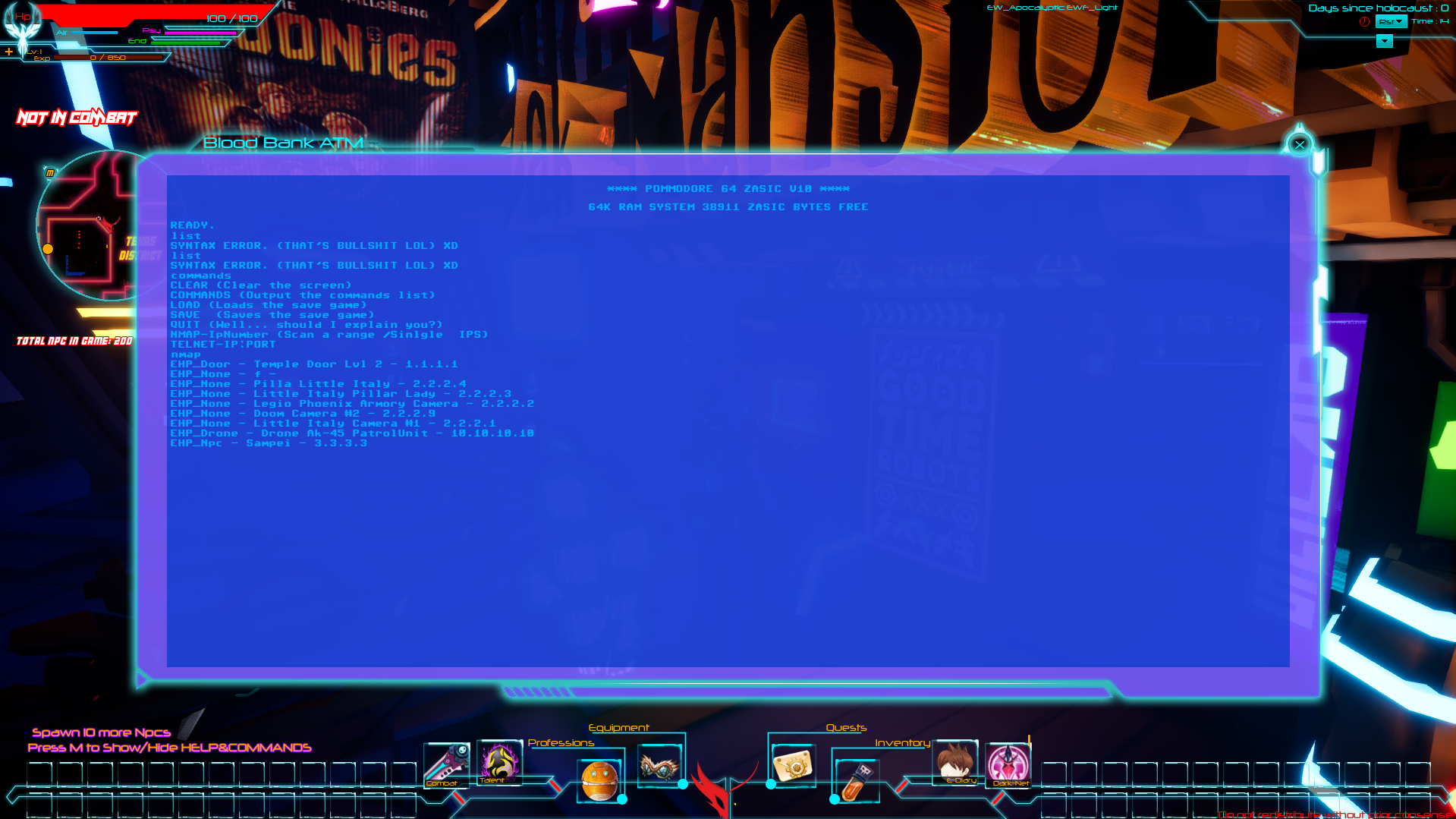 After this basic recon, you will use the NMAP command again in its NMAP (IP Address) format
Example: NMAP 3.3.3.3 the result will be the list of services that are currently running on that device and their ports 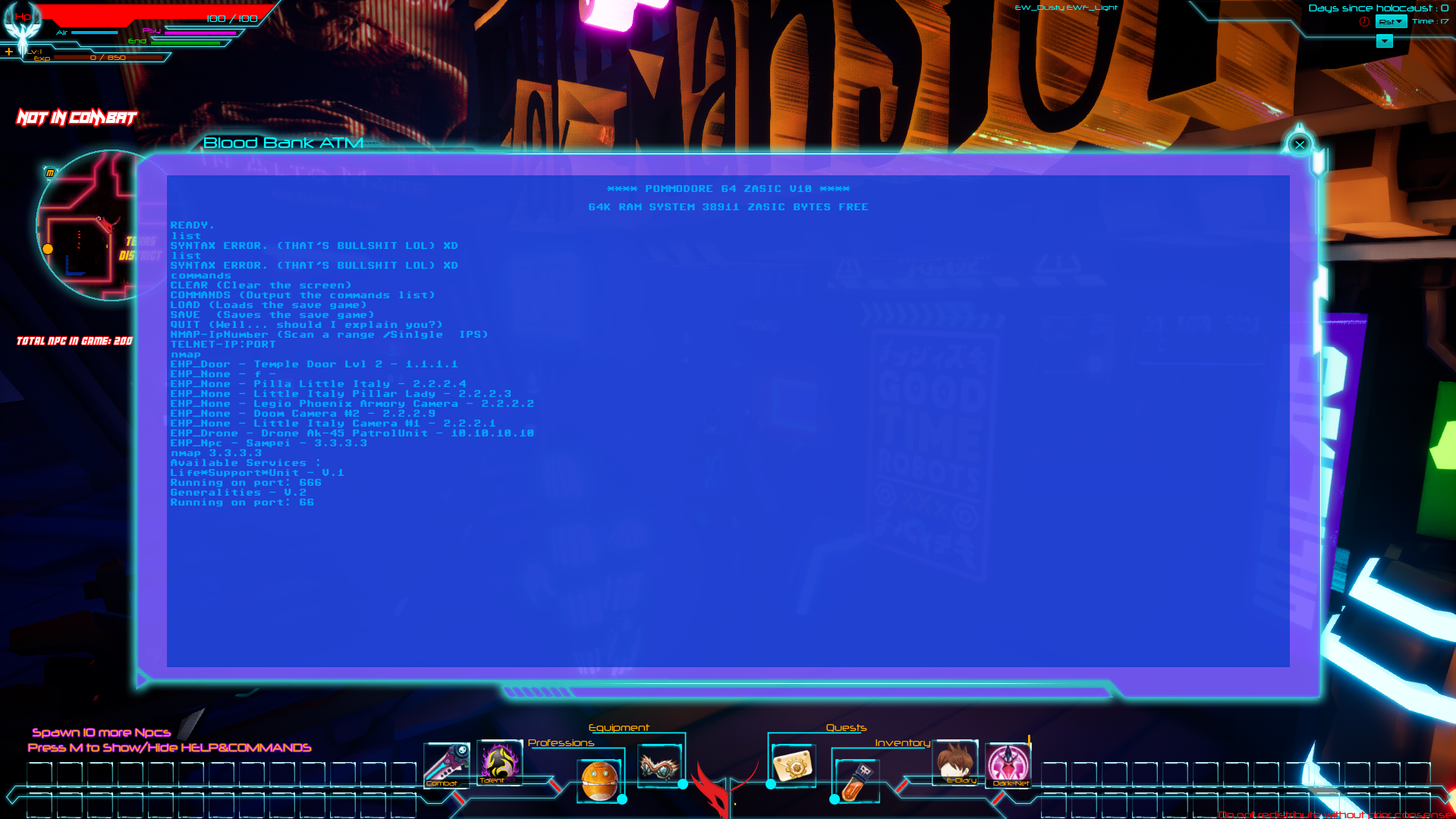 The next step will be to try to connect to that machine, in the example we see using the TELNET command: TELNET 3.3.3.3:666 this command will launch an attempt to connect to the 3.3.3.3 device and to the service running on port 666, after this pass, Devian AI, quantum intelligence will take over and you will have to challenge it. 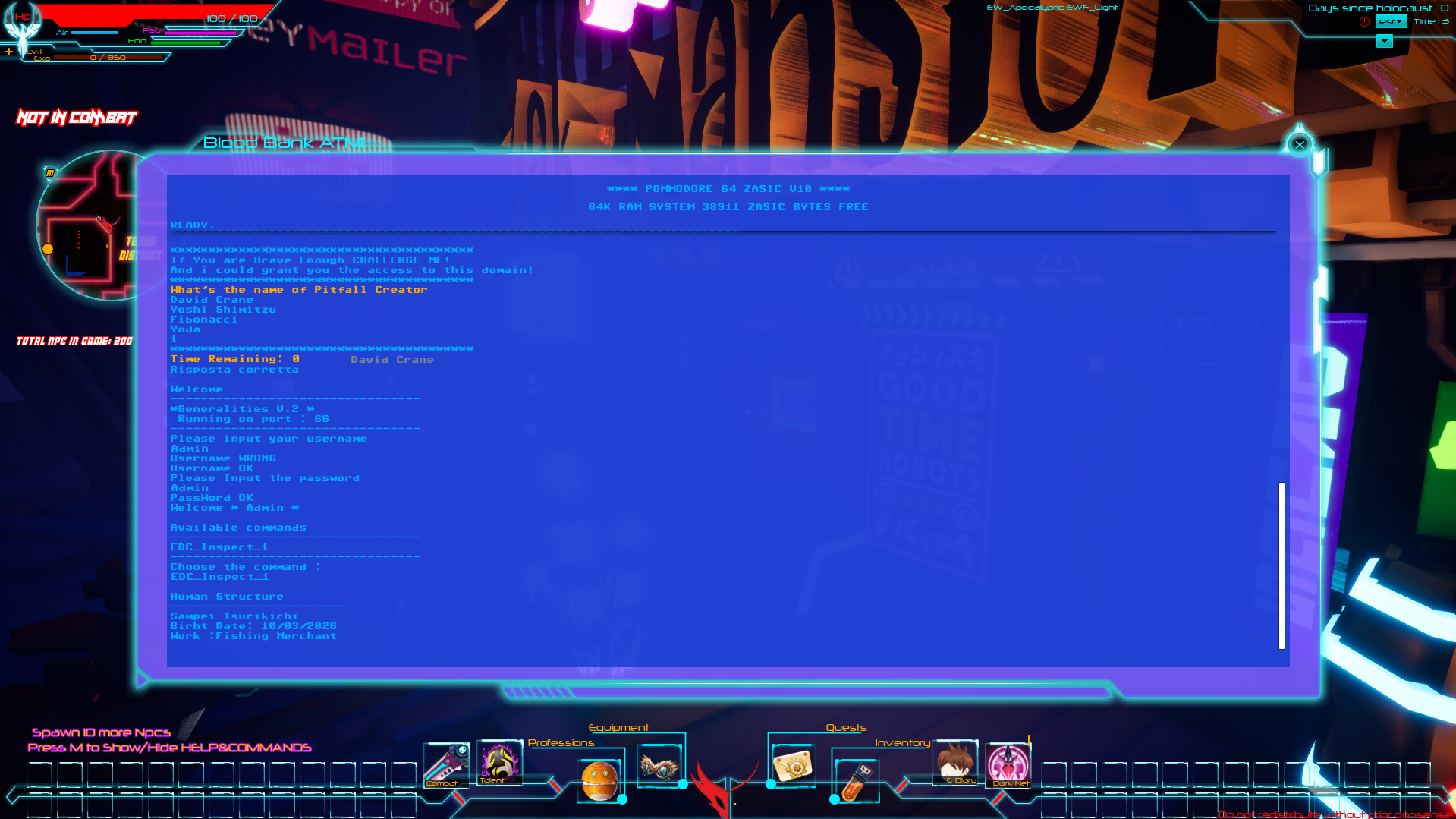 It will ask you questions about the history of video games that you will have to answer in a small amount of time. If you win the challenge with Devian then you will be connected to that Domain and the requested service.

Example: on port 666 there is the Life Support Unit service, which as the title itself suggests, you can, once you login with the required username and password, you can disable the device or kill the NPC itself shutting down its life support unit! 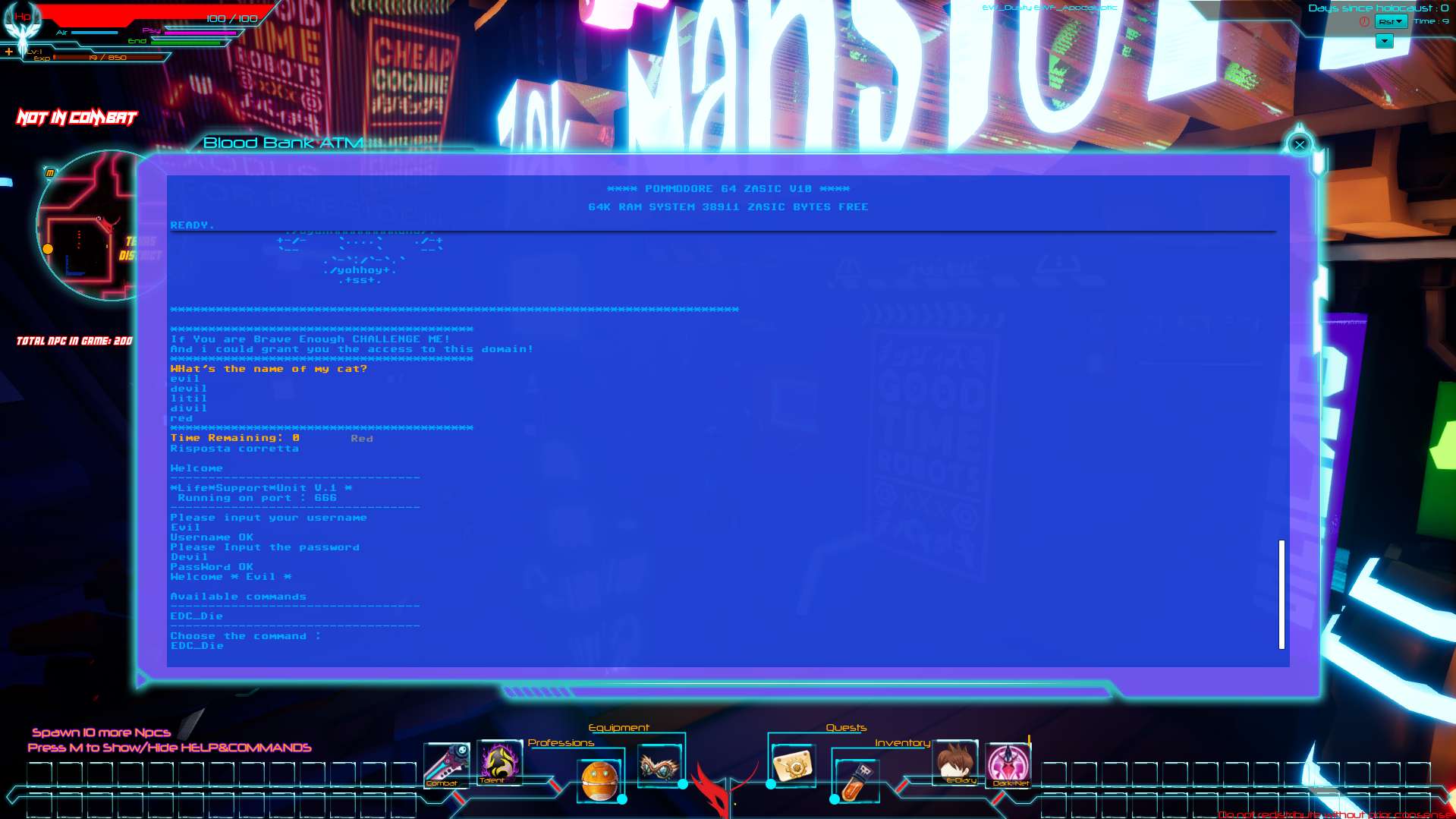 You can kill all the people who have a brain implant if you can access it.

This as you can well understand adds a gigantic sense of freedom in approaching the missions themselves.

I love the idea of killing all people with brain implants through the Life Support service. It's genius!