Hello all! I have an update on progress. Read this article to find out more.

So, after a LONG time of getting planets into their canonical positions I have mastered the skill of planet positioning (Skyrim level up SFX plays). But that doesn't mean I am done with that. I still have some more planets to place and move and so on. Also, lots of stuff is happening :) We have a new Episode III style Venator being modeled right now. And as far as our finished models go, they are getting skinned.

He is a picture of the finalized AAT model with its new skin. *NOTE: The skin is still being worked on*
The AAT will be used in both this mod, and the Star Wars- The Clone Wars mod that Ozzy667 leads. Ozzy and Holybeast have put tremendous work in this model and I want to thank them. And as for the skinner, 501stDenal get a big thank you as well. 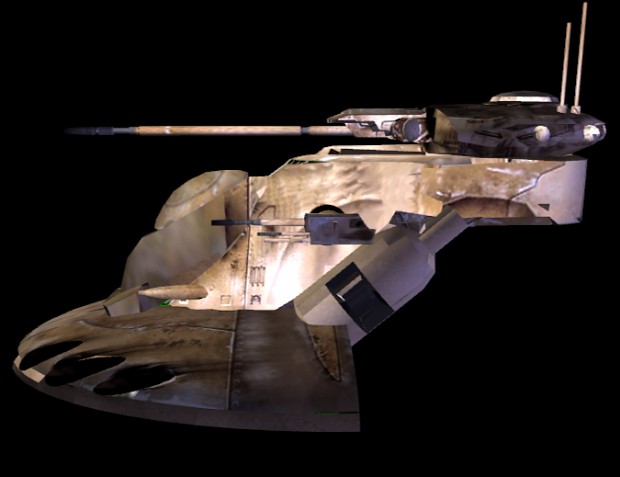 But the fun doesn't end there. Ozzy has been making some cool, new, animations for the AAT. So it'll have a firing animation and several death ones for realism :) ALSO all the turrets you see on the model have firing bones added to them. Including the cannon on the bottom center. Hopefully I'll get some real good projectiles for the AAT to make it look sexy.

But as we move on past the AAT, I figured I'll share a little glimpse at the unit list just to give everyone an idea of what to expect.


Anyways, that is going to be all for now. In the future we'll show off our Episode III style Venator :)

Blurrg trooper, where the one with the beast and the flame-giver ?

Bingo. However, they will be mixed with clones with blasters and flamethrowers (since in the Ryloth trilogy in TCW show, they had DC-15a blasters).

So is every unit going to have a unique death animation?

Yes. I want to make the battles look more exciting and feel real...

Well that sounds awesome, I just wish they made EAW2 already with an updated engine cause after playing Company of heroes and then coming back to EAW its like going back in time.