We are happy to announce many new updates for Lost Haven. In this article we are going to be talking about Combat combos, our UI design, art creation for some of the main characters including the male protagonist and AI.

Posted by FishCommander on Jan 8th, 2017

At the end of this last development sprint, we sat down as a team and took stock of which pieces of our game have been completed in some form, and which pieces we had yet to tackle. We were pleasantly surprised to see such good, quantifiable progress. Most of our driving features of our game are implemented to some degree, with only a few left before we can really start to see something complete and playable.

If you want to get a look at the prototypes we've finished already, previous dev blogs are a good place to start, but feel free to ask questions on the forums or Twitter as well!

We're getting very close to our first milestone, a code-complete technical demo of our game. We are so proud of our core team, our contractors, as well as the artists we're working with now or plan to work with soon, for getting us this far.

One of the artists we've started working with is Jenny Graf . She is experienced in many different artistic skills, and for us she is going to design the UI for Lost Haven. It's too early to show anything off, but we are thrilled to be working with her.

We also have a talented 3D artist that we are working with (Emma Salamanca) and she is just about done with our first official character model. He's one of the first characters you'll meet in the game, a stubborn older man determined to protect his family outside the safety of big city walls. We are very pleased with how he has turned out and hope to show him in action very soon. 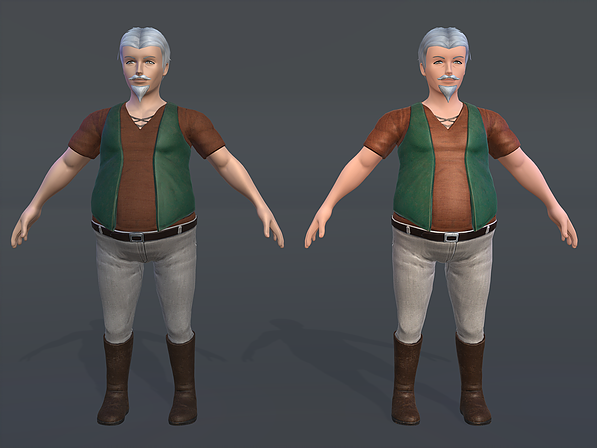 One of our big achievements in the last sprint was finishing another piece of the combat system: attack combinations.

Instead of just hacking away at an enemy repeatedly until it goes down, you can now combine your moves to form more powerful attacks. Right now we only have 2 different moves, as a proof of concept for the combat system, but we will expand on this to make varied, fluid combat.

Our next steps for the combat system are to work on different weapon types and improve some bits of code under the hood to add support for attacks and combinations to be moddable.

We have also expanded the combat system to include multiple weapon types, though we still need the animations to support the different weapon types. We also made a few code improvements to make modifying the combat system and available attacks easier for us and, in the future, to expose this functionality to modders.

As mentioned in the last dev blog, we are focusing on the NPC AI. Some of the work we did this sprint was under the hood. For example, we implemented some debugging tools to support visualization of the AI while it is running, as well as dynamic configuration of the AI pathfinding grids. By visualizing the AI, we can see which decisions the NPC is making, why those decisions were selected, and identify any problems.

We also made some improvements to how the NPC reacts when they're being talked to, and integrated the AI with the dialogue system so that NPCs don't keep wandering off and doing their own thing when you're trying to talk to them. 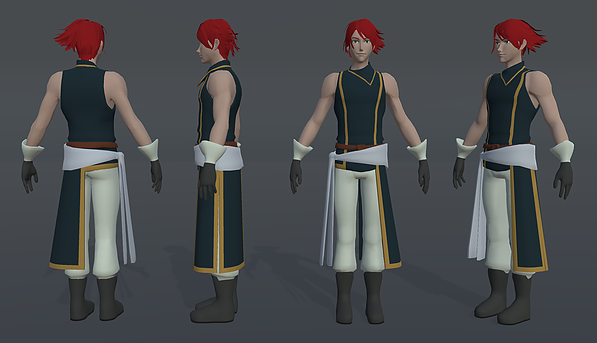 We were incredibly pleased with the completed Max model made by Emma in the last sprint, and she has now started on our next character, known for now as "Male Protagonist". He's the male version of our default playable character. We have plans to implement customizable playable characters for the full game, but since that is a relatively ambitious feature, he and our Female Protagonist character will be the stars of our technical demo. The image shown here is a work in progress; we will share the completed character model when he is finished.

We have also started to narrow down our vision for UI design with Jenny. We have started determining the style and tone of the UI that we want, as well as hammering out the flow that takes a player through different menus and actions.

We are going to maintain our focus on NPC AI, since a thriving and realistic community of NPCs is at the heart of Lost Haven. We have several things we are hoping to accomplish with the NPC Combat in our current sprint. We also have plans to work on incorporating another main feature of Lost Haven: relationships and social interactions with NPCs.