Lost Haven is a single player farming, fighting, town simulation, relationship building Action-RPG (whew) taking inspiration from Harvest Moon and Rune Factory style games. It will allow you to farm and care for ranch animals. As you sell more and progresses new citizens will arrive and the town will be built up from virtually nothing. You’ll be able to form relationships with townsfolk, and even date, and eventually marry one of the town’s eligible bachelors/bachelorettes. From there you’ll be able to have and raise a child with your spouse, and as the little bundle of joy grows up he/she will be able to help you with your chores.

You’ll also need to fight monsters to clear land for development. All monsters in the area will need to be defeated, and in most areas a dungeon cleared. The farther from the town center, the more difficult and high level the monsters will be, the bigger the challenge, and the greater the rewards.

Lot's of updates for Lost Haven

At the end of this last development sprint, we sat down as a team and took stock of which pieces of our game have been completed in some form, and which pieces we had yet to tackle. We were pleasantly surprised to see such good, quantifiable progress. Most of our driving features of our game are implemented to some degree, with only a few left before we can really start to see something complete and playable.

If you want to get a look at the prototypes we've finished already, previous dev blogs are a good place to start, but feel free to ask questions on the forums or Twitter as well!

We're getting very close to our first milestone, a code-complete technical demo of our game. We are so proud of our core team, our contractors, as well as the artists we're working with now or plan to work with soon, for getting us this far.

As mentioned in the last dev blog, we are focusing on the NPC AI. Some of the work we did this sprint was under the hood. For example, we implemented some debugging tools to support visualization of the AI while it is running, as well as dynamic configuration of the AI pathfinding grids. By visualizing the AI, we can see which decisions the NPC is making, why those decisions were selected, and identify any problems.

We also made some improvements to how the NPC reacts when they're being talked to, and integrated the AI with the dialogue system so that NPCs don't keep wandering off and doing their own thing when you're trying to talk to them.

We have also expanded the combat system to include multiple weapon types, though we still need the animations to support the different weapon types. We also made a few code improvements to make modifying the combat system and available attacks easier for us and, in the future, to expose this functionality to modders. 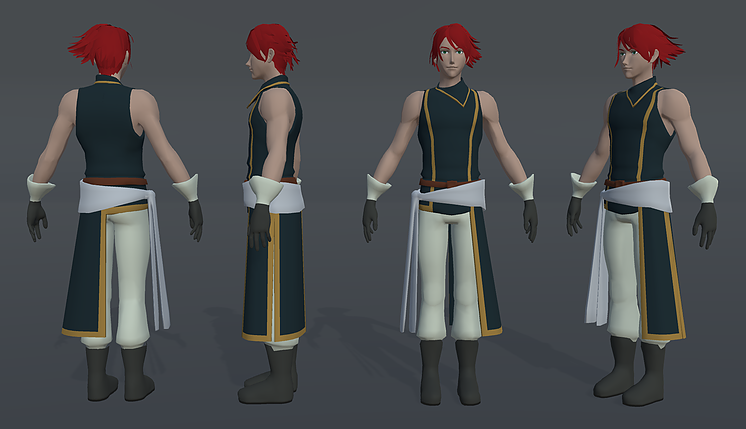 We were incredibly pleased with the completed Max model made by Emma in the last sprint, and she has now started on our next character, known for now as "Male Protagonist". He's the male version of our default playable character. We have plans to implement customizable playable characters for the full game, but since that is a relatively ambitious feature, he and our Female Protagonist character will be the stars of our technical demo. The image shown here is a work in progress; But voila! here he is done! 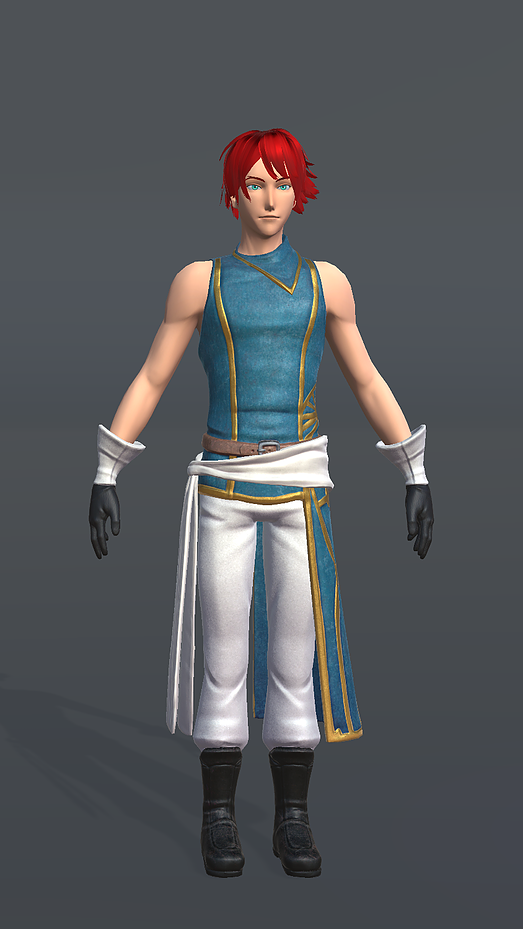 We have also started to narrow down our vision for UI design with Jenny. We have started determining the style and tone of the UI that we want, as well as hammering out the flow that takes a player through different menus and actions.

Our next character on the list is Rachel! Keep an eye out for a preview of her character model very soon. If you don't want to wait, you can see the concept art for Rachel, our Female Protagonist, and the other characters starring in our upcoming demo in our gallery on Lost Haven's page.

We also finished off some important AI planning. For the past few sprints we have been thinking and talking about how we want our NPCs to behave and how we can make those ideas happen. This past sprint we finally compiled our thoughts into a solid plan, and will be knocking out these chunks of AI functionality over the next few sprints.

We started with combat.

Our baddies can now detect NPCs that are near them and will begin chasing. It's a slow chase right now, since we haven't hooked up running animations for mobs/NPCs just yet. We can pretend it's an homage to old horror film villains, or maybe It Follows.

Next up for combat AI is refactoring the combat system so it can easily be triggered by the AI code and we can get some swords swinging.

Rachel is done, she looks great, and she's been integrated into the game. Of our main characters, this just leaves Ida, and our Female Protagonist! 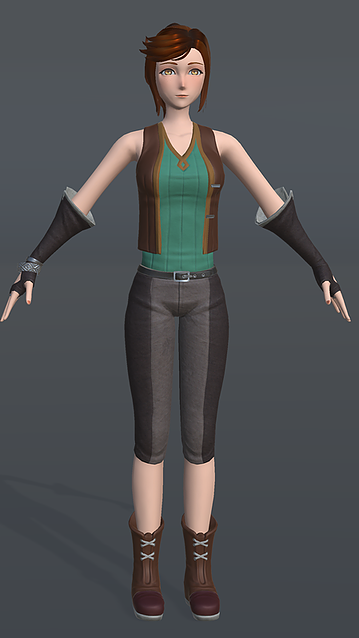 A charming explorer, who can be a bit clueless at times, Dino is one of the bachelors of Lost Haven. 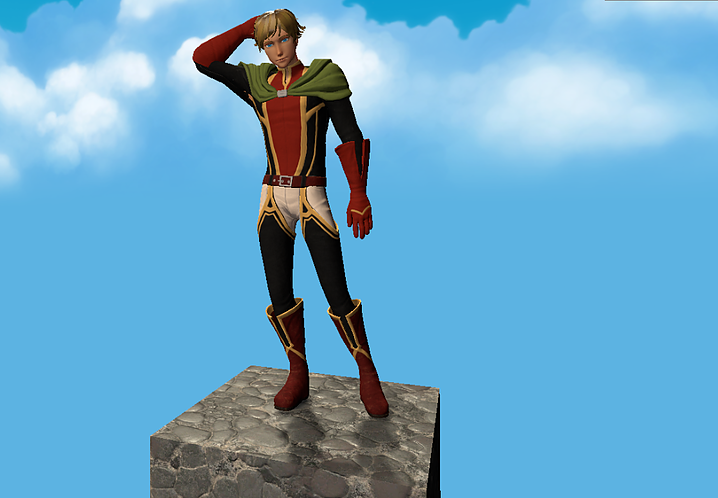 Huge improvements were made to the combat AI for enemies. Before, enemies would chase their targets, attack relentlessly while standing in one place, and then repeat once the target was dead.

Now, enemies will move more tactically. They take time between attacks, sometimes opting to get a better angle on their foe. Additionally, they will leave openings for other mobs to fight alongside them. The combat, as a result, is a lot closer to the fluid and realistic feel that we are aiming for.

Another piece of the combat system that was completed during this development sprint: Death and damage. NPCs of all kinds can now die, and react visibly to taking damage. The damage and death animations both are directional, and will look different depending which side the character was attacked from.

Some exciting news, in the past few weeks we have started working with our voice actors and voice director for the Lost Haven demo. We don't have anything to show off just yet, but we are really pleased with how things are going and can't wait to reveal more.

But, before we actually integrate the character audio, we need dialogue text. Probably one of the most thankless jobs to date, one of our devs powered through days of tedious data entry to get all of our dialogue entered into the Dialogue System. 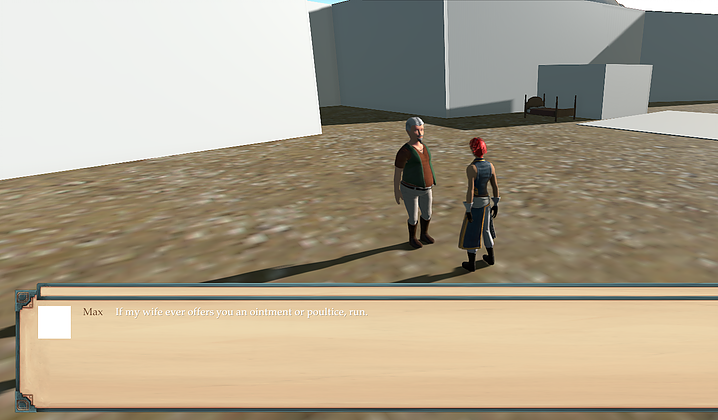 We also completed some more technical stuff. In order to support modding once the game is released, we use JSON for many of our data-storing needs. One of the big things we got done this sprint on the more technical side is researching and implementing schemas for our JSON files. We now have deep nested schema referencing. Hooray!

There was also a great deal of refactoring done on the character pathfinding, to decouple it from the AI. This makes it easier to direct NPC movement from the AI, and it's just a better software development practice.

We like to sprinkle in refactoring and bug fixes as we go, so the code is always improving and little mistakes don't get left behind as we develop.

One of our goals for this next sprint is to create more stuff for our NPCs to interact with. The priority so far has been to implement the NPC behaviors, and we have included just enough to demonstrate and test those behaviors. Now we are ready to add variety and detail to that system, filling the NPCs' lives with things to do. 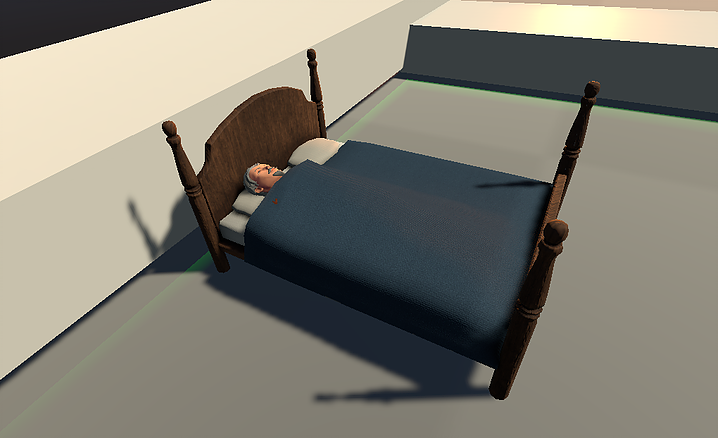 In the next few months, as we near our target date for the demo, Lost Haven will start to take on the style and visuals we have planned that we haven't been able to show you yet. We've already made some adjustments to our sky/weather system, added water to Lost Haven, and made some stylistic tweaks to the graphics settings.

Our 3D modeler, Emma, will be finished with the characters for the demo very soon, and we are working diligently with Jenny to design a sleek user interface. In addition to that, we also have plans in the works for more animations, music and sound effects, and more work on our story, quests, and dialogue. 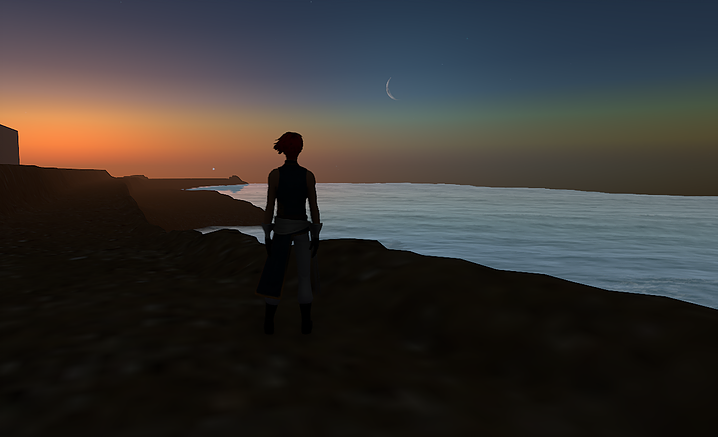 Some of these roles have already been filled, but if you are a professional in the game industry, you can see all the jobs we are currently hiring for at Savatronix.has-jobs.com.

What is Lost Haven all about? This article talks about the various features we plan to include in our game (some of which have already been implemented...

We are happy to announce many new updates for Lost Haven. In this article we are going to be talking about Combat combos, our UI design, art creation...

Beginnings of combat with Questing and AI Overhaul

We've finished one very busy development sprint and a new one is underway! 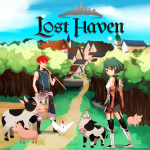