A new beta release of Might & Magic: Heroes 5.5 is ready for download to provide bug and balance fixes.

Our beta 5 release was a technically complicated one, so some bugs were almost unavoidable,
but thanks to the community's swift input and feedback we have been able to sort them out very quickly. Since a substantial amount of balance changes was also discussed and implemented forthe new larger standard battlefield size of 14x12, the new release is already named Beta 6.

All in all we have 3 things to announce:

1. The Beta 6 upload with fixes and balance improvements for larger battlefields. Download the mod and also the Manual was updated right away.

2. The start of a H55 compatible maps database on discord, currently containing 19 maps with the intention to expand it over time. These maps are checked for bugs and compatibility issues with the mod. (If you don't want a discord account, you can still move in as guest, grab what you need and leave)

3. A makeover of our old package of reshade settings has been updated to work with the latest version and offers much better performance with Adaptive sharpening, MXAO and SMAA. (credits: ThGryphn) 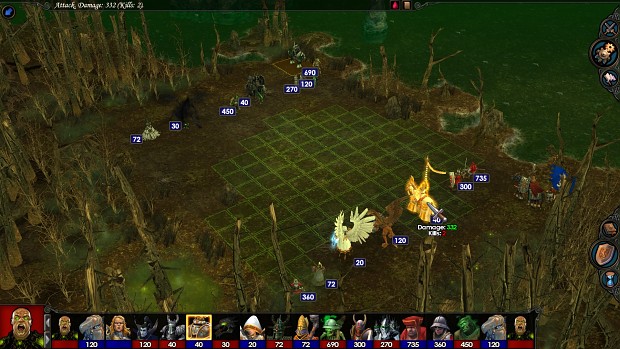 After release of Beta5b a lot of feedback was provided on the balance on new larger battlefields and some issues were overlooked and have been fixed in this version. The problem was that offensive creatures with 6,7 or 8 speed have become very similar, causing mostly the faster upgrades to become weaker compared to the slower one (that was buffed in another area).

In Beta 5b with large battlefields it became:

So if each faction would have one of the 8 speed creatures get 9 speed and some of the 7 speed get 8, there would be more meaningful differentiation again as in:

10 speed isn't used as we prefer to improve on the tactical preparation elements of the battle, compared to small battlefields.

-+1 speed to all following tiers: Haven T6,T7 + Inferno T5,T7 + Necro T7 + Fortress T6 +
Dungeon T4 + Stronghold T6 + Academy T5 + Sylvan T5
-added some minor buffs to primary skills of T7 upgraded for Stronghold, Sylvan & Dungeon since they started to lag behind after all bonuses to other T7
-added +2HP to Sylvan T2 (sylvan didn't get much buffs compared to other factions)
-added +2HP Inferno T3 (suffered from larger battlefields)
-made some minor adjustments to most unupgraded T7 and some unupgraded T6 to make sure they are not too strong/weak compared to the upgrades (logical stats) 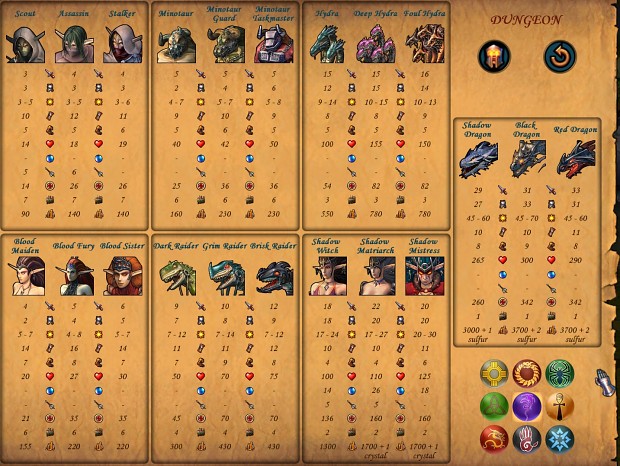 -Slightly lowered creature amounts in Battle sites early game since now stats are better adjusted to large battlefields, in very late game there will be a little more.

Screen of maplist under construction, visit channel 'compatible maps' and 'submod maps', please read the pinned messages there before downloading anything: 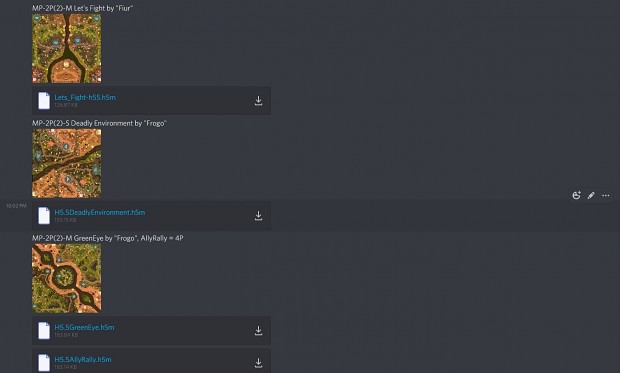 Here are some screenshots 1st before and 2nd after: 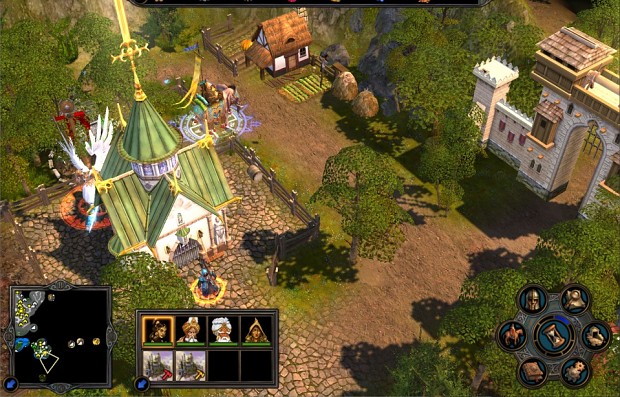 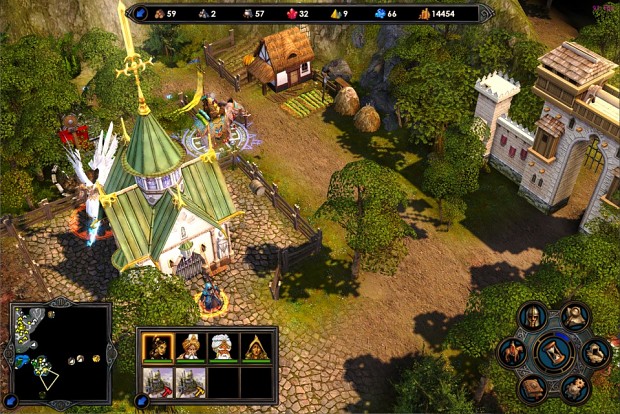 I dont know why but when i play single player against AI, he sometimes leaves treasures behind even tho he defeated neutrals. Any oppinions on this?

Thank you for reporting. This is a known issue, currently there is nothing we can do as this is hardcodded in the game exe.

Game crashes on green AI
save:
Drive.google.com
solution in DEP

I just started playing the 5.5 mod and it's truly great!

I would just like to report a bug: Whenever I start a map with inferno faction the game crashes

I played the game and some point while AI turn the game keeps crashing and i can't play that save. I tried disabling DEP but it didn't work. Can somebody help me? Is will be there a new version wich will fixes the game crashes?

Which EXE do you use to play the game?
How large is the map (with/without Underground?)
How many AIs?
Single player or multiplayer?
Try:
- disabling antivirus
- running the game as administrator

Thanks for the fast answer!

Map size is impossible and without underground, i like to play that size of maps and i played other impossible map before with underground and there was no problem.

The map is starting with 8 AI but i already defeated some of them, i'm not sure how many exactly.

I have no antivirus only the windows defender, what i don't want to turn off.

I tried running as administrator but when i start the game like that i can't even load the save because it says the map is deleter or the save file is corrupted. But when i start it in normal not in administrator, i can load it i play it but after my turn when AI plays it crashes.

We may have found the issue and will fix it in the next release. It seems if flaming arrows and Counterspell are used in the same game it crashes. Having that much AIs make it very likely that this may have happened because of the number of heroes available on the map.

Was the bug with artifacts store fixed?
On huge maps AI players cannot build it, but they can capture your town with it. And in some conditions when AI try to use artifact store in captured city - game will crash. And loading will not help

This was fixed. When AI takes a town with Artifact store, the mod will destroy the building.

Game will still crash on this version when using the Counterspell Hero ability, previous version I reported the same but it does still occur

we know about that bug in RC14B6 it will be fixed in the next release!

Hi, I started playing this mod and really liked, but when I tried to play the map "The Cup of Thunder", the AI is supossed to attack me since the beginning, but no one showed up months. Is this mod compatible with these scenario maps or only works in "defeat all"?

This can be 1 of 2 scenarios causing this:
1. MMH55_64.exe AI is different and uses AI hero profiles. We have found out profiles can be Builder, Explorer, Defender, Warrior etc.. Some of the profile are bugged and the hero behaves weird sometimes (does not pick artifacts or collect resources). This is unfixable as the AI is hardcodded. Try using the old AI by using MMH55_Utility_64.exe to play the game/map.

2. AI strategy - it can be offensive or defensive. If defensive is the one chosen AI does not initiate attack on the enemy and just sits and grows army. AI strategy can be explicitly set in the game lobby. Just scroll through the starting bonus resource for the AI player until you find the Offensive/Aggressive strategy style.

May I know how to generate maps to include water? There is only option to make underground absent or present, but cant seem to find the option for water.

Go to MMH55_Editor_64.exe -> Tools -> Advanced RMG.
There is a checkbox for Water, use it.
Once the map is made run it through the Mapmixer utility to populate the water part of the map with items and make it more playable.

Note: Original editor was lacking good understanding of generating water maps, mapmixer aids this to some extend but still you can bump into some issues.

Hello, I dont have any object visible in the tool bar in editor so i cant really edit anything.
Please help

Try run the editor as administrator (right click on the exe -> Run as Administrator).

I tryed that, no changes. if i remember correctly the base game could have the same problem, but i cant find any solutions.
thanks for the quick reply

Try going into <Game folder>/data and delete RMGTemp folder and index.bin file if such exist. Then try again.

Thank you so much, it helped.
Me and my brother love this mod btw

Great mod! However, I have an issue wen using town portal via Town management.

I played an 8-player hotseat, using the 64bit exe version on a mapmixed map.

When I use town portal in the above-described way, it functions normally, but afterwards, I can no longer open the heroes properties/inventory by double-clicking on the hero's portrait. Furthermore, whenever I end turn and the next player's turn begins, the map centres on the previous hero (of the previous player) who used the town portal. When I save the game, quit heroes and start it anew, the problem is still there when I load the game. It keeps being there for the entire further game, making it next to impossible to use town gate in said manner (via Town Management). However, using town gate "old fashioned way" still works. But that teleports to nearest town, while Town Management town portal allows teleport to any town with mage guild lvl 5.

Any way to avoid it, or any feasible work around? I also tried using the other 64bit-exe (forgot the name). Does not help, either...

I would highly appreciate any help! Thanks in advance!

Never seen this issue before but make sure the town you teleport into has its garrison empty before teleportation.