This is the dinosaur tank class. The T-Rex does two things, chomp and stomp. It is the most powerful dinosaur, the T-Rex is fear itself embodied in a massive form. 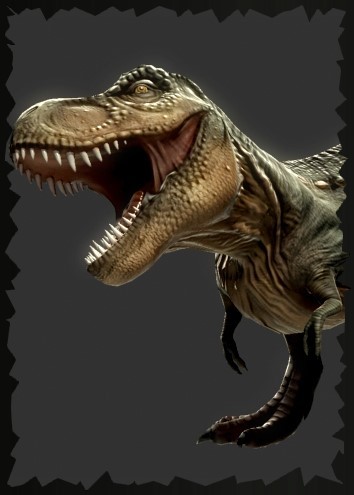 Pros:
Very high health
Extreme damage
Can be used as a distraction

Cons:
Large target, easy to hit
Audible from a distance
Hard to control


Tactical Summary:
This is the dinosaur tank class. The T-Rex does two things, chomp and stomp. It is the most powerful dinosaur, the T-Rex is fear itself embodied in a massive form.

The T-Rex will plow through any enemy in its way, it will even run down trees as if they were twigs. The T-Rex's massive jaws will tear apart any enemy and send them flying into the air like a ragdoll afterward.

Your only real opponent is the giant on the human side, the Heavy Gunner. Alone he is no match, but with a smart squad he can be the end of the T-Rex's rampage.

Bite: A bite that delivers colossal damage, throwing your prey into the air afterwards which causes falling damage if they managed to survive.

Head Butt: The Head Butt ability knocks players to the ground causing moderate damage and leaving them vulnerable to the stomp ability.

Stomp: An instant kill ability that can only be activated once a human player is knocked to the ground. The fatally player is crushed beneath the T-Rex’s mighty foot.

Roar: A loud roar that causes players screens to shake and blur wildly. It also makes their ears ring loudly for a few moments. 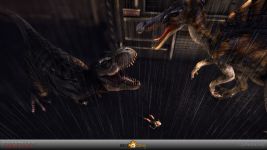 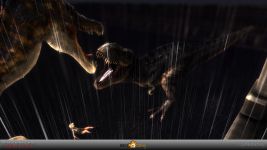 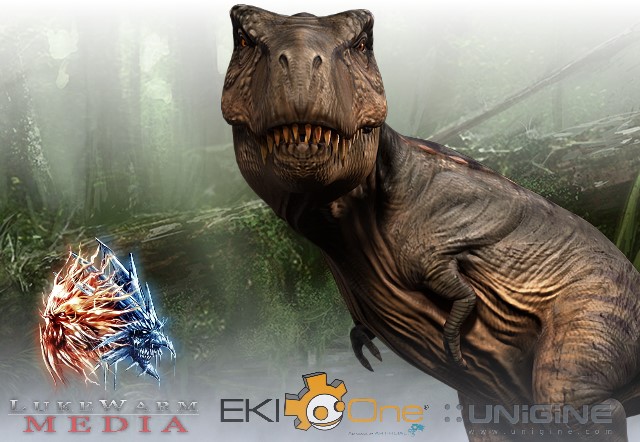 amazing! i will definately purchase this game when released. we need a good dinosaur game and this looks like it will meet my expectations, well done

You guys rock this freakin gerne

"Meet the Tank: T-Tex" a play on the words T-Rex and Tank, or a simple mistake? :P

And you guys don't gotta sell me on buying it, always had plans to *thumbs up*

I see what you did there XD

Does this make the Spinosaurus a dinosaur 'super-weapon', since IIRC, spiney slapped rex about like a little bitch in Jpark 3?

Having a whole team of T-Rexs would be funny, great job.

... or not if you're a t-rex and the humans have laid down land mines!

hahah yeah, it would be hilarious.

What I reckon would be an interesting game mode is T-Rex's all in Deathmatch mode, all having to fight for the human.
The human player gets a point for every 5 minutes he survives.
T-Rex's get several points for killing the player, and no points for killing one another.
The levels set up for this game type would contain lots and lots of little hidey holes for the player to hide in, and run around, but no area that the player would be out of reach from the T-Rex's.

It would be interesting to play as the human, I could imagine the blood pumping while scattering around all over the place to get away from the Rex's :)

Frickin Sweet. Although I think the Rex will win.

You know im not into alot of dino games ( except turok for the N64 I love that game) but this game has got my attention. The whole playing as a dino or person in multiplayer is just awesome. I can't wait for a beta/demo or even the finished game to come out.

there should be a battle mode like jurassic park warpath :D
that game rocked but it needs a next gen version :P

I cant wait for this game :(

Impressive for a 3 man team.

We are much bigger then a 3 man team, www.primalcarnage.com Click team page and you will see your team. We are a none-funded Indie team at the moment.

Looking forward to this game! Will definitely purchase. Looks like the most fun dinosaur game since one of my all time favorites Carnivores :)

no offence to be a buzzkill and i love it and all, but wasent the t-rex a scavenger rather than a hunter? i wacthed a few programmes and stuff and was wondering if it is true, but i heard their eye site is actually as good as ours i think, but to be in control of one just make this game awsome, great work guys!

If this game is as good as the movie Jurassic Park is... you will have at least 1+ sale. Excellent job guys.

AWESOME!!! this game just got better!

i really hope this game allows you to play a large majority of dinosaurs but besides that this game far beyond anything that i have ever encountered with that being said YOU GUYS ARE GODS WOOOOT I LOVE DINOSAURS !!!!!!!!!!!!!!!!!!!!